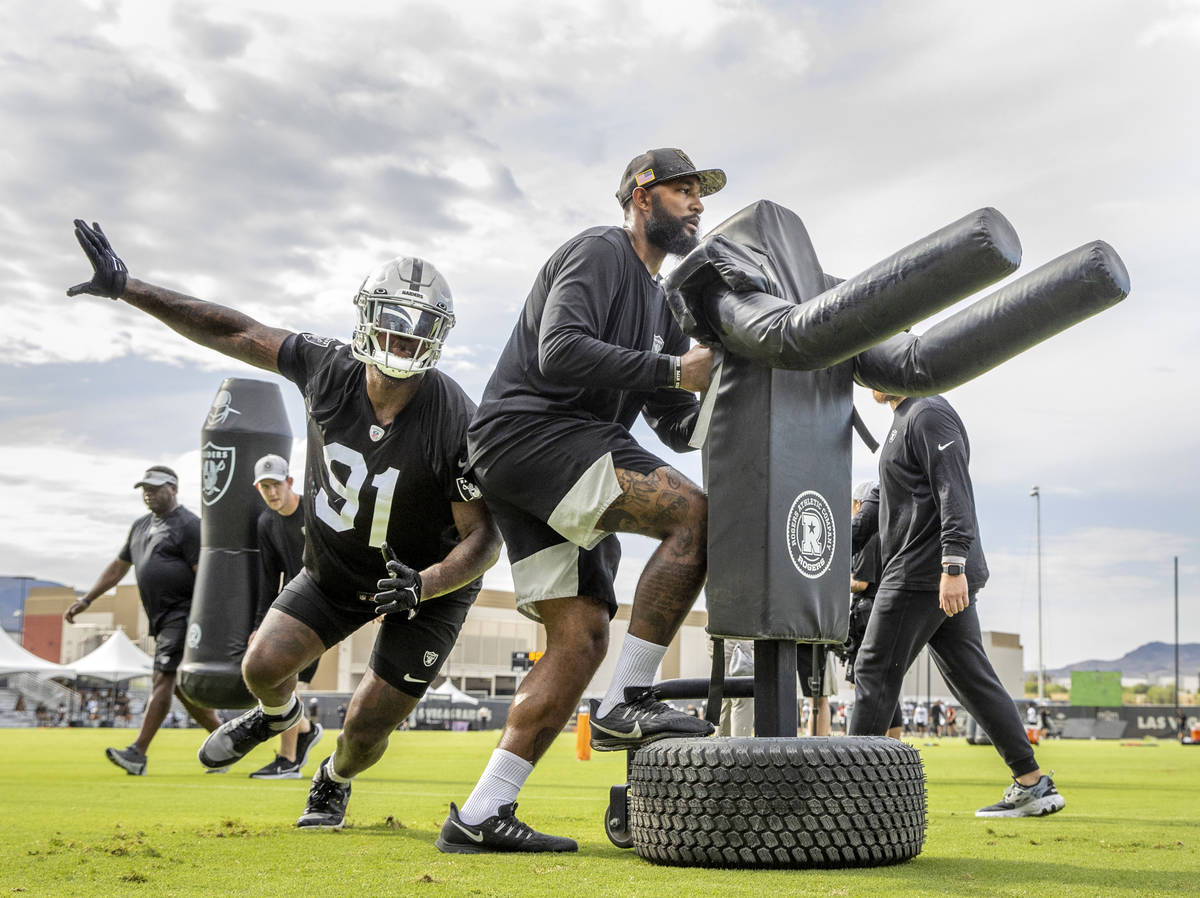 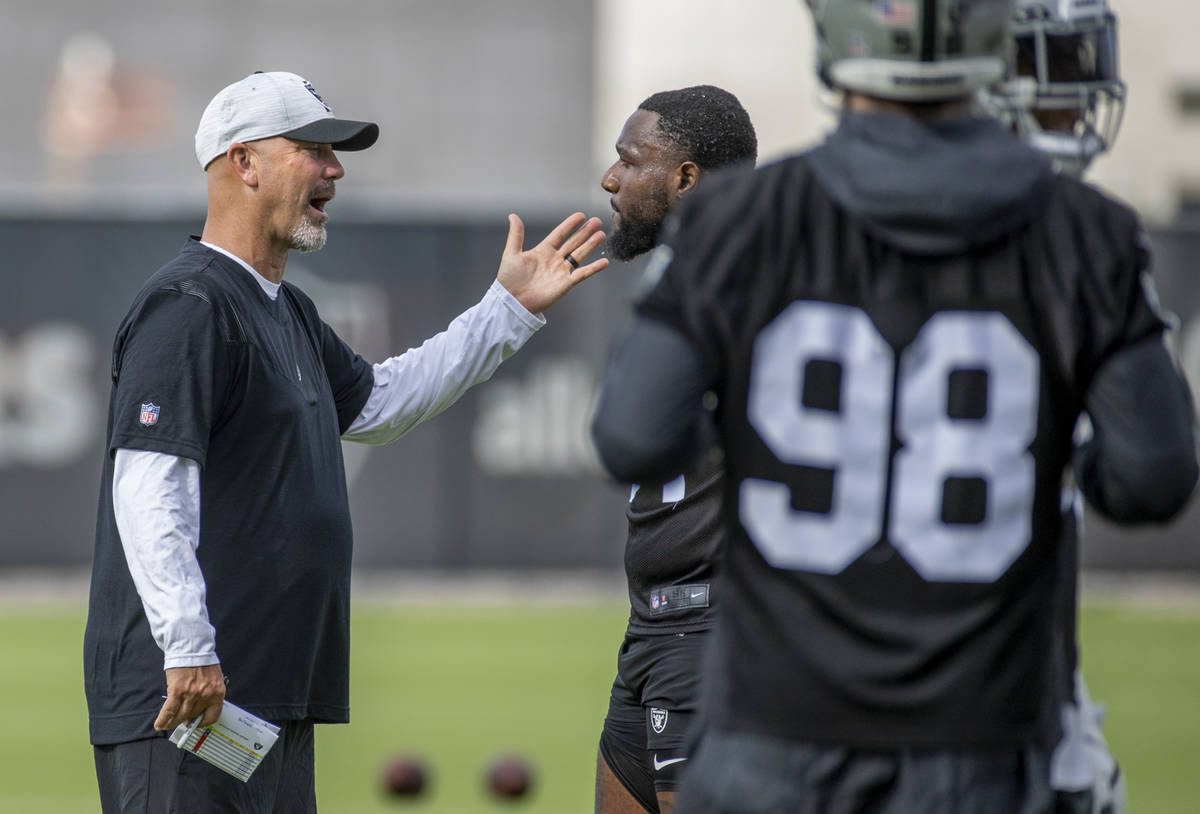 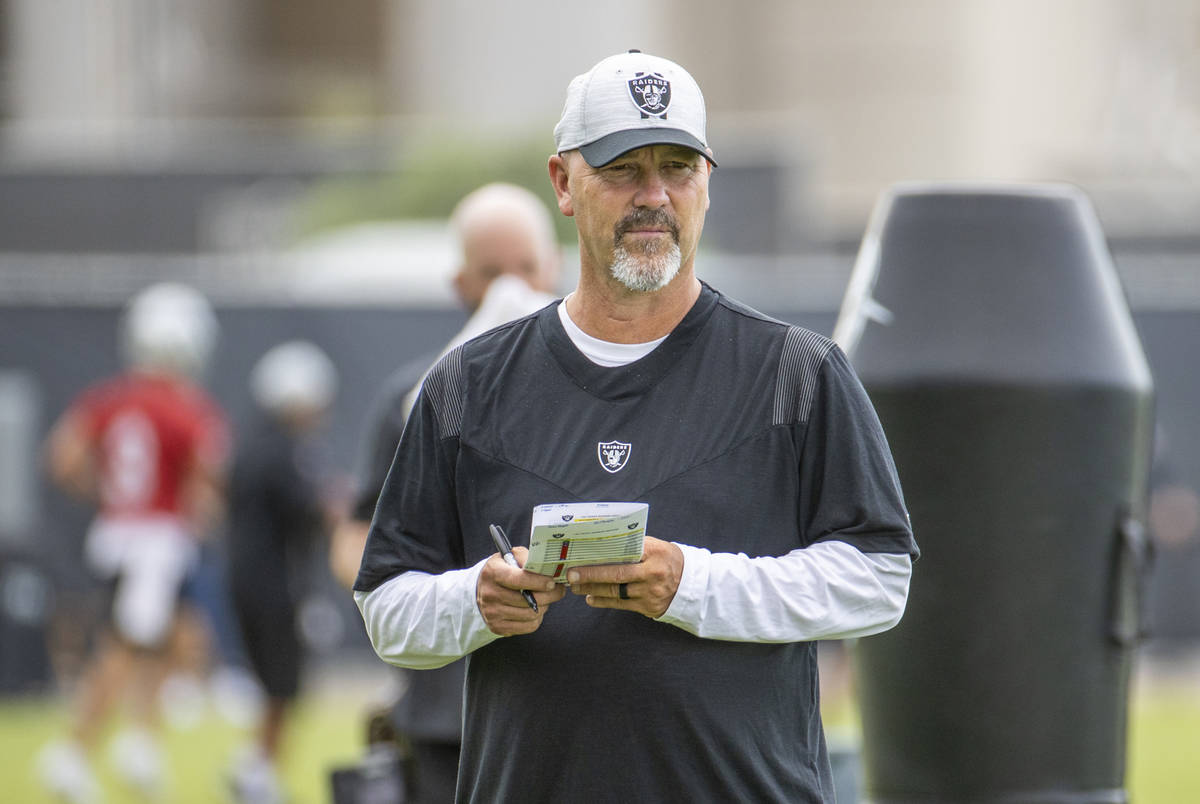 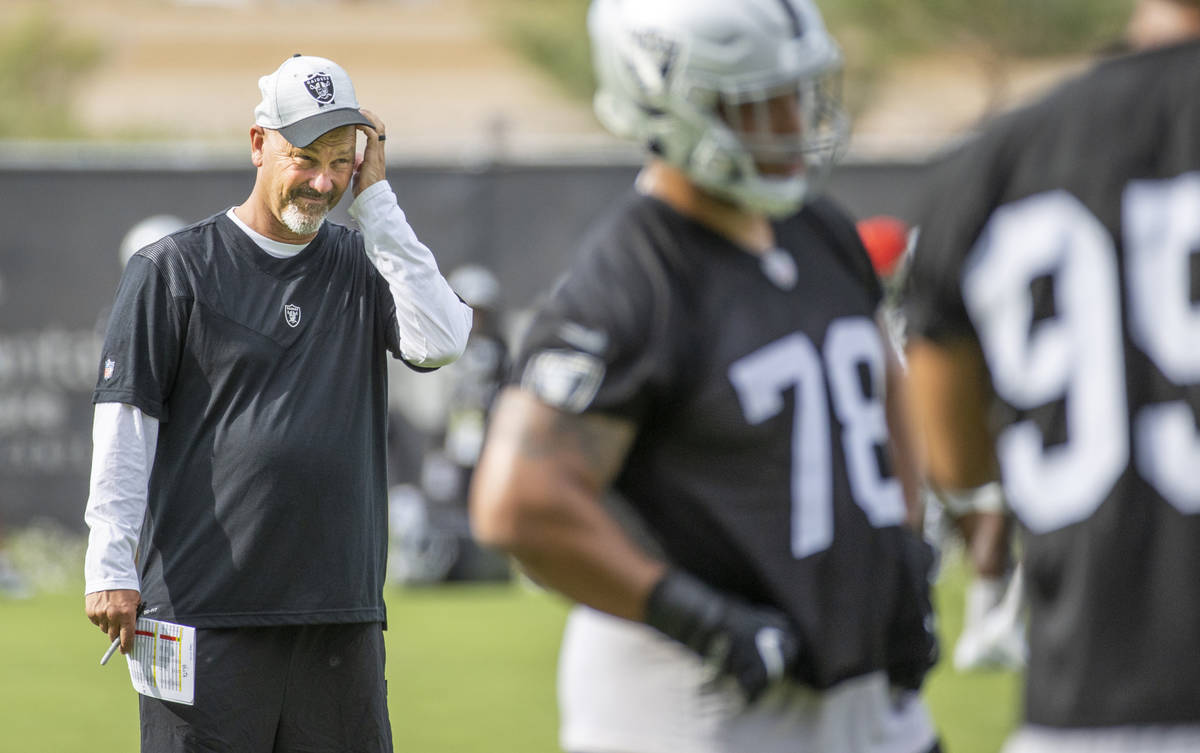 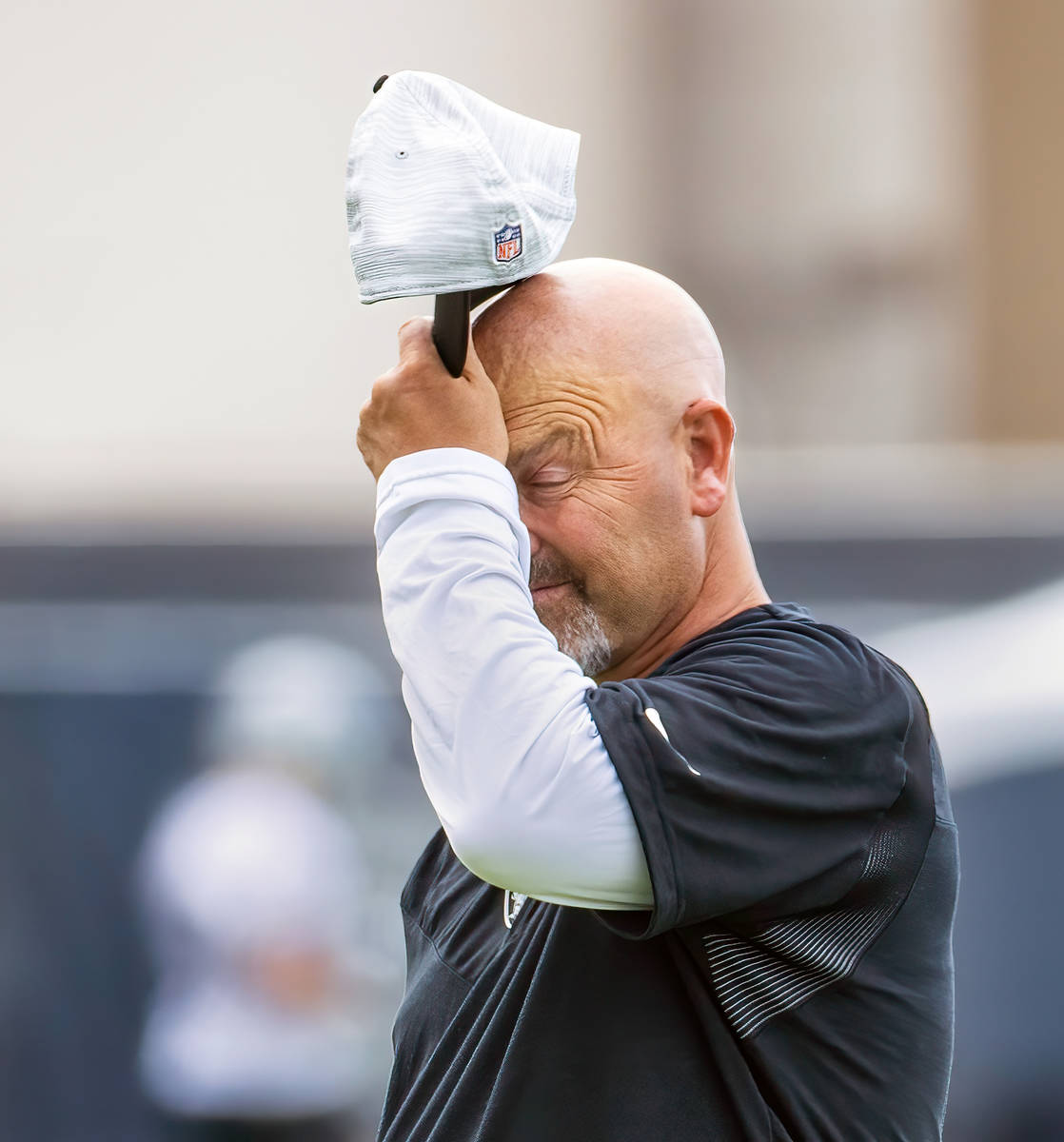 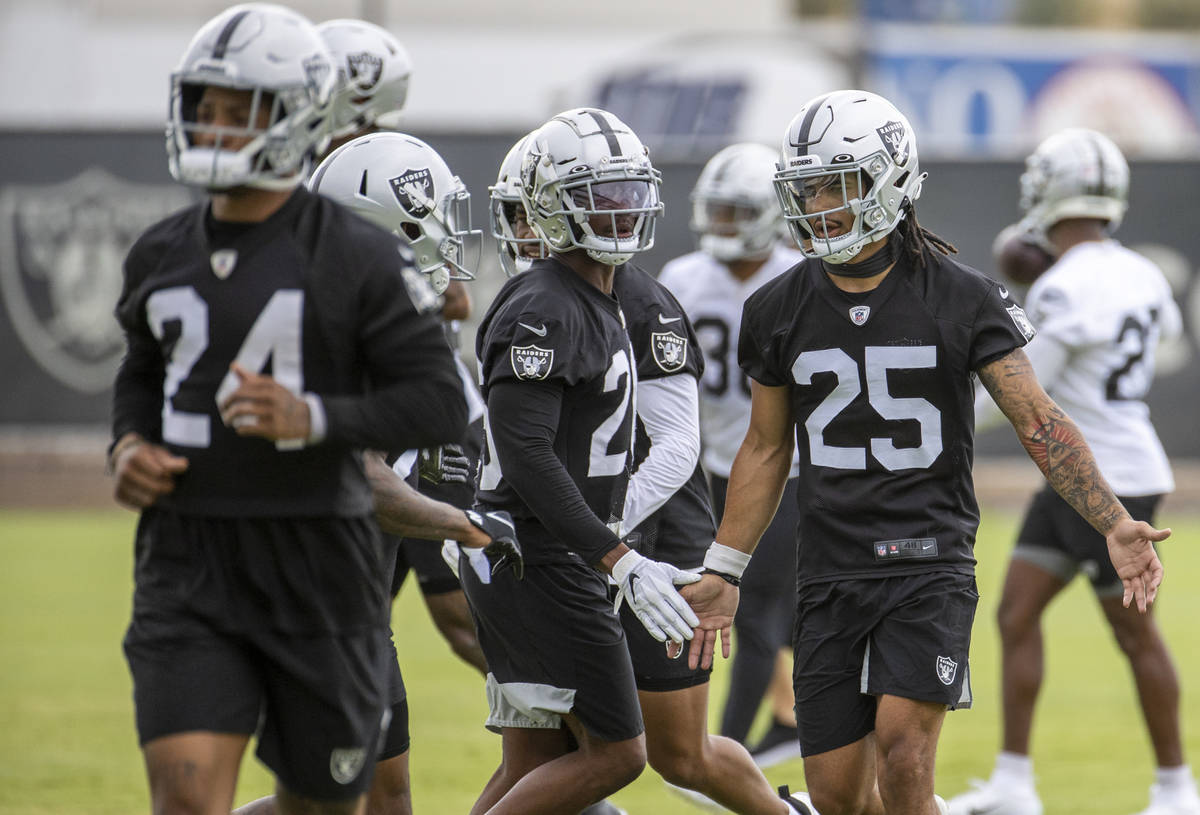 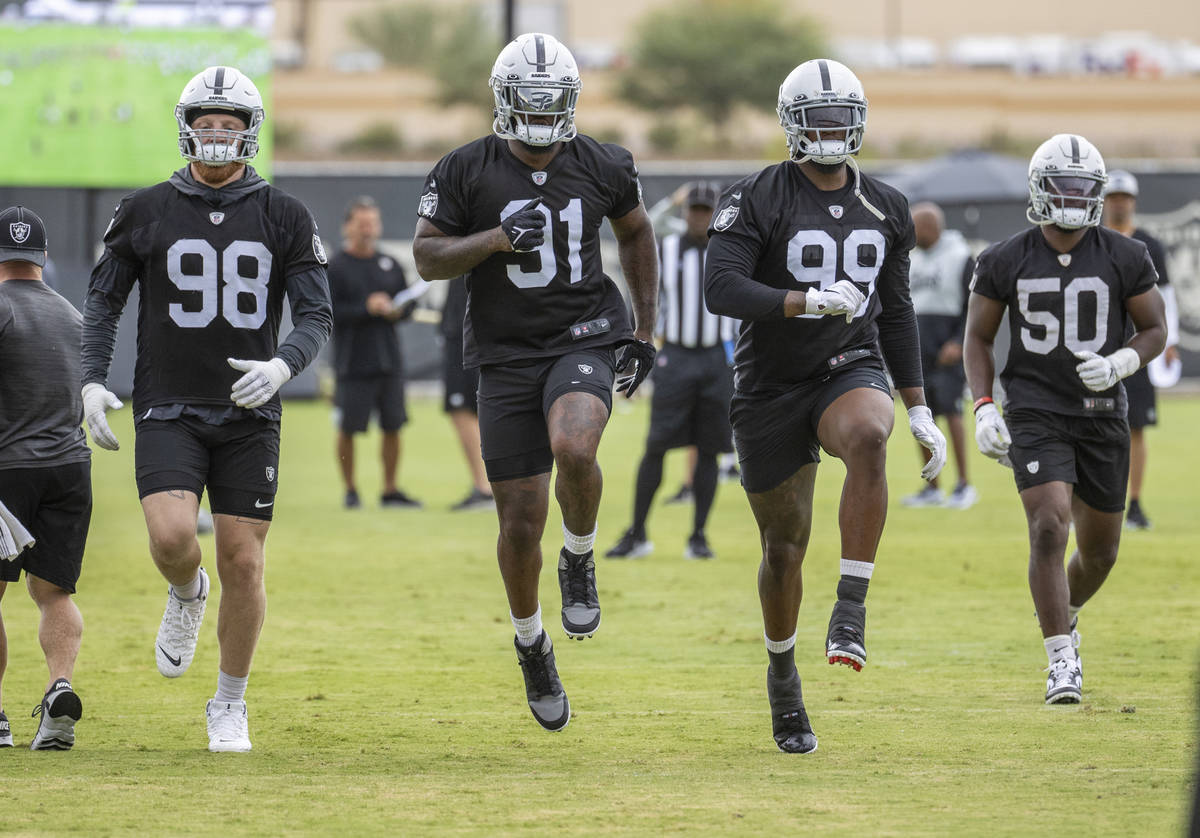 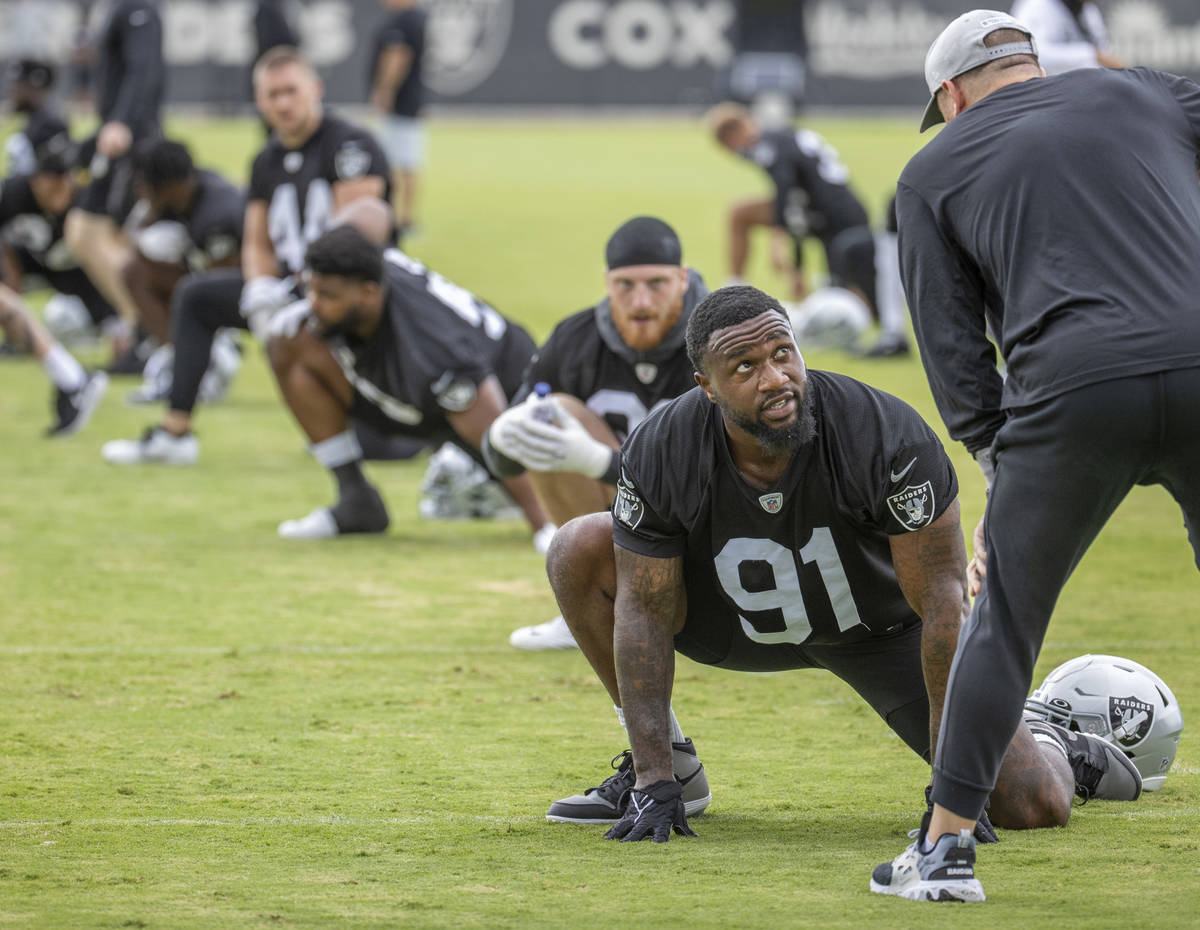 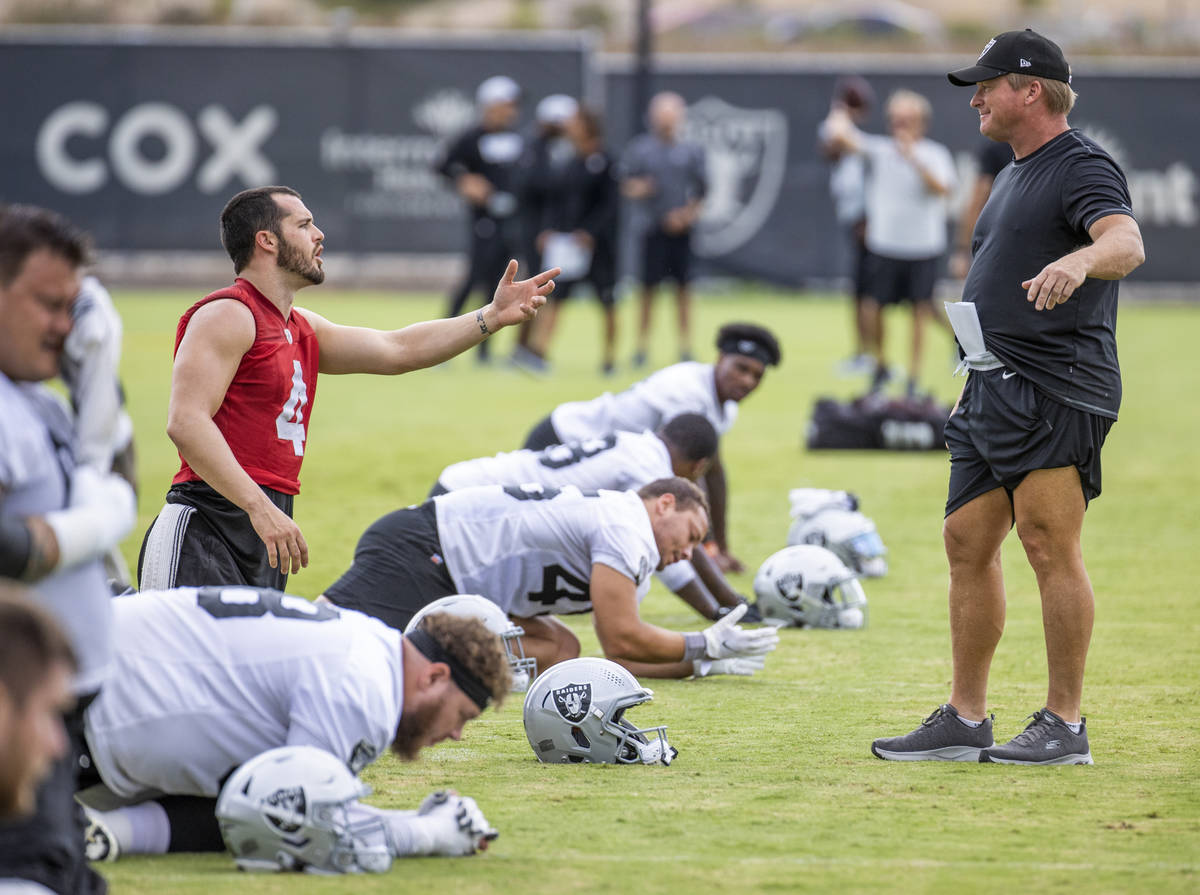 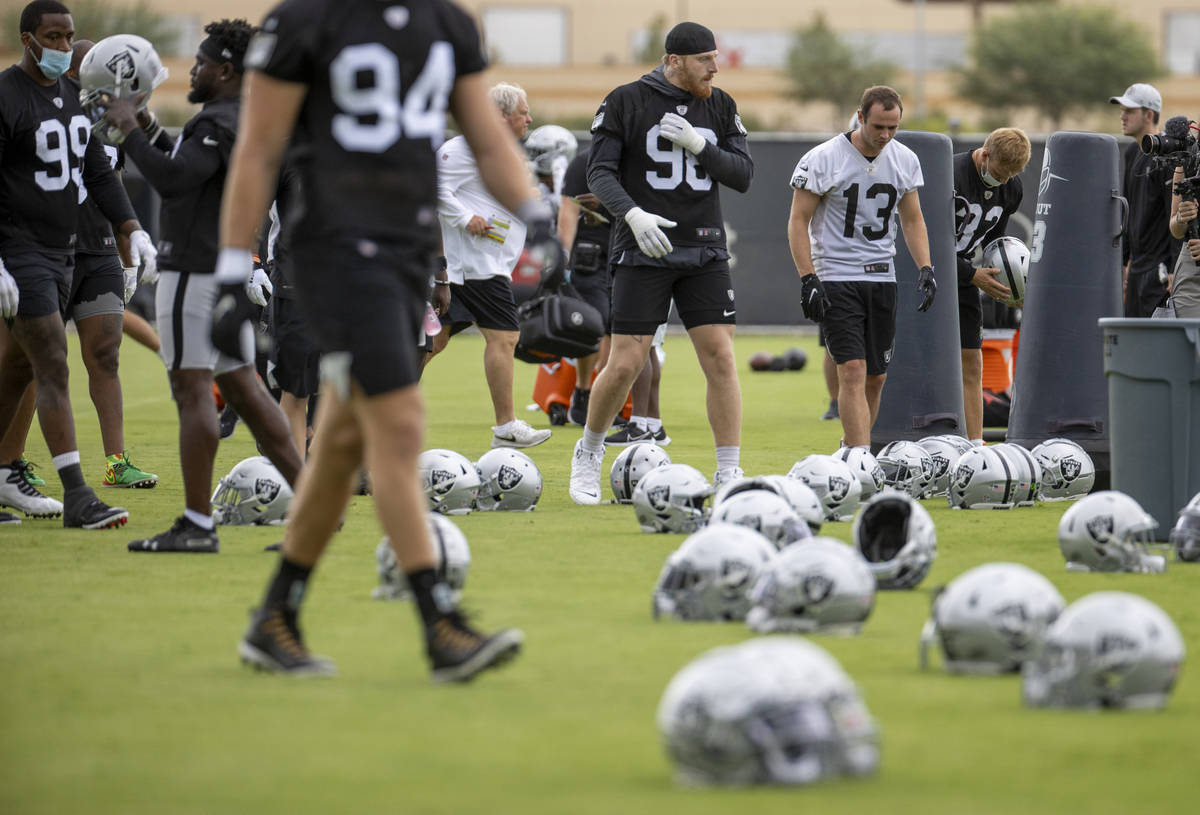 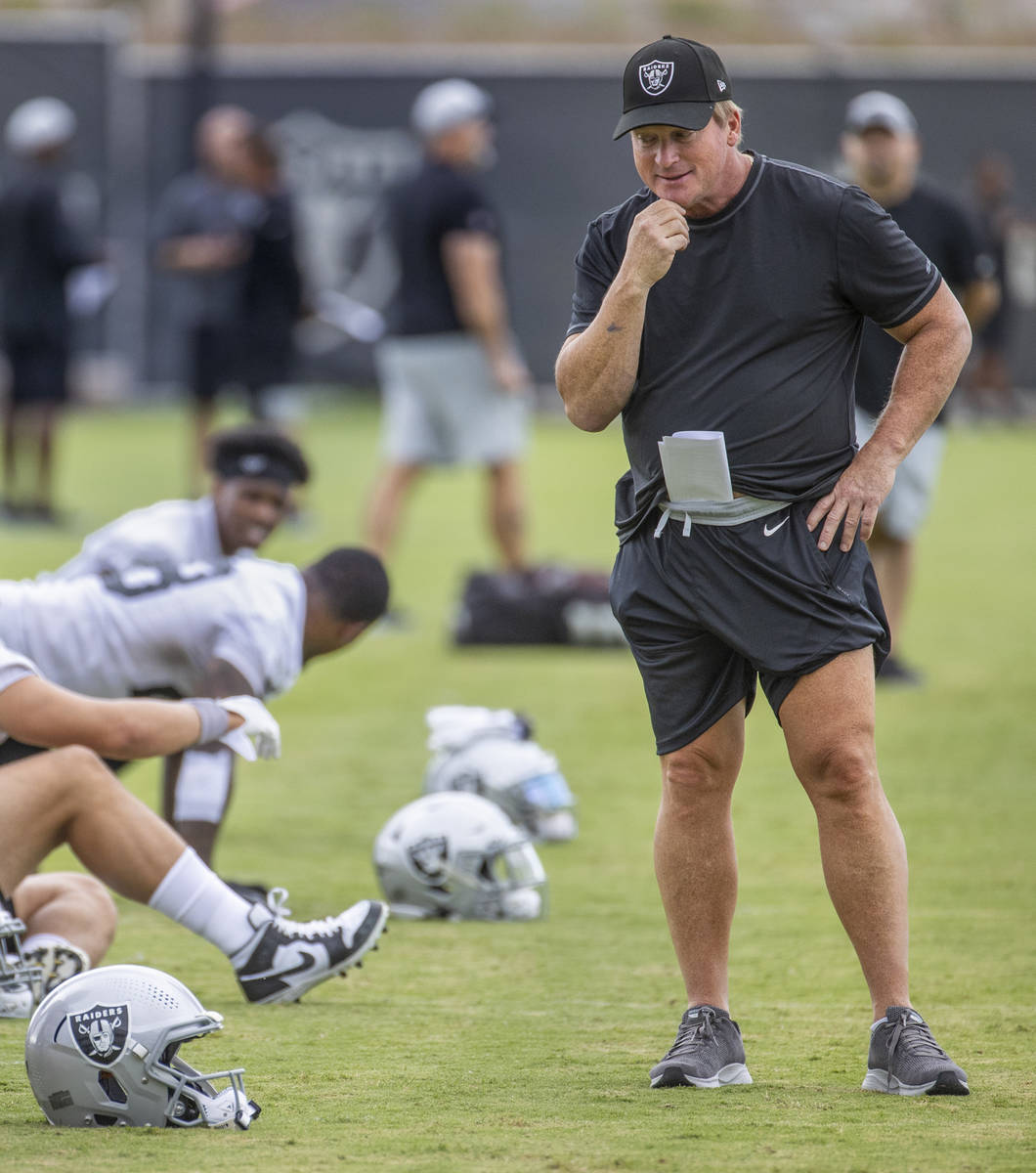 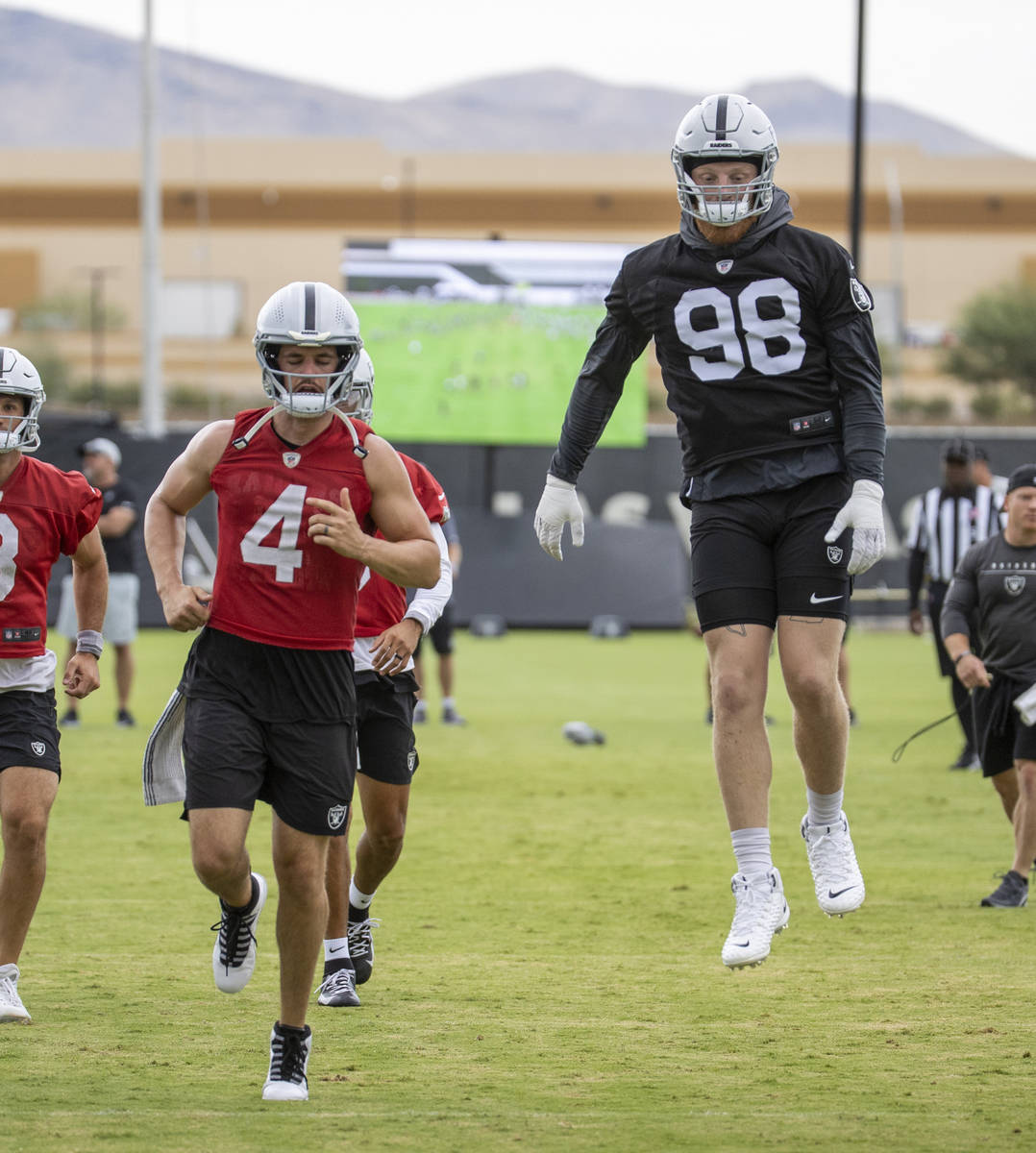 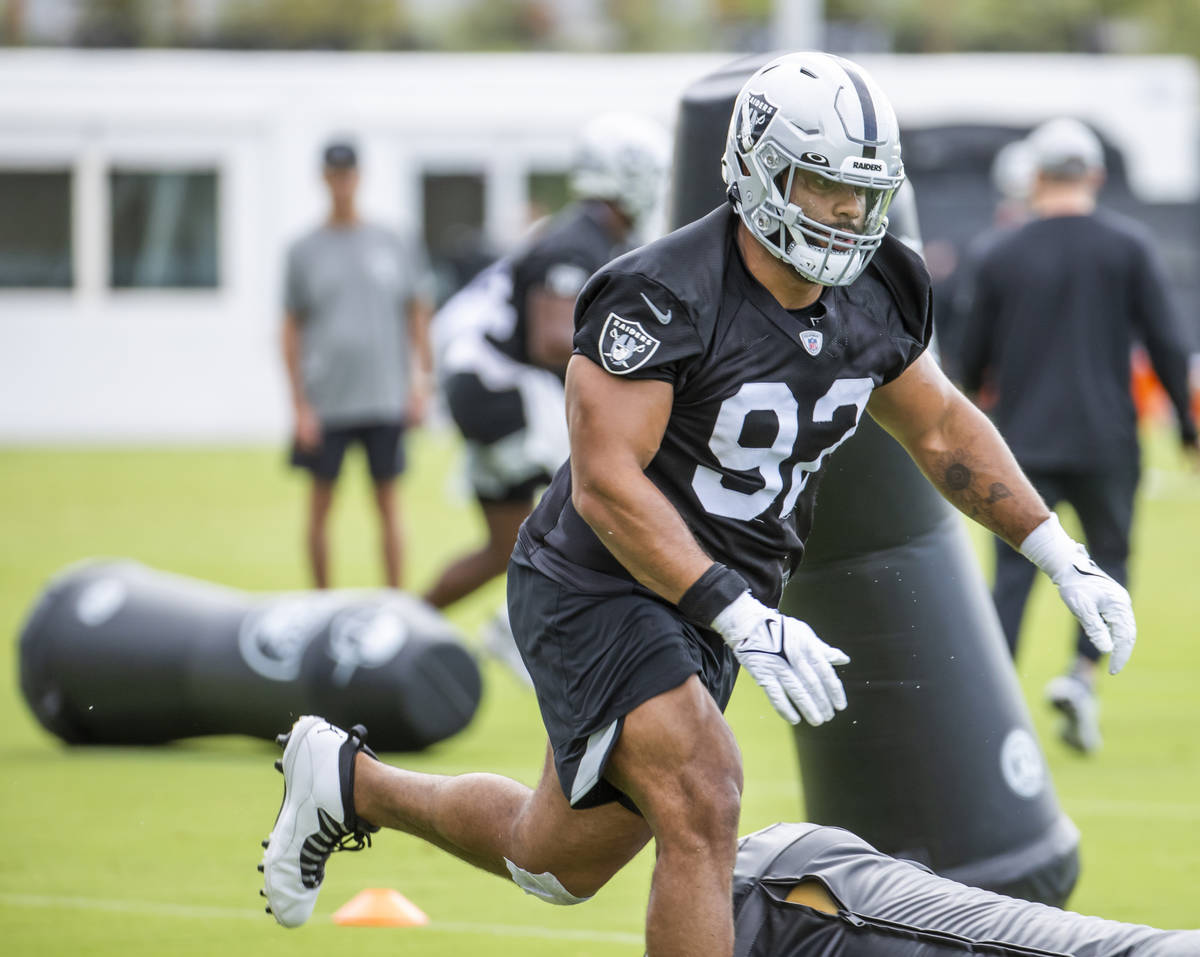 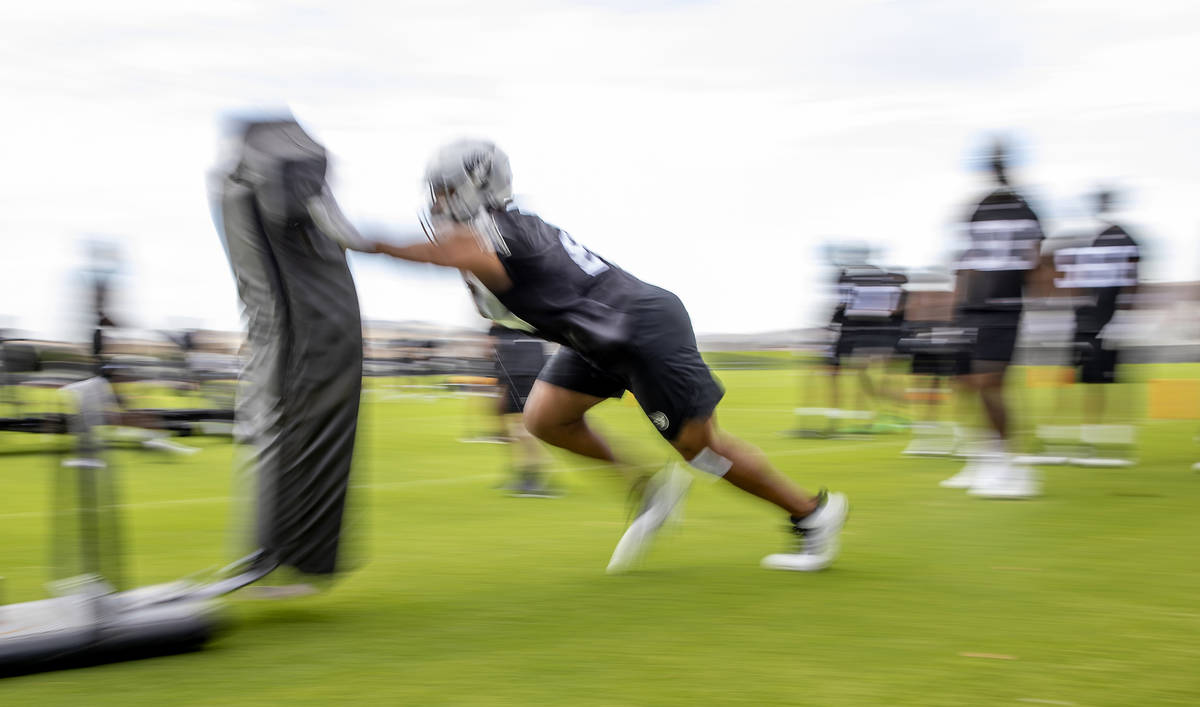 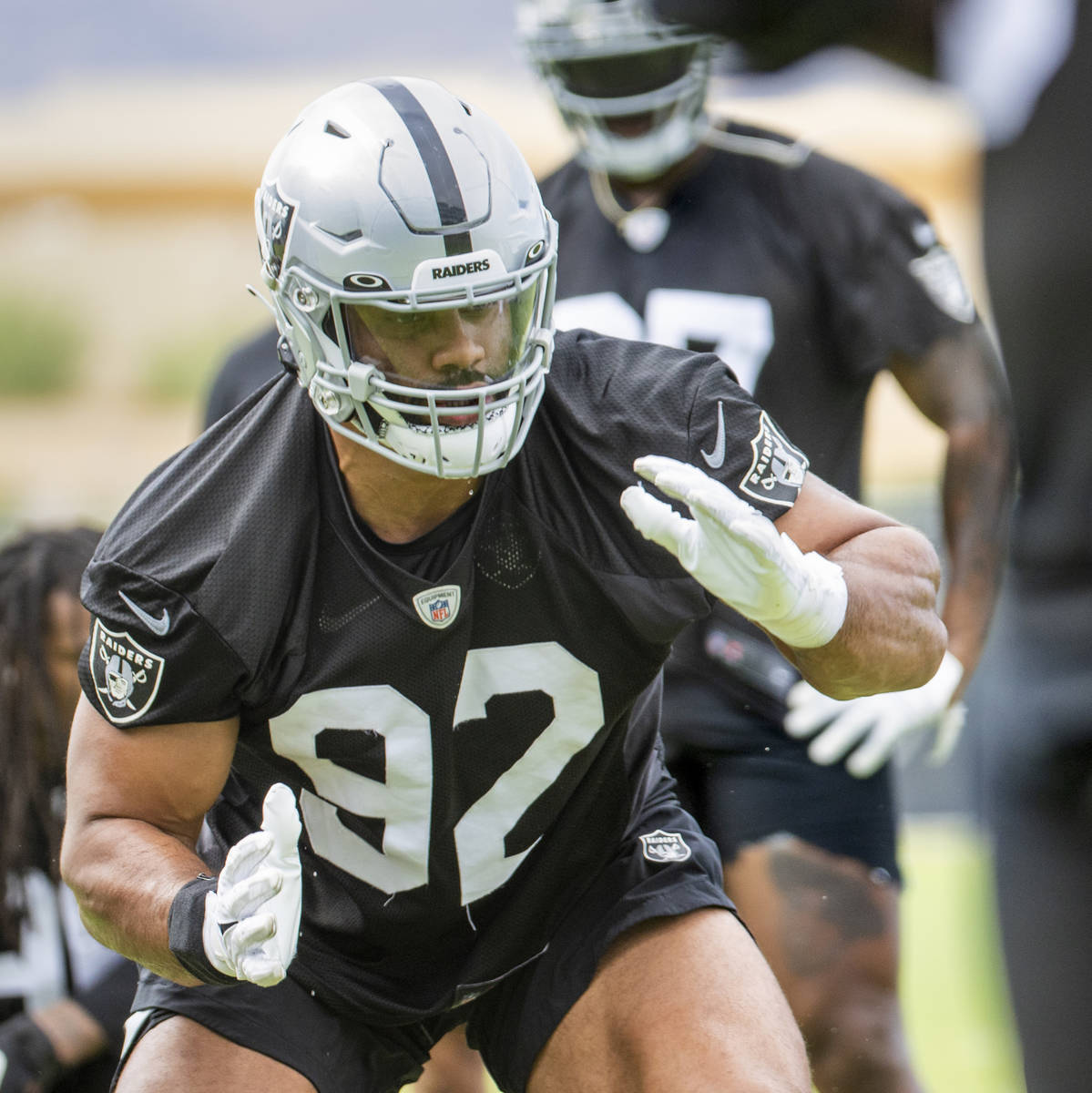 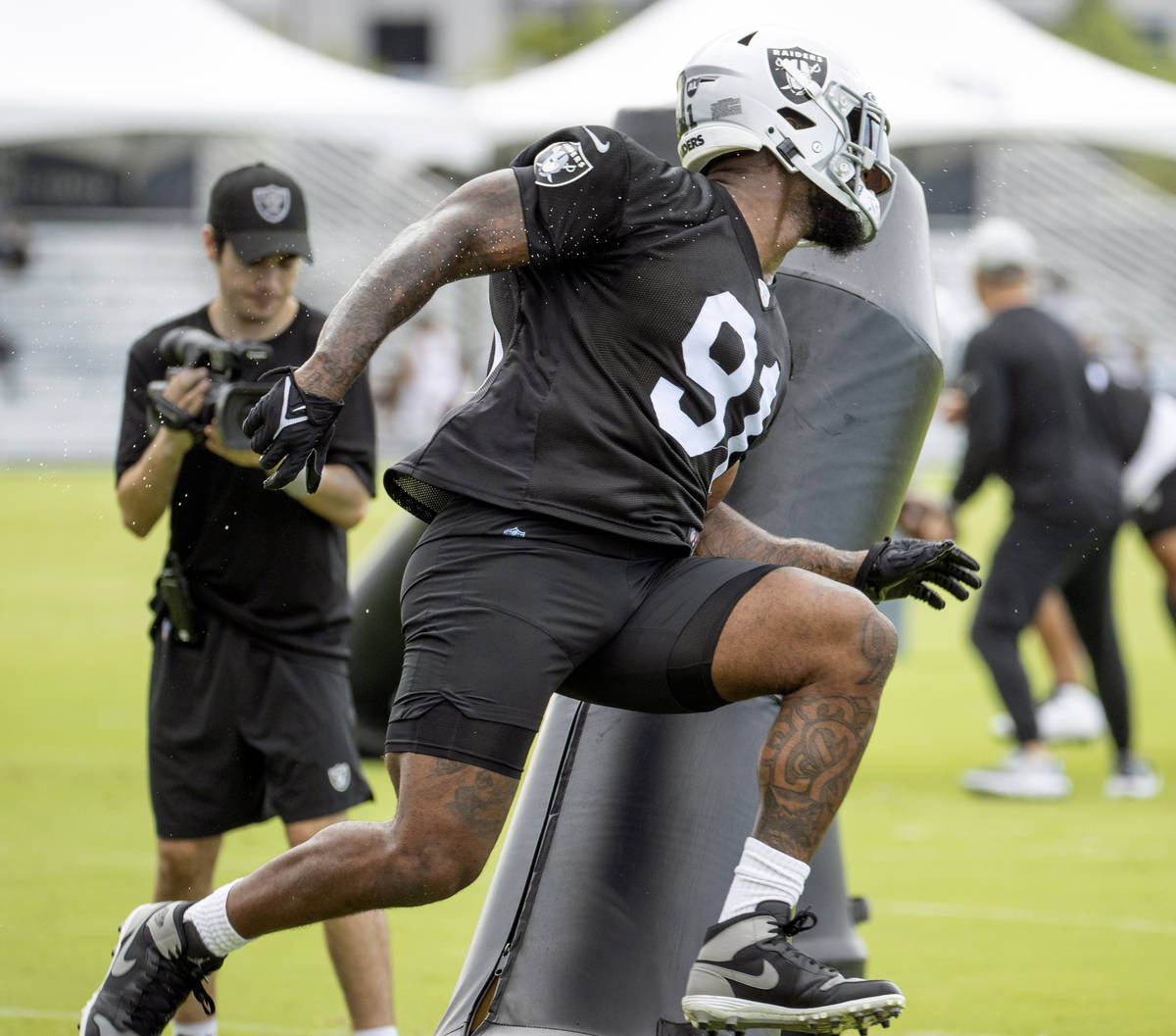 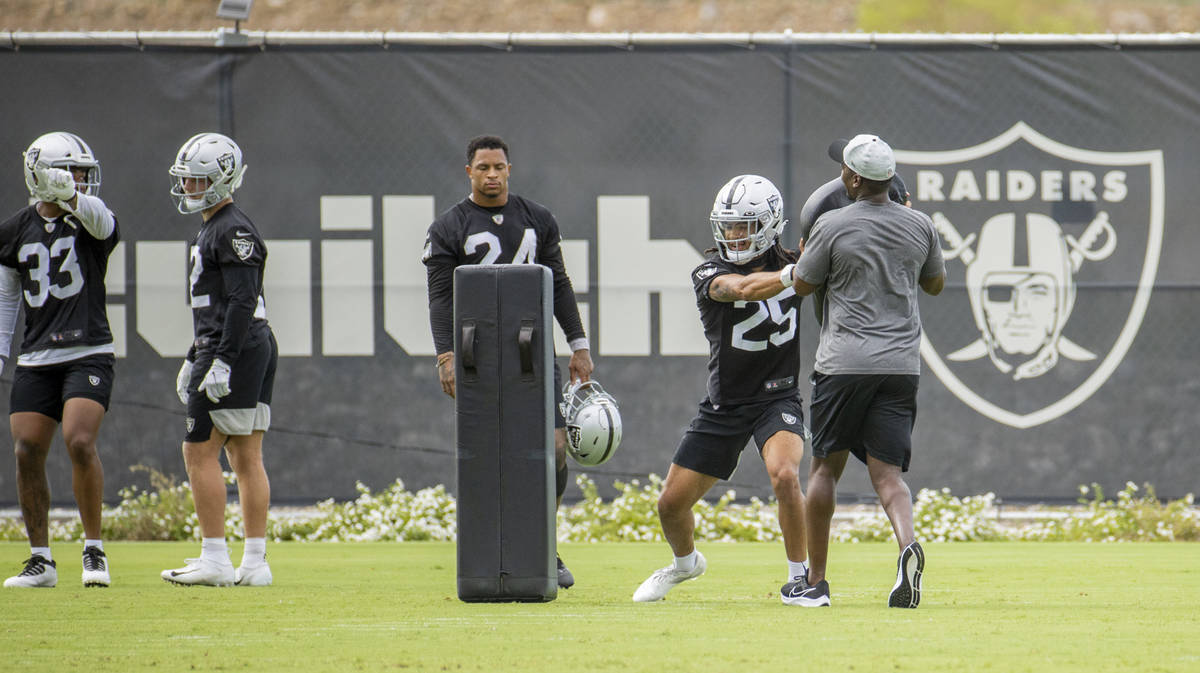 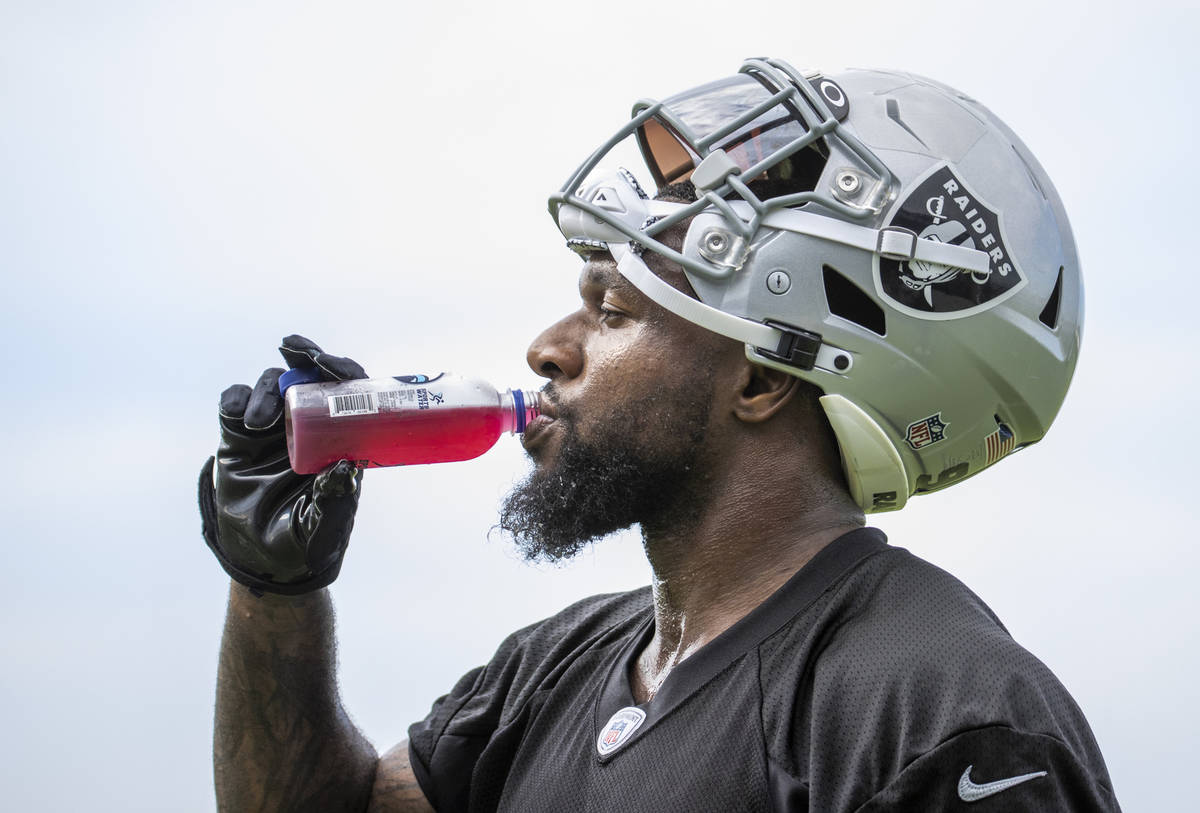 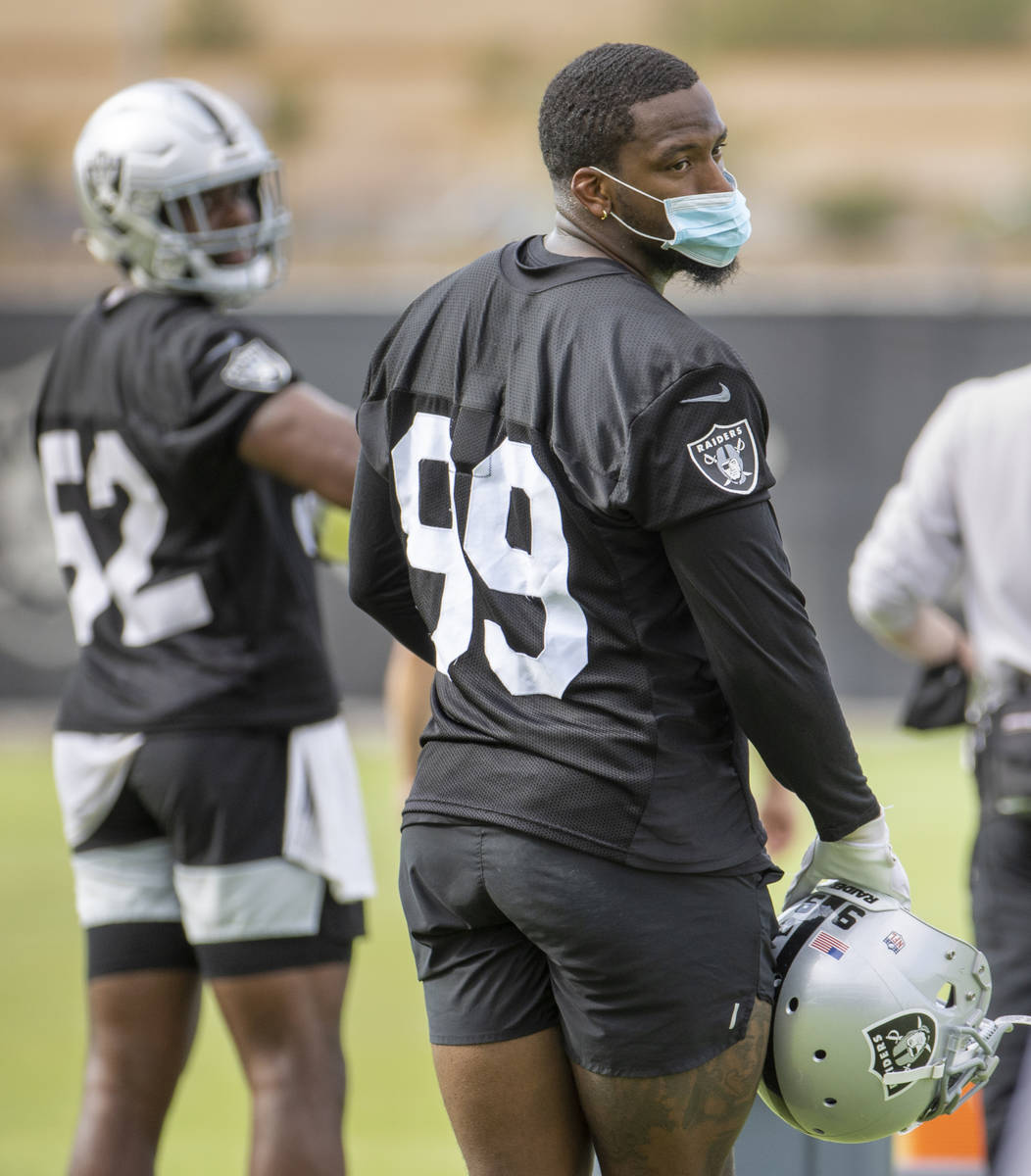 Raiders defensive end Clelin Ferrell (99) is one of a handful of players masking up during training camp at the Intermountain Healthcare Performance Center on Friday, July 30, 2021, in Henderson. (L.E. Baskow/Las Vegas Review-Journal) @Left_Eye_Images

An early morning cloud cover on Friday provided a pleasant reprise to the typical Las Vegas heat this time of year. But as new Raiders defensive coordinator Gus Bradley once again proved while bouncing around the practice field shouting instruction and encouragement, he pretty much brings the heat at all times.

The high-fives and smiles and willing nods of agreement from his players shows how well he is being received, especially among a young defense that has been browbeaten nonstop the last few years for failing to provide a shred of dependability.

In many ways, Bradley is rebuilding the defense from the head down. That means rehabilitating his players’ spirit. “Coach Bradley has brought a different energy,” Raiders defensive end Maxx Crosby said.

What Bradley has received in return are willing ears and commitment from a group that is eager to finally be an asset. “These guys have been hungry from the day I walked in,” Bradley said. “They want to learn. They want to do well.”

Of course, eagerness only goes so far. While Bradley needed to get full buy-ins from holdovers like Crosby and Clelin Ferrell and Damon Arnette and Trayvon Mullen and Cory Littleton and Johnathan Abram, he also needed improved talent at all levels of the defense.

That is where a newcomer like defensive end Yannick Ngakoue comes into play.

His track record of production has made him a sort of player version of Bradley. At the urging of defensive line coach Rod Marinelli, Ngakoue hasn’t just been given the green light to carry the coaching staff’s message to the field, he is being urged to do so.

“He wants me to lead,” Ngakoue said of his position coach. “And I take that on my shoulders. I’m excited about that. I’m happy to be one of the leaders of this team. That’s how I view myself.”

The roles Ngakoue plays are multiple. For all the draft capital the Raiders have invested on defense the last three years, it’s left a leadership void among a bunch of young players still trying to establish themselves as NFL players.

The lack of practical guidance has reared its ugly head time and time again over the last few years, specifically at key moments when the influence of an experienced veteran was needed most. The Raiders have typically floundered during those times, surrendering back-breaking big plays on key third downs or collapsing in late-game situations.

The presence of Ngakoue — and fellow veterans like Quinton Jefferson and Casey Hayward — is supposed to change all that. For the first time in a while, the Raiders have multiple respected veterans expected to play key roles on and off the field.

“He’s a very, very prideful man,” said Bradley, who was Ngakoue’s first head coach in Jacksonville in 2016. “I think what I am seeing him do more now is he’s helping everybody. He’s helping younger players. He knows what he needs to do, and I see him sharing more of those things with some of the younger players.”

Ngakoue welcomes the role he’ll play inside the building just as much as the one he’ll play on the field.

“My mom always told me to lead,” Ngakoue said. “And that responsibility of being a core guy to help get this defense moving, I take that with pride. That’s why I try to be the first person in the building each and every day. Just to lead by example.” 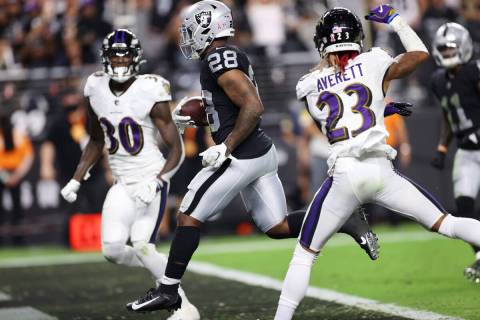 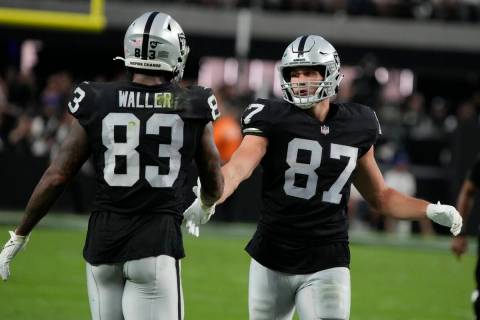 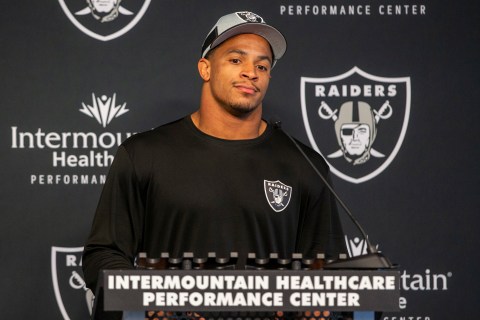 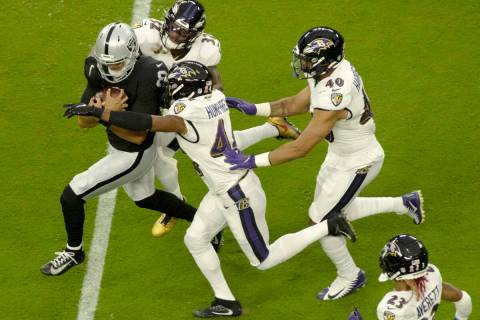