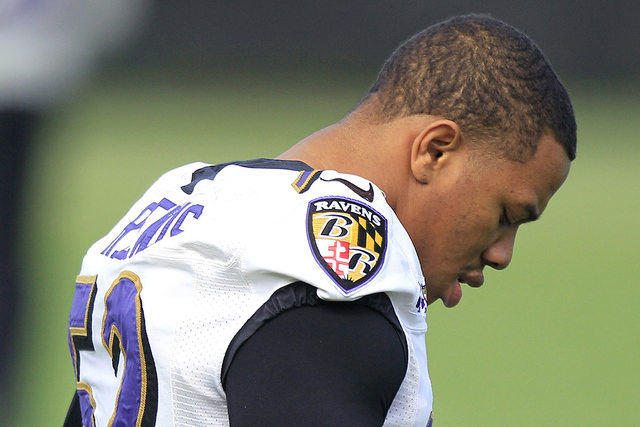 Baltimore Ravens running back Ray Rice warms up during the NFL‘s Super Bowl XLVII football practice in Metairie, Louisiana in this February 1, 2013 file photo. The Ravens announced September 8, 2014 the team has terminated its contract with Rice after a video surfaced that appears to show Rice striking his then-fiance inside an eleevator at an Atlantic City, New Jersey casino in February. (Sean Gardner/Files/Reuters)

Rice, a three-time Pro Bowler who played with the Baltimore Ravens from 2008 until being suspended in 2014, had his $35 million contract terminated in September when a graphic video surfaced of him knocking out his then-finance Janay Palmer in an elevator at a New Jersey casino in February.

Rice, 28, applied for New Jersey’s pre-trial intervention program at a court appearance last May, where he pleaded not guilty to assault charges.

The Rice case triggered a wave of criticism against NFL Commissioner Roger Goodell for what was widely seen as light penalties he gave to players in domestic abuse cases.

Goodell initially gave Rice a two-game suspension for the fight but in September after video of the punch went viral, suspended him indefinitely. The commissioner admitted “he didn’t get it right” and has since revamped the league’s policies concerning domestic violence.

Rice filed a wrongful termination grievance after he was cut from the Ravens and ultimately settled with the club for a reported $1.6 million.

Rice had his indefinite suspension from the NFL overturned and is a free agent, hoping to land a job with another team. He has since married Palmer.