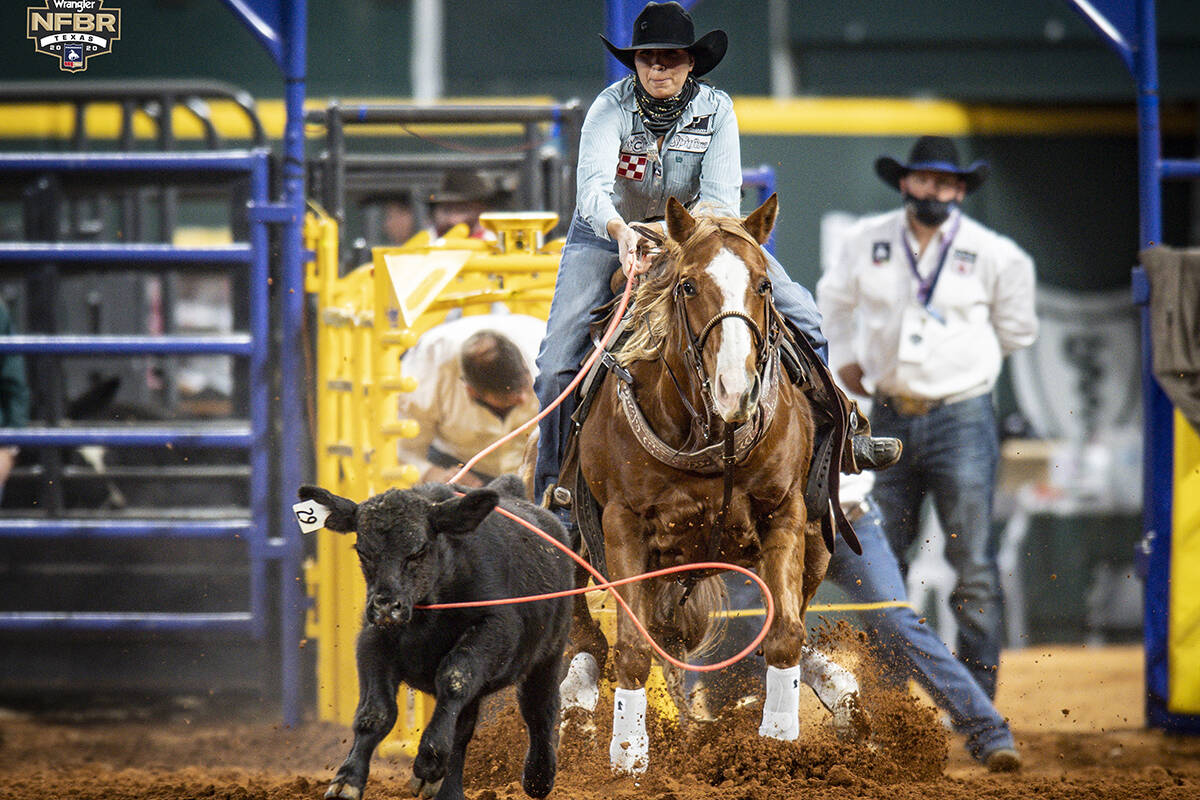 Martha Angelone competes on Day 6 of the National Finals Rodeo in 2020. ( Joe Duty/PRCA)

A case in point: the Wrangler National Finals Breakaway Roping at the South Point Arena & Equestrian Center on Nov. 29 and 30, preceding the Dec. 1-10 NFR at the Thomas & Mack Center.

Women’s breakaway roping is a derivative of tie-down roping, except the calves aren’t tied down as in the traditional men’s NFR event . It has existed for more than 50 years but recently has grown in stature — so much so there is even talk about breakaway roping becoming an official NFR event.

Glause said breakaway roping has become exponentially more popular since 2020 with the advent of national championship events. But he credits the 2019 breakaway competition at the American, a lucrative rodeo at AT&T Stadium in Arlington, Texas, for much of the growth spurt.

“Madison Outhier was 16 years old and won $100,000 and it captured the spotlight,” he said about the high school polo star, basketball player and daughter of former NFR bronc rider Mike Outhier. “If I have to look for one moment that catapulted it, that would be the moment. You had a young girl winning big money on a big stage.”

Glause said there were 62 breakaway ropings held in conjunction with PRCA-sanctioned rodeos that paid around $600,000 in 2020 with more than 200 in 2021 and a total purse topping $2 million. He expects more growth this season.

But the NFR has sold out for 30-plus years, and adding breakaway roping to the show is not going to sell more tickets, popcorn or beer, he said. At the same time, it would create an expense and a need to find room in an already small Thomas & Mack Center footprint for additional livestock pens, horse trailers and the pickup trucks that pull them.

Adding another event also would tack on time to a show that now lasts a concise two hours as preferred by the NFR’s television partners.

“We’re not opposed to adding another ladies’ event. But …there’s some logistical issues that have to be worked through before it can become a reality,” Glause said.

He also believes relocating to the cowboy-centric South Point, where prize money will be bumped to $250,000, will be the next step in breakaway roping’s progression.

“It’s certainly the place to be,” Glause said about South Point’s reputation as NFR headquarters before and after the National Finals.

South Point general manager Ryan Growney added: “When Paula and Michael Gaughan built the South Point, they created a place that cowboys and cowgirls could call their home away from home — we call it Vegas Cowboy Central. With the addition of the Breakaway Finals, we’ll call it Vegas Cowgirl Central, and it will be an amazing addition to all of the other events and activities held at the South Point during those first two weeks in December.” ◆