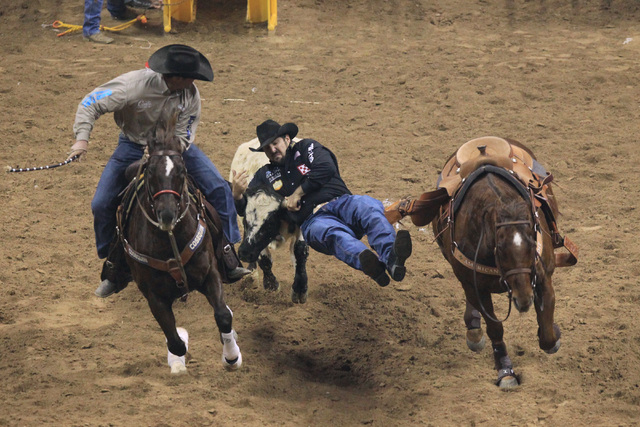 When you call Luke Branquinho on his cellphone, rather than hearing the typical ring in your ear, you get the Tom Petty classic “I Won’t Back Down.”

The song couldn’t be more apropos for the steer wrestler from Los Alamos, Calif. Back in July, he was in the midst of a stellar season, leading the PRCA world standings with nearly $66,000 in earnings. But then, at a rodeo in Salinas, Calif., he tore the latissimus dorsi muscle — the largest muscle in the back, and one that’s key for shoulder movement.

In other words, not the best muscle to blow out for a man who makes his living jumping off horses to wrestle steers to the ground.

“I ruptured it right off the bone,” Branquinho said, noting it sounds worse than it feels. “It didn’t hurt. I felt it and heard it pop, and I knew something wasn’t right.”

It was bad news for someone aiming to reach the National Finals Rodeo for the 13th time in his career, with an excellent shot to grab his fifth world championship. The good news: Branquinho did have that $65,992 already in his pocket. So despite not competing the rest of the regular season, he still finished eighth in the steer wrestling standings, well within the top 15 who qualify for the NFR.

“I knew if I had to have surgery, I needed it as soon as possible to be able to compete this week,” said Branquinho, who was aided by Dr. Tandy Freeman, a longtime and well-regarded consultant to cowboys, and Dr. Felix Savoie, a top-flight surgeon in New Orleans. “I went and saw a couple other doctors, and both of them said six to eight months. That obviously wasn’t going to cut it.

“Tandy said I could come back in four months (with Dr. Savoie). So I took that risk.”

He didn’t back down from the challenge of surgery and a rigorous physical therapy regimen, and it’s paid off as the NFR wraps up its 10-day run today at the Thomas &Mack Center. Branquinho opened with a tie for second place worth $13,179 in the first round, then split first in the second round for another $17,010 and took third in the third round for $11,340. After missing 4½ months, he placed in the money in six of the first seven rounds while jumping from eighth in the world standings back to first.

He credited a fortuitous break, a lot of hard work and a high-protein diet.

“I thought I’d be more toward the bottom (of the top 15) when I got here. But the guys at the bottom left a bubble there where I didn’t get passed by too many guys,” he said. “My goal was to get this fixed and be ready for the Finals. I started on an elliptical a week and a half after the surgery, and a pretty strict meal plan. I dropped 10 pounds in the first month. I was feeling great.

“I’m probably in the best shape I’ve been in in the last eight or 10 years. I was going to physical therapy three times a week. Then I hired a trainer for three weeks, and I was going to the YMCA five days a week to maintain the strength I had.”

And he did it all while continuing to successfully manage his diabetes.

“Everybody knows that diabetics heal slower,” Branquinho said. “I just tried to maintain as healthy a blood-sugar level as possible.”

While he was at it, the 34-year-old Branquinho got a break at a time of year that would normally be chock-full of rodeos in the mad sprint to the regular-season finish line.

“It was a very nice break to spend time at home,” said Branquinho, who has two sons — Cade, 6, and Jameson, 4 — with his wife, Lindsay. “I was taking them to soccer, swimming lessons, school. I hadn’t been around the kids for that much time in forever.”

He was able to return to action fit, rested and ready, and he’s right in the thick of the world title chase heading into today’s final round.

“It’s a good feeling to know you’re coming in with a chance to win the world title,” Branquinho said a couple of days before the NFR started. “Everybody in the top 15, it’s so tight that they all have a chance. I’m gonna go for it. There’s no need to be cautious.”

Which brings us to the Tom Petty tune.

“It’s just something I’ve always tried to live life by. You don’t back down from any challenge or anything that’s in front of you,” Branquinho said. “I have no reason to back down.”