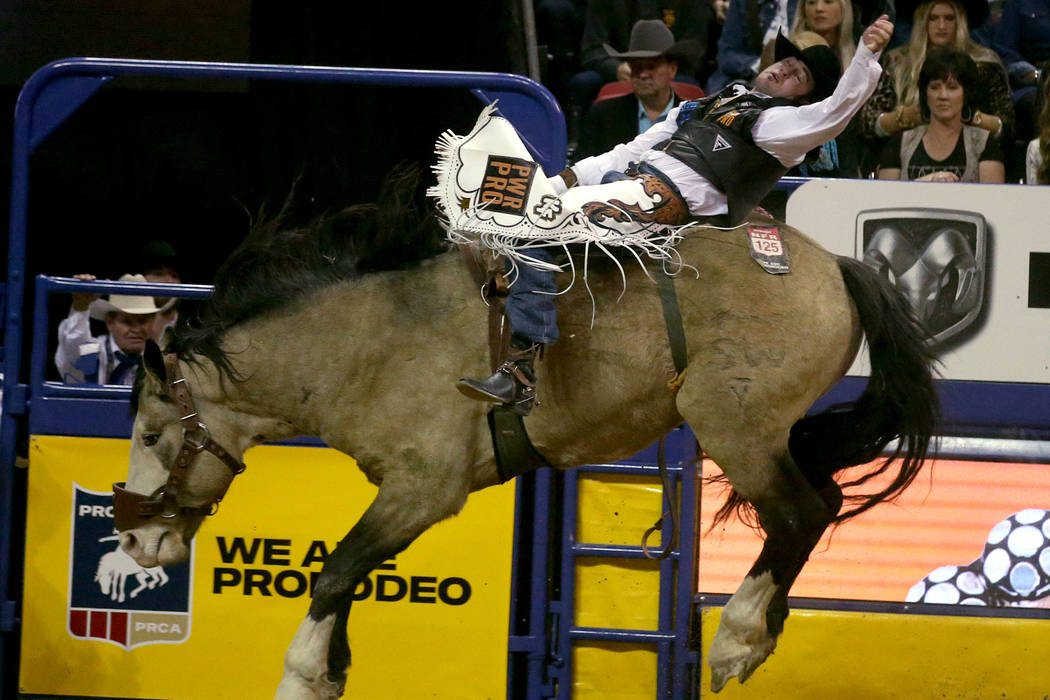 When Kaycee Feild discusses what happened to him back on March 31, one can’t help but be shocked that the 32-year-old cowboy is actually again among the field of 120 at the Wrangler National Finals Rodeo.

“I had a brain bleed, a cracked skull, and a fractured eye socket, nasal cavity and upper and lower jaw.”

It’s the kind of damage that not only ends seasons, but potentially careers — or worse.

“I never thought I was gonna die. I guess I could have, but that never crossed my mind,” Feild said. Nor did he think he was done competing, though many of his peers initially had that concern. “It was probably two to three weeks afterward, people called and asked if I was done riding. Then my travel partner Tilden Hooper says, ‘I had a lot of people ask me if you’re gonna retire.’

“It kind of hit me hard, that three weeks.”

Yet throughout that time, Feild made speedy progress. An expected two-week hospital stay ended up lasting four days, and he didn’t even require much in the way of pain pills after that. Four weeks after the wipeout, the news was even better.

“There were no symptoms at all,” he said. “The doctor saw no signs of a brain bleed, no scarring or inflammation of the brain. Pretty dang lucky, I’ll tell you that.”

And wife Stephanie was all in for that return.

“We’ve been together a long time. She knows my goals and how I want to leave this sport,” said Feild, who with Stephanie has two daughters and a son. “It was just a weird feeling after that injury, coming back and riding. Stephanie saw it in my face, in my eyes. She was behind me 100 percent. She knew this was something I wanted to go and do. She motivates me.

“I have a great team and great support from my family. If it wasn’t for them, I wouldn’t be where I am today.”

Or where he was this summer, when it was time to get back on that horse.

“Injuries happen for a reason. I’d never been handled like that by a horse,” Feild said. “It was like, ‘This is a wake-up call, buddy. You’ve got to get after it.’ I’d never been so motivated. When I came back in July, I felt really strong and really good. I just had a blast all summer long.”

“I think I placed in the money in all but four rodeos that I competed in,” Feild said. “I had a few bobbles, but for the most part, everything in the summertime was practice for the NFR. And right now, I’m feeling pretty dang good.”

“I do now!” he said. “At the time and the moment I was in, I thought I was doing everything the right way. But with experience and the things life brings — family and kids — things were different. It took me a little while to grow up and figure this out.”

With his family priorities in order, serious injuries behind him and again riding like the world champion he is, Feild couldn’t wait for this 10-day Super Bowl of Rodeo to finally arrive.

On Saturday night, in the third go-round, he caught his first check of the week, taking third with an 88-point ride to pocket $15,654, and he remained second behind Biglow in the world standings.

“I love getting on these bucking horses. I crave these horses, the biggest and best,” he said. “Competing against the best guys on the best horses, 10 nights in a row, that is competition at an all-time high. I love Vegas, and I love that pressure. I didn’t win a round last year, and that made me mad. I won six in 2011, and I want to do that again.”

Feild ended up seventh in the world in 2018, nothing to be ashamed of, to be sure. But he feels like he’s playing with house money now, so perhaps that fifth gold buckle is on the horizon.

“It was a blessed year, and it’s not over yet,” Feild said. “This is like playing for me. I’m having a riot!”