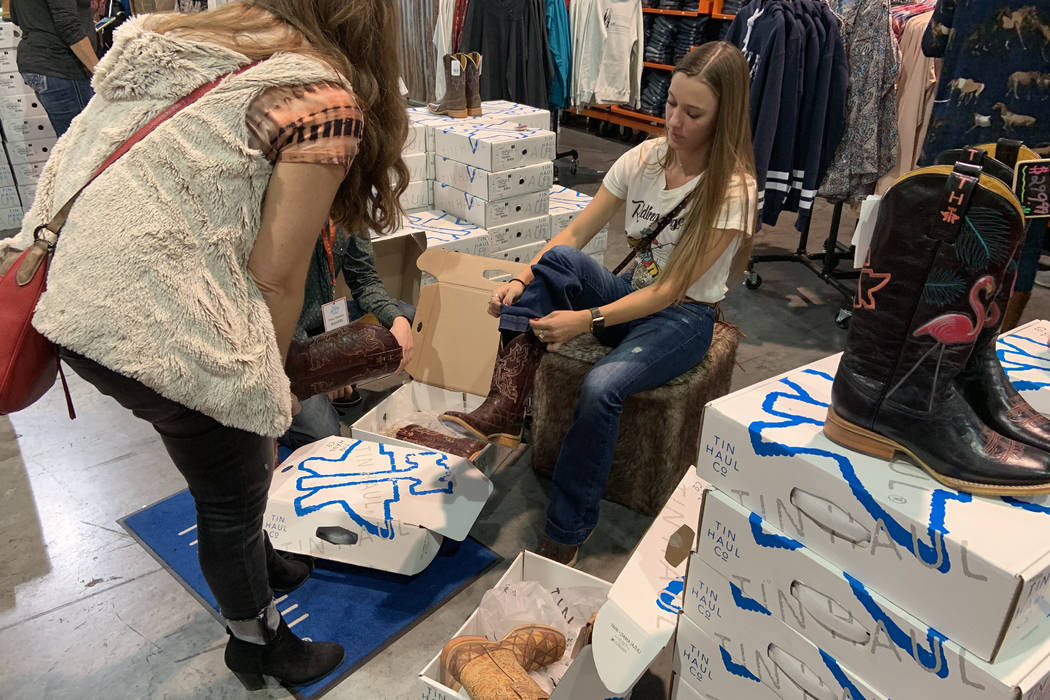 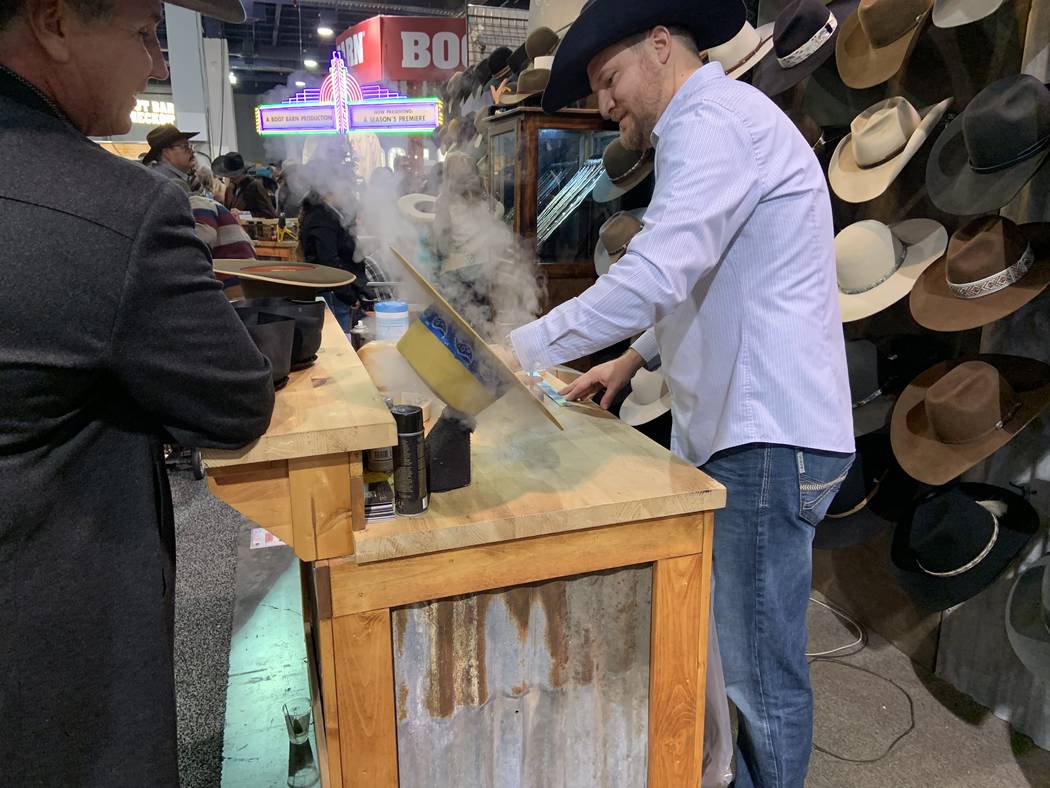 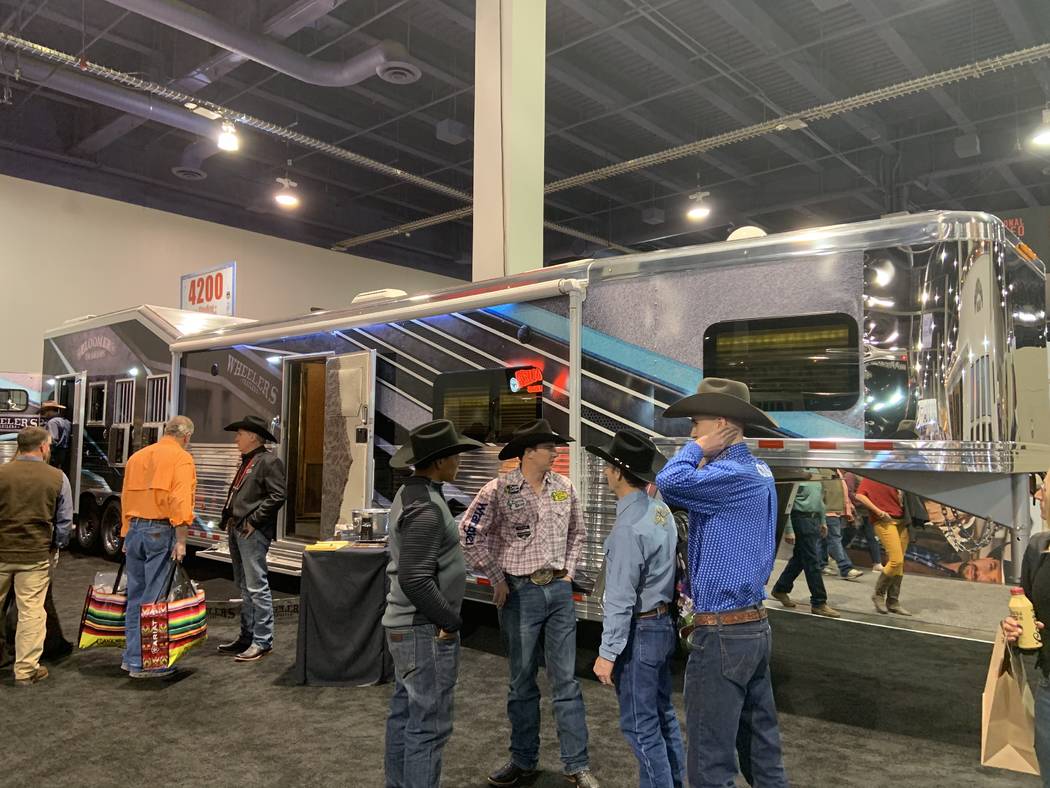 If you're in need of a massive trailer with both horse and living quarters, Cowboy Christmas has you covered. This plush unit, measuring 37 feet, 9 inches long, costs about $200,000. Patrick Everson/Las Vegas Review-Journal

When you think of Cowboy Christmas, things that typically leap to mind are hats, boots, perhaps jeans and other Western wear.

But there are countless other elements to this massive expo at Las Vegas Convention Center, held every year in conjunction with the Wrangler National Finals Rodeo. There’s everything from entertainment to food to learn-to-rope activities. Heck, you could walk in perhaps expecting to update your wardrobe a bit, and walk out as the owner of a massive trailer that has horse and living quarters.

That’s what Jed Edmiston loves to see happen, and it happens quite often each year for the trailer salesman from Boerne, Texas.

“There have been as many as 34 deals done here over the whole 10 days of the rodeo. When you translate that into numbers, that could be $7 million in sales,” Edmiston said Saturday, while standing next to a plush unit that’s longer than a first down — 37 feet, 9 inches — and costs about $200,000. “This kicks off the new year for us. We literally can take an order and design a trailer right here, take a deposit, go home and build a trailer. Those people will take delivery in April.”

Cowboy Christmas puts Edmiston face-to-face with his customers, who oftentimes live in rather remote locales and wouldn’t otherwise see his goods. The same can be said for hundreds upon hundreds of vendors sprawled across the convention floor.

Caela Garland, who’s here from Nampa, Idaho, not only for the Wrangler NFR, but is also competing in the Junior World Finals rodeo, knew this was the spot to update her footwear.

“I wanted to wait until Cowboy Christmas, because I know they’ll have the most options,” Garland said as she tried on one pair of boots after another. “I only bought one pair, but I think I tried on 10.”

What about mom? Has she gotten anything out of this, for all her effort?

“Not yet. I do strive to find something for myself,” Rhonda said.

With all that’s available, there’s no question she eventually found something. Perhaps it was the item most identified with all the cowboys, cowgirls, ranchers and Western aficionados who make their way to this shopping bonanza: a cowboy hat.

Braydan Shaw is the owner and custom hat maker for Utah-based Burns Hats. Much like Edmiston with his trailers, these 10 days are vital to the success of Shaw’s company.

“For our industry, it’s like our Super Bowl,” Shaw said. “There’s no other 10 days for us in retail like Cowboy Christmas. We’ll have 10,000 to 20,000 people per day coming through. It kicks off the holiday season for us. It’s better than Black Friday.”

While discussing the numbers, Shaw worked on hats for Mitch and Cindy Clum of Nashville, Tenn. Shaw takes basically a blank-canvass hat, then steams and shapes it into something unique, often going well beyond customer’s requests. The Clums wouldn’t buy their hats anywhere else.

“We’ve been coming to this booth for years,” Mitch said. “They’re all custom here. At home, it’s just another hat in a box. Here, it goes from scratch to your head. It’s the real McCoy.”

And as with anything custom-crafted, the satisfaction for Shaw comes from the reaction to his handiwork.

“I enjoy the interaction with the people and creating new styles,” he said. “It’s awesome watching people walk away with a smile on their face, and then hearing them getting compliments on their hat as soon as they get to the aisle.”