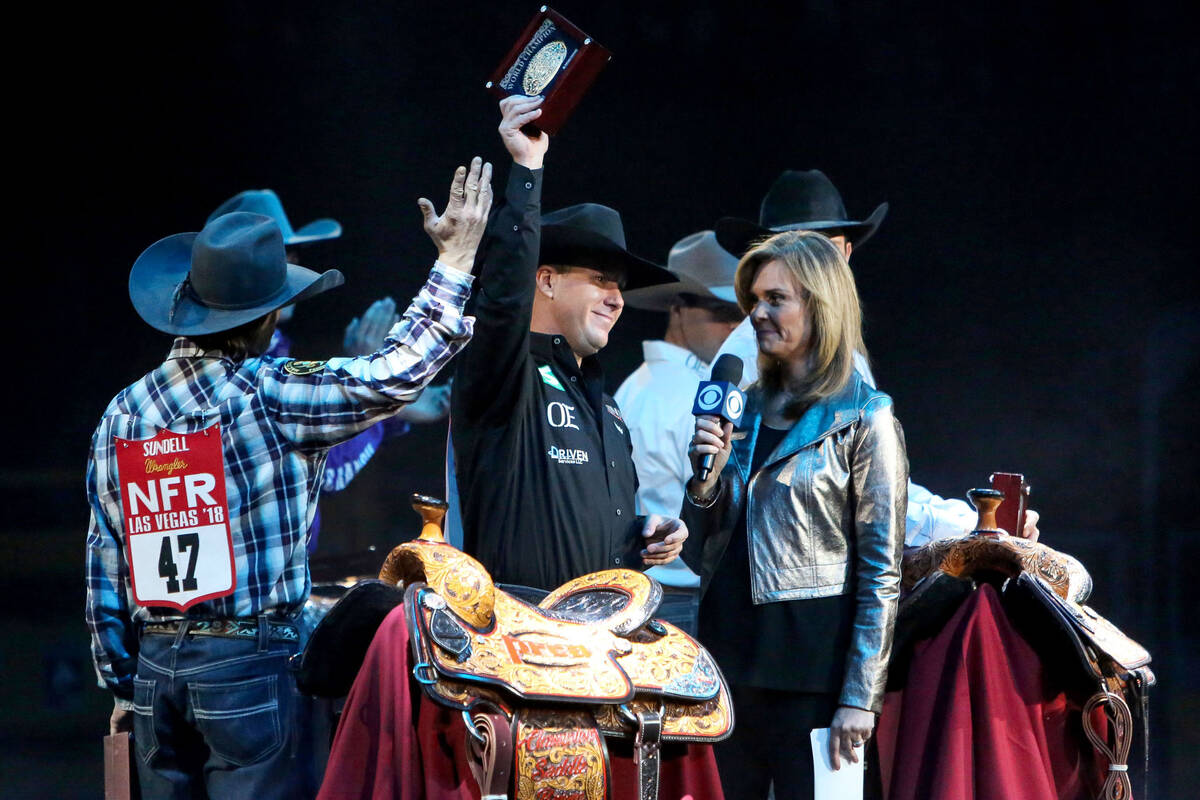 Trevor Brazile of Decatur, Texas (2) is honored on stage after becoming the 2018 PRCA All Around World Campion during the tenth go-round of the National Finals Rodeo at the Thomas & Mack Center in Las Vegas, Saturday, Dec. 15, 2018. Caroline Brehman/Las Vegas Review-Journal

The Wrangler National Finals Rodeo is an annual celebration of those who performed best over the past year. It’s often termed the Super Bowl of rodeo, with the top 15 competitors in each of seven events dueling to be crowned a world champion.

Starting this year, the Wrangler NFR will also take time to honor the great champions who’ve left an indelible mark on the Thomas & Mack Center dirt since 1985.

“The history and legacy of the Wrangler NFR is driven by its great champions,” Las Vegas Events President Pat Christenson said. “This year, we will begin to honor the most decorated contestants of the past 36 years.”

And the first class of Vegas NFR Icons is an absolute blockbuster: Ty Murray, Charmayne James and Trevor Brazile.

The trio will be honored at a luncheon Thursday, then each will get the arena spotlight over the first three nights of the Wrangler NFR. Brazile will take center stage tonight, followed by James on Friday and Murray on Saturday.

Between those three, there are a whopping 46 gold buckles, with tonight’s honoree accounting for more than half of those.

Simply put, nobody is better. Brazile made his mark at the timed-event end of the arena. Between 2002 and 2020, he racked up 26 world championships, including a whopping 14 gold buckles as all-around world champion cowboy. Also, Brazile won eight steer roping titles, three in tie-down roping and one in team roping.

Even with all those achievements, Brazile was still caught off-guard by Vegas NFR Icons honor.

“I’m obviously surprised because there’s never been anything like it done before,” he said. “It’s kind of like a Hall of Fame. And when you’ve got generations of great cowboys and cowgirls, to be in that first class is really cool. It’s really an honor.”

Brazile earned his first world championship in 2002, claiming the all-around crown, four years removed from Murray’s final two gold buckles, in bull riding and all-around in 1998. Brazile said his Vegas NFR Icons co-honorees Murray and James were both huge influences on his career.

“I’ve been a fan of both,” Brazile said. “Ty Murray’s success in the arena is what got me up a lot of mornings. We worked at different ends of the arena, but he was an inspiration nonetheless.”

James won the last of 11 barrel racing gold buckles in 2002, when Brazile got his first championship.

“I don’t care if you know barrel racing or not. You can’t not be a fan of the winningest barrel racer of all time,” Brazile said. “She was amazing, her horse Scamper was amazing. There will never be another duo like her and Scamper. You can’t catch lightning in a bottle like that again.”

Brazile also pointed to a few other cowboys he hopes will soon be honored as Vegas NFR Icons, peers and mentors who helped blaze his trail.

“Ty was an inspiration to me. But we’ve got Larry Mahan, Tom Ferguson, Joe Beaver, Roy Cooper. It’s gotta be only a matter of time before we’re celebrating them,” Brazile said.

But again, it’s hard to do much better than being feted with longtime good friends James and Murray.

“I know that arena well, and I know the fans. I’m looking forward to it, for sure,” Brazile said. “That’s a heck of a way to get the week started, for sure. It’s just icing on the cake. That season in my life is over, and we had a blast. It was more than I could’ve ever dreamed of.”

James claimed her first barrel racing gold buckle as a fresh-faced 14-year-old in 1984, the year before the Wrangler NFR moved to Las Vegas. Then she won the next nine world championships on the Thomas & Mack Center dirt.

Every one of those 10 consecutive titles came aboard superhorse Scamper. James and Scamper dominated in a way no one previously had in the NFR, in any event.

Like Brazile, James was surprised upon learning of the Vegas NFR Icons honor.

“I really didn’t see it coming. It’s just really exciting,” James said. “Las Vegas and the NFR are such a big part of my life, and Scamper’s too.”

James retired Scamper from competition after the 10th gold buckle, in 1993. In 2002, she nabbed an 11th world championship aboard Cruiser. She gave all of the credit to her horses, primarily to the unstoppable Scamper.

And James is thrilled to be getting honored alongside good friends Brazile and Murray.

“To go in with Ty and Trevor is just really cool,” she said. “We all know each other really well. We all just have a mutual respect for what we all did. We kind of walked in the same shoes. There’s a little bit of understanding with the road we walked.

“I look at Ty and Trevor, they were amazing. What a great honor to be an NFR Icon with those two guys.”

It’s a nice culmination to huge part of James’ life. The honor helps validate the endless travel and training and work involved in reaching the top and staying there for a long time.

“What a lot of people don’t realize is the amount of effort and try it takes. You pour your whole life into it,” James said. “I don’t know that I’d want to go back and do it again. But I wouldn’t change any of it. It’s all happened the way it was supposed to.”

“Larry Mahan inspired my whole life and career. That set the tone and gave me a benchmark,” Murray said. “I was very passionate about it until I reached seven all-around championships in the rough-stock end of the arena. If you’re trying to become great, it’s important to have guys who can inspire you.”

Like his peers James and Brazile, Murray was excited to learn of his inclusion with the first class of Vegas NFR Icons.

“I’m both surprised and pleased,” Murray said, particularly excited about the banners that will hang in the Thomas & Mack rafters, honoring the Icons. “You see it in other sports, but nothing like this has ever been done in our sport. I’ve been to every arena in the country, and everywhere you go, you see the great players with their numbers and names retired, and the banner in the rafters.

“It’s cool to see. You know that person was very, very special.”

As noted above, all three of these Icons know each other well. But James’ career started before and ended after Murray’s career, so the cowboy feels a special kinship with James.

“She was around for my whole professional career. We’re great friends,” Murray said. “What she was able to do in the sport was unprecedented. I’m flattered to go in with two great friends. They are definitely two absolute icons of the game. They’ll never be forgotten.”

Of course, neither will Murray.

“A program like the NFR Icons is important, because everyone in every walk of life needs to understand who came before them,” Murray said. “I want to show the utmost respect for those champions who inspired me.”