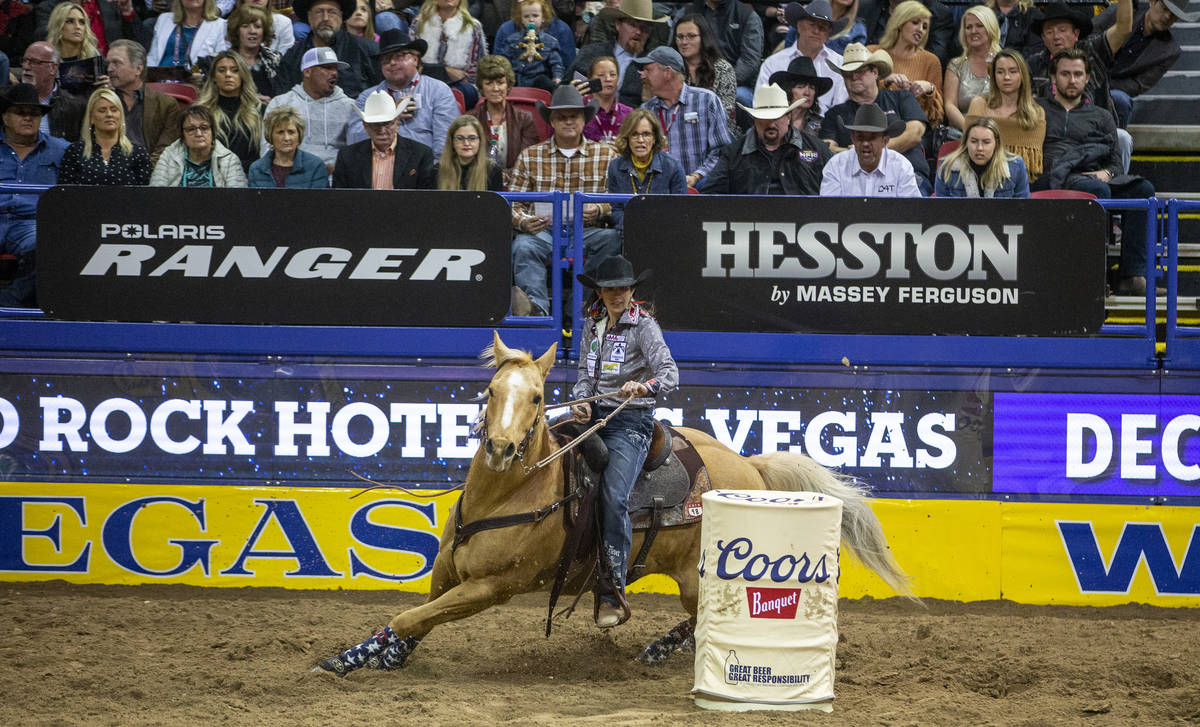 Jessica Routier of Buffalo, S.D., turns the corner in Barrel racing at the tenth go round of the Wrangler National Finals Rodeo at the Thomas & Mack Center on Saturday, Dec. 14, 2019, in Las Vegas. (L.E. Baskow/Las Vegas Review-Journal) @Left_Eye_Images 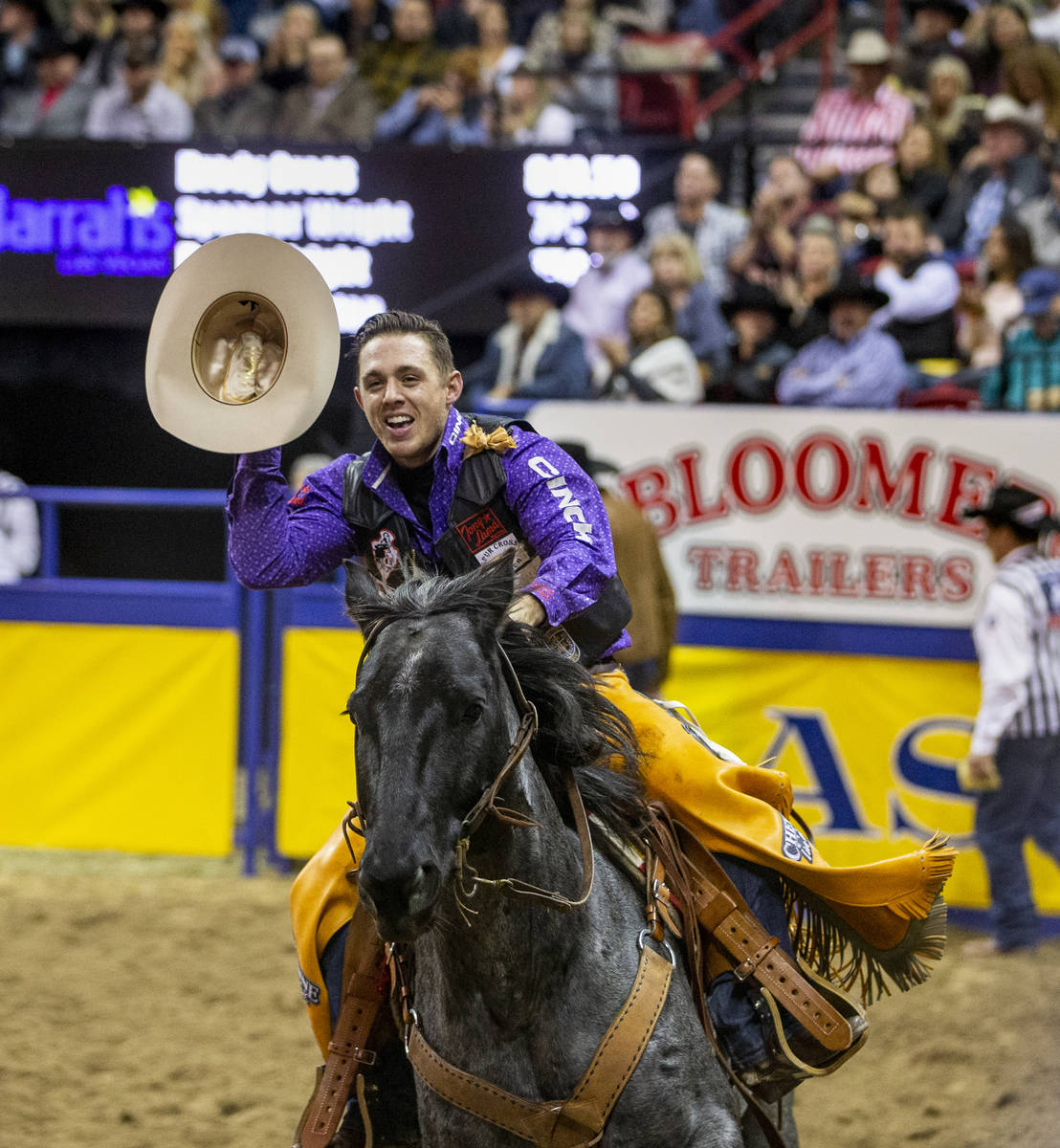 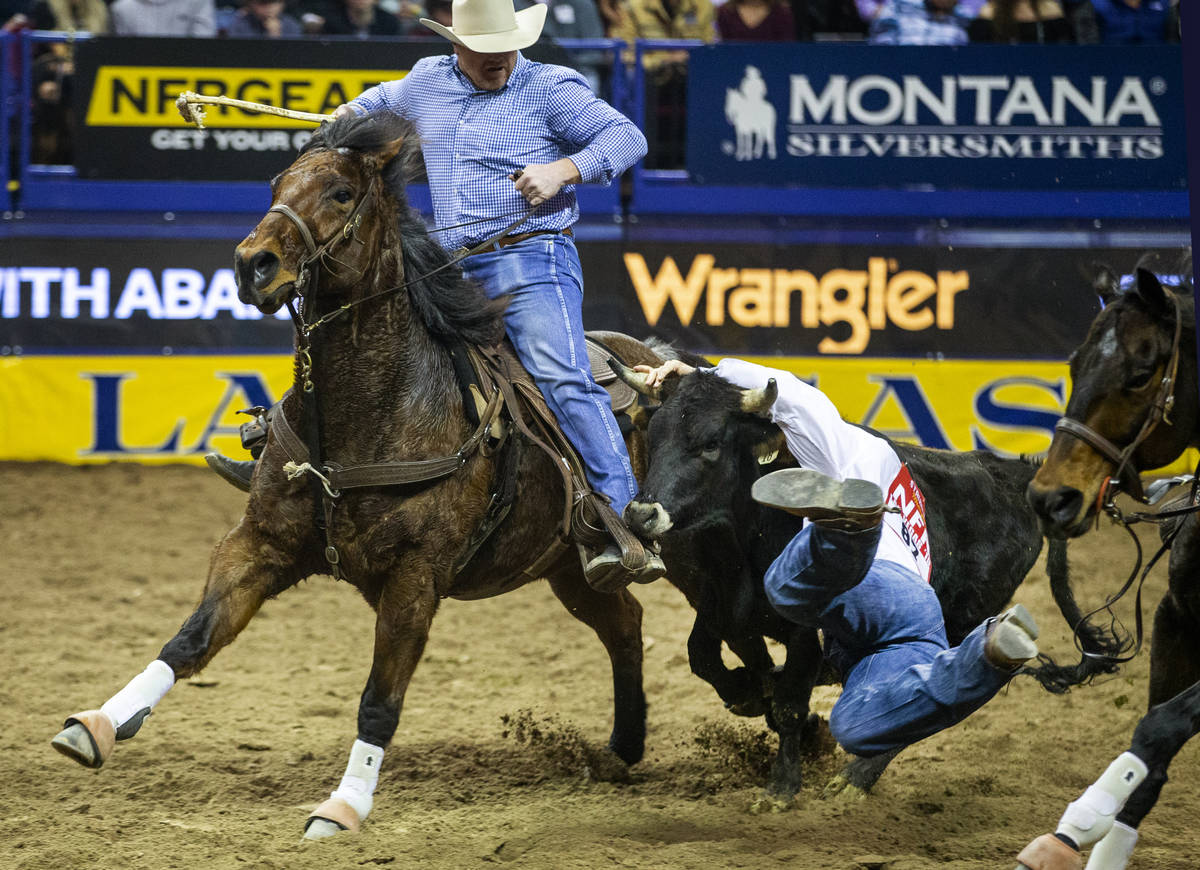 J.D. Struxness of Milan, Minn., mistimes the leap in Steer Wrestling during the tenth go round of the Wrangler National Finals Rodeo at the Thomas & Mack Center on Saturday, Dec. 14, 2019, in Las Vegas. (L.E. Baskow/Las Vegas Review-Journal) @Left_Eye_Images 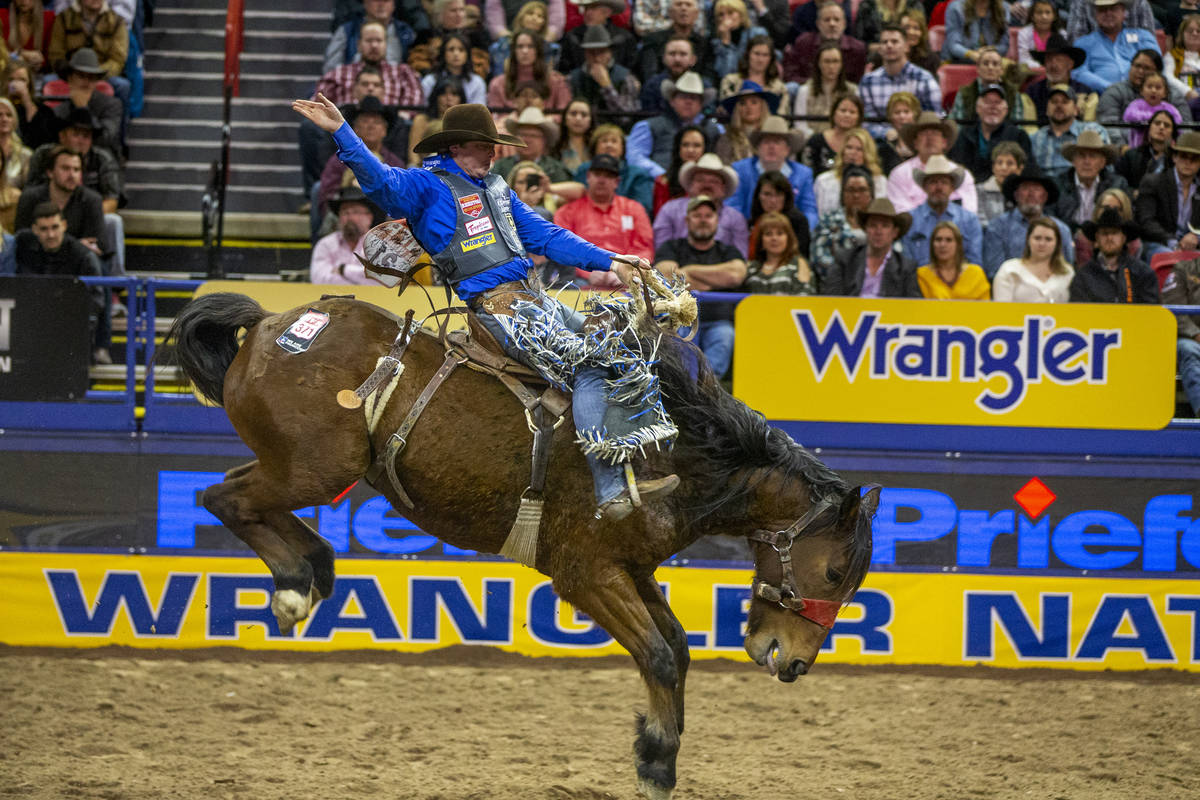 Spencer Wright of Milford, Utah, kicks back for the crowd in Saddle Bronc Riding at the tenth go round of the Wrangler National Finals Rodeo at the Thomas & Mack Center on Saturday, Dec. 14, 2019, in Las Vegas. (L.E. Baskow/Las Vegas Review-Journal) @Left_Eye_Images

Professional Rodeo Cowboy Association and Texas Rangers officials have called a news conference Wednesday morning at which they will announce the temporary relocation.

Globe Life Field, which has a retractable roof and seats 40,300 people, is the new home stadium of the Rangers MLB team. It debuted with a season-opening game July 24 against the Colorado Rockies.

The decision was confirmed by multiple sources who are not authorized to discuss the move.

PRCA CEO George Taylor did not return a call seeking comment. But Texas Gov. Greg Abbott confirmed the move in a tweet Tuesday night, adding, “This event belongs in Texas!”

The NFR has been held in Las Vegas at the Thomas & Mack Center since moving from Oklahoma City in 1985, selling out 10 nights of events every year and filling local hotels. But state restrictions limiting ticket sales to live sporting events amid the coronavirus pandemic has fueled speculation the PRCA would seek an alternative site for this year’s rodeo.

Las Vegas Events annually projects 17,000 people in attendance at every performance at Thomas & Mack, or 170,000 total. The event has an economic impact of an estimated $200 million every year.

Texas state guidelines allow for “50 percent occupancy at professional, collegiate or similar sporting events.” The event is expected to return to Las Vegas in 2021.

According to an advisory, Taylor, Texas Rangers Chief Operating Officer Neil Leibman, Arlington Mayor Jeff Williams, Fort Worth Mayor Betsy Price and Terry Zrubek, director of economic development for the office of Texas Gov. Greg Abbott, will be on hand to “announce the first major non-baseball event at the park since its opening.”

The loss of the NFR is another major blow to the Las Vegas economy.

“It’s a fluid situation with this pandemic. It’s going to dictate what we do,” Las Vegas Events President Pat Christenson said in July about the possibility of the NFR remaining in Las Vegas. “Our hope is that we’re doing a fully attended NFR. As we get closer and if that’s not possible, we’re going to have to look at options.”

Representatives of Las Vegas Events, the special events coordinator for the rodeo, said last month that Cowboy Christmas, an annual retail gift show associated with the National Finals Rodeo, would be canceled for 2020.

The PRCA announced Aug. 19 that it has been exploring options for temporarily relocating the rodeo. The Colorado Springs, Colorado-based association had said a decision would be reached by Sept. 30 as to whether to have the rodeo in Las Vegas without fans in attendance or search for another venue in another city, but it appears the announcement is coming sooner.

“There is no single event that has a bigger impact on Las Vegas than the National Finals Rodeo,” Christenson said.

Holding the rodeo without fans was going to be problematic for Las Vegas because ticket sales revenue generates millions of dollars in prize-pool money.

The PRCA’s contract with Las Vegas Events to host the NFR runs through 2024. A Las Vegas NFR board member said it is likely that agreement would extend by one year because of the event lost to Arlington.

Representatives of Las Vegas Events said if the rodeo is held in another destination, Cowboy Christmas could be hosted there as well. LVE said it would work with the PRCA to determine the feasibility of including Cowboy Christmas in its plan for 2020 by the end of September.

One of the most successful and popular ancillary events of NFR in Las Vegas, Cowboy Christmas has grown into a 440,000-square-foot shopping and interactive experience.

With more than 350 exhibitors from across the United States, Cowboy Christmas caters to the Western lifestyle and includes live entertainment, specialty food and beverage, and Western exhibits.