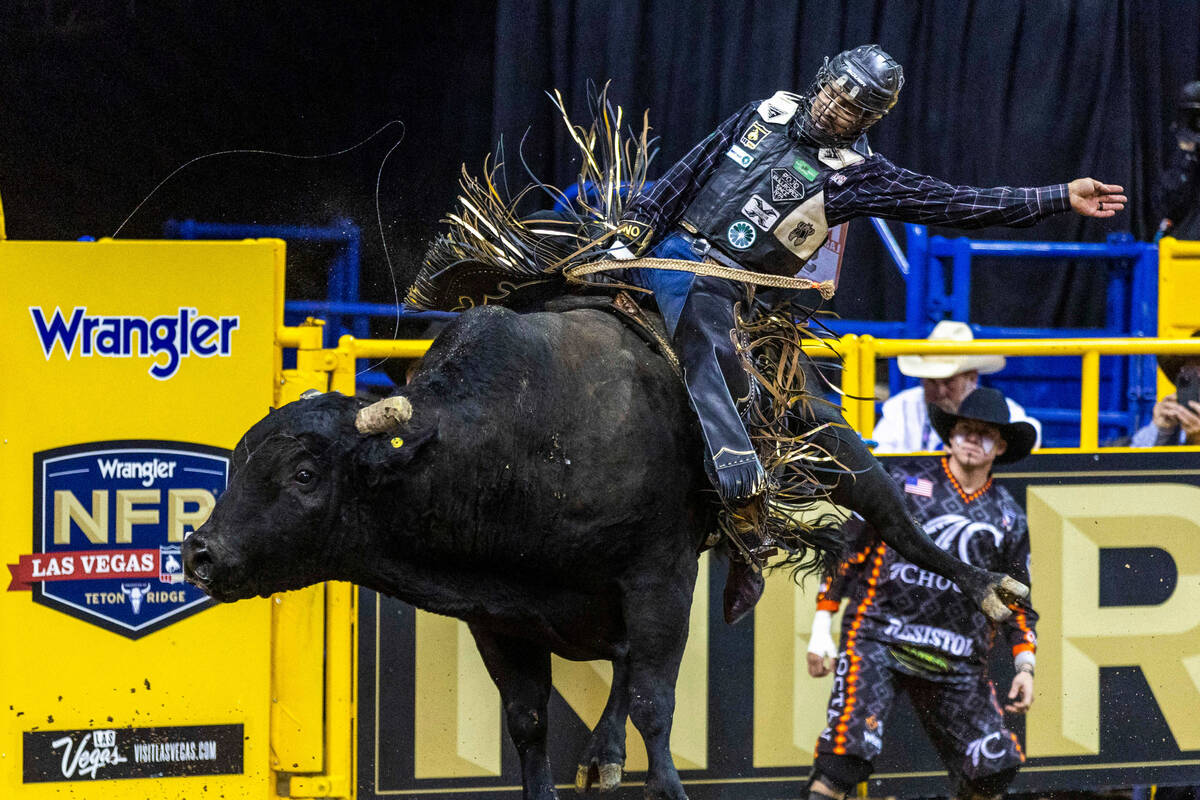 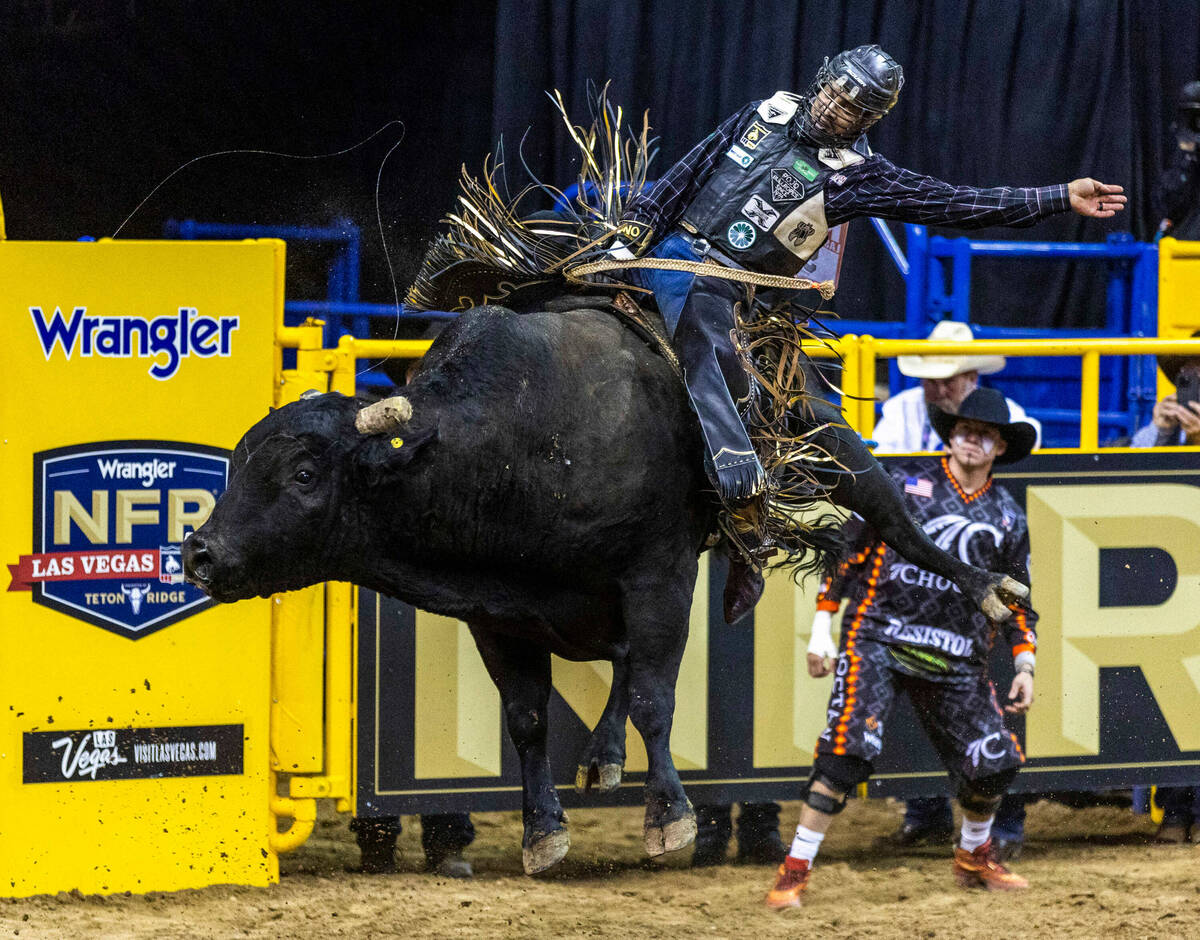 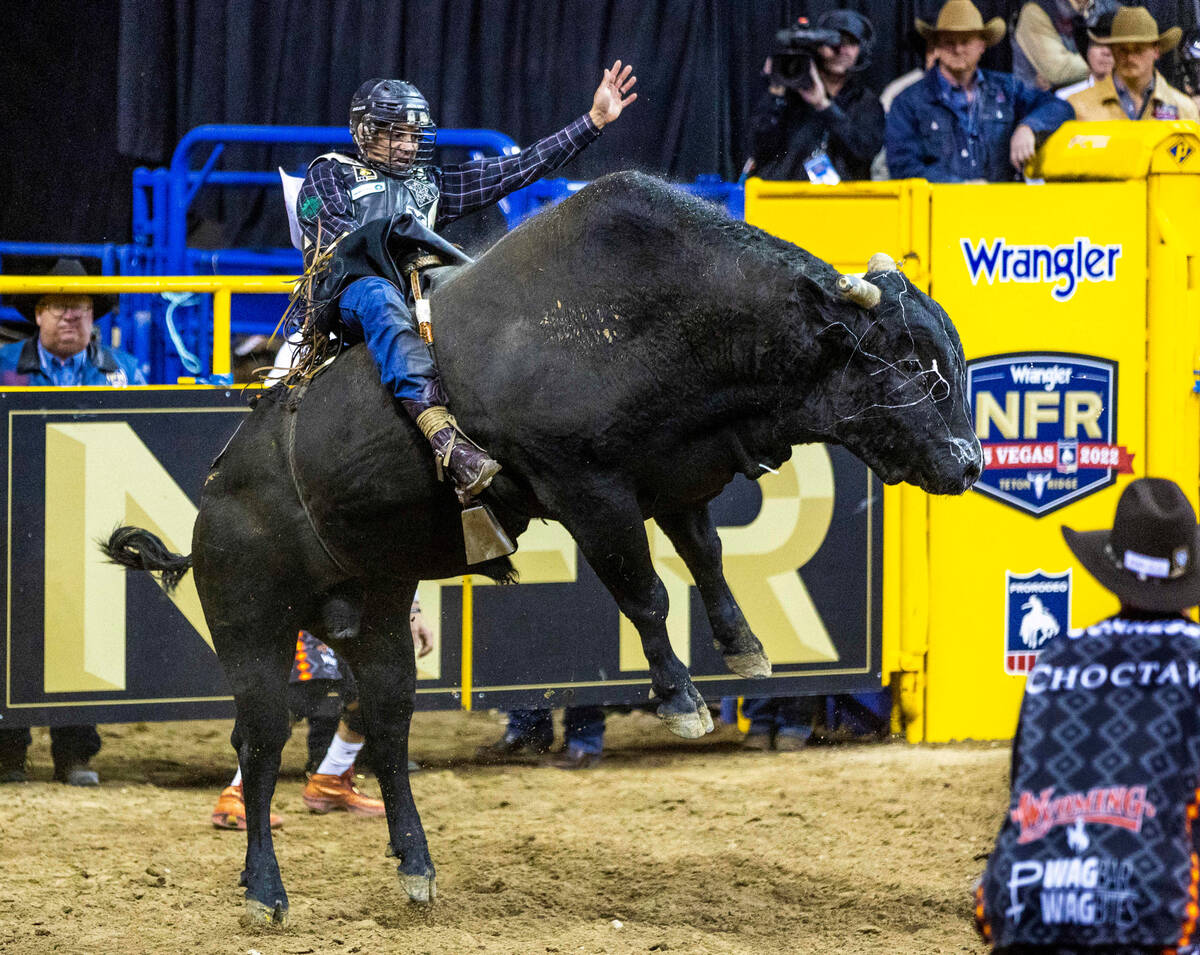 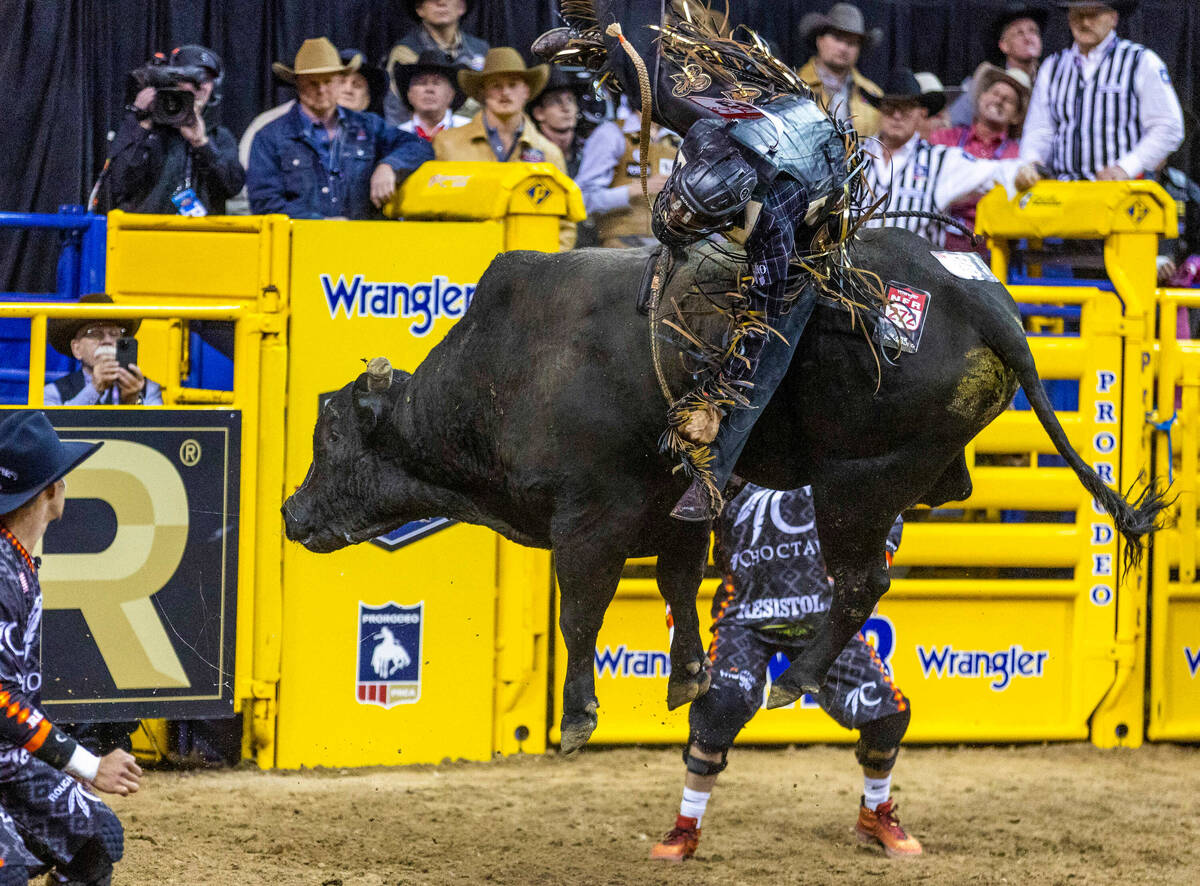 Reid Oftedahl of Raymond, Minn., falls off of Under The Influence in Bull Riding during the National Finals Rodeo Day 2 at the Thomas & Mack Center on Friday, Dec. 2, 2022, in Las Vegas. (L.E. Baskow/Las Vegas Review-Journal) @Left_Eye_Images 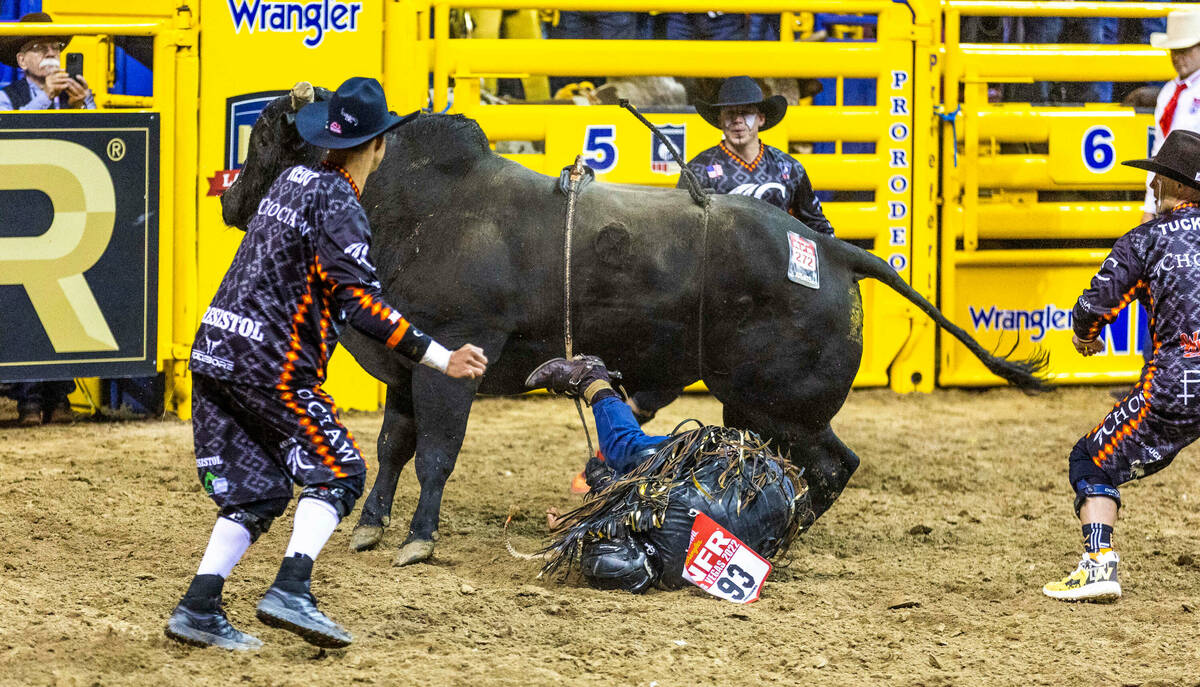 Reid Oftedahl of Raymond, Minn., strikes his head and neck first after falling off of Under The Influence in Bull Riding during the National Finals Rodeo Day 2 at the Thomas & Mack Center on Friday, Dec. 2, 2022, in Las Vegas. (L.E. Baskow/Las Vegas Review-Journal) @Left_Eye_Images 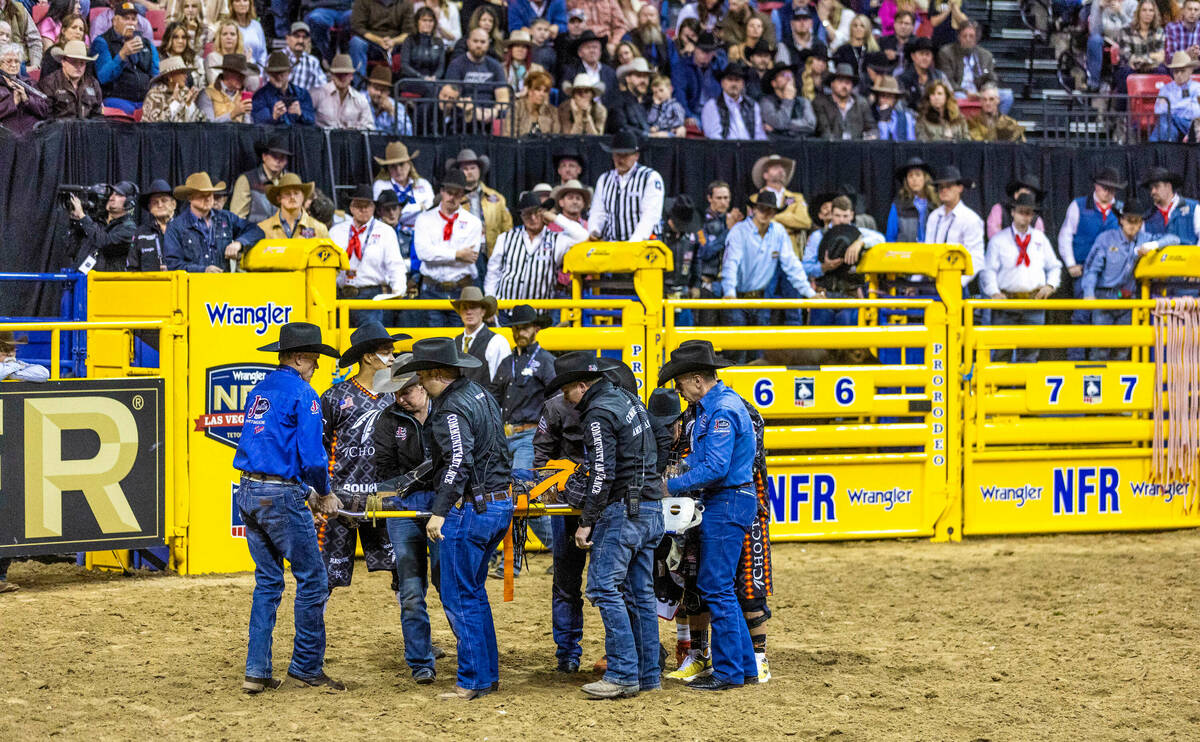 Reid Oftedahl of Raymond, Minn., is carried out of the arena as the crowd looks on after falling off of Under The Influence and landing poorly in Bull Riding during the National Finals Rodeo Day 2 at the Thomas & Mack Center on Friday, Dec. 2, 2022, in Las Vegas. (L.E. Baskow/Las Vegas Review-Journal) @Left_Eye_Images

It’s called a daysheet, and in addition to the lineups for each night’s National Finals Rodeo performance, it has provided the only update on the condition of bull rider Reid Oftedahl since a brief statement was issued Saturday.

OUT it says next to Oftedahl’s name.

The NFR rookie bull rider from Raymond, Minnesota, has been out since Friday night when he was seriously injured aboard Rafter H Rodeo Livestock’s Under the Influence.

Oftedahl was the first man out of the chutes in Round 2. He was thrown forward and clashed heads with the bull, and reportedly was knocked unconscious despite wearing a helmet and face mask. After being tossed from the bull, he landed headfirst in the dirt.

“He was admitted to the ICU at UMC Trauma Center with a head injury and neck injury,” Dr. Tandy Freeman, co-medical director and orthopedic surgeon for the Professional Rodeo Cowboys Association’s Justin Sportsmedicine team, said in Saturday’s injury report.

“I can tell you he’s still in the hospital, but his family hasn’t OK’d the release of a lot of information,” Freeman told the Review-Journal on Tuesday night. “He had a significant head injury. … He’s doing better than he was doing a couple of days ago.

“He is in stable condition and improving. He’s not in a life-threatening situation.”

On Wednesday, the PRCA said no additional information regarding Oftedahl’s condition will be released at this time.

Oftedahl is a member of the Midwest Agri-Commodities team, which said on its Facebook page that he suffered “a small brain bleed and fractured C7 (cervical vertebrae)” and though able to move his extremities “has a very long road to recovery.”

His PRCA bio says he played football, basketball and baseball in high school. According to acquaintances, Oftedahl drives a truck to help supplement his rodeo earnings.

His injury served as a stark reminder of rodeo’s inherent risk and danger, particularly in the bull riding discipline. JR Stratford is also out for the rest of the NFR in his Las Vegas debut after suffering an ankle injury in Monday’s fourth round.

“It’s definitely a dangerous sport,” Tristen Hutchings, Oftedahl’s fellow NFR rookie, said after winning his third bull riding go-round of these Finals on Tuesday night. “You’ve just got to be mentally prepared for it. And once you’re mentally prepared for it, get it it out of your head, because you can’t be scared to get hurt when you’re out there.”

But Hutchings said when one bull rider goes down, all feel his pain.

“After Reid got hurt, there was a big group text, and we just wondered how he was doing,” Hutchings said. “He really didn’t move out in the arena, so we were all pretty nervous for him. Bull riding is a big family, but all of rodeo is a big family.”

A GoFundMe account set up in Oftedahl’s name had raised $57,331 by Wednesday evening. That sum is roughly equal to two round wins at the NFR.

But it was not the kind of check he was hoping to leave Las Vegas with.