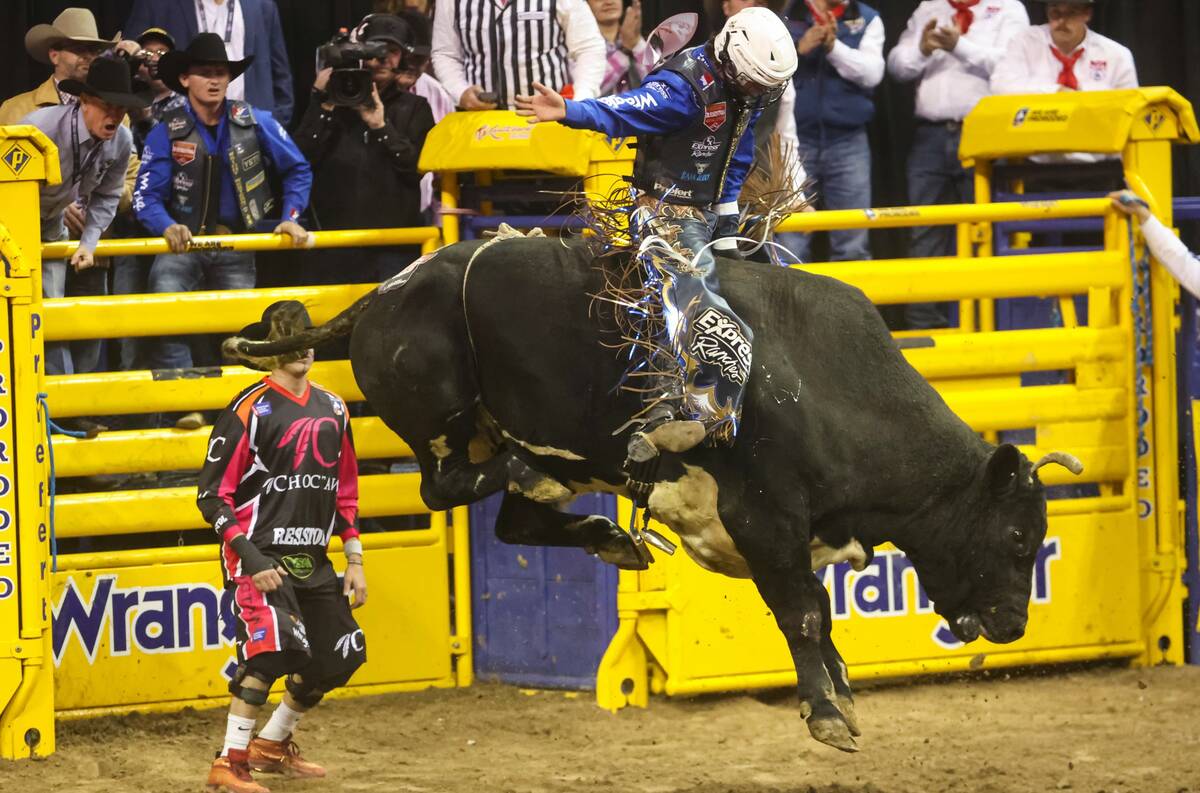 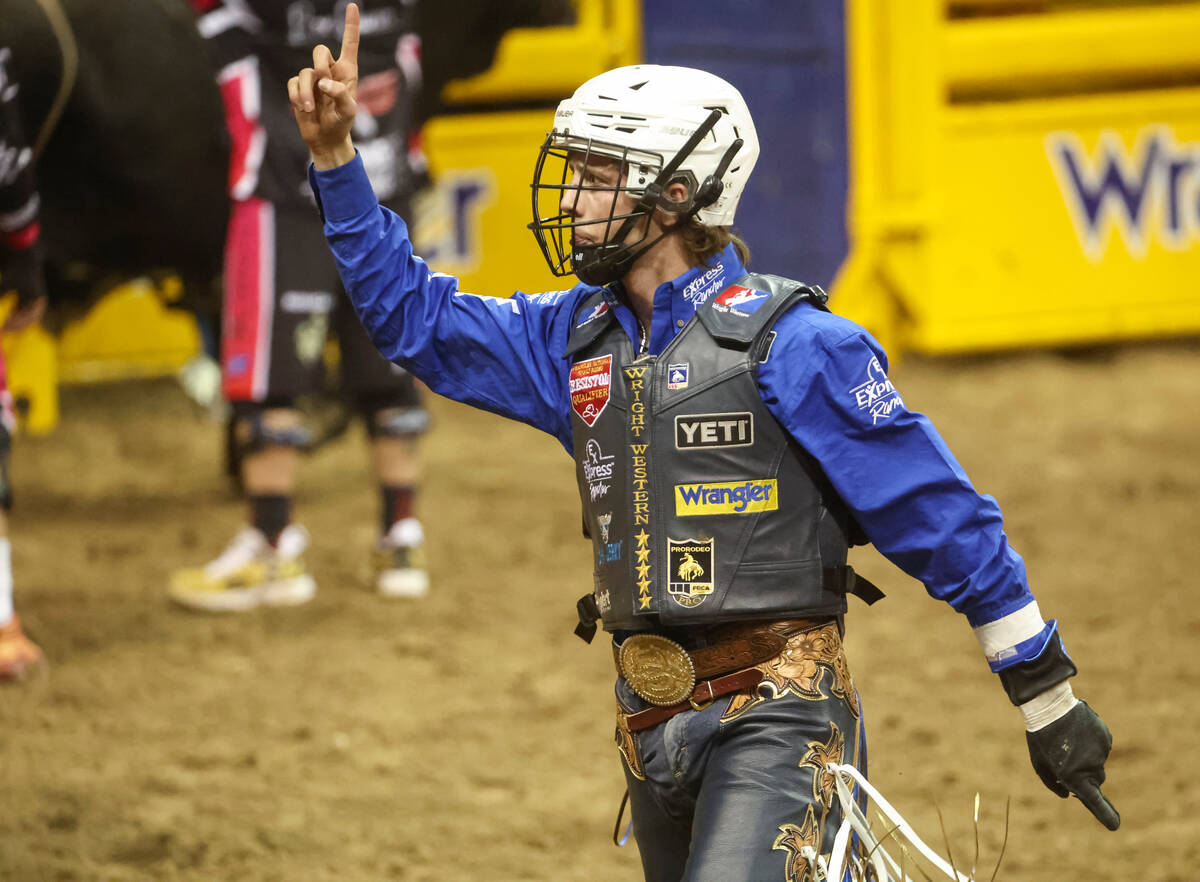 Stetson Wright, of Milford, Utah, celebrates after riding Relentless while competing in bull riding during the fifth go-round of the National Finals Rodeo at the Thomas & Mack Center on Monday, Dec. 5, 2022, in Las Vegas. (Chase Stevens/Las Vegas Review-Journal) @csstevensphoto

With the completion of Monday’s fifth go-round, the National Finals Rodeo has reached its halfway point. Meaning there still are five nights of memorable moments waiting to happen for the world’s best cowboys and barrel racers.

But the most poignant one may have already occurred. It transpired Sunday — not in the Thomas &Mack Center arena, but in the UNLV Lady Rebels’ practice gym in Cox Pavilion that doubles as the NFR media center.

Long after another sellout crowd had lined up for taxis and rideshares back to their hotels, Stetson Wright was talking about his second winning bull ride in four nights. He was asked about the yellow bandana tied to his shoulder.

The bandana is the calling card of the Golden Circle of Champions, a charity that raises awareness and funds for children battling cancer and other life-threatening diseases. The three-time world champion all-around cowboy had interacted with many of the young patients in that afternoon’s special event, and recalling it moved him to tears.

“It’s about kids that are in a much bigger world title race than what we are,” Wright said in a halting voice. “I’m just grateful my family’s healthy, and I’ve got a little girl and, geez, I didn’t think I would get this emotional. But there are much bigger things going on than me winning four (all-around titles), and this is one of them.”

After regaining his composure, the sport’s 23-year-old superstar gave every reporter who had requested a moment of his time at least five or 10 minutes of it for posing less meaningful questions.

“I’m in a good spot right now. I’m not trying to put pressure on myself about any gold buckle,” he said of his stated goal of earning a rare triple championship in the all-around, bull riding and saddle bronc riding at this year’s NFR.

He’s leading the all-around by an insurmountable margin, has padded his big cushion in the bulls and trails leader Sage Newman by around $60,000 in saddle bronc earnings with still lots of time left to catch up.

But he said not everybody in the Wright clan — his brother, Ryder, sits eighth in saddle bronc season earnings — saw the first one Friday night.

Bryson Barnes, Utah’s backup quarterback behind Cam Rising, is Wright’s cousin. Stetson Wright said there were family members who skipped the rodeo to watch the Utes defeat Southern California in the Pac-12 championship game at Allegiant Stadium, and that he was looking forward to supporting his relative at the Rose Bowl against Penn State.

But first he wants to enjoy the rest of the NFR Super Bowl in Las Vegas and hear a few more car horns blare.

“You want to soak up everything — back here doing interviews, sitting in the bucking chutes, being in the locker room (with friendly rivals) or even just driving here and having a hundred people honk at you,” Wright said.

Yes, said the confident but grounded cowboy from Milford, Utah. He even gets beeped at while navigating the bustling Las Vegas thoroughfares that are fast becoming his home away from home.

“Yeah, well, my name is plastered on the trucks, so I never know if it’s that or I’m just driving bad,” he said.