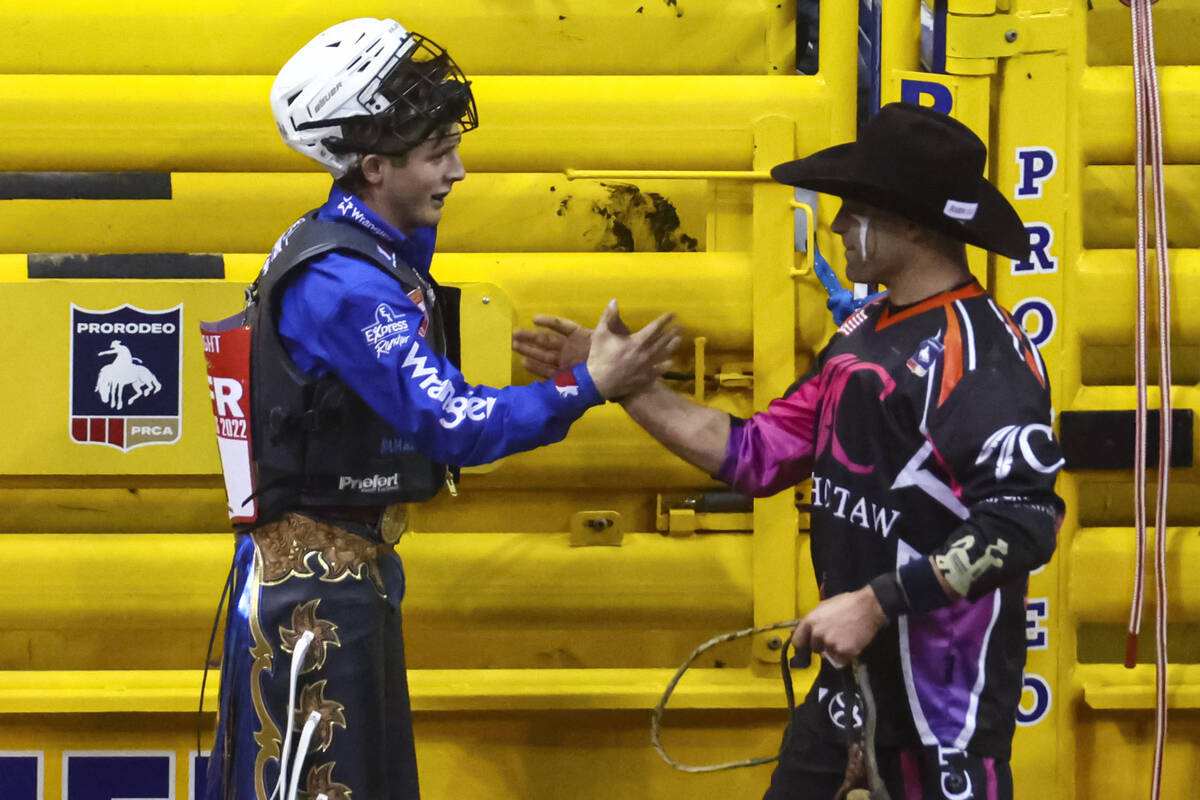 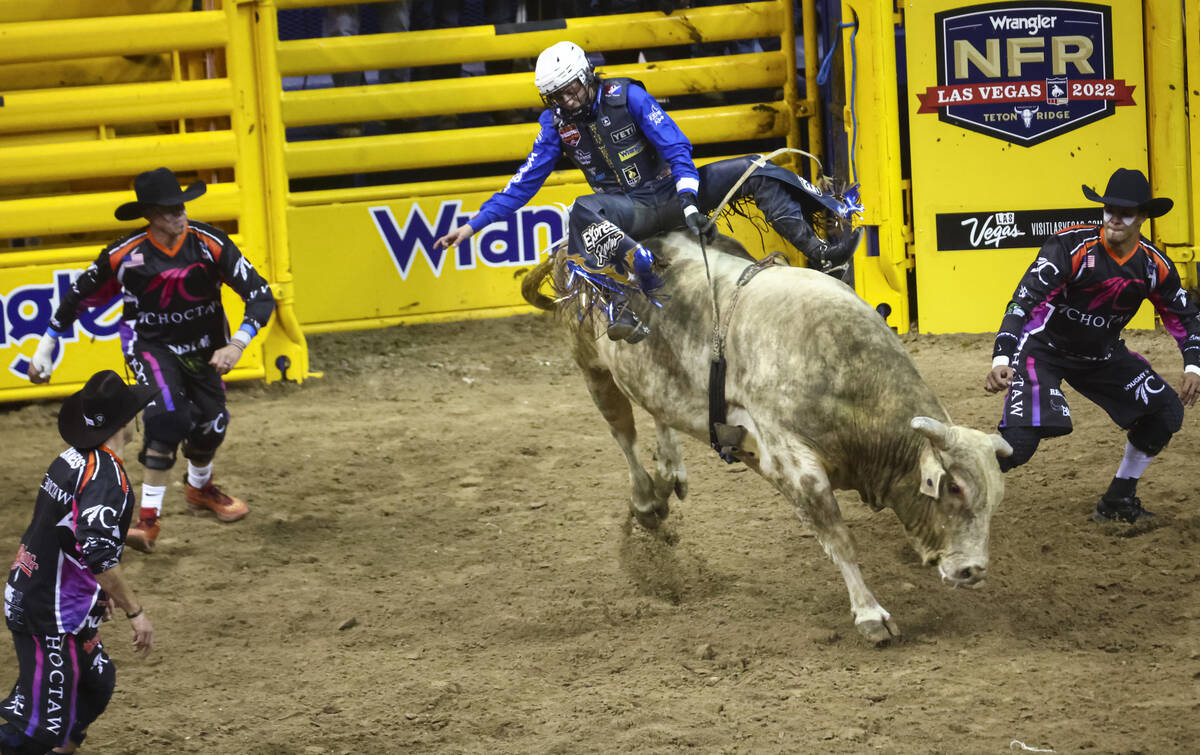 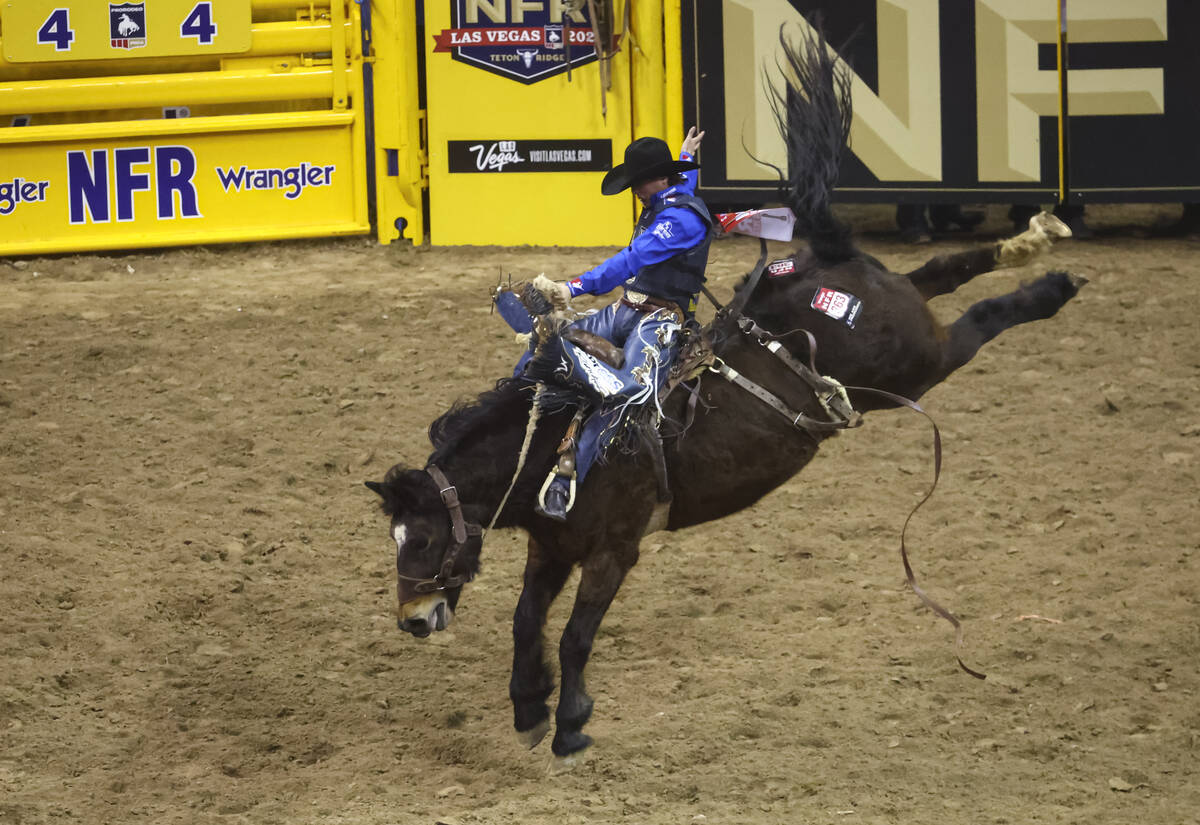 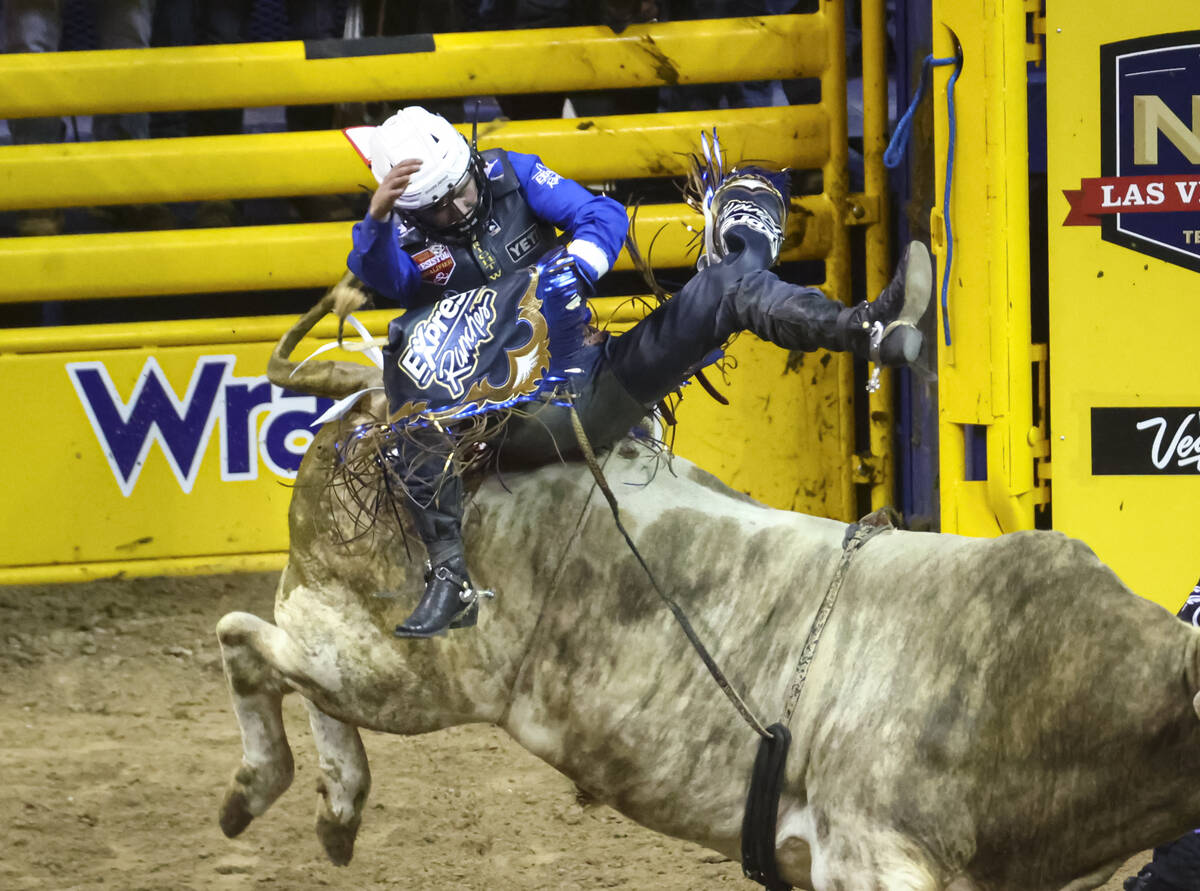 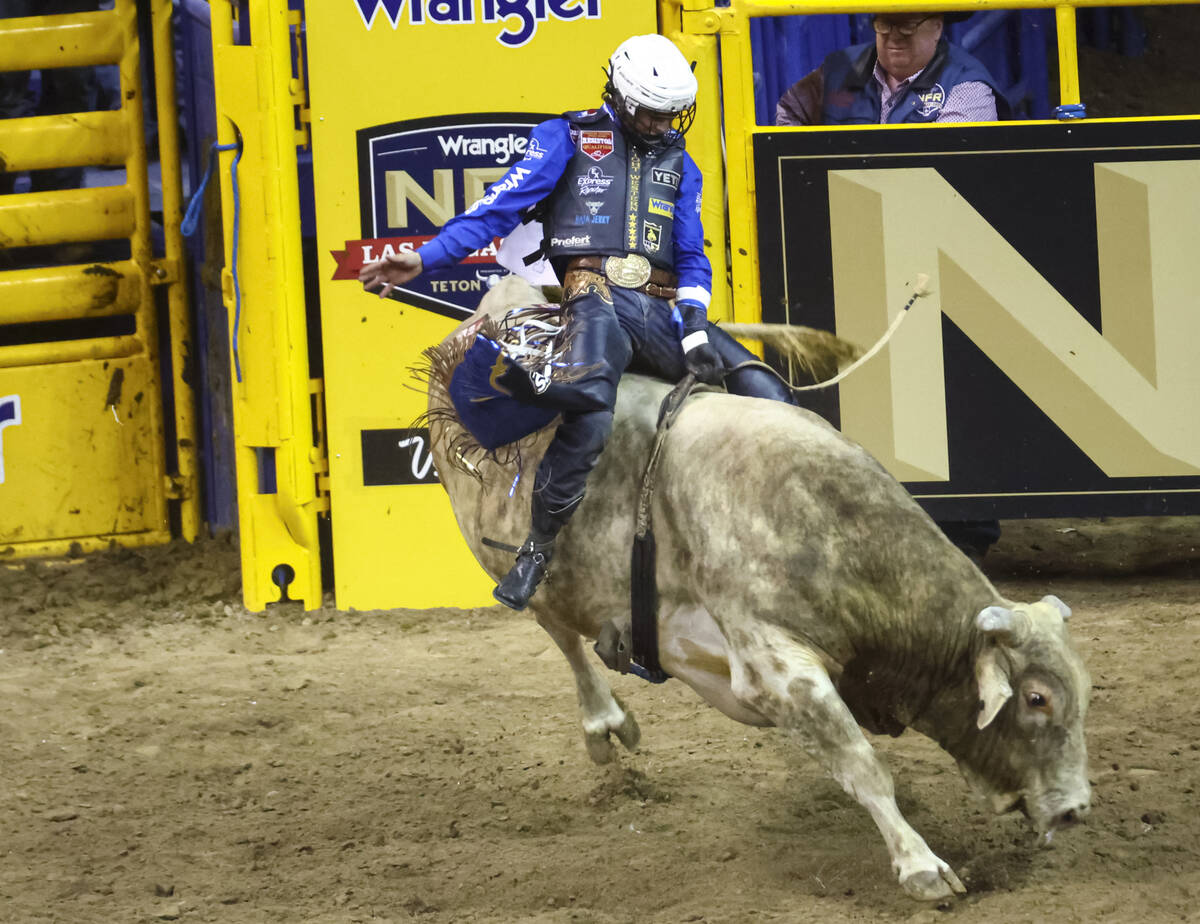 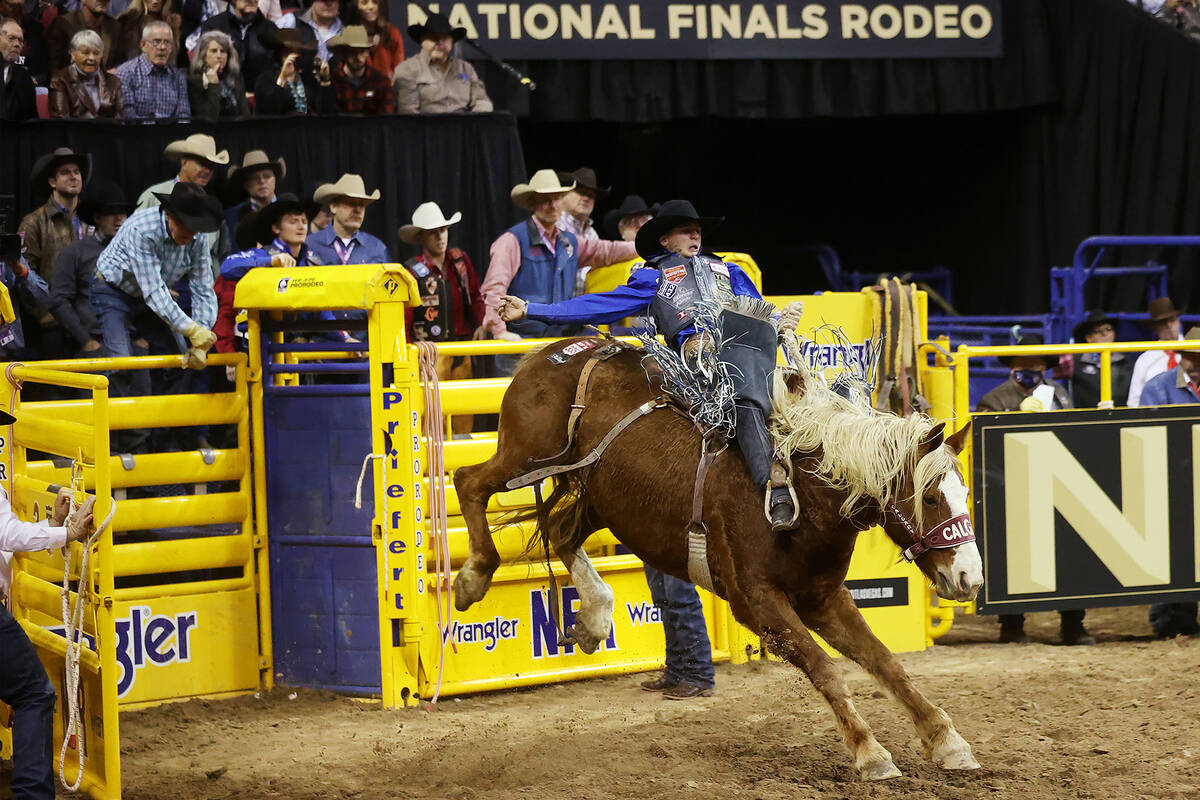 Stetson Wright of Milford, Utah, competes in the saddle bronc riding event during the ninth go-round of the 2021 National Finals Rodeo at the Thomas & Mack Center in Las Vegas. (Erik Verduzco/Las Vegas Review-Journal) 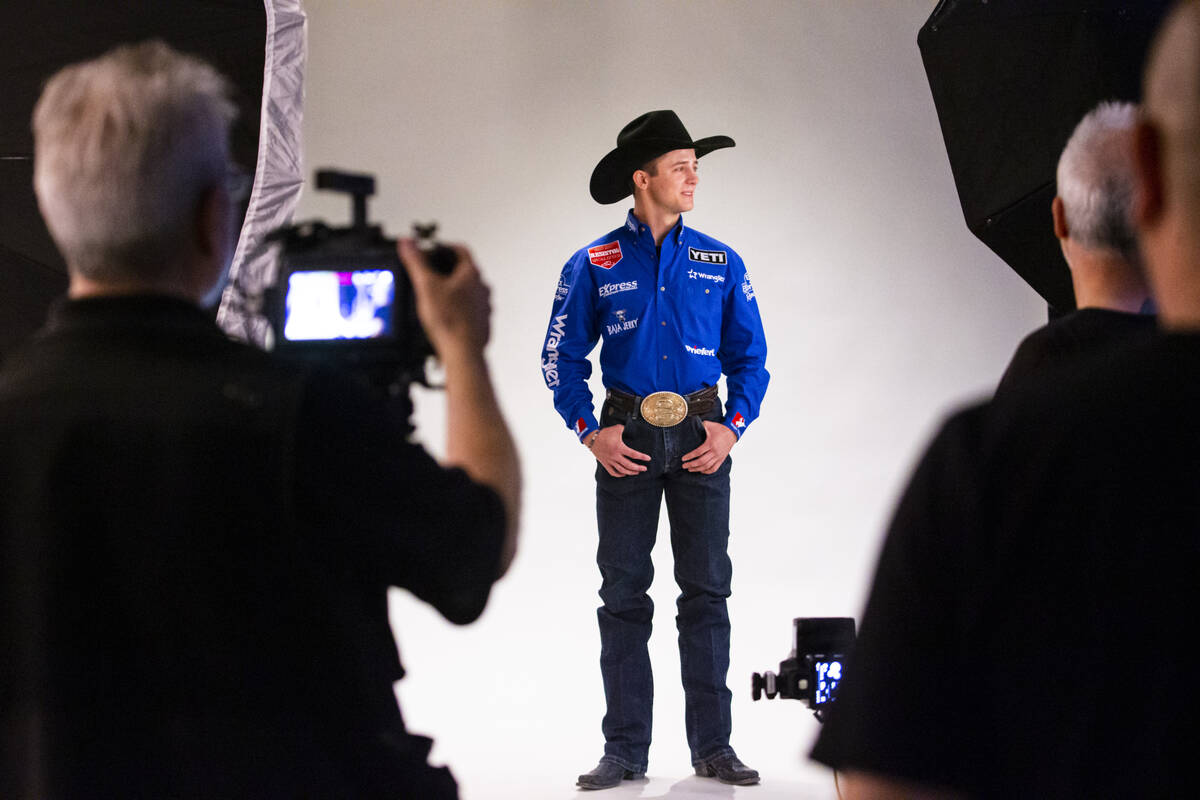 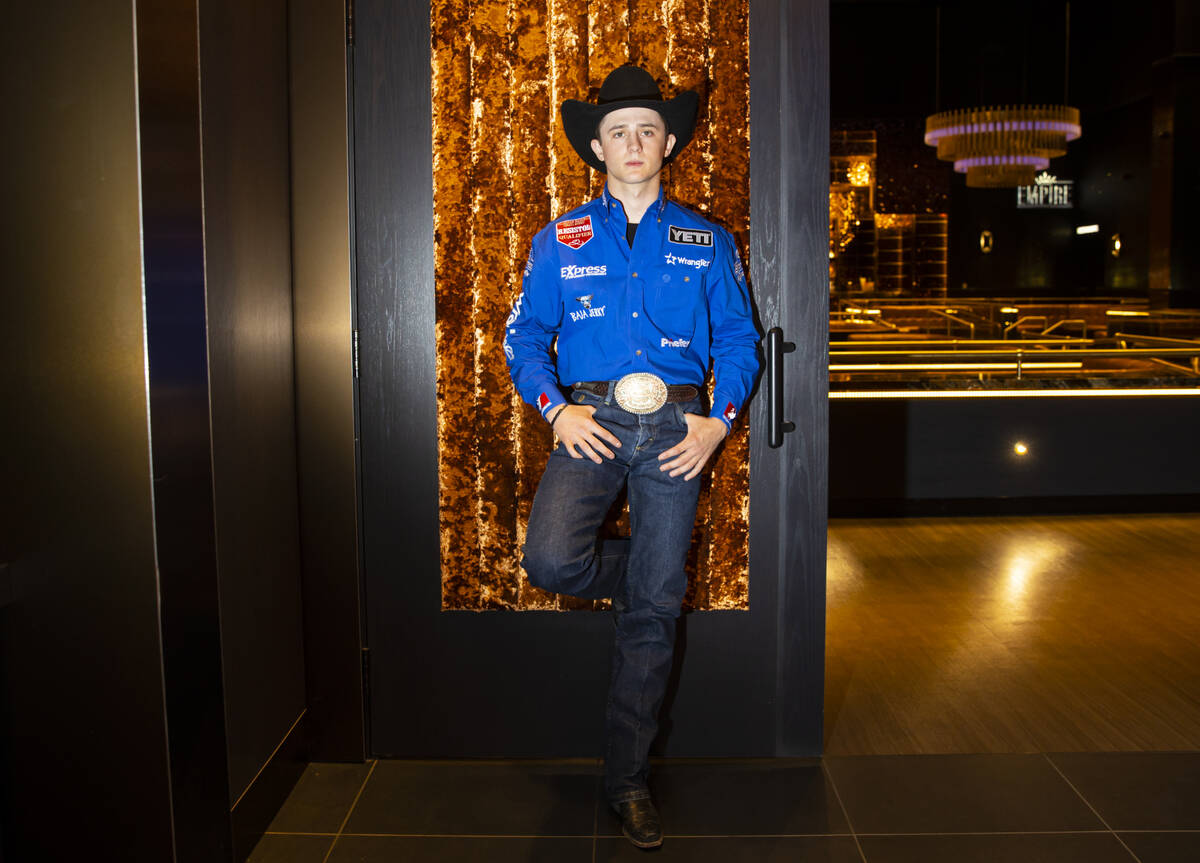 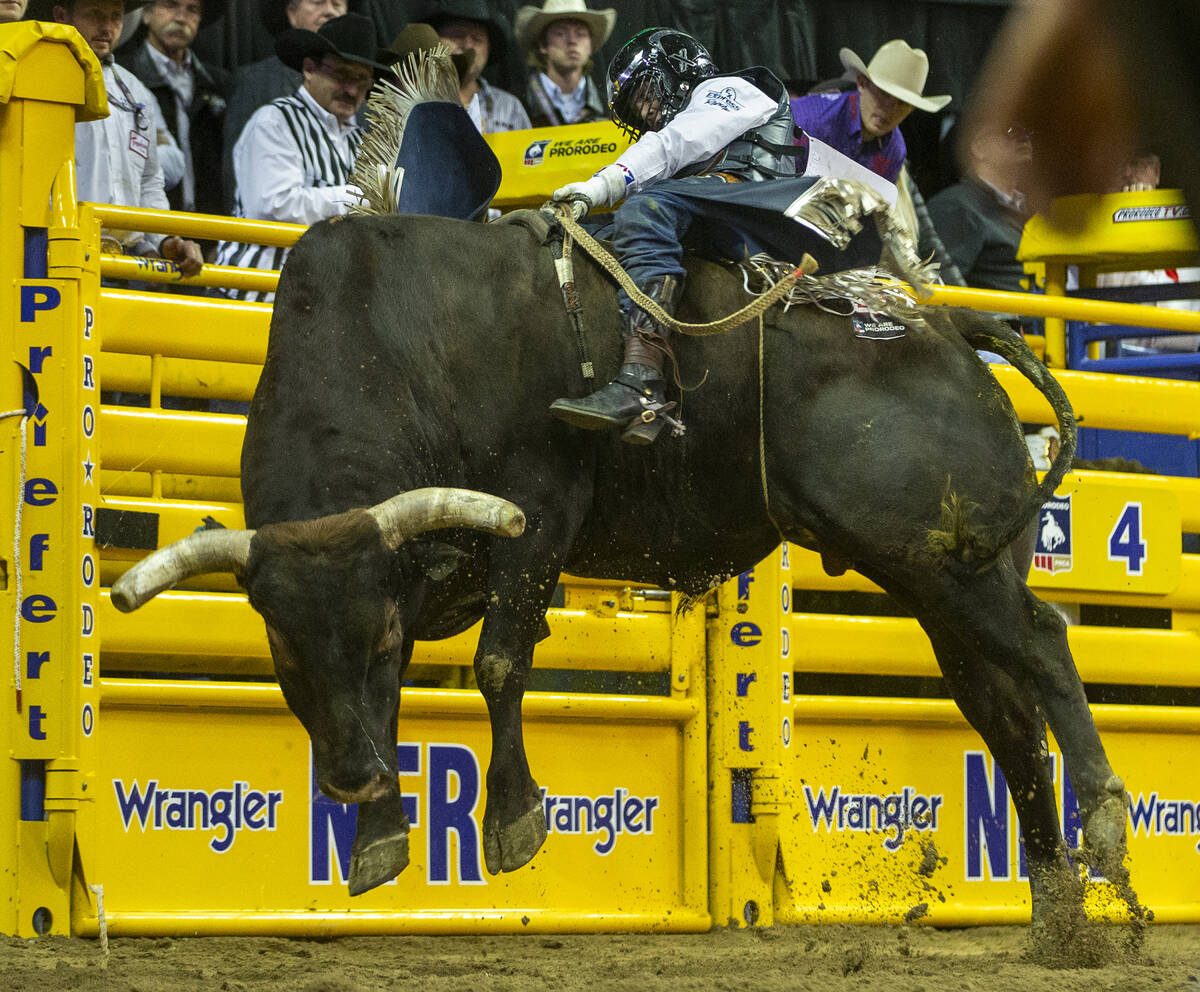 Stetson Wright of Milford, Utah, briefly rides Pickup Man in Bull Riding during the tenth go round of the Wrangler National Finals Rodeo at the Thomas & Mack Center on Saturday, Dec. 14, 2019, in Las Vegas. He was then named the All-Around World Champion. (L.E. Baskow/Las Vegas Review-Journal) @Left_Eye_Images 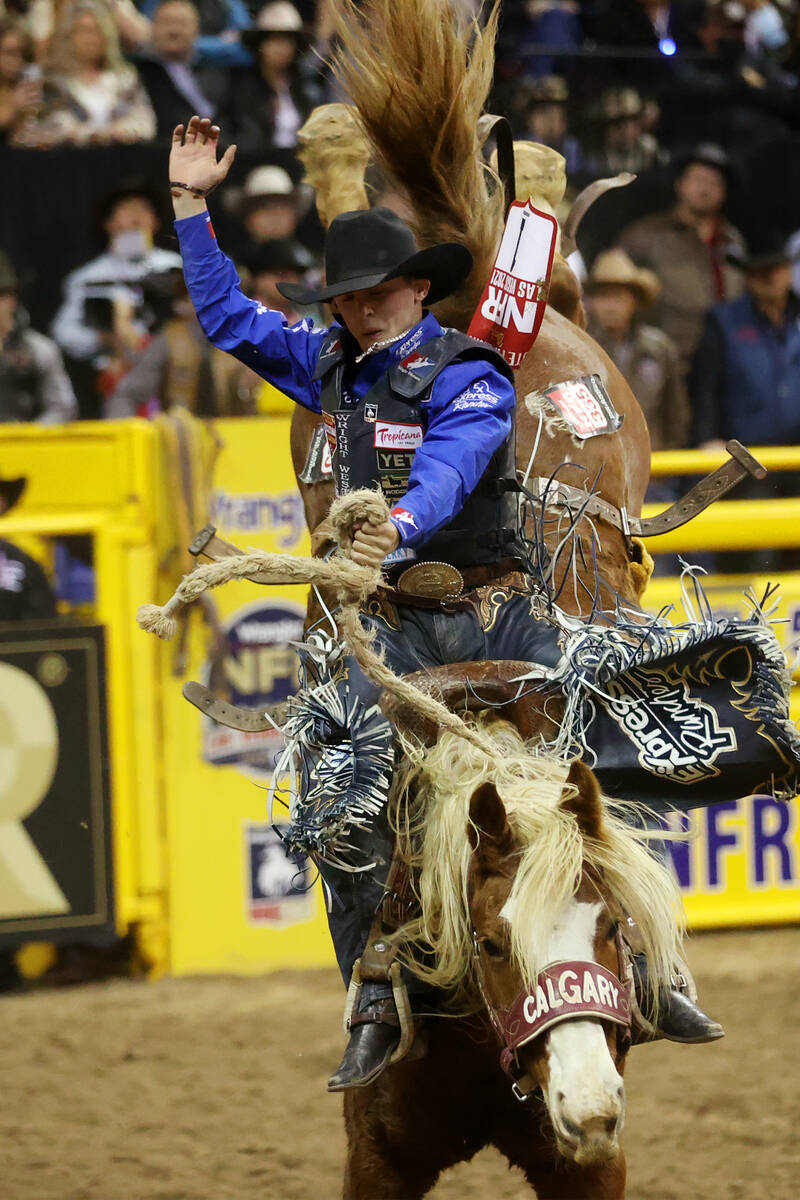 It’s about a three-hour drive down Interstate 15 from Stetson Wright’s spread in Beaver, Utah, on the edge of the Dixie National Forest, to the Thomas & Mack Center in Las Vegas.

The two are 233 miles apart. Or worlds apart. Depending on whether one asks MapQuest or the world’s best rodeo cowboy.

“There’s one stoplight,” says the precocious 22-year-old champion, comparing the bright lights of Las Vegas to the bright light of Beaver. “Just one. And we don’t even need it.”

Beaver’s population consists of 3,115 mostly law-abiding citizens. Beaver has a sheriff’s department that, like the lone traffic signal, really isn’t necessary. At least not in modern times.

Grizzled old-timers in Beaver will remind you that Butch Cassidy was born there in 1866 when Utah still was a territory. But whereas the outlaw was infamous for rustling horses, Stetson Wright is famous for riding them. As well as bulls.

“I don’t think there’s anything that should buck me off,” the precocious cowboy said after edging his aptly named older brother, Ryder, in winning last year’s saddle bronc championship and his third consecutive all-around gold buckle at the National Finals Rodeo.

The young whippersnapper of the Wright clan — Stetson is one of 10 PRCA cowboys in the family — doesn’t always stay in the stirrups for the required eight seconds. But it might seem that way to the other cowboys, at least the ones not named Wright.

Whereas Butch Cassidy had the Sundance Kid, when it comes to pro rodeo’s world all-around standings, Stetson Wright has no equal. By early August, he was leading nearest pursuer Caleb Smidt by more than $150,000 in the championship battle, if you insist on calling it that.

Barring injury, it will take a major upset to keep Wright from winning his fourth consecutive all-around title.

“I think that’s what every cowboy should have,” he says of his positive mindset, and a deep-seated belief he should never finish second to the bronc or the bull or another rider. Even the one named Ryder who shares his surname.

It’s a sentiment that runs deep within the Wright family that had produced 10 pro cowboys — Stetson’s brothers, Rusty, Ryder and Statler; their father, Cody; and Cody’s brothers Jesse, Spencer, Jake, Calvin and Alex — and 11 world championships.

But as Stetson’s grandmother and Wright family matriarch Evelyn said in a 2019 “60 Minutes” feature about her brood of champions, one has to be a real cowboy before he can become a rodeo one.

The tight-knit Wright clan has been running cattle on southern Utah’s Smith Mesa for more than 150 years. According to Pulitzer Prize-winning author John Branch’s 2018 book “The Last Cowboys: A Pioneer Family in the New West,” the family ended up in Red Rock country near what is now Zion National Park during the Mormon migration of the mid-19th century led by Brigham Young.

Zion wasn’t a national park then. It was just a peaceful place consisting of mountains, canyons, buttes, mesas, monoliths, rivers and natural stone arches. There was no admission charge to see it.

But the land the Wright family leases from the federal government keeps getting closer to the park’s ancillary businesses and other tentacles. Zion attracts 4.3 million annual visitors — an increase of 60 percent over the past decade.

Where once the Wrights were surrounded by spectacular scenery, they now are being encroached upon by motels and convenience stores. As Branch writes, the last cowboys of the American West are running out of room to roam.

“My dad owns a ranch near Zion, and we run our cows down there by St. George, and he runs cows in the Beaver Mountains where we live,” Stetson Wright said in May during the NFR’s annual promotional poster shoot in Las Vegas. “He lives on 40 acres. I live on 11. When he started rodeoing, that’s what he put his money into.”

It’s where Stetson probably will wind up putting his money, too.

“I’m in two events, so I’m going a little harder than most guys,” he said about a sport in which guaranteed contracts are nonexistent and a guy must make $70,000 in a given year just to break even on travel and other expenses.

Despite having just turned 23, he is closing in on $2 million in career earnings. But Wright said given what it now costs for gasoline and oil, he probably would be better off as a baseball utility infielder.

“I just a bought a new truck and it’s already got 20,000 miles on it,” he said during a break in the aforementioned photo shoot.

After posing for the professional shutterbugs under bright lights to which he is rapidly growing accustomed, pro rodeo’s new superstar seemed relaxed and in a good place — even if they were pumping air that smelled of lilacs into the swank Zouk nightclub at Resorts World Las Vegas.

“Probably the best start to my year as far as bulls and broncs together,” Wright said about the formality of winning his fourth all-around title and achieving other goals on his immediate horizon.

He even mentioned the possibility of earning a rare rodeo triple crown when he returned to the Thomas & Mack Center in December.

Leading the all-around and bull riding by healthy margins and sitting a well-positioned fourth in the saddle bronc standings, taking home all three gold buckles seemed well within his reach.

Before a lucrative rodeo in March called The American at AT&T Stadium in Arlington, Texas, he even spoke of some day surpassing Trevor Brazile’s record collection of 14 all-around cowboy gold belt buckles during the filming of a promotional video.

“My goal is to win 15 — I never stop at being second best,” Wright said with a bashful smile that partly disguises an understated confidence in his considerable talent. But during his Las Vegas visit, he sounded more pragmatic about traversing the long, winding and dusty road to overtake Brazile.

“Play it day by day, I guess. Anybody who watches the sport knows that each time you get on could be your last.”

It turned out to be a bit of foreshadowing. After aggravating a wrist injury at the Greeley (Colorado) Stampede in June, Wright had surgery and missed about 10 days of riding broncs and bulls while he recuperated.

“Sometimes when guys get to the professional ranks — especially if you’re competing in multiple events — and you start getting sore or tired or even a little hurt, you see guys maybe go in the other direction,” said Ty Murray, the Stetson Wright of his generation, about the challenges of staying motivated when adversity — or a bull or bronc — rears its head.

Murray, 53, won his first all-around title a few weeks after turning 20 in 1989 and had accumulated seven by the time he was 29.

By then, Murray said he was sore and tired and a little bit hurt. So he went in another direction. He jumped to the Professional Bull Riders tour that offered big purses with far less travel.

“My last rodeo was the ’99 NFR, but that was an afterthought after I won my seventh all-around in ’98. After that NFR, I never went to another rodeo,” Murray said.

But he likes what he sees of Wright and says the Utah cowboy, who is both shorter and less broad than Murray, has the ideal body and low center of gravity to go along with considerable skill that seems to keep improving.

“If he can avoid injury, I think he can win as long as he wants to,” said the legendary cowboy, suggesting that it’s going to take more than the lone traffic light in a sleepy Utah town to slow the next one in the making. ◆