Perhaps he was born to ride bulls and horses. With a last name like Wright, there probably wasn’t much of a choice.

And, at age 20, Stetson Wright accomplished something his father, Cody, hadn’t done. Nor his uncles, Jesse and Spencer. Nor his older brother, Ryder. He won the Professional Rodeo Cowboys Association all-around world championship Saturday night at the National Finals Rodeo at the Thomas & Mack Center.

He’s the best cowboy in the world.

Wright won his first PRCA world championship with $297,922.56. It’s the most prestigious title on the tour, reserved for the cowboy who makes the most money while competing in multiple events.

“I’ve done it for so long, my family knows I do it. I don’t really have much to say about that,” said Wright, the first roughstock cowboy to win the all-around title since 1998. “Hopefully many more.”

“I’ve been dreaming about it since I was a little kid,” Wright said. “I just want to enjoy this with the family. I couldn’t be happier right now.”

Clayton Biglow said he felt as if he was dreaming after winning his fourth consecutive go-round Thursday. He’s not dreaming anymore, though.

Biglow, a 24-year-old from Clements, California, won his first world title by finishing with a PRCA record total of $425,843 — almost $130,000 clear of runner-up Orin Larsen. The four consecutive go-round victories also are an NFR record, eclipsing Kaycee Feild’s mark of three in 2011.

“I literally laid in bed every night for the last three months thinking about this moment,” said Biglow, who scored a 93 in the final go-round and won the NFR average. “That gold buckle is going right on my belt.”

Ty Erickson won one go-round at the NFR.

Turns out that was all he needed.

The 29-year-old from Helena, Montana, won the regular season and made $88,410.25 at the NFR to finish with $234,491.09 and his first championship. He had qualified for the NFR in each of the past five years and finished second in the world standings in 2017.

“It’s been a trying 10 days for me,” said Erickson, winner of the ninth go-round in 3.6 seconds. “We just kind of persevered and kept going at them every night, trying to make the best runs we could. It started clicking and coming together.”

So a team roping title will have to do.

“Anything you do it once, you want to do it again,” said Smith, a defending team roping world champion from Texarkana, Texas. “This is the best in the world as far as the crowd and the money. There’s no other feeling like this in Las Vegas.”

“Staying on top of your game is the hardest part,” said Thorp, of Throckmorton, Texas. “It was a struggle the whole way.”

Zeke Thurston grinned as he clutched his championship belt buckle.

“I was wanting the second world title way worse than I was wanting that first one,” said Thurston, of Big Valley, Alberta. “A little stressful there throughout the week, but there’s a reason you’re here. I don’t even know what to say.”

Haven Meged was one of the best rookies in the PRCA this season.

He has a world title to show for it now.

She ensured that he’s not the only 2019 world champion in the household.

“It’s really special. It’s been a great year for us,” the 25-year-old Kinsel said. “We got married two months ago. People were asking how married life is. Well, pretty dang good right now.”

Another world title for Kimzey.

“This year was just a grind,” said Kimzey, of Strong City, Oklahoma. “From word go, it wasn’t easy. It kind of set the stage all year, how it was going to go.”

Stetson Wright, 20, won his first PRCA world championship on the final night of the National Finals Rodeo at the Thomas & Mack Center in Las Vegas.

Bullfighter Dusty Tuckness talks to the RJ on the final day of competition at the National Finals Rodeo in Las Vegas.

Ty Erickson tackled his steer in 3.6 seconds to win the ninth go-round at the Thomas & Mack Center and move ahead of J.D. Struxness in the world standings with one go-round left.

Boyd Polhamus, the longtime announcer who called the NFR 28 times, moved into a new role this year as the rodeo’s general manager and supervises the production of the 10-day event.

Qualifying for the NFR capped an enjoyable season for the Kimzey brothers, who traveled together much of the year. 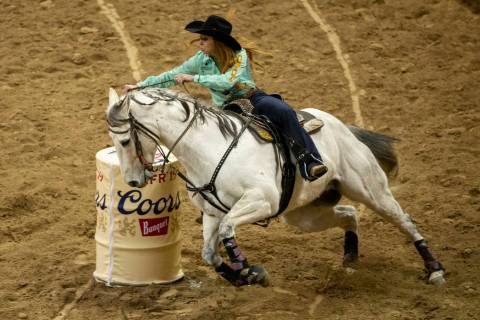 Emily Miller’s earnings at the Calgary Stampede helped her qualify for her first National Finals Rodeo.