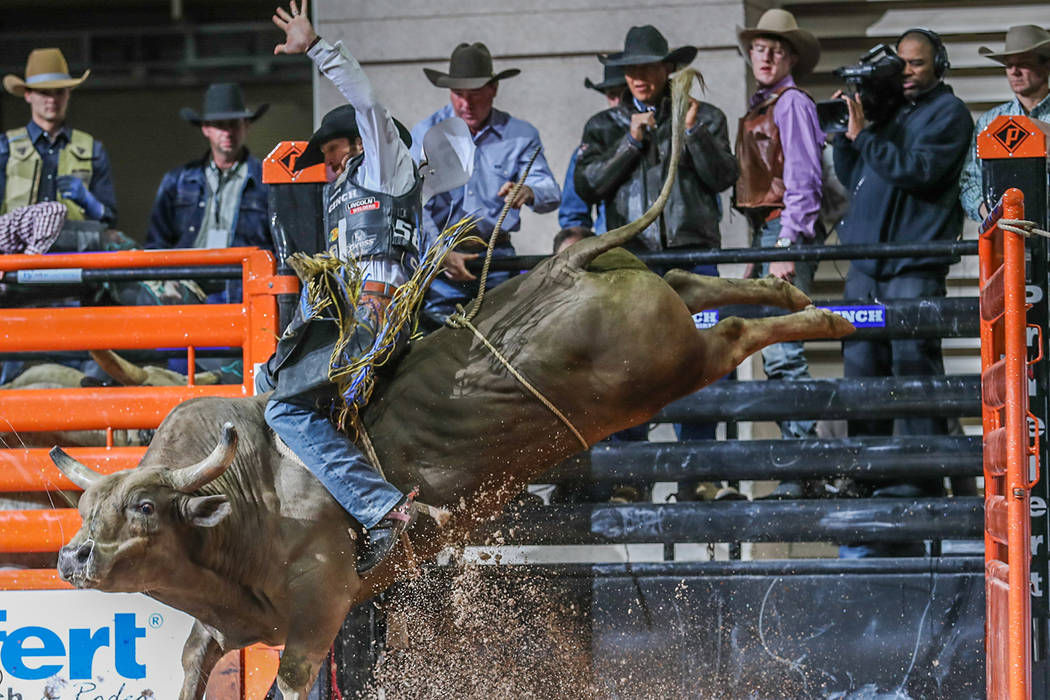 Since 1985, the Wrangler National Finals Rodeo has taken over the city for 10 days each December, bringing with it 120 contestants who rode, roped and wrestled their way to a qualifying spot. But there are boatloads of talented riders, ropers and wrestlers beyond those 120.

So with all these cowboys and cowgirls already in town, and all their loyal fans too, it only made sense to add new events around the Wrangler NFR. Three such events dot the schedule this week: the Cinch Boyd Gaming Chute-Out, the World Series of Team Roping and the All In Barrel Race.

“It made sense to have another western lifestyle event in the arena,” said Jackie Ferrando, director of event marketing for Boyd Gaming. “We have the arena panels, dirt, horse stalls, etc., while so many rodeo fans were in Las Vegas. The response has been fantastic. We’ve grown the Chute-Out year over year, not only for the competitors, but also for the spectators.”

The World Series of Team Roping is arguably the trailblazer for these ancillary rodeo events, drawing thousands of ropers to the South Point Arena & Equestrian Center. Now in its 12th year, the World Series stretches over nine days, with this year’s competition getting underway today in the 2 p.m. Super Qualifier. The WSOTR season finale then runs Sunday through Dec. 16, with action starting at 8 a.m. each day, and on Dec. 17, there’s another Super Qualifier at 8 a.m.

“When Michael Gaughn built the equestrian center, he wanted to create a cowboy event that would complement and coincide with the Wrangler NFR,” said Denny Gentry, founder of the WSOTR. “Since team roping encompasses all the other horse disciplines combined, it was obvious that team roping should be the event. Clearly, the Wrangler NFR in December was a huge draw for the roping event, but as momentum built, it became obvious the event had created its own draw and began to exceed the payoff at the Thomas & Mack Center.”

Indeed, the WSOTR main event will pay out more than $11 million in prize money this year. And it’s free to attend, which is always a nice perk for fans.

The All-In Barrel Race is back for its second year, though at a new venue. Barrel racers competed last year at the World Market Center, but this year will move into Orleans Arena after the Boyd Chute-Out wraps up. There are two three-day segments of competition: Sunday-Tuesday, and Friday-Dec. 17.

Ferrando said the ancillary competitions around the Wrangler NFR are a matter of a rising rodeo tide lifting all boats.

“They are all complementary of each other, giving rodeo fans many choices for spending their time in Las Vegas, as well as extending their stay so they can attend several of the events,” she said.

Gentry said the benefits all over town are almost too numerous to mention.

“The combination of pre-Christmas shopping, vacation venues, the Wrangler NFR, the ability to rope for millions of dollars each day (at the World Series), now the addition of other events trying to duplicate WSOTR,” he said. “And the unheard-of concept that well over $22 million will be distributed within the cowboy world in one week. This is an unprecedented time within the Western lifestyle.”