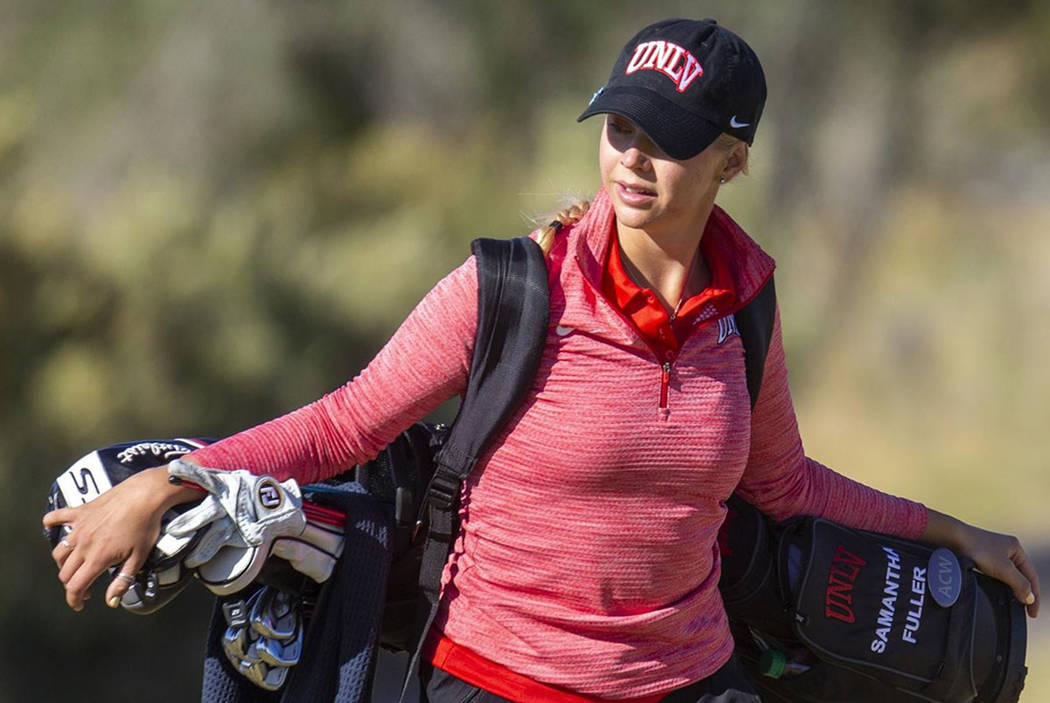 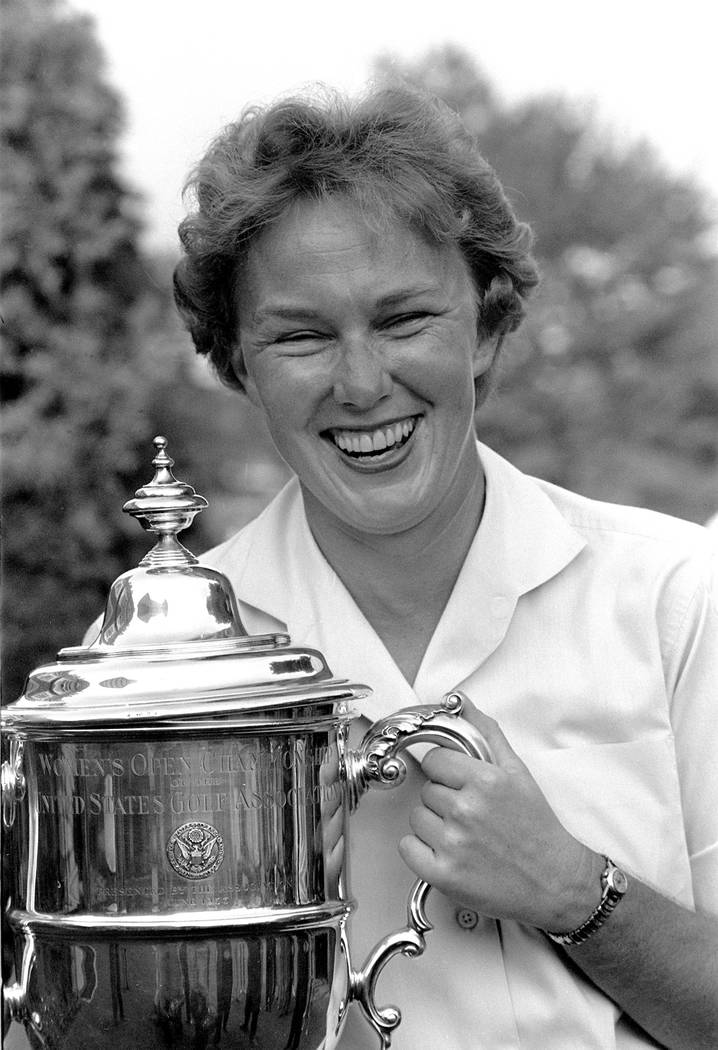 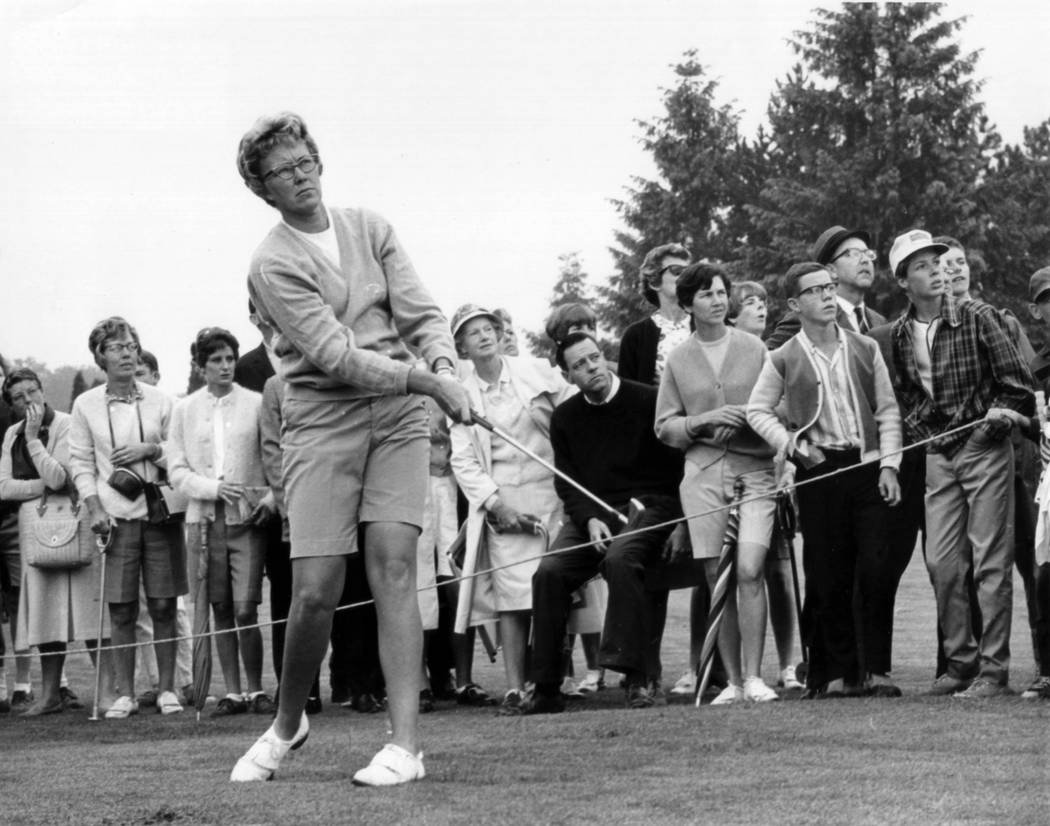 The gallery follows Mickey Wright's iron shot from the fairway at the Toronto Golf Club in 1967. (AP Photo, File)

The tournament was co-hosted by UNLV and Long Beach State, and was the first spring competition for Rebels. Third-ranked Southern California won by 22 strokes over Fresno State. USC’s Gabriella Ruffels and Allisen Corpuz finished first and second, respectively.

“I am very excited for Sami to come out and start the spring strong,” UNLV coach Amy Bush-Herzer said. “As a team, we ended the fall on a high note, but after a finish like this, we have some things to learn and that is what is exciting about coaching; teaching these young athletes.”

World Golf Hall of Famer Mickey Wright, 85, died Monday. She won 82 LPGA Tour events and 13 majors, including a stretch of 44 wins from 1961-64. Two of those victories came at the 1961 and 1963 LPGA Championship, which was played at the Stardust Country Club, now Las Vegas National.

“Bringing the LPGA Championship — a major — to Las Vegas was a coup, especially in those days,” Las Vegas and Stardust course developer Irwin Molasky said a few years ago. “It was another coup to have a lady like Mickey Wright win that first tournament.

“She was the best player and had been around for many years. I played with her in the pro-am, and she just told me how fantastic the event and course was. She was glad to be here and all of the ladies loved Las Vegas.”

She retired from full-time competition in 1969 when she was 34. No telling how many times she could have won.

Wright won the LPGA Championship and the U.S. Women’s Open in 1959. That began a seven-year stretch in which she won 59 times and 12 majors. She won at least 10 times a year for four successive years, and she still holds the LPGA Tour record for 13 wins in a single season.

“In her time, because of her enormous skill, she got the LPGA a lot of kudos from men in the game,” Rankin said Monday night from her home in Texas. “That’s happening a lot more today. In that time, it didn’t happen at all. In Mickey, I think the men saw something else. That was really good for us.”

Taylor Montgomery and John Oda stand 14th and 15th respectively on the Korn Ferry Tour money list at this early stage in the season. The Top 25 at season’s end (August 30) advance to the PGA Tour.

Montgomery closed with a 64 on Sunday to finish second at the LECOM Suncoast Classic in Lakewood Ranch, Florida. Montgomery, a multiple champion of Major Series of Putting events in Las Vegas, ranks fifth in putting, 17th in driving distance (312 yards) and 18th in scoring average (69.72) on the tour.

Former UNLV golfer Adam Scott won the Genesis Invitational at Riviera in Los Angeles on Sunday. It was his 14th PGA Tour victory. In the last 20 years, only Scott, Tiger Woods, Rory McIlroy and Ernie Els have at least 10 wins on both the European Tour and PGA Tour.

Associated Press contributed to this report. The golf notebook appears Wednesdays. Freelance writer Brian Hurlburt is a two-time author who has covered golf in Las Vegas for more than two decades. He can be reached at bhurlburt5@gmail.com or @LVGolfInsider.