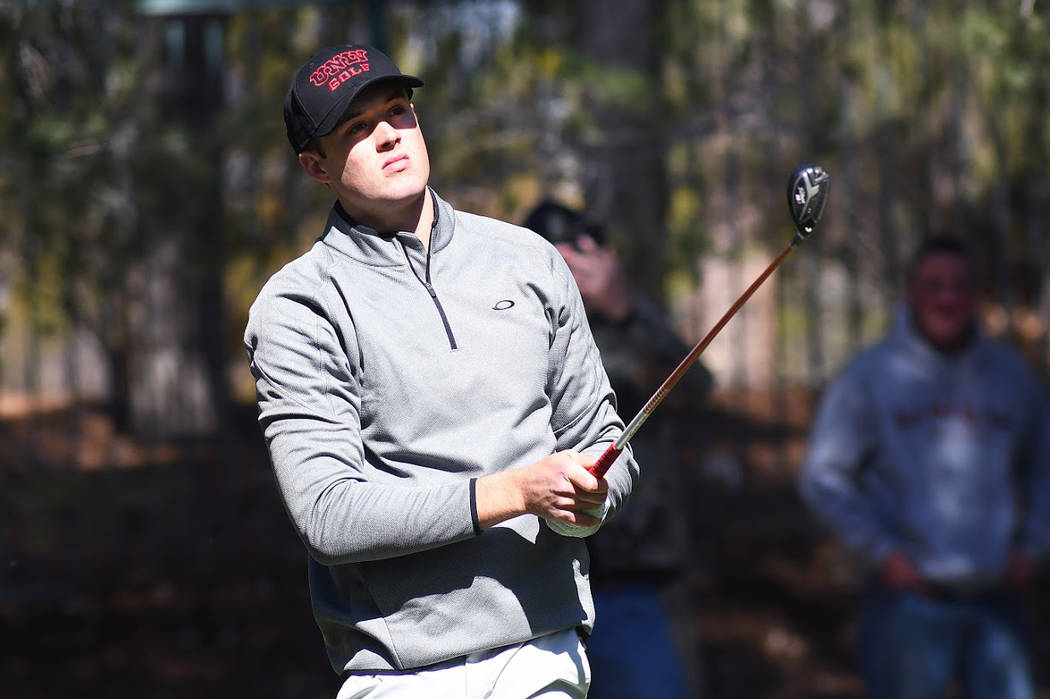 Jack Trent, the 2019 Southern Highlands Collegiate champion, tees off in round one in 2020. UNLV finished 13th as a team and Trent finished 43rd. (UNLV)

The 36th-ranked Trojans shot a final-round 3-over 291 and finished at 3-under 861, two strokes ahead of eighth-ranked Texas. The tournament included the top-five ranked teams in the nation and nine of the top 25.

Parker Coody of Texas and Yuxin Lin of USC tied for medalist honors at 8-under 208, but Coody’s par on the first playoff hole gave him the title and exemption into the Shriners Hospitals for Children Open at TPC Summerlin.

The tournament was live-streamed at Golfweek.com, and Scott MacDonald, CEO and co-founder of College Golf Live, said college golf continues to grow in popularity.

“I think there’s two main reasons for the growth,” MacDonald said. “The first is that college golf has always been the primary feeder of the PGA Tour, and that continues to happen. About 75 percent of PGA Tour players ranked in the top 100 played college golf.

“The second is that golfers are getting better at a younger age. There’s a trend over the past eight or so years of college stars immediately making the jump to success on the PGA Tour.”

Hoop it up, golf style

The “It’s Game Time” basketball-themed scramble is March 15 at Legacy. The two-person scramble is $125 per player and includes a golf shirt, two sleeves of Callaway Supersoft balls, raffle and lunch.

Nicklaus Design and Golf Magazine have created a contest in which golfers can submit their visions and designs for the perfect par-4 hole. The winning entry will inspire a par 4 on an actual Nicklaus Design course, and the creator receives an all-expenses paid trip to Palm Beach Gardens, Florida, a tour of design headquarters and a round of golf at a Nicklaus course.

Submissions will be accepted through March 15 at GOLF.com/designcontest.