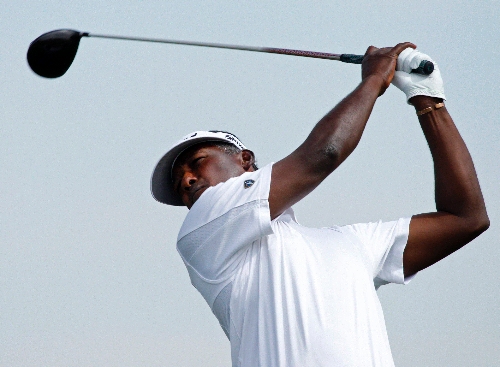 This is what hard work can get you: A resume with 34 PGA Tour wins, 28 others professionally, three major championships and slightly more than $67 million in career winnings.

This is what popularity gets you: not near as much.

Vijay Singh isn’t who you want warming up an audience before a stand-up comedian takes the stage. I’m not even sure he is who you want selling tickets for fear patrons will be too somber to enjoy themselves.

This is not a life-of-the-party guy, but he might be the guy you give wrong directions to the party.

But passion is another matter and determination an entirely different trait by which to judge Singh, because however surly and aloof and indifferent he is perceived to be (or really is), golf has known few players who have put in more hours to be great.

He was elected to the World Golf Hall of Fame in 2005 at age 42, the youngest in history, and is one the best shot-makers to swing a club.

He also hasn’t won a tournament since 2008, which might cause another nearly four months shy of his 50th birthday to doubt whether being atop a leaderboard at the end of any Sunday is again possible.

“If the desire ever loses me or goes away,” Singh said, “I’m going to quit.”

Prediction: He is countless 600-yard par-5s away from that.

Prediction II: He will wear John Daly’s rainbow-striped pants and a lampshade during rounds before walking away anytime soon.

Singh is here to play the Justin Timberlake Shriners Hospitals for Children Open because – what else? – he has added tweaks to his swing and wants to see how they work against competition.

So far, so impressive.

Singh shot his second consecutive 5-under-par 66 on Friday and sits at 10 under at TPC Summerlin, four shots off the lead and alive to break that four-year drought without a win.

“The standard of play has risen quite a bit, and if you slip up, there are 10 guys who are going to go by you,” Singh said. “You can’t make any mistakes if you’re in the lead or near it. You have to keep improving your score. Nowadays, par doesn’t help. You have to make birdies, especially on a course like this.”

This is as close to an orator as Singh will get with anyone holding a tape recorder or notebook. He double-bogeyed the par-4 18th on Friday and disgustingly tossed his ball into the water, and those media members with thoughts about chatting with him immediately dwindled.

Not that many planned on doing so, anyway.

No one ever is going to describe Singh as accommodating – he won the FedEx Cup and its $10 million prize in 2008 and reportedly didn’t bother to show up to the press room afterward – and despite what some of his close friends suggest in terms about his true personality being more engaging than we witness, those who follow the tour weekly never have viewed him as anything much beyond standoffish.

Which has nothing to do with his talent.

Peers have described his swing as powerful, athletic, balanced, effortless. Singh is as old-school as it gets when it comes to beating ball after ball, hour after hour, year after year. He turned pro in 1982 and has been the last one off a range at day’s end ever since.

“I don’t think anyone has made more birdies than Vijay over a long career like his,” said Davis Love III, 48. “We always tease him that he practices too much. I’m most amazed with his dedication. We both know that if we don’t continually work on things, we’re going to fall behind these kids.

“He and I were out here putting late (Thursday), and I told him, ‘It’s funny. The two oldest guys in the field are the ones out here working.’ Vijay has been a good putter and a great putter and an inconsistent putter. But he just seems to keep bouncing back. He is definitely one of the best ball strikers to ever play the game.”

I can’t believe Singh was ever considered the coolest kid on any block when growing up in Fiji, and it’s a good thing for him that one’s likability score doesn’t determine PGA Tour success.

Outworking people, though, is something much different.

In this way, his popularity is off the charts.

You know, in a surly, aloof, indifferent sort of way.