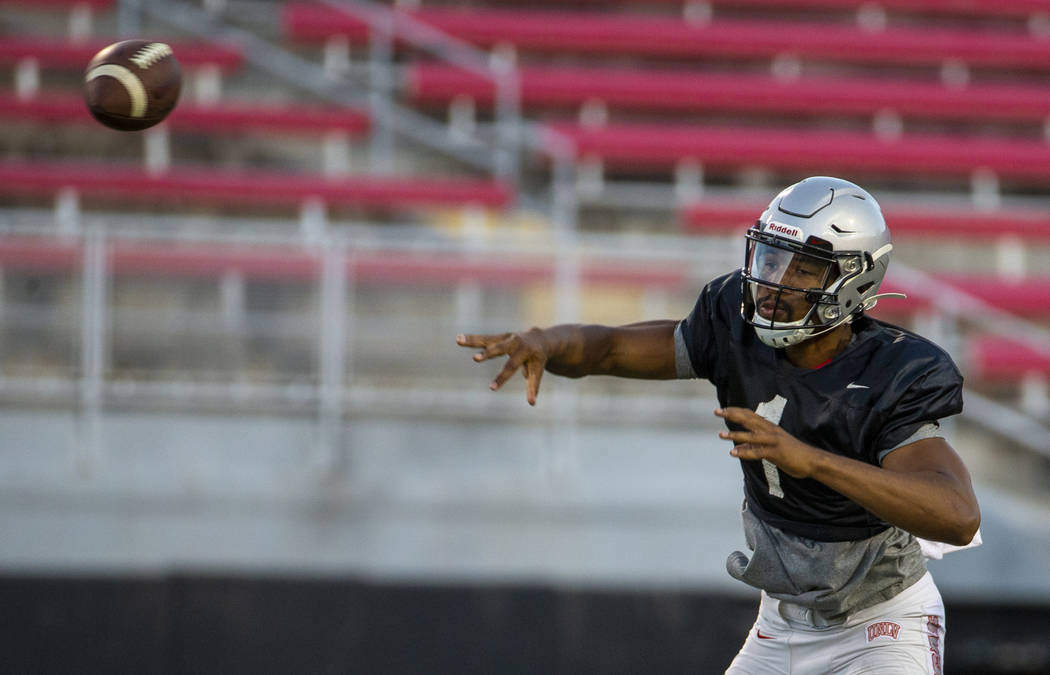 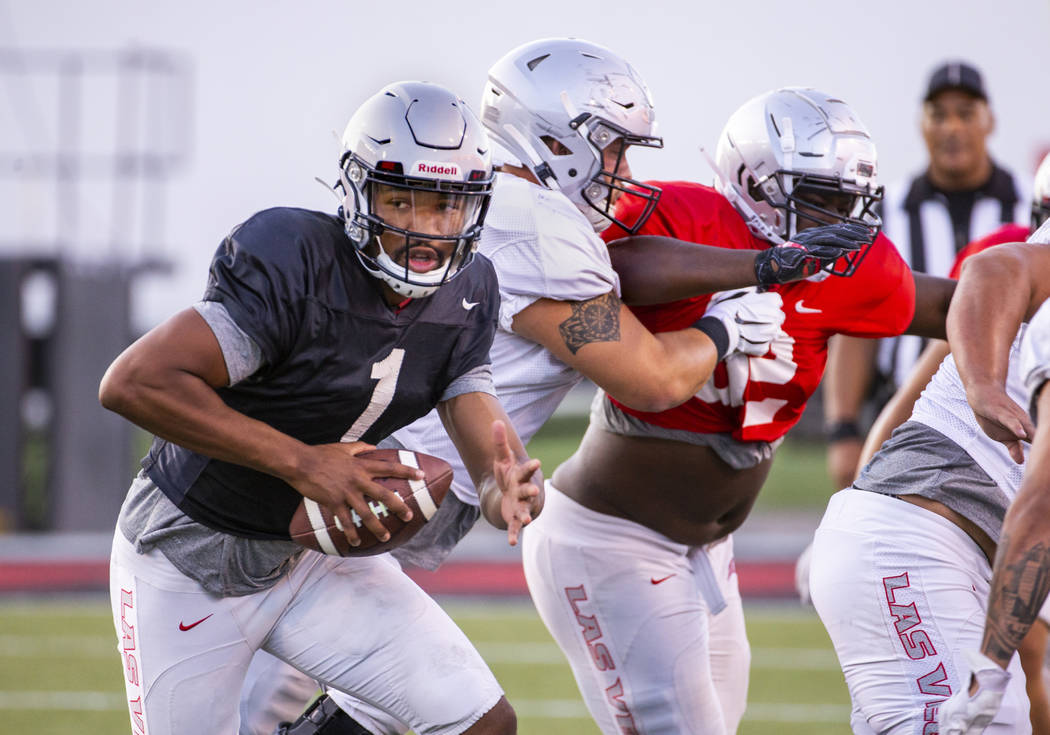 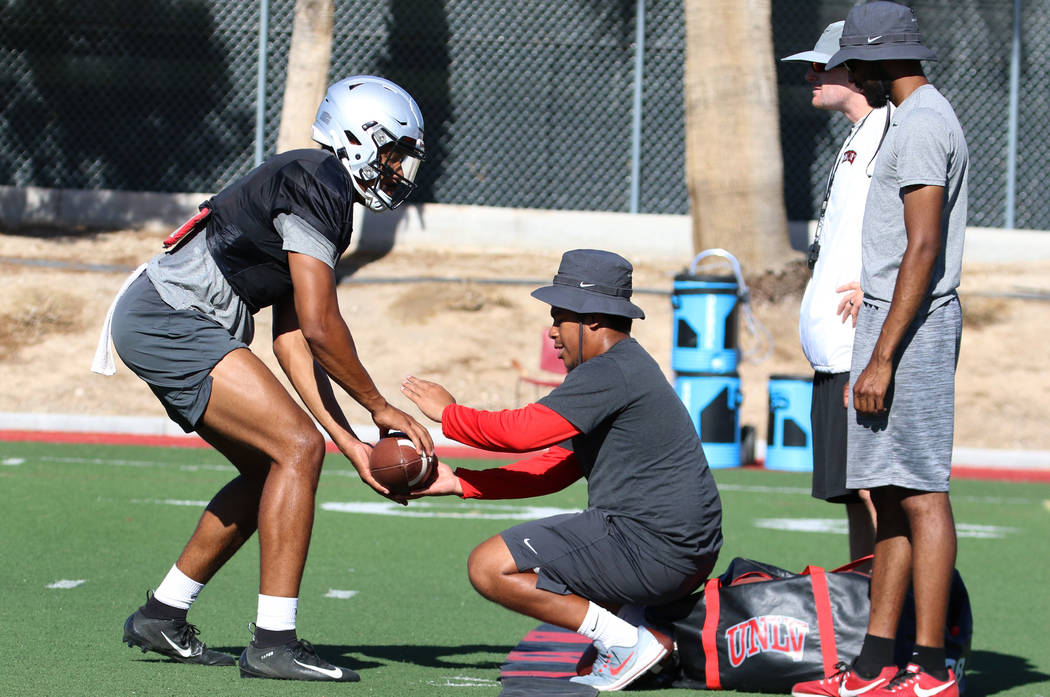 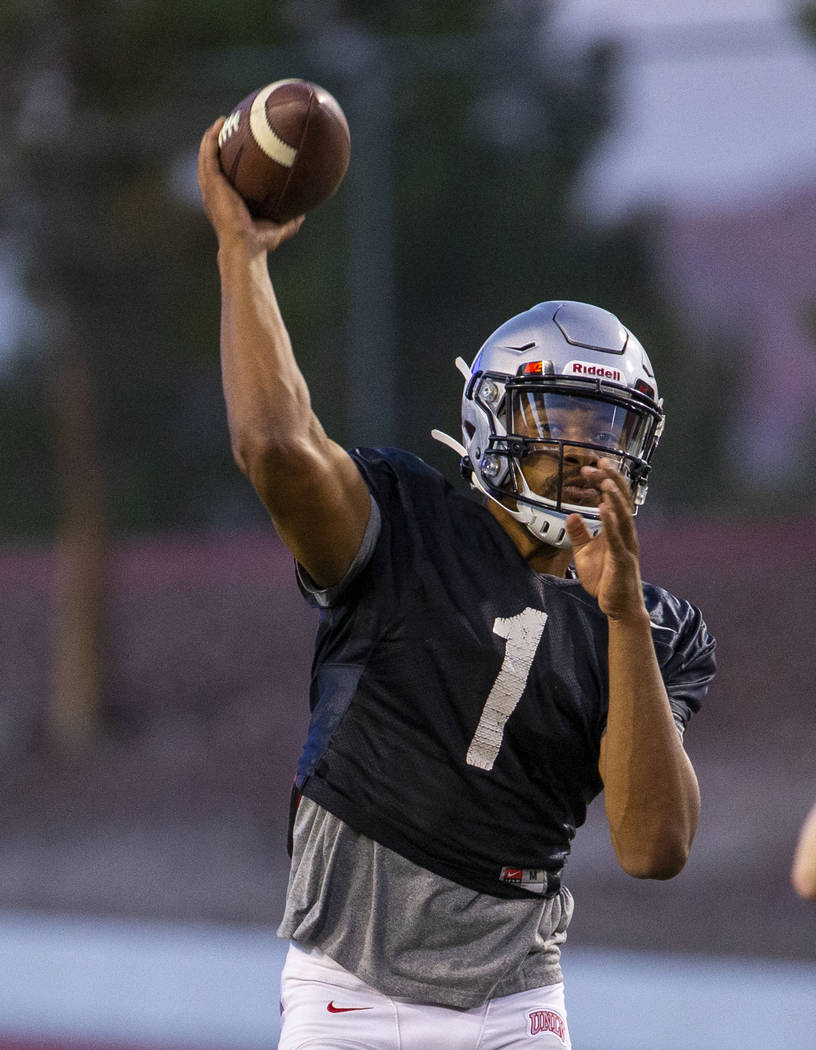 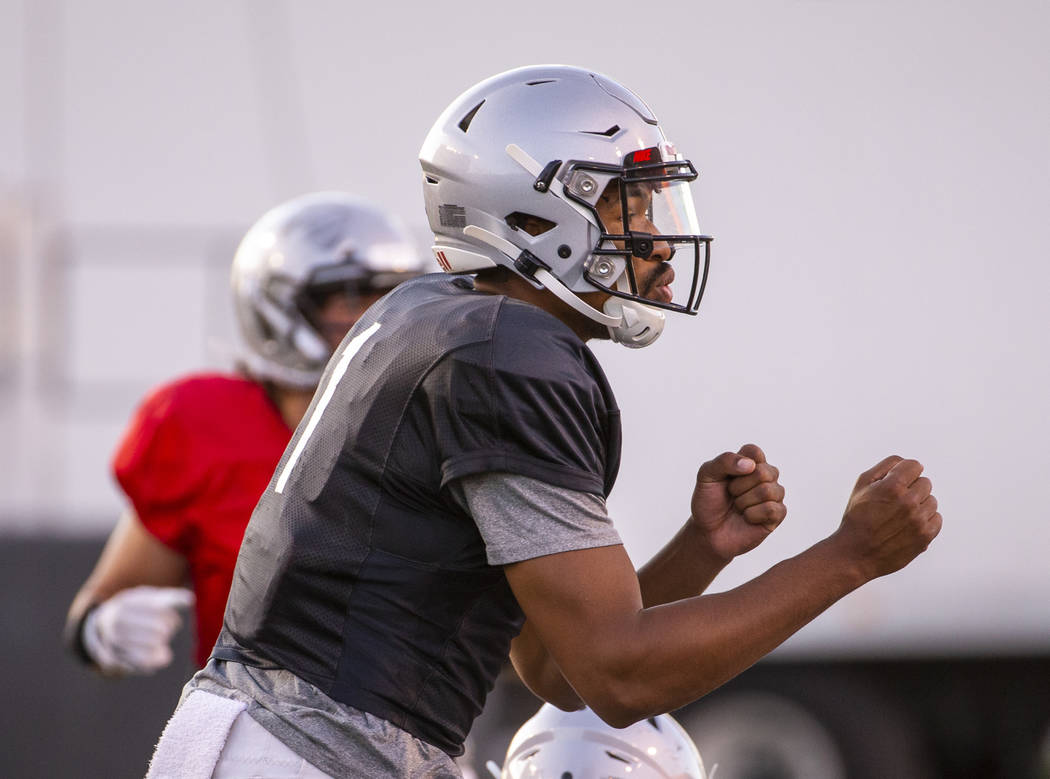 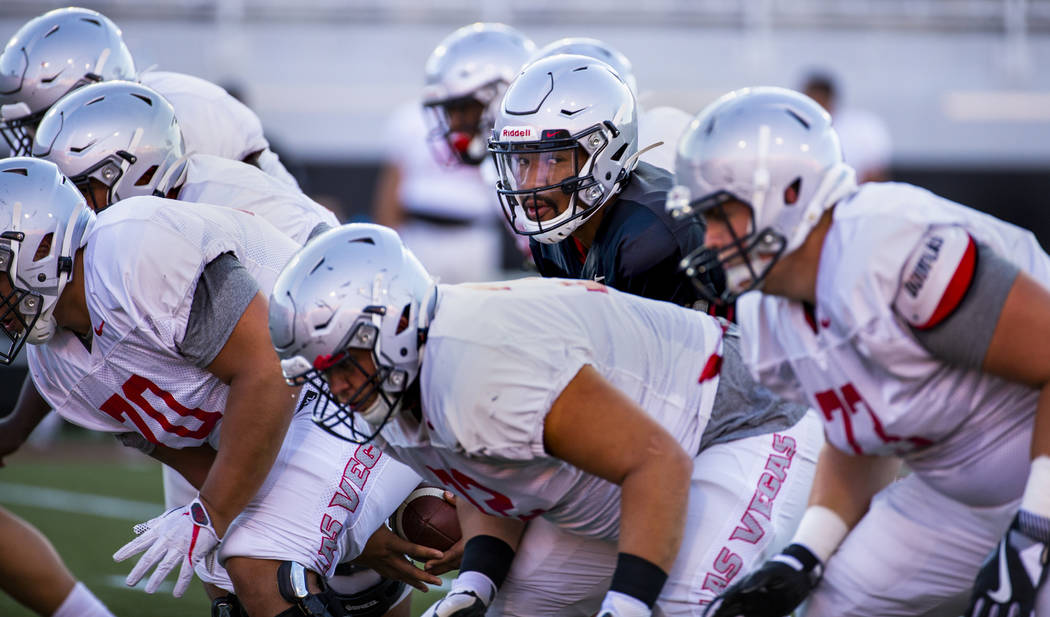 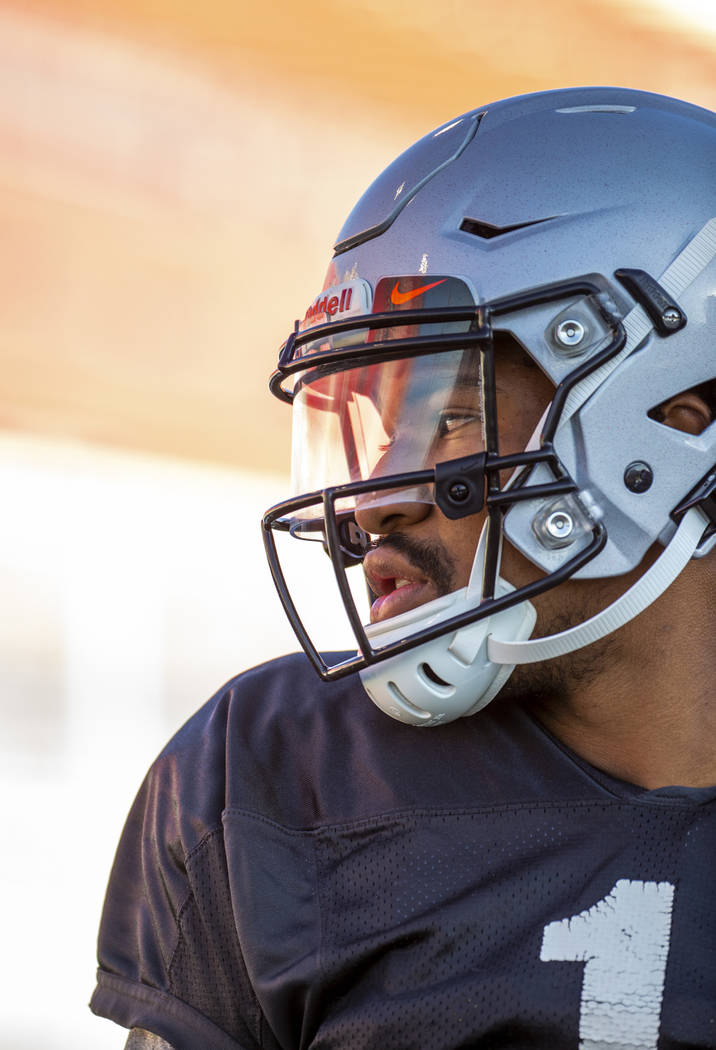 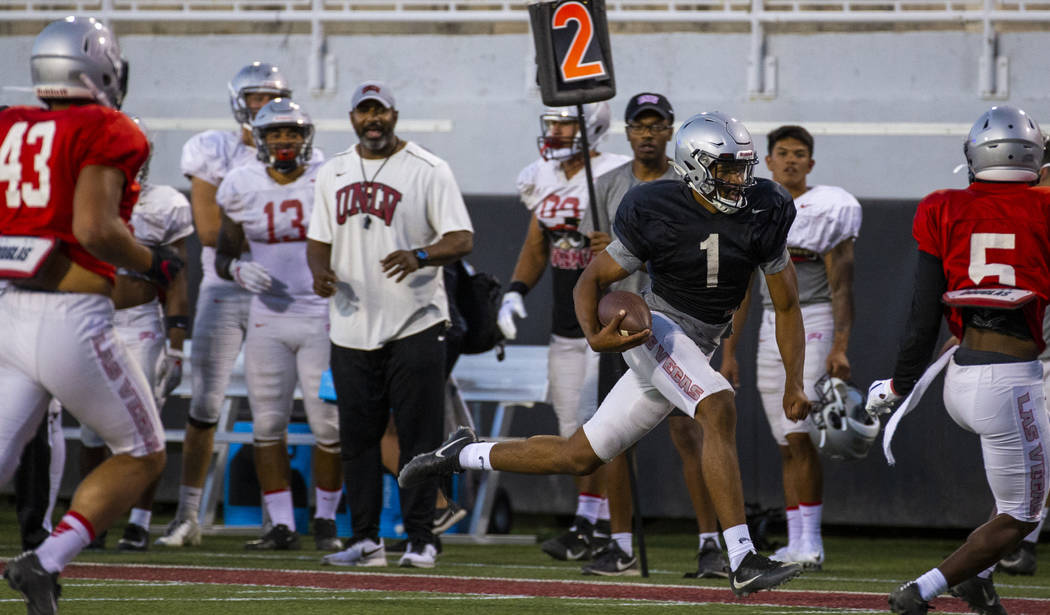 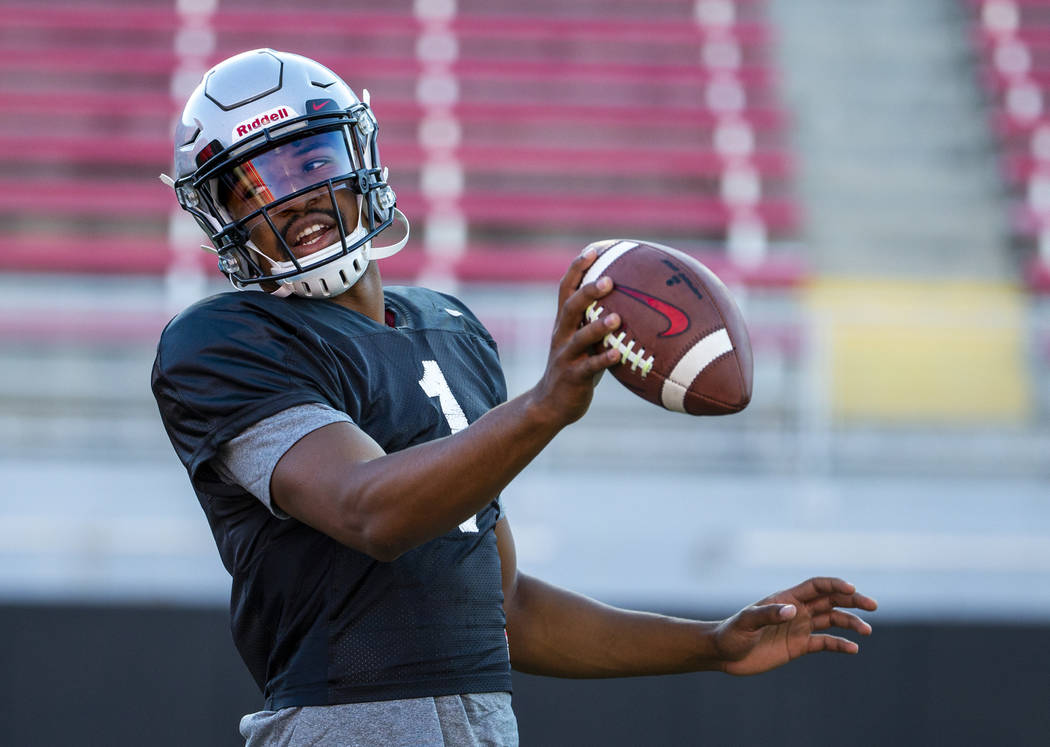 UNLV QB Armani Rogers (1) looks to make a a toss to his running back during their first major scrimmage of football training camp at Sam Boyd Stadium on Saturday, Aug. 10, 2019 in Las Vegas. (L.E. Baskow/Las Vegas Review-Journal) @Left_Eye_Images 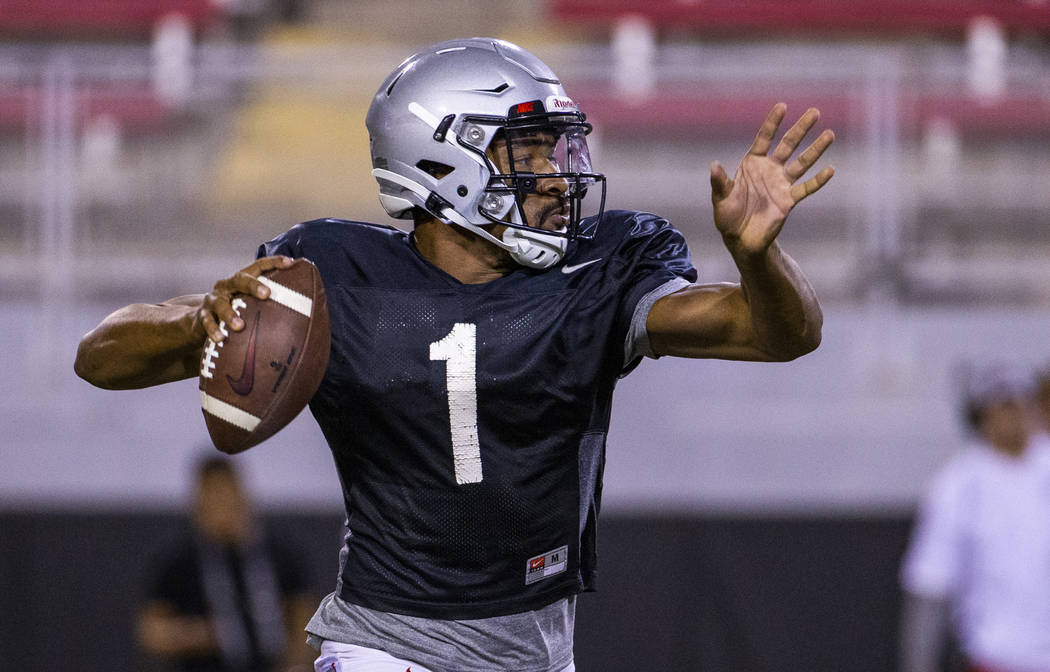 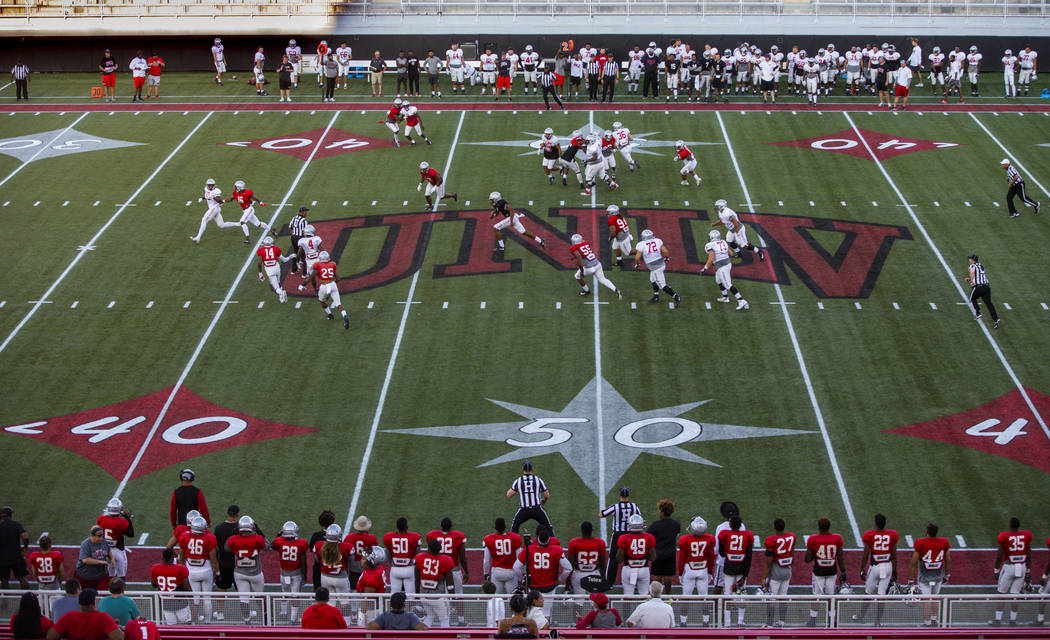 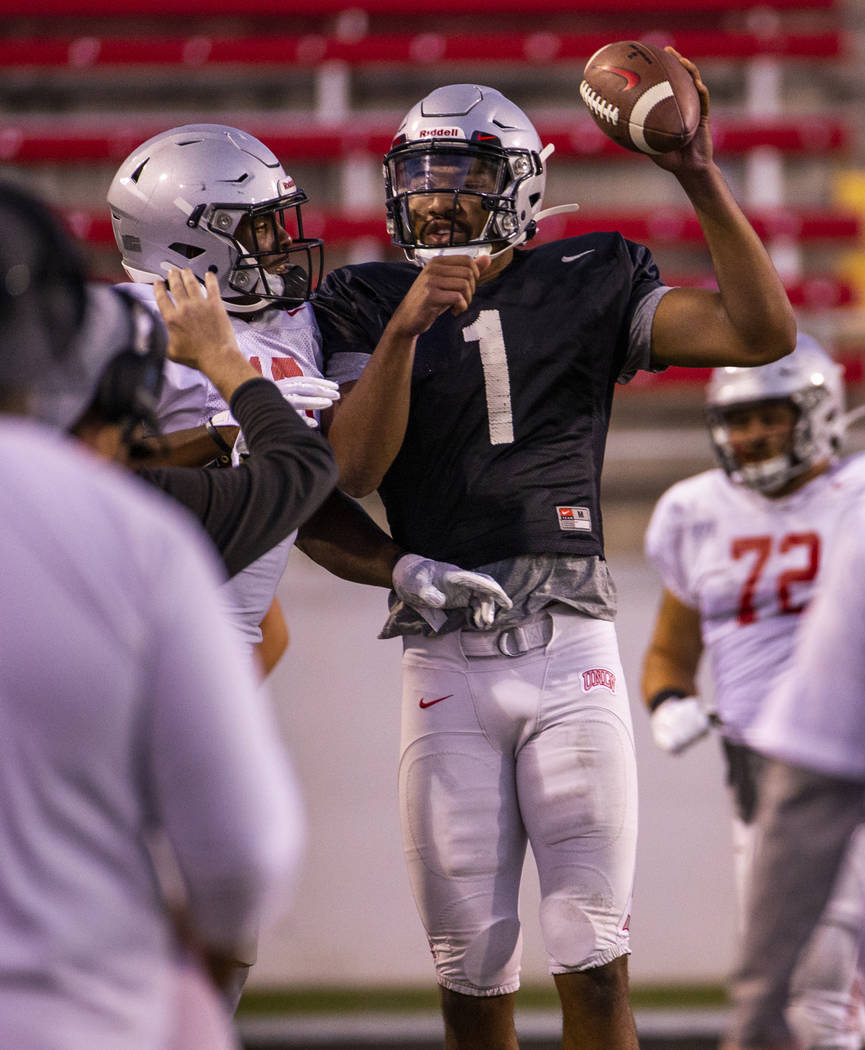 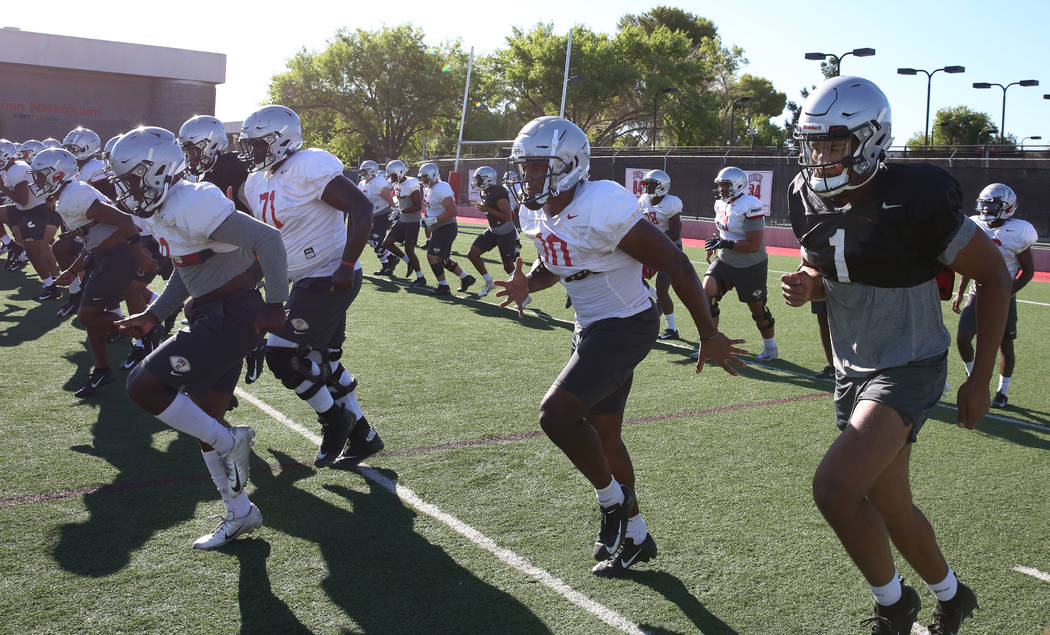 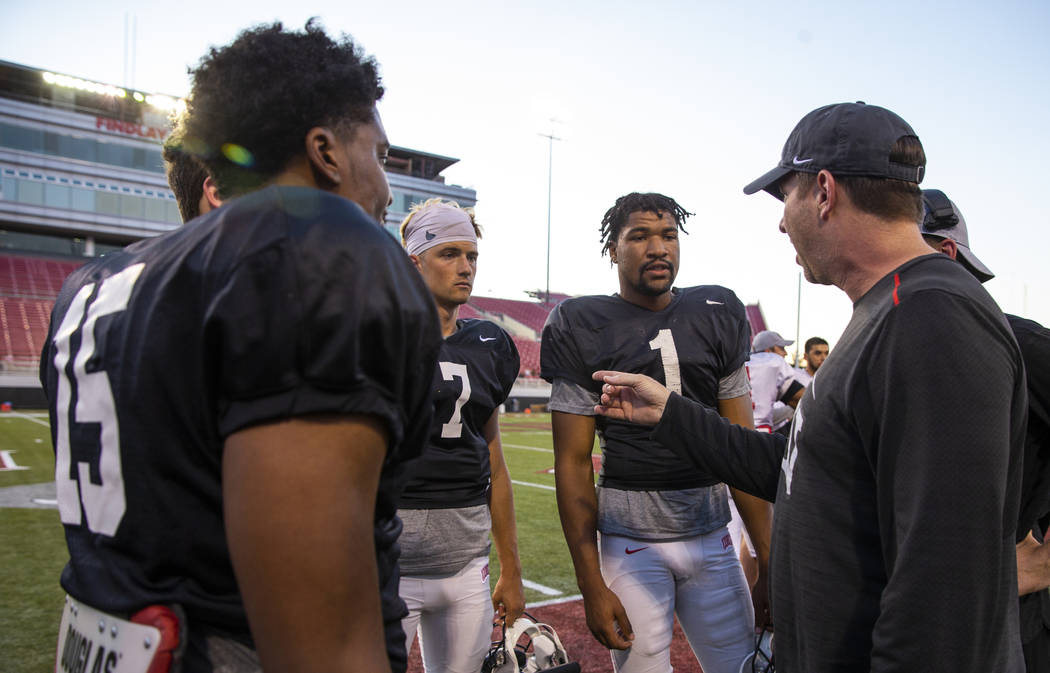 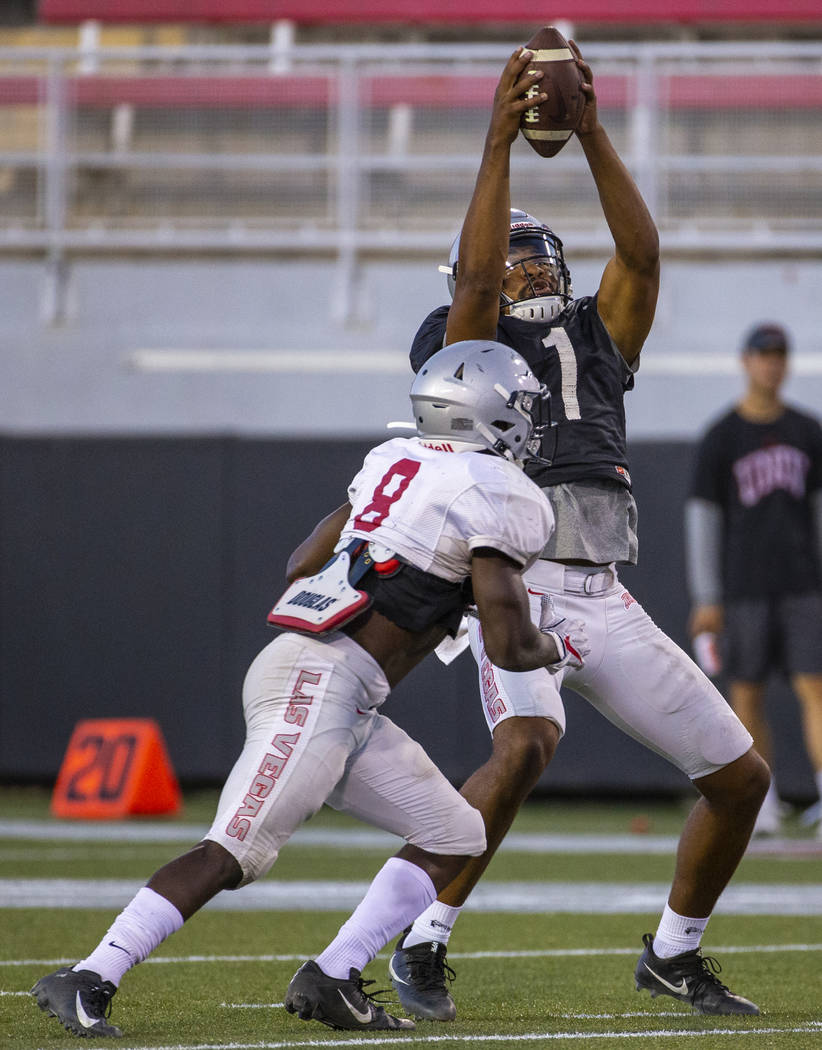 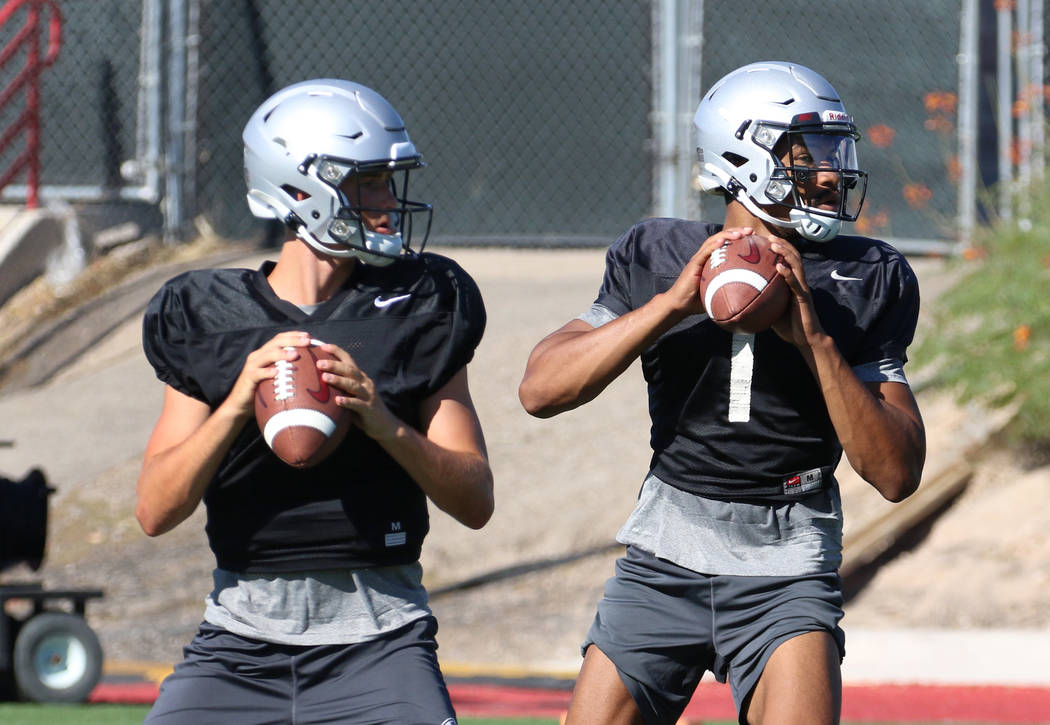 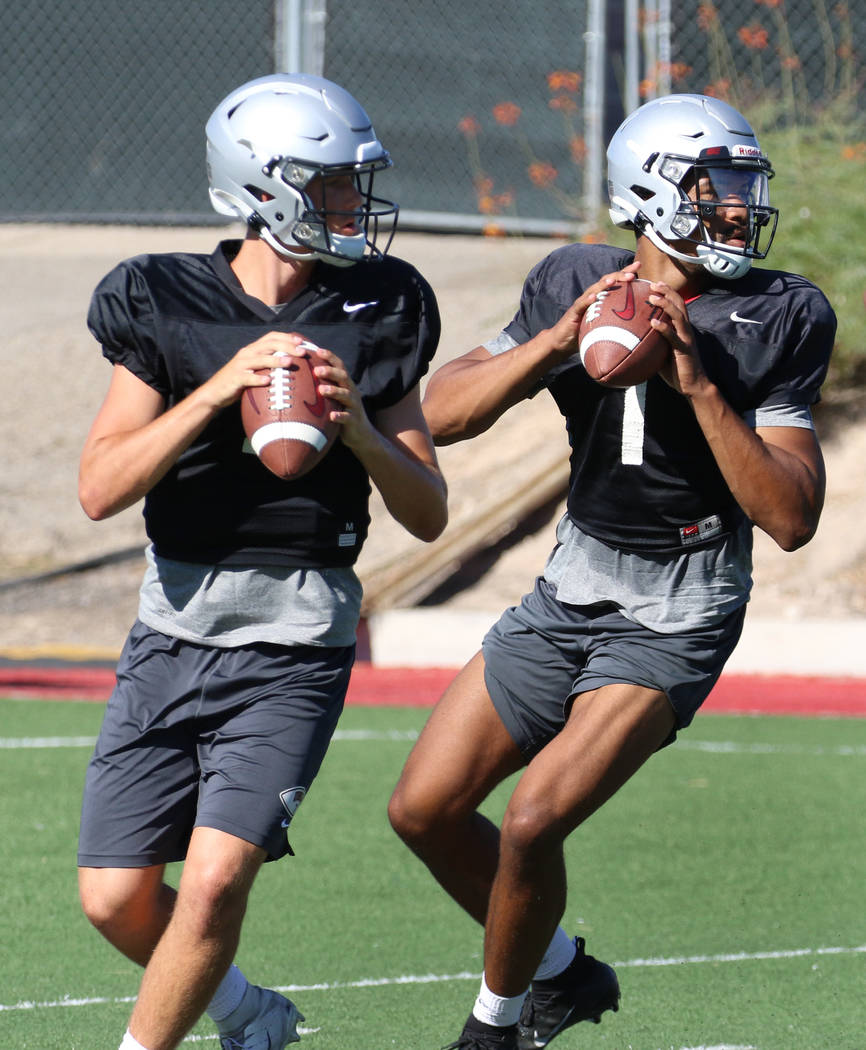 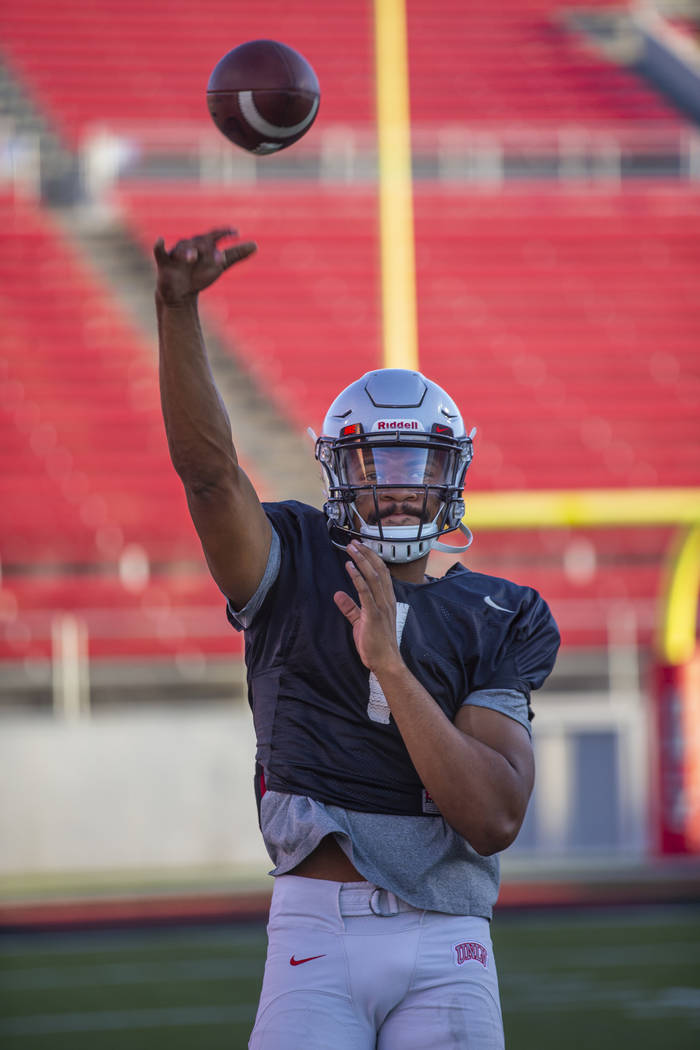 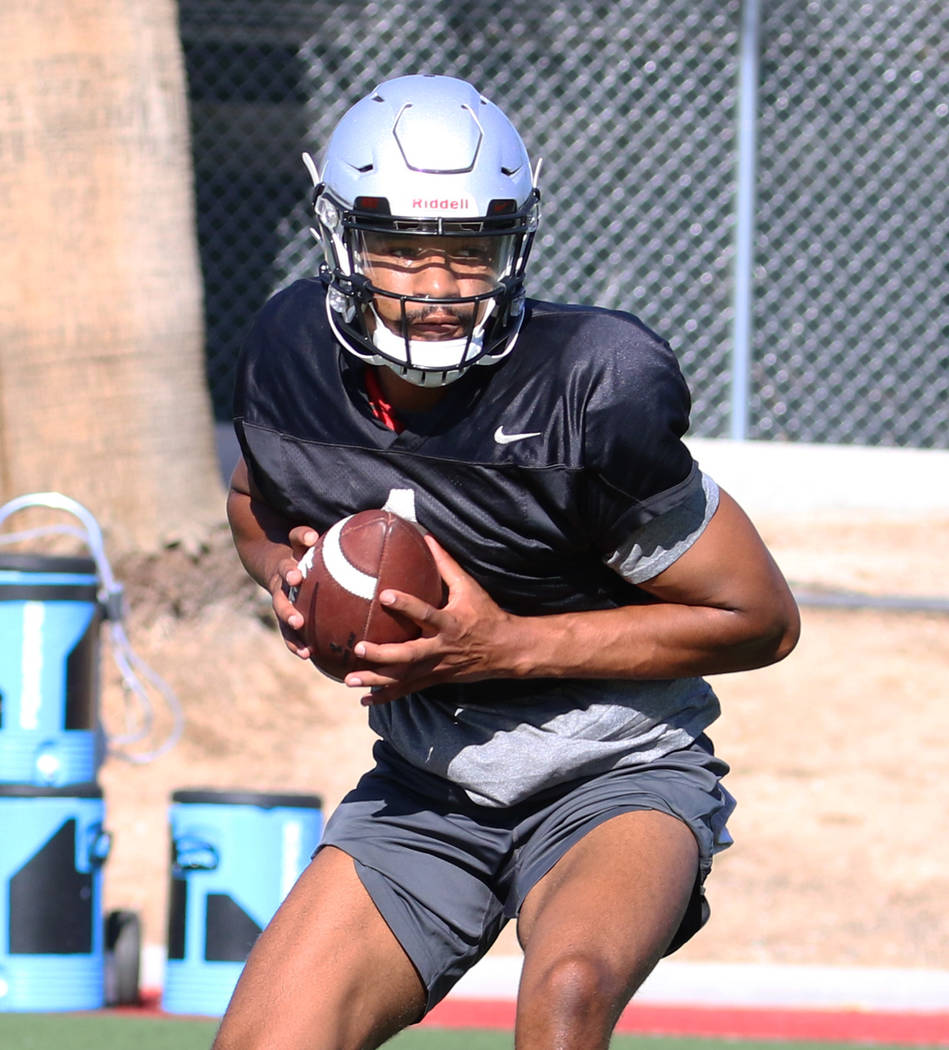 If executed well, the spin rate on a football in air should be 400-600 revolutions per minute, a motion that creates a gyroscopic torque, which means the axis of a spinning object is tilted.

This creates a third axis that is perpendicular to the actual spin.

Translation: That which goes up from the arm of Armani Rogers needs to come down in the hands of more receivers.

The science of it all must finally equal results for UNLV’s quarterback.

You don’t need a physics degree to understand what creates a perfect spiral, but numbers rarely lie and those of the redshirt junior Rogers suggest bowl eligibility for the Rebels in 2019 will be directly linked to whether or not he has grown into a more accurate passer.

UNLV opens its fifth year under head coach Tony Sanchez on Saturday night against Southern Utah at Sam Boyd Stadium, and Rogers for a third time will direct the offense to begin a season.

Injuries have limited him to 16 college games.

That part needs to change, too.

He is the best running quarterback in school history, trailing the 1,528 yards from Jason Thomas by just 183 for the career lead at the position, and yet Rogers has executed enough electric attempts to firmly establish him atop such a list.

But things in the passing game have been far less reliable, and last year’s 44.4 percent of completions over 117 attempts in six games was alarming in the sense that the same mechanical issues stated his first season at UNLV continued to restrict him.

“If I’m the media or fans, I get that you haven’t seen him play at a high level consistently,” Sanchez said. “There will be a few really good games and then a few not-so-good ones. But he also finished last season by beating UNR and completing 13-of-20 for 172 yards and three touchdowns.

“Can he be that guy all the time? If he can, this team is capable of winning a lot of football games this season.”

Bob Johnson has never worked with Rogers, but heard about the measurables (6-foot-5, 225 pounds) and big arm and athleticism at such a size to have produced over 1,300 rushing yards.

“I mean, all of that is what you want, right?” Johnson said.

One of the most successful high school coaches in history and co-founder of the Elite 11 quarterback camp in Southern California, Johnson tutored the likes of Drew Brees and Ben Roethlisberger and Carson Palmer.

His sons, Bret and Rob, both played quarterback professionally.

Bob Johnson has been there, evaluated that, broken down every weakness of every level of the position.

“There is a ceiling for some guys, of course, one they just can’t push past as (throwers),” Johnson said. “Some are who they are. It’s a very tough position to play well all the time. Even the great ones have bad days.

“But if a guy totally buys into what he is being taught and has enough size and strength, you will usually see steady improvement. (Rogers) is a starting Division I player who has had some very good games. So now it’s about his brain and body all coming together to continue getting better.”

It’s about, well, his lower half.

Stop us if you have have heard this (often) before: Rogers gets into trouble and passes go awry when his front leg locks up and his back one sticks in the ground and he becomes all upper body as a thrower.

He has spent summers working with private coaches on such flaws, and Sanchez agrees UNLV coaches can help even more via play-calling.

“If you’re throwing eight deep balls a game and not hitting many, that’s not helping your completion percentage,” Rogers said. “I can’t make things so complex. I just have to trust myself, that my mechanics will be sound. When a throw isn’t right, you know and feel it right away. I’ve worked really hard on it.

“I know that I’m the quarterback who beat (UNR) last year. I know it. I can be that guy all the time.”

Time to step up

Rogers has to own many of those long misses, play-calling or not.

It has been four years. Time to push through that ceiling.

Coaches say he has never looked better than this preseason, that Rogers completed 64 percent of his attempts and had four practice days over 75.

I’m not even sure what that means. He can’t be hit. It’s mostly a controlled environment.

He should have such a percentage.

But if such numbers aid his confidence, much like opening as a 24-point favorite against what many believe a ghastly Southern Utah side should, all the better for UNLV and Rogers as they approach 2019.

Because when it comes to potential bowl eligibility, his improvement as a passer could prove as important a factor as any.

“That’s the job,” Rogers said. “Carry the load. Pressure will always be part of it. Keep everyone and everything together.”

The football’s nose will continue to be pulled downward, even as wind keeps it in the air longer.

For the sake of UNLV, when it finally comes down, it needs to find a lot more hands this season.

After all, the laws of motion never mentioned anything about incompletions.