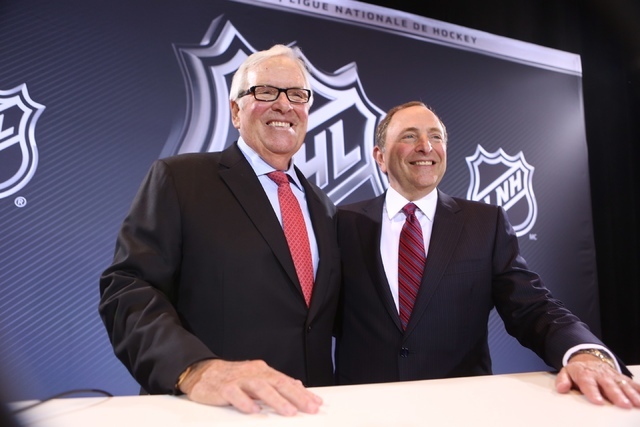 I surmised long ago nothing would surpass the Yuma High Criminals, because how in the world can you get better than a school that once used a territorial jail to hold its classes in cell blocks and assemblies in the prison hospital?

It is the country’s only high school whose mascot is copyrighted, and if Bill Foley thinks he’s going to top someone wearing a blue-and-white prison uniform while carrying a ball and chain to games, he’s really lost on this whole nickname/logo fiasco.

The Criminals stand alone at the zenith of imaginative team monikers.

Las Vegas has its NHL team that will begin play in October 2017, and perhaps by then we will know exactly what Foley’s outfit will be called and what sort of logo will appear on uniforms and merchandise and all other matters of identification.

The team’s owner is committed to holding a celebration to announce all details and begin selling the anticipated gear, perhaps in the next month or so.

I understand both sides of the Great Nickname Debate, particularly the one that says how a team is referred to doesn’t mean squat when compared to its level of success or failure.

If the Las Vegas team meets Foley’s goal of being a playoff side in three years and a Stanley Cup contender within eight, nicknames and logos will prove as significant as what parking space you might nab for games at T-Mobile Arena. Winning beats everything in the big picture.

But if the Las Vegas team makes losing a habit beyond its first few seasons, fans won’t care as much about nicknames as they will hiring the Yuma High mascot to swing that ball and chain at the heads of those front-office folks making personnel and coaching decisions.

We know Foley’s team will be called the Knights, which will be preceded by Desert, Golden or Silver. This is the other side of things. The long and painstakingly slow process to arrive at a conclusion.

Given all the coverage Foley has received on the matter, I was sure the happenings would be included in those intelligence briefings given to Trump and Clinton. It even reached the bizarre and childish point of Foley actually registering fake names as a misdirection ploy.

Memo to the owner: Don’t do that. It’s amateur hour. Don’t begin a relationship with those purchasing your season tickets and excited about spending even more money to wear your colors by misleading them, especially over such an innocuous matter. There’s no reason for it. It’s buffoonery.

The fact Foley spent even a second trying to fool others confirms this is the financial whiz’s first rodeo when it comes to running a professional sports team, not to mention how much blame should be assigned the NHL for the delay in announcing the nickname and logo.

Gary Bettman has absolutely played a major part in the holdup. The commissioner reportedly told Foley for months he couldn’t move forward with nickname and logo ideas because he didn’t officially have a team. This, even after the league’s general managers in March outlined rules for an expansion draft.

What about the following four months? Why wasn’t adidas at least allowed to begin creating potential logos and color schemes based on nicknames Foley could have had vetted long before the team was announced in late June?

The league knew it was happening.

Why all the cloak and dagger nonsense?

I’m not holding any celebration party over Knights as a nickname, but I would think (hope, pray) Silver and Desert both lead Golden by a wide margin. I was always partial to the nickname Scorpions, but then Foley said it wasn’t acceptable because he didn’t want the team named after a defensive animal. Another example of the guy overthinking the room by a mile.

I’m not sure what’s really in a nickname, given an NBA team from New Orleans is known as the Pelicans and another that began in the same city but then moved to Utah never stopped calling itself the Jazz. There is a college with the nickname Banana Slugs, but they’re from Santa Cruz, California, so they get a pass based on judgment potentially being impaired.

I’m certain Foley will make back the money lost in merchandise from the delay in announcing the nickname and logo, because this is still the town’s first major professional sports franchise and people are still going to want a T-shirt or hat or sweater commemorating it.

My son attends college back east, and his only references to hockey were those Wrangler games we attended, but he hasn’t stopped texting about me (of course) purchasing him a sweater of the Las Vegas team.

The stuff will sell.

Decades ago, before social media dominated our every thought and action, this wouldn’t have been near as big a deal. There wouldn’t have been as many stories and blogs and tweets written on a nickname and logo. It would have just happened when it happened.

But this is the world we live in now. This is considered major stuff.

Too bad the nickname Criminals was taken.

It would have at least added some historical perspective to the Las Vegas team.