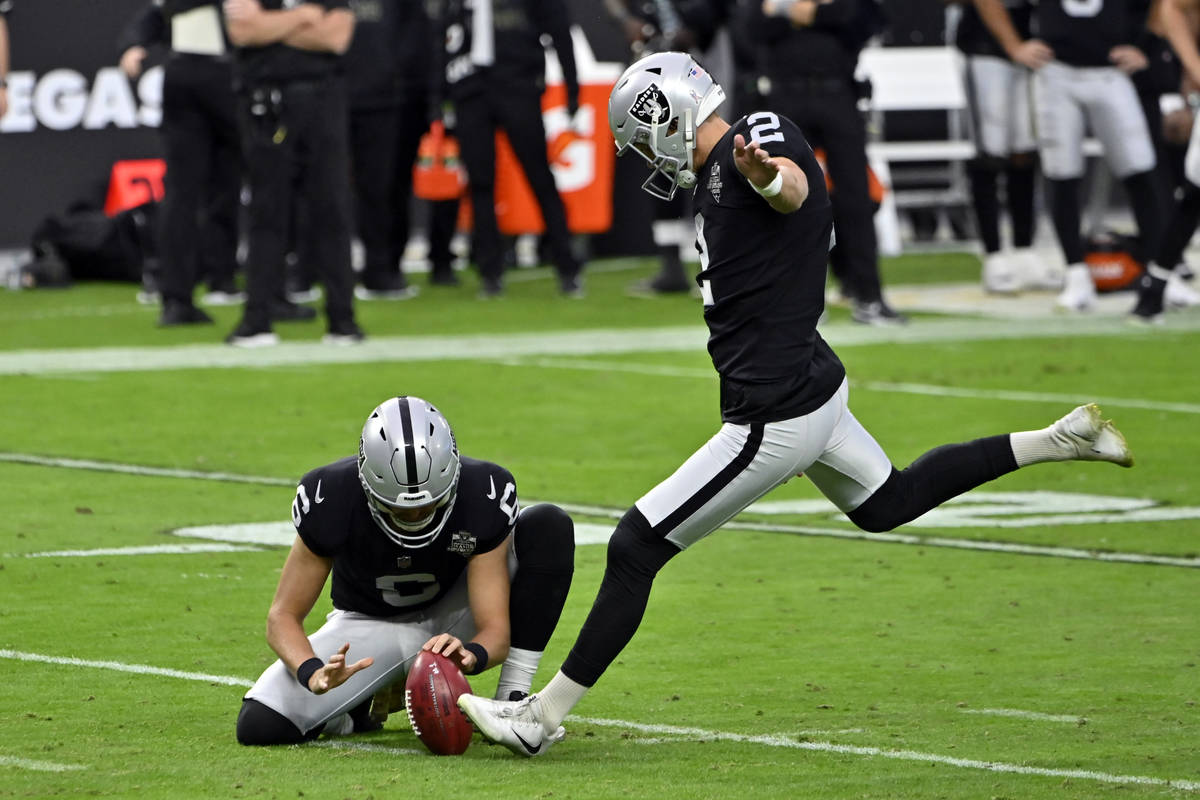 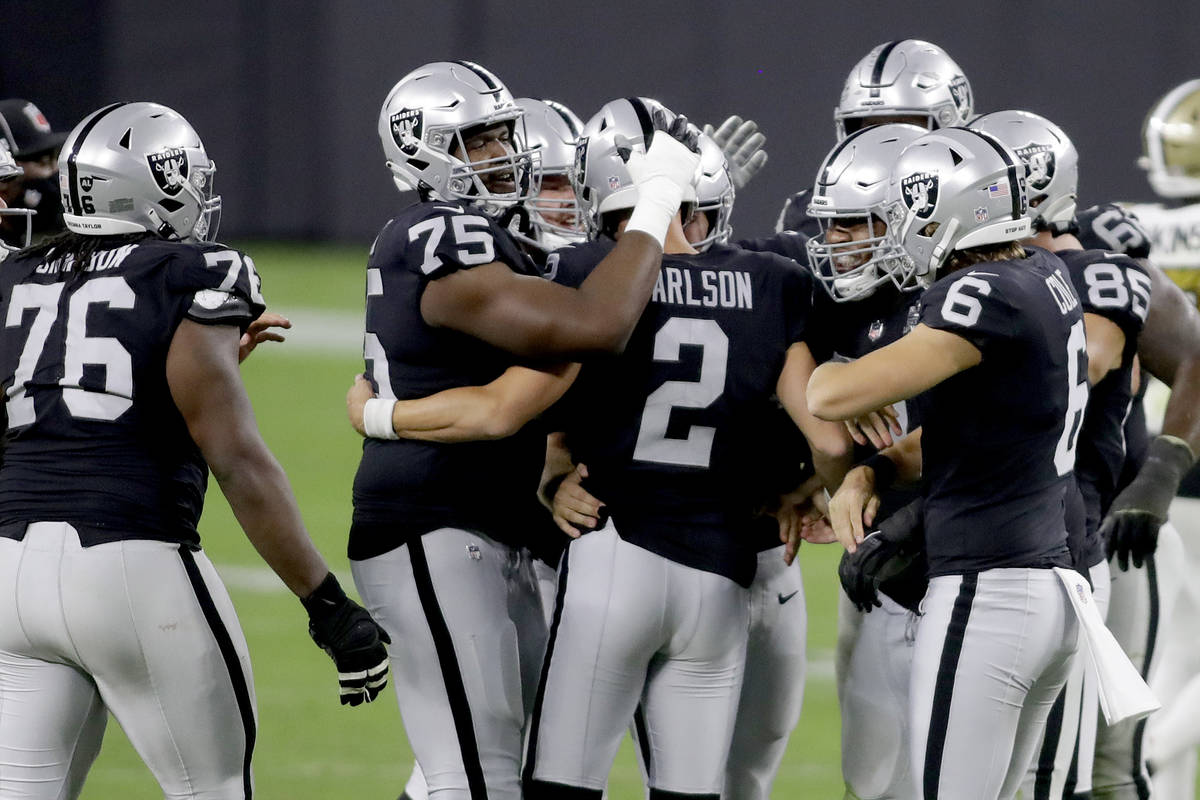 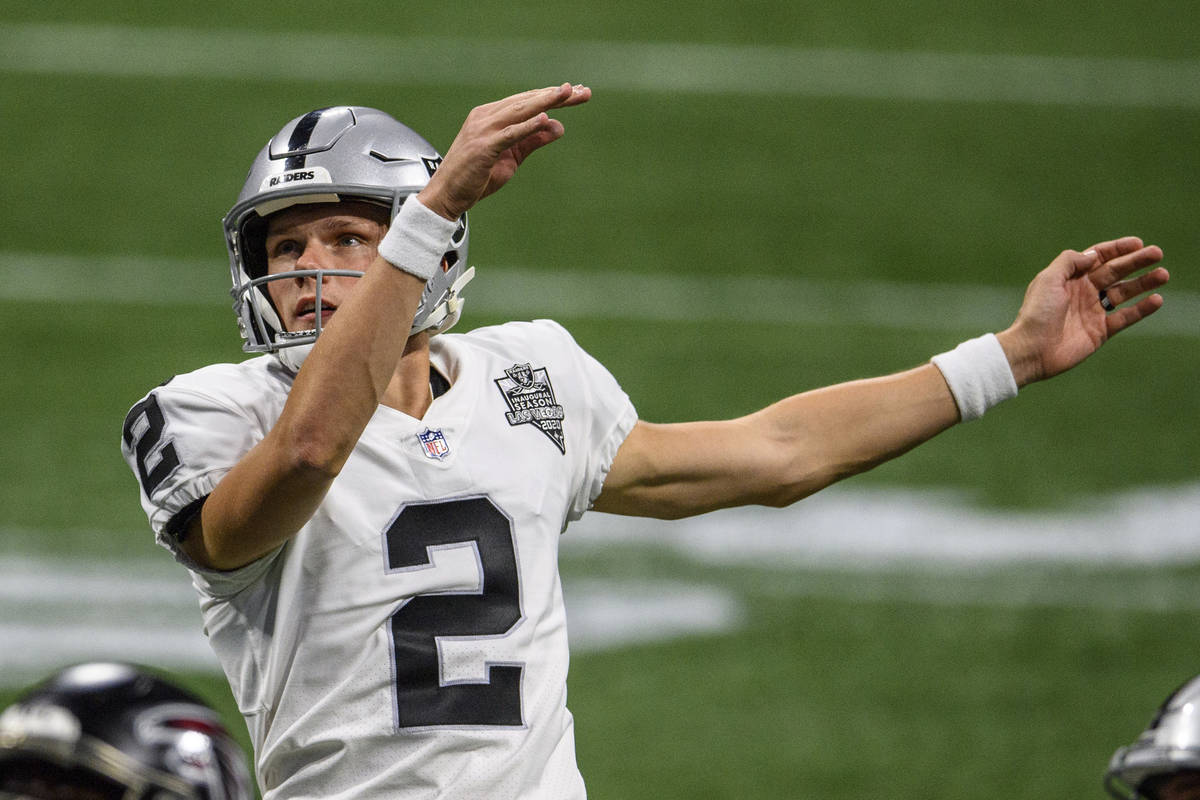 The journal is for writing goals and what sort of mindset is needed to attack the next practice, the next game, the next attempt. Daniel Carlson shared the idea of chronicling such information with his younger brother.

Kickers. They really are family.

Carlson is one of the NFL’s finest this season, a consistent source of calming relief for Raiders coach Jon Gruden. However often you agree with Gruden going on fourth down or trotting out Carlson and the field-goal unit, the latter almost always holds up his end.

“A lot of people might not think of the kicker as an important role, but for us, it’s life, right?” said Anders Carlson, Daniel’s younger brother and a junior kicker at Auburn. “Daniel has always been a confident guy. He’s not cocky at all, but he knows he can do the job and that helps him a lot.”

He also knows what might have to be done. At some point, qualifying for the playoffs or even advancing within them could depend on Daniel Carlson.

It’s not the sort of moment he’s used to, but heavy is the burden whose right leg is suddenly the most important.

The 7-5 Raiders host Indianapolis on Sunday, the first of four final regular-season games as Gruden’s team hunts an AFC playoff spot. And while that certain situation — a game-winning field-goal attempt with little time remaining — hasn’t yet arisen for Carlson this season, it very well could with postseason implications on the line.

It was November of 2018 when Carlson made good from 35 yards out as the game ended to give the Raiders a 23-21 victory at Arizona. That’s it. That’s the one. Not in high school at The Classical Academy in Colorado Springs or when he was establishing himself one of the best kickers in Southeastern Conference history while at Auburn had he known such a moment.

“In one way, I’d love just to kick extra points all day and have us blow people out,” said Carlson, in the second of a two-year, $1.32 million contract. “But, selfishly, sometimes mentally as a kicker you want that spotlight and those kicks in crunch time. You have to embrace it and enjoy it and look forward to it. Those nerves and excitement make all the hard work worth it. To be there in that moment.

“I hope to have quite a few game-winners for the Raiders in the years to come.”

Kickers know challenging times as much as any player. Make it. Miss it. Hero. Goat. There is no in between. No middle ground of emotion.

Carlson was handed a heavy dose of adversity after being the highest kicker selected in the 2018 draft, a fifth-round selection of the Vikings. In just his second game, he missed a field goal in regulation and two in overtime of a 29–29 tie with the Packers. The following day, he was cut.

This, a kicker who is the SEC’s all-time leading scorer and holds nearly all of Auburn’s kicking records. Who ranks second in NCAA history with 92 made field goals. Who had never known much failure.

“It was humbling,” he said.

But new opportunity soon knocked and Carlson signed with the Raiders in late October of that season, grabbing the job by making 16 of 17 field goals and, most importantly, Gruden’s trust.

“He’s in a great spot with the Raiders,” Anders Carlson said. “It really fits him. For his personal journey and his faith, I think (the Minnesota experience) was huge. As a little brother, I’m very proud of all the he’s done and very thankful the Raiders picked him up.

“For sure, (game-winning chances) separate great kickers. You have to challenge yourself to think of them the right way. You want that kick. The minute you shy away from it is when things go bad. That kind of kick late in a season during a playoff run … I know he’d love such a chance.”

Everything seems on point for one.

Carlson is the kicker. AJ Cole is the holder. Trent Sieg is the long snapper.

It’s a field-goal unit that has been more than solid this season, no matter the distance.

If he kicks in the league for 20 years, Carlson said, he will still embrace the part about keeping a journal. Still make weekly notes about technique and mental approach. Still continue to learn. Still hope for moments in the spotlight.

“I really like him a lot,” Gruden said. “He’s a rare talent. He’s got a great demeanor about him. Never too high, never too low. He has run into some tough times like all kickers do. But I’ve seen great golfers three-putt greens. Nobody is perfect. But he has never lost his confidence. This kid is money, a guy I have a lot of confidence in.”

Could be, he will soon trot Carlson out there with a playoff berth on the line.

Or perhaps something bigger.

Heavy is the burden.