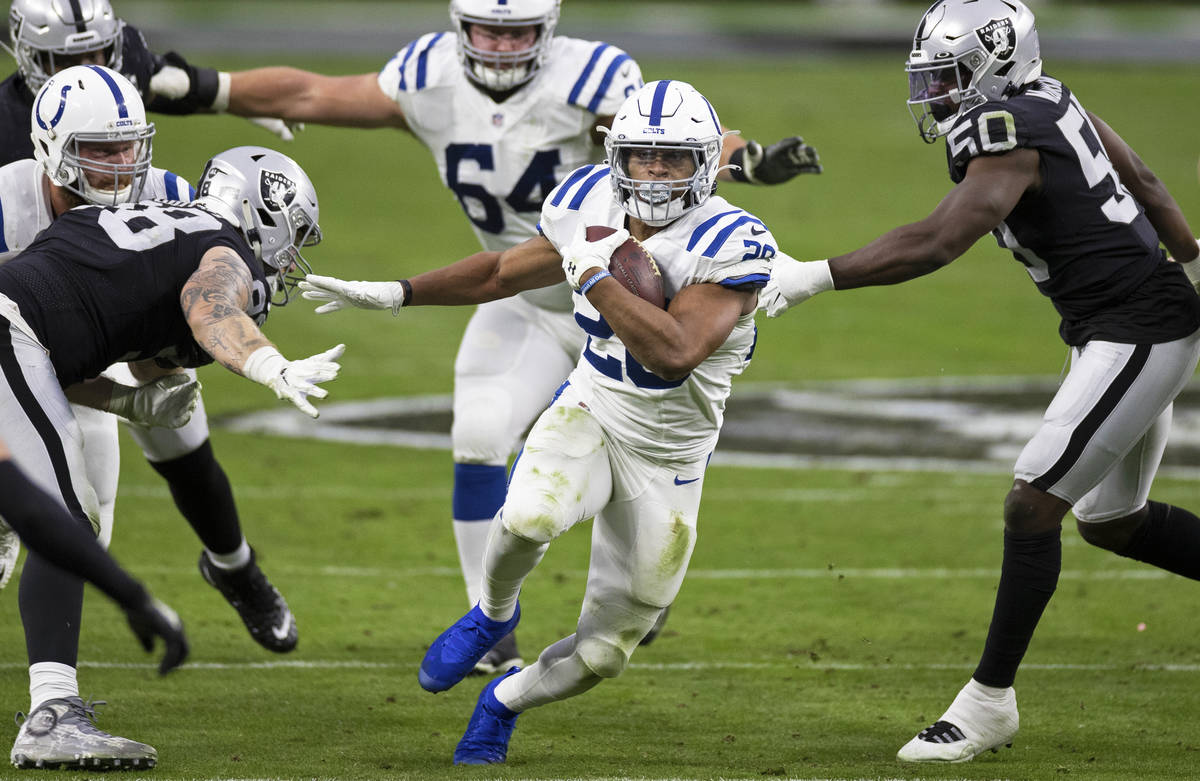 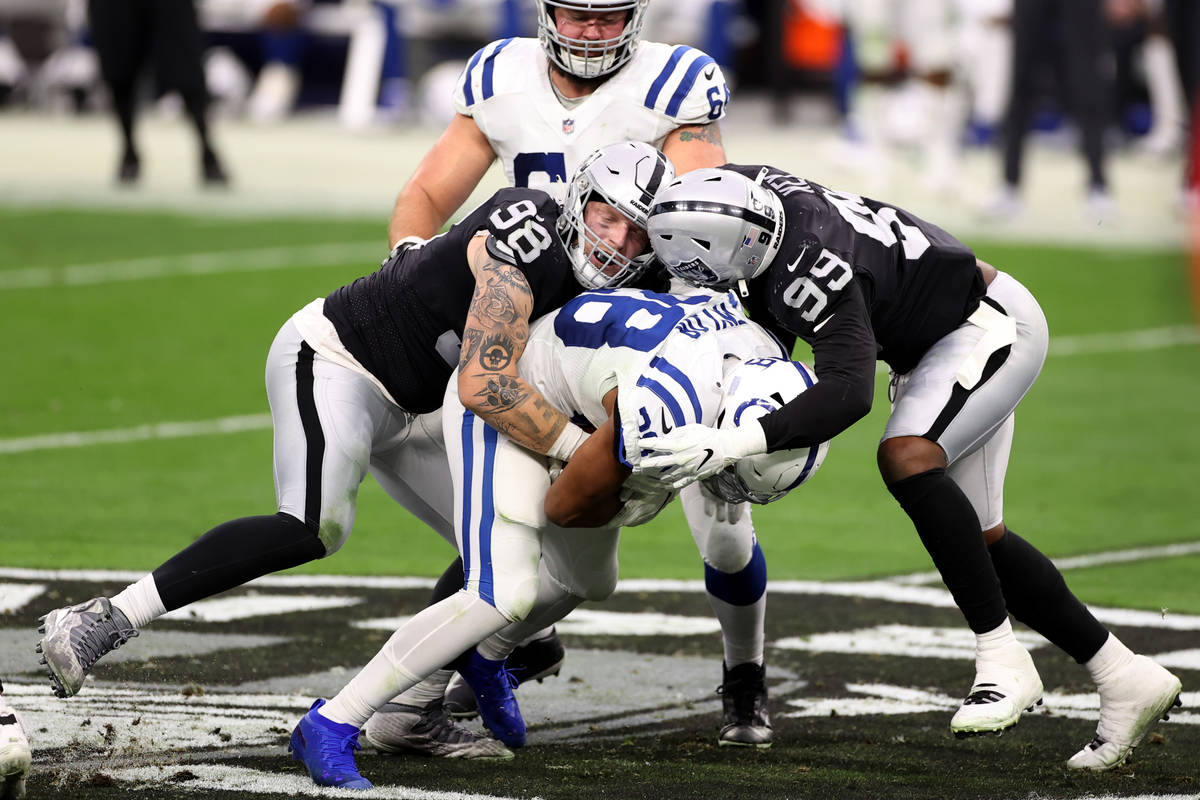 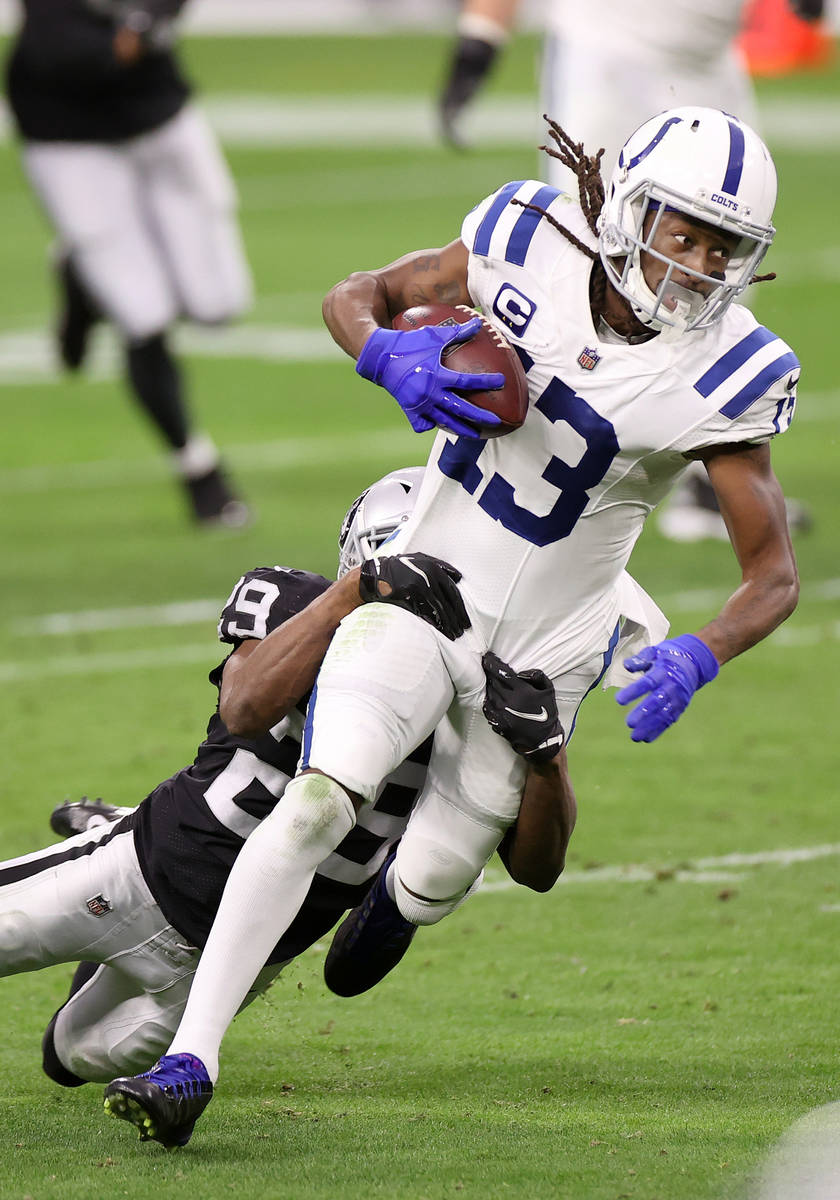 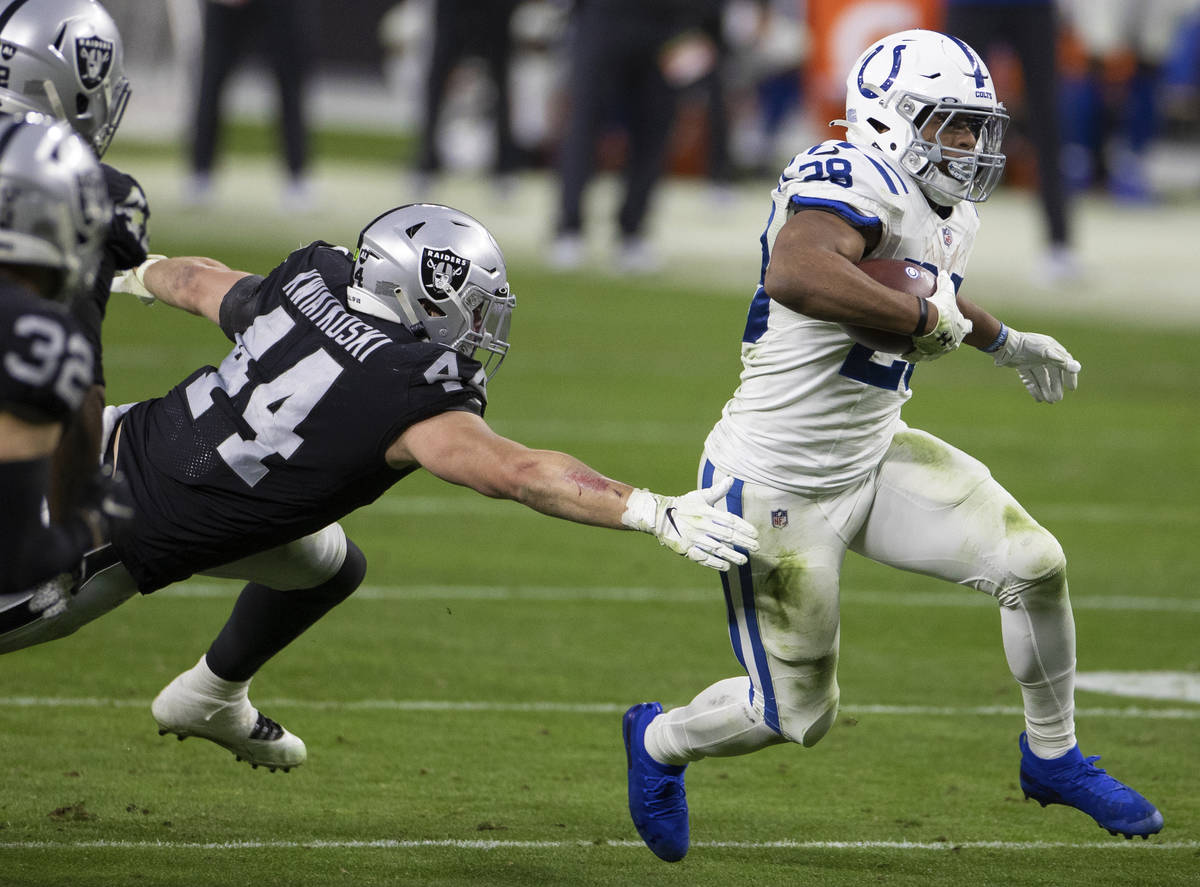 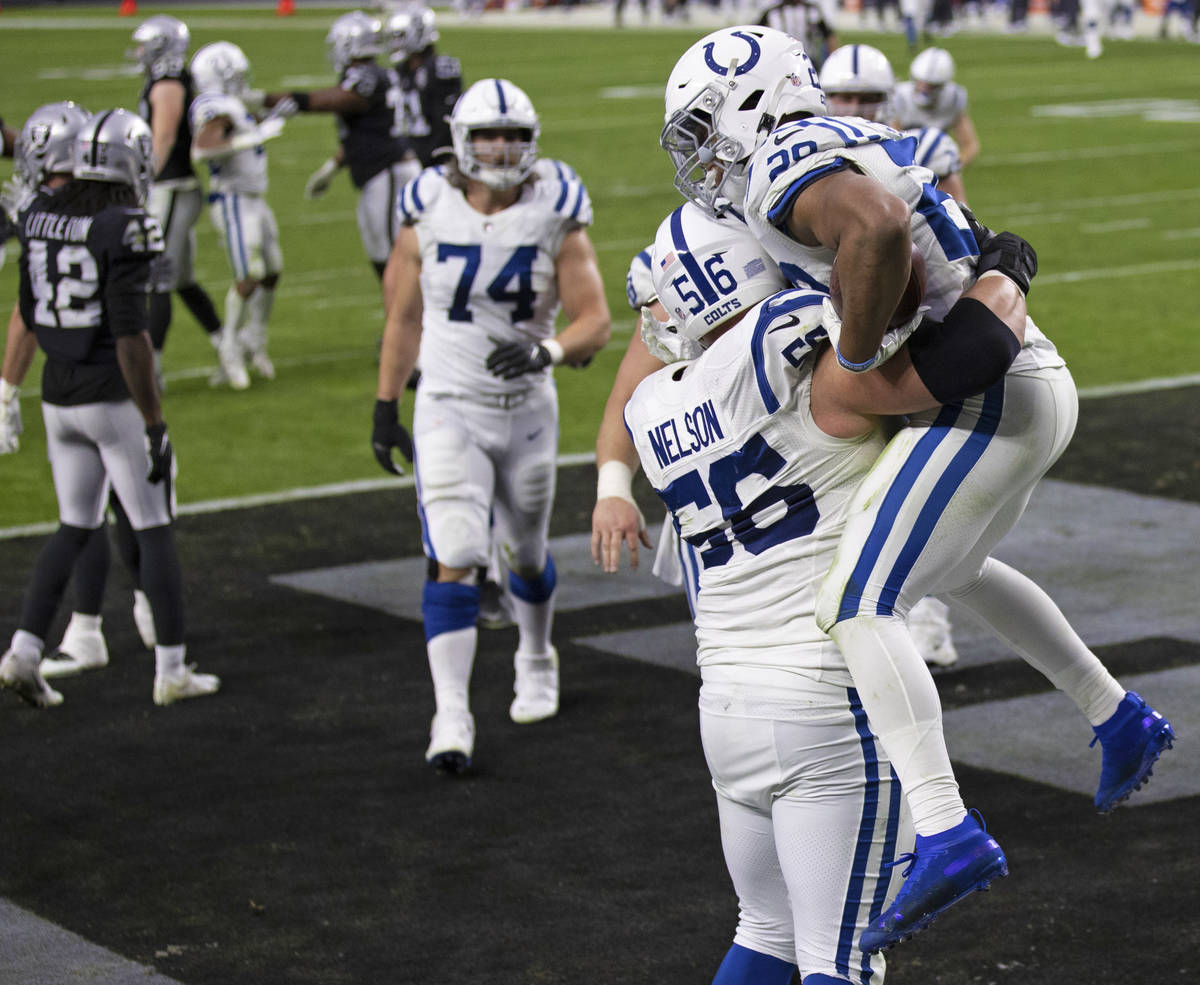 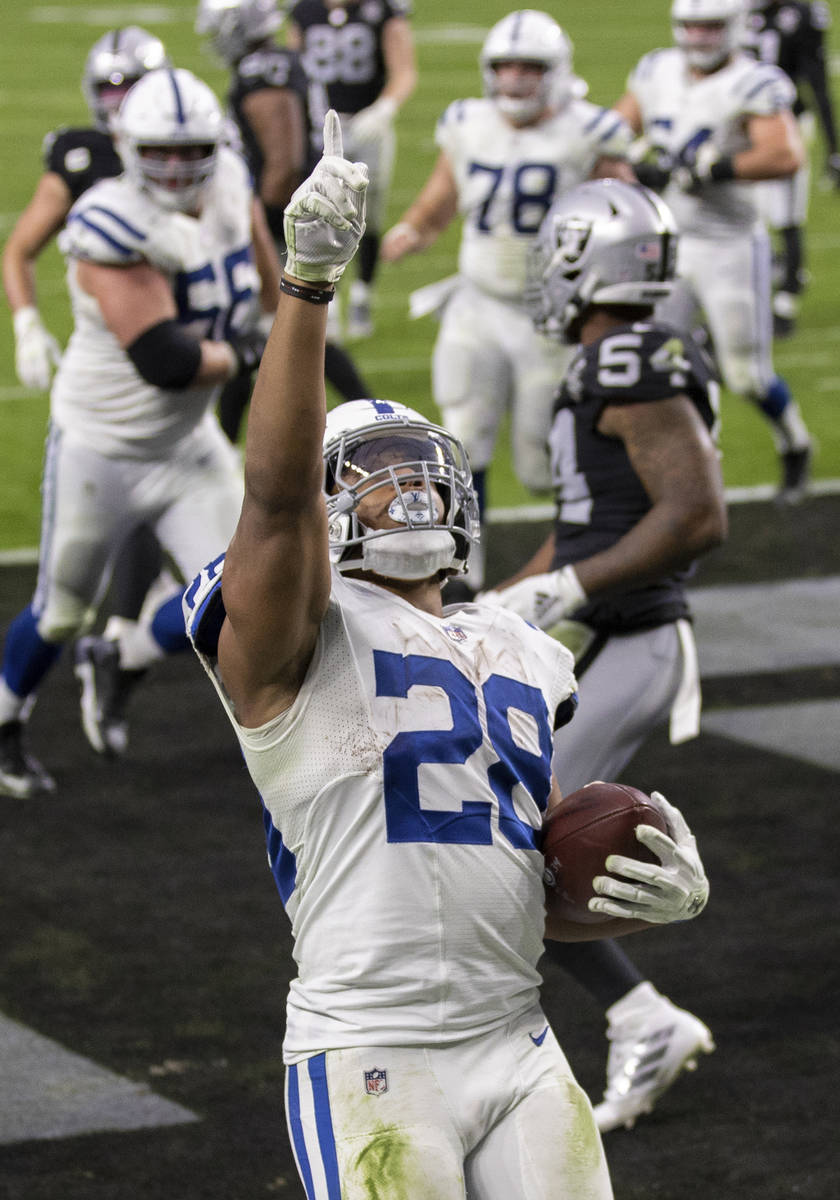 Indianapolis Colts running back Jonathan Taylor (28) celebrates after rushing for a fourth quarter touchdown during an NFL football game against the Raiders on Sunday, Dec. 13, 2020, at Allegiant Stadium, in Las Vegas. (Benjamin Hager/Las Vegas Review-Journal) @benjaminhphoto

The NFL is set up to make teams like the Raiders believe they’re good enough. That no matter how stark the truth is about their defensive ineptness, there is always hope for middling .500 teams to make a late-season run to the playoffs.

But trying to conceal how bad the Raiders are defensively gets tougher and tougher each week.

Indianapolis exposed several warts in a 44-27 win at Allegiant Stadium, the Colts on putting some serious distance between themselves and the Raiders if and when any playoff tiebreaker scenarios would arise.

Shortly after, Guenther was relieved of his duties.

It apparently doesn’t take much to run for 200-plus on the Raiders right now. The Jets did last week and now the Colts, who rushed for 212 total and over 6 per carry.

The Raiders were awful on third down, allowing the Colts to convert on 8-of-11 chances. Gains that included 19, 17 and 27 yards.

“We have to make some real improvements,” Raiders coach Jon Gruden said. “We have a short week. We have to get ready for the Chargers (on Thursday night). We can’t worry about the playoffs and who’s winning and losing around the league.

“I don’t want to hear any other playoff questions. We have to take care of our business and find a way to win our eighth football game.”

I suppose those stricter COVID-19 weekly protocols also meant the closure of defensive laboratories. That’s where Gruden said he and his staff spent a good amount of time following a 45-20 home loss to Tampa Bay in October.

The Raiders’ defense has moments, glimpses, hints that things might get better. A stop here. A forced turnover there. A second half in Kansas City. Just not near enough.

It was after that loss to Tampa Bay when a report circulated across social media that Gruden was about to fire Guenther. He didn’t then, but the fact it occurred now shouldn’t surprise. Based strictly on numbers, few could argue.

Just as long as Gruden and general manager Mike Mayock also fall on a large portion of the sword.

They put this defense together. They committed more dollar signs to it this past offseason. They’re as responsible as anyone for a defense that ranks among the league’s bottom five in sacks and points allowed. Guenther is the predictable fall guy, but hardly the sole reason for all that defines things.

But taking bad angles and allowing big scoring plays are often more about mental lapses than not being physically gifted enough. So too are foolish penalties at inopportune times. This goes much deeper than a weekly injury report.

“The confidence for our defense, it’s there,” said linebacker Nick Kwiatkoski. “Take what happened today, take what happened (against the Jets), correct those things and move on. We set ourselves up as a team in a pretty good position to finish strong. No matter what happens, just keep going.”

It’s a week-to-week league. There is zero chance anyone would have predicted these past three games following a thrilling 35-31 loss to the Chiefs.

But behind every mask is a face and that face tells a story. The Raiders have been able to hide their defensive shortcomings at times in earning a 7-6 record, but then a team like the Colts comes along and the secret gets exposed all over again.

Teams with this kind of defense might stay in the playoff hunt until the end. Heck, it might even sneak into the tournament with some serious good fortune.

And yet until things get fixed — it’s going to take a lot more than a change at coordinator — contending for anything more isn’t at all reasonable.

No matter how much the NFL is set up to make you believe otherwise.