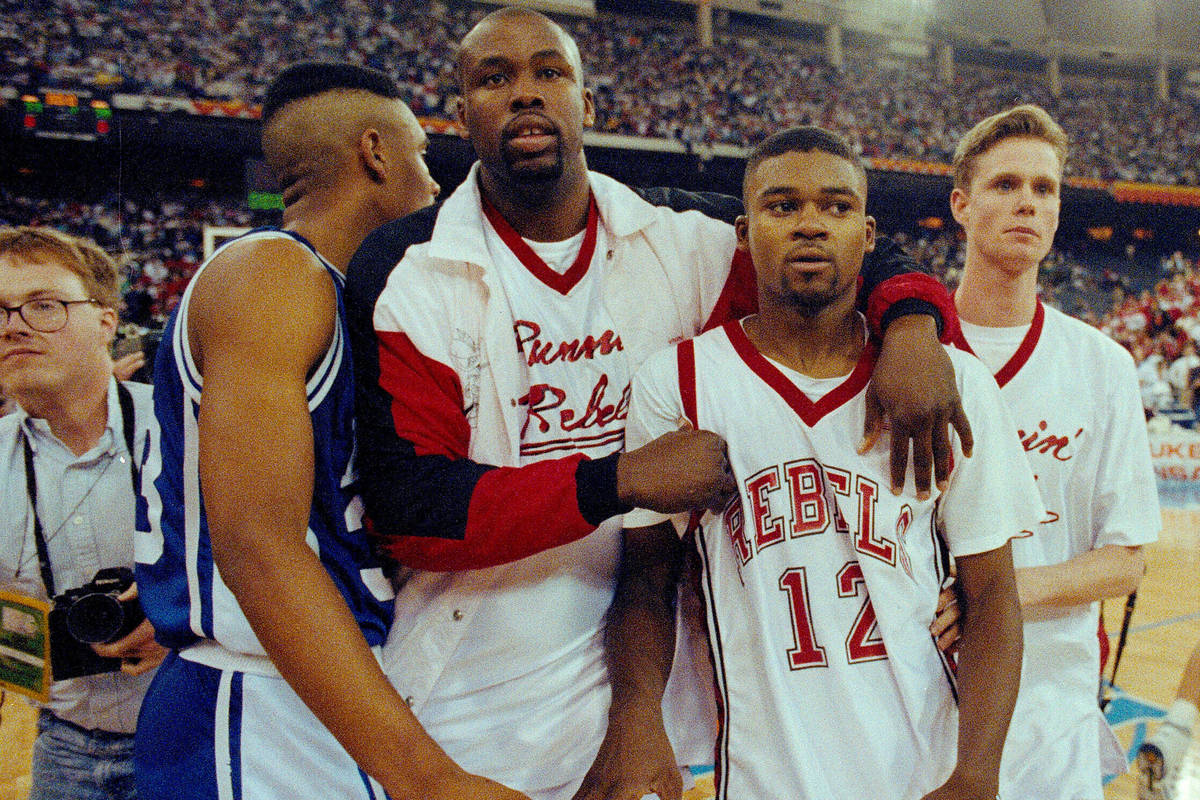 In this March 30, 1991, file photo, UNLV's Anderson Hunt (12) and unidentified teammates leave the floor after losing to Duke in an NCAA national semifinal game in Indianapolis. UNLV came down court with one final chance at keeping its dreams alive, but Anderson Hunt's 3-pointer with 2 seconds to play bounced off the rim. (AP Photo/Al Behrman, File) 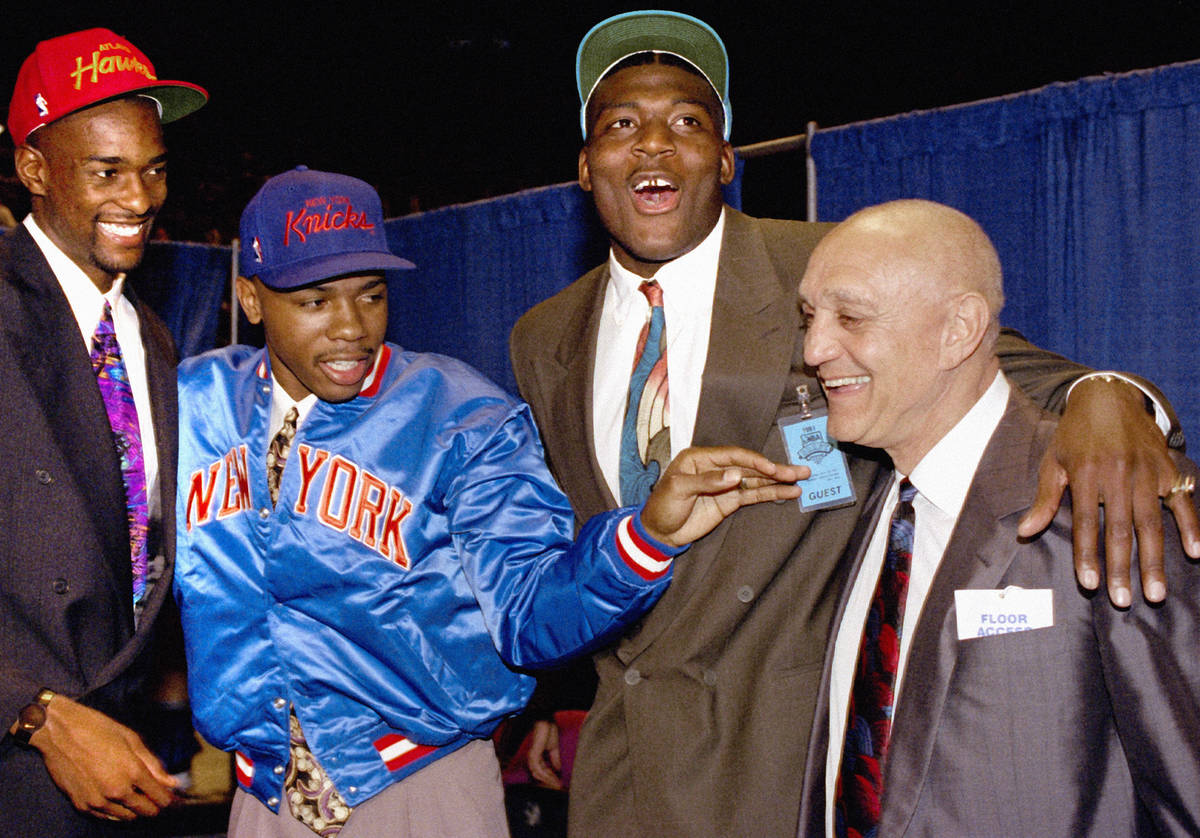 University of Nevada-Las Vegas coach Jerry Tarkanian celebrates with three of his Runnin' Rebel alumni after they were selected in the first round of the NBA draft at New York's Madison Square Garden, June 26, 1991. From left are: Stacey Augmon, picked by the Atlanta Hawks; Greg Anthony, picked by the New York Knicks; Larry Johnson, the top pick overall of the Charlotte Hornets; and Tarkanian. (AP Photo/Ron Frehm)

I know a guy who has never engaged in the popular debate about who’s better — Michael Jordan or LeBron James.

That’s because he thinks Oscar Robertson was superior to both.

Different eras. It’s all in the eye of the beholder.

Gonzaga was the 20th team to enter an NCAA Tournament undefeated and can conclude the craziest of seasons with a 32-0 record by winning in the Final Four semifinal on Saturday and the national championship game on Monday night.

Already, though, comparisons to those who came before are stronger than Drew Timme’s mustache game.

There are two schools of thought and neither is necessarily wrong: First, to be rated among the all-time best sides, a program must finish its journey to the top. Be the last team ascending a ladder. The final snapshot of “One Shining Moment.”

Second, talent accomplishes things nothing one else can, meaning you can still live within such rarefied air without winning a title. I’m on this side. Too many variables exist for any sort of absolute judgment.

Danny and The Miracles from Kansas was a nice little tale in 1988. Oklahoma had Stacey King, Harvey Grant and Mookie Blaylock. You get the point.

Rebels of the past

You can’t have the best-ever debate and not include that particular Rebels’ squad, which won its first 34 games before Anderson Hunt’s deep 3-pointer bounced off the rim and Duke prevailed 79-77 in the Final Four.

It was a better UNLV team than the one that ripped Duke by 30 in the previous season’s championship game. It’s certainly not a stretch to say the ’91 roster was the greatest in history not to win it all, being ranked No. 1 all season and having just one game decided by fewer than 10 points.

Three of the NBA’s top 12 draft picks that year played for Jerry Tarkanian.

Stretch nothing. It was the best team that fell short.

That’s the magic of March Madness. Jim Valvano running around a court looking for someone to hug is as memorable a Final Four moment as there is. But his North Carolina State squad wasn’t nearly as good as the Houston one it beat in 1983. Villanova played the perfect game in 1985. It wasn’t better than Georgetown. The examples are endless.

Nothing defines sports better than subjective arguments about which there is no unanimous answer. Gonzaga could lose to UCLA in the Final Four or whichever team emerges from Baylor-Houston, and there would be a certain segment that would immediately disregard all the Zags accomplished to that point. Crazy, yes. But true.

The best team I ever saw live was Kentucky of 1996. Just ridiculous talent. Rick Pitino as coach. Nine future NBA players on the roster. Stupid good.

The best offense I’ve ever seen is Gonzaga’s this season. Its efficiency rate is on pace to be the highest in history. It produces scoring runs like Chris Beard does dream jobs.

Seven teams have finished a season undefeated. Of them, four are from UCLA. And yet the most frustrating part is that the passage of time never allows for a true contrast between then and now.

How the Zags might have stacked up against the San Francisco Dons of Bill Russell or the Bruins of Lew Alcindor and Bill Walton or the Tar Heels of Michael Jordan or the Hoyas of Patrick Ewing or the Hoosiers of Scott May is left to water-cooler squabbles.

How would this near-flawless offense execute against the Amoeba defense of those great UNLV teams?

Argue all you want. There’s no better time for it. But watch this Final Four closely.

Because no matter where you stand on the best of all time, chasing history is a pretty cool thing to witness.