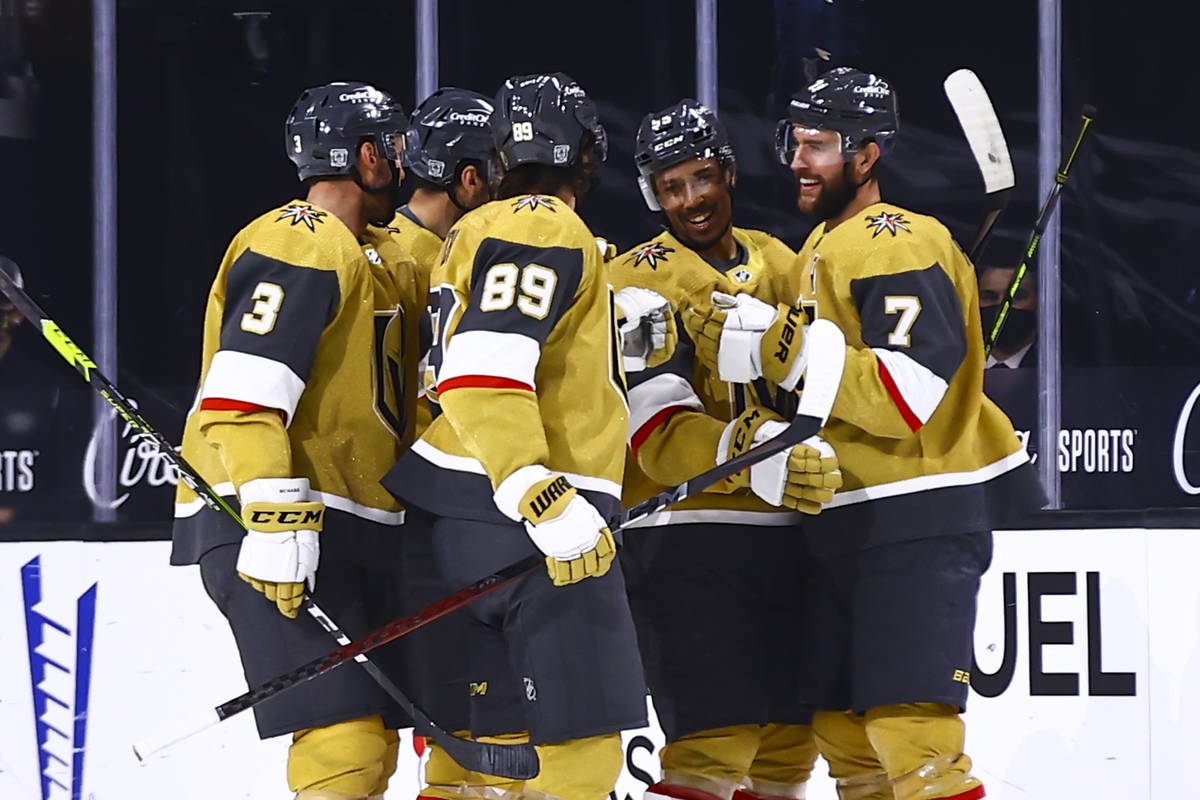 The easy answer is one about leadership in the room.

But there are more layers to be unearthed, reasons as to why the Golden Knights have a level of confidence larger than T-Mobile Arena.

Late-game drama wasn’t needed Wednesday night when the Knights won a team record fourth straight to open a season, this a 5-2 final against an overmatched Arizona team.

Everyone says they believe. There is even a popular chant about it that reverberates throughout college basketball arenas nationally. But it doesn’t mean much without accompanying evidence. You have to make it happen. Have to prove it.

“Since this team was made (in 2017), that has been the M.O. here,” said forward Ryan Reaves, who arrived via trade in February 2018. “I remember when I got here, it didn’t matter what the time of the game was or the score was — this team just always seemed to come back. I think it just stuck with this team as part of the culture.

“The fact we believe it definitely helps, too. You have to believe it first and then put it into action.”

The sample size is small, but already such a trait can be seen this season. The Knights weren’t very good a majority of time in their first three games and yet won them all.

They were really good in the third period during those victories.

They were really, really good most of Wednesday.

Their goalies have been exceptional, and Mark Stone still appears quite capable at hockey.

Goal differential. Expected goals. Shots. Name a stat that matters, and they have had an edge in those final 20 minutes in these first four games, a third period in which they have outscored opponents 9-1.

(Well, they haven’t had much of anything on the power play, on which the Knights are 1-for-14. But their penalty kill is ridiculously good, so it’s the special teams equivalent of a high school kid returning kicks when trying to score with an advantage and Cordarrelle Patterson doing so when defending against it.)

NHL teams usually receive six exhibition games to work all the sloppiness out of their game. For bodies to acclimate to the speed of things. To remember what those hits and blocks feel like.

They got zero such matchups this season because of a condensed schedule, and yet you can make an argument the Knights received the next best thing: Opening with two games against Anaheim and four versus Arizona.

Hardly the Acura RLX of the Honda Division.

But Knights coach Pete DeBoer sensed this never-give-in conviction begin to develop even before last season was paused because of the coronavirus pandemic. He saw even more of it when the league returned to a bubble existence. Saw it when the Knights would win games. Saw it even as they lost the Western Conference Final series to Dallas.

“I think it’s a veteran confidence level in what we’re doing,” DeBoer said. “I felt in the bubble that there was a composure to the group that we felt we could win every night, and that’s contagious.

“It’s a nice feeling to have as a coach. At the same time, we’ve got to do a better job of not putting ourselves in a spot where we have to come up with a huge third period in order to win. We have to set the table for ourselves a little bit better and make that path a little bit easier.”

They did so Wednesday and now will hit the road for the first time, returning two games in Arizona. It won’t always be this way — (much) better opponents are soon to come — but confidence can be a weighty advantage.

When you’re as talented as these Knights, even more so.