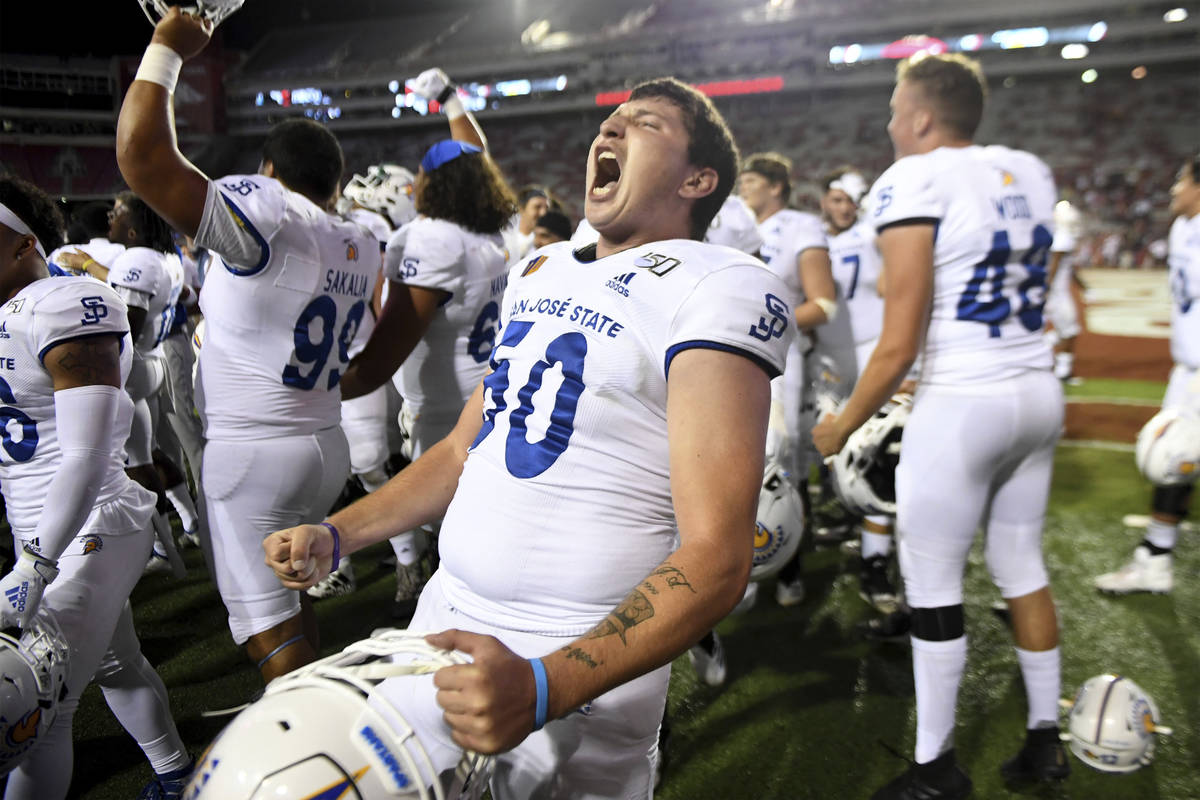 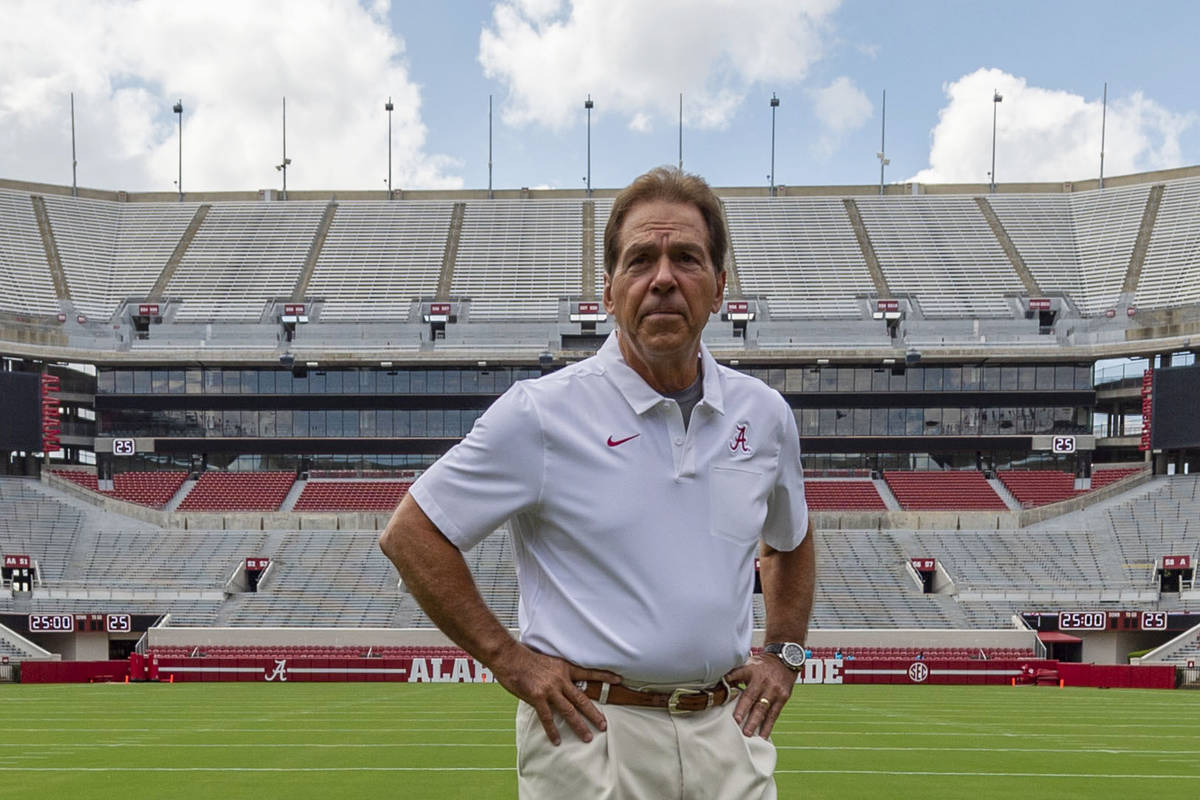 FILE - In this Aug. 3, 2019, file photo, Alabama head coach Nick Saban prepares for a team coach photo prior to Alabama's fall camp fan-day NCAA college football scrimmage at Bryant-Denny Stadium in Tuscaloosa, Ala. This is the time of year when the Southeastern Conference usually validates its claim as the best league in college football by dominating neutral-site nonconference matchups. The SEC is 21-6 in regular-season nonconference games against Power Five opponents at neutral sites since 2012. (AP Photo/Vasha Hunt, File) 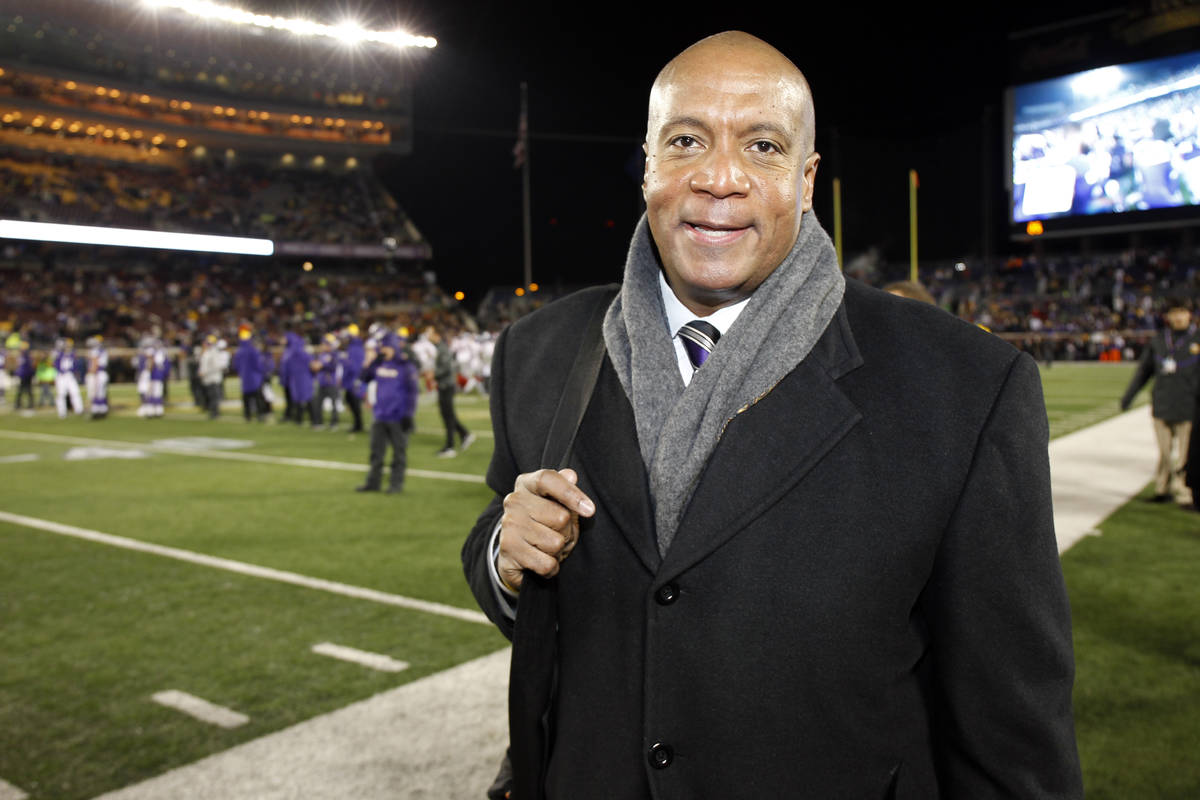 Collegiate sports have hardly proven safe from the financial calamity caused by COVID-19. An economic vise has tightened its jaws on athletic department budgets across the nation.

Programs of all levels are feeling the pain.

Already, Power Five conferences in the Big Ten and Pac-12 have announced they will play league football games only this season, assuming there is one. Their power brethren in the Atlantic Coast Conference, Big 12 and Southeastern Conference could soon follow in cancelling non-league games.

Such decisions are often disastrous for those Group of Five schools that rely heavily on guaranteed payouts for agreeing to play — and almost always lose — a road game against a Power Five opponent.

But more than the millions of dollars being lost to programs whose skeleton budgets rely on such a distribution of funds is where the future of a certain governing body lies.

For years now, whispers have suggested power schools would form their own collegiate establishment by separating from the NCAA. Think of 65 or so conference-affiliated schools and some prominent independents boarding a gold-plated train of riches and leaving all others behind.

Power Five programs already run college football and its playoff. It’s hardly a stretch to believe that monetary effects of the coronavirus wouldn’t cause them to finally depart the NCAA, whose influence within the structure becomes more irrelevant with each questionable decision.

“I think if anything is going to cause a serious consideration of (Power Fives breaking away), this is it,” said Pat Forde, award-winning college football and basketball writer with Sports Illustrated. “When all this happened with (COVID-19), there was this sense of general mourning that was like, ‘Well, we’re all in this together and let’s see if we can make the best out of it.’

“By mid-summer, it was back to, ‘Whatever is good for us is good for us and if it’s not good for you, too bad.’ It has reinforced the fact we don’t have a unifying body — the NCAA doesn’t fulfill that task. Certainly not when it comes to football.”

Which, of course is all that matters.

They played a football game in front of 56,058 at Reynolds Razorback Stadium last September.

Arkansas, out of the mighty SEC, paid San Jose State of the not-so-mighty Mountain West Conference $1.5 million to travel the 1,798 miles and essentially get whooped for its time.

As the final seconds ticked away, however, the 20-point underdog that never trailed walked off a 31-24 winner.

“They outplayed us and they out-coached us,” then Arkansas coach Chad Morris would say. “For three quarters, they were the SEC football team.”

Not in any sense beyond what occurred over 3½ hours on a sweltering Fayetteville night.

Not on the same planet otherwise.

USA Today reported that, of those contracts it obtained, payouts for 227 games involving FBS teams this season were for nearly $138 million. Also, that games involving Power Five teams equaled payouts of $122 million.

Massachusetts is guaranteed $1.9 million to play at Auburn, a game that will be canceled if the SEC also goes to a conference-only schedule. Central Michigan was to make $2.15 million for playing Nebraska and Northwestern. Not any more.

Ditto for San Jose State, the nation’s Team of the Week following its victory at Arkansas last year. The Spartans were to make $1.5 million for a game at Penn State.

“My first reaction was that the young men in our program weren’t going to have an opportunity to play at one of the most prestigious football institutions in the country,” San Jose State athletic director Marie Tuite said. “I was crushed. But we understand there is a larger issue going on here, which is obviously the safety and health of our country.

“I think sometimes people see these games and think they’re strictly for guaranteed money. That’s certainly crucial for our program. But the Arkansas experience will be remembered by (student athletes) for the rest of their lives. When you create these touchpoint moments and life-long memories for young people, there is nothing better in athletics.”

It’s one of the ancillary benefits for Group of Five programs. So too is the chance for players to be showcased on some of the game’s grandest stages.

Maxx Crosby played at Eastern Michigan in the Mid-American Conference, and the second-year defensive end for the Las Vegas Raiders credits non-conference games against Power Five teams for him being drafted in the fourth round.

“You know, a lot of people said, ‘Well, he’s really good, but he’s not playing anybody,’” Crosby said. “ So when we played (Power Five teams), I was extra, extra ready to perform. It’s a big deal for kids.”

And yet there is a growing sentiment within Power Five schools that, given no real end to the coronavirus is yet visible, the gap between them and others has grown even further. That entities from revenue streams to strategic planning and all other significant details are now on the table for discussion.

Basically, to wonder now more than ever, how much they really need those from lower conferences.

“I sure hope such conversations are not taking place,” Tuite said. “I hope there is a united front and not a conversation of separation.”

This was NCAA president Mark Emmert on Thursday: “Sadly, the data points in the wrong direction. If there is to be college sports in the fall, we need to get a much better handle on the pandemic.”

Eventually, at a point nobody is certain, college sports will return. And how dire a financial state things are when that sliver of light shines from those dark skies could determine how long the current model of intercollegiate athletics lasts.

More than 100 sports have been cut across the country at various universities. Budgets, both big and small, are being slashed. Football guarantees that helped Group of Five schools keep their heads above water have now disappeared while shoving some athletic departments deeper and deeper below the surface.

Maybe it happens in a year. Maybe two. Maybe longer. But if the coronavirus has suggested anything, it’s that college sports could soon undergo a massive reform that will cause a collection of programs to finally create their own new world.

“It would be ‘Hunger Games,’ man,” Forde said. “Every (non-Power five) school will be for themselves, trying to put out the best resume. We saw it when the Big 12 was flirting with adding teams. All of a sudden, it was Cincinnati and Memphis and Brigham Young and Colorado State and Boise State and everyone else trying to get in the club. It would be the same thing this time.

“I was on Dan Patrick’s (radio) show and he put it perfectly — we basically now have the five crime mob families and each of them is looking out for their own best interests.”

As for the Group of Fives, it’s hard to go against the family when you’ve never been part of it.

And for the vast majority, never will be.