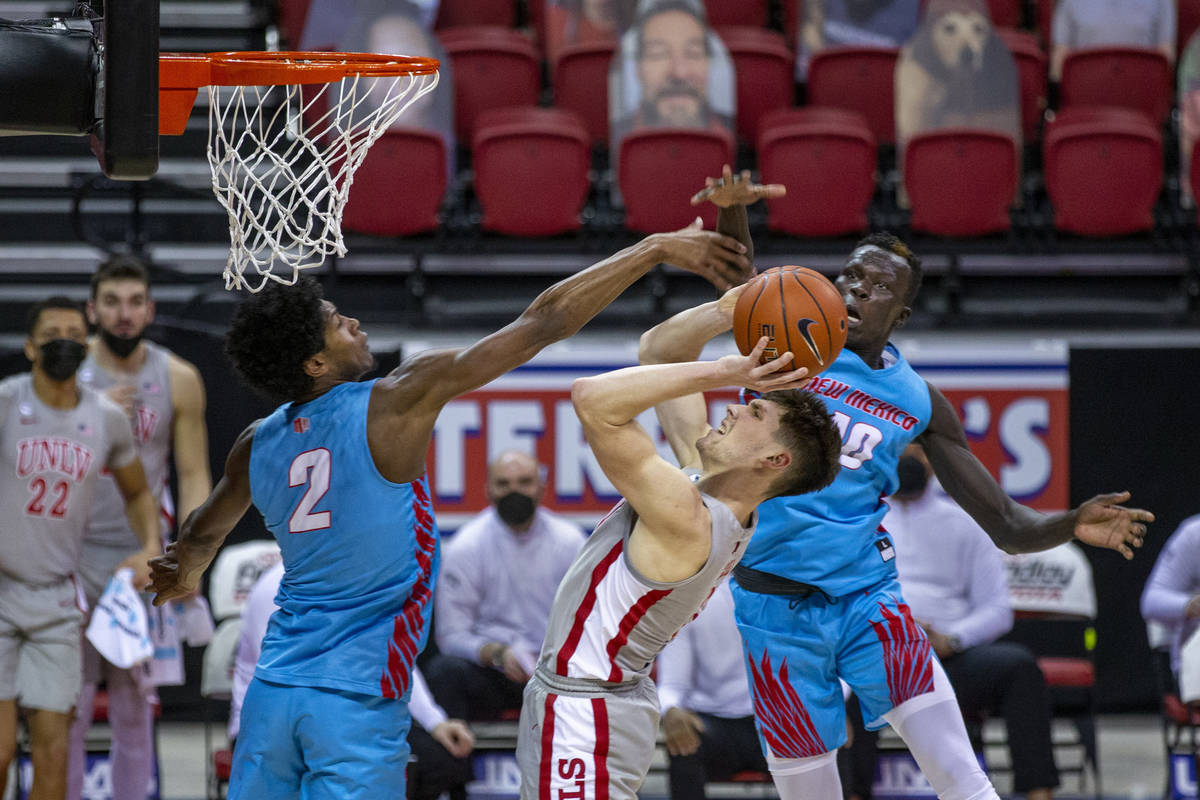 UNLV Rebels guard Caleb Grill (3) leans back to get off a basket between New Mexico Lobos guard Saquan Singleton (2, left) and New Mexico Lobos guard Makuach Maluach (10) during the second half of an NCAA menÕs basketball game at the Thomas & Mack Center on Saturday, Jan. 16, 2021, in Las Vegas. (L.E. Baskow/Las Vegas Review-Journal) @Left_Eye_Images

There are countless college basketball teams across the country struggling in these COVID-19 times, either with having to pause activities or games being canceled or just the mysterious aspects to such a bizarre reality.

I’m not sure how (why?) they’re getting through the season, a team UNLV handled 77-54 on Saturday at the Thomas & Mack Center.

Think about it: New Mexico relocated out of state Nov. 20 and has pretty much been on the road since. The Lobos found home bases in Lubbock, Texas, and most recently St. George, Utah.

I was in Lubbock once. Had a good pizza joint. And there you have it.

The Lobos have returned to Albuquerque a few days at a time — for things such as final exams and Christmas — but were unable to practice there per state guidelines.

They spent a week in Houston last month, where they beat Rice and teams called Our Lady of the Lake and LeTourneau, the latter against players from either a small Christian university in Longview, Texas, or the staff from a local French restaurant.

At one point, while staying at a Residence Inn in Lubbock, there wasn’t a meeting room large enough to accommodate the team and staff. So they watched film in the lobby while hotel guests were checking in and out not 20 feet away.

It gives a whole new meaning to those arrival benefits attached to Marriott points.

Consider also: The Lobos have 12 new players and a handful of new staff members. There was no summer or fall practice, so forget about forging much continuity.

“It’s a challenging hand they have been dealt, for sure,” said UNLV coach T.J. Otzelberger, whose team was on pause because of COVID-19 and went more than a month between games. “We’ve all had our challenges. I don’t want to compare one team or program to another. It’s a really tough year and hard to look at teams and decide what’s going on or not because of the adversity and the challenges they’ve had. Certainly, that’s the case for that New Mexico club.”

New Mexico’s football team also was displaced and spent much of the season living out of the Hilton Lake Las Vegas Resort & Spa while playing three “home” games at Sam Boyd Stadium. Made sense. The program would have lost about $3.7 million in TV payouts by opting out of the season.

There isn’t that type of money at stake with basketball, and yet New Mexico coach Paul Weir and his team forge ahead, trying to remain upbeat in the face of such uncommon times.

The teams play again Monday at the Thomas & Mack, and it would be a stretch to think the outcome will be much different.

On a day in which UNLV announced junior point guard and assists leader Marvin Coleman would miss the remainder of the season with a stress fracture in his right leg, the Rebels were solid in several areas.

You won’t find many better stat lines than that of Bryce Hamilton (19 points, eight rebounds, a career-high eight assists and four steals), while forward Mbacke Diong (20 points on 9-of-11 shooting) is playing the best ball of his career lately.

With Coleman out, freshman Nick Blake (a career-best 18 points and three assists in 24 minutes) should be the answer to sharing the point guard spot with David Jenkins Jr.

“We need better communication because we don’t have (Coleman), guys who celebrate each other even more, because Marvin is one of those guys always pulling for everybody,” Otzelberger said. “We need guys to do selfless things.”

That, and a lot more guys who can shoot.