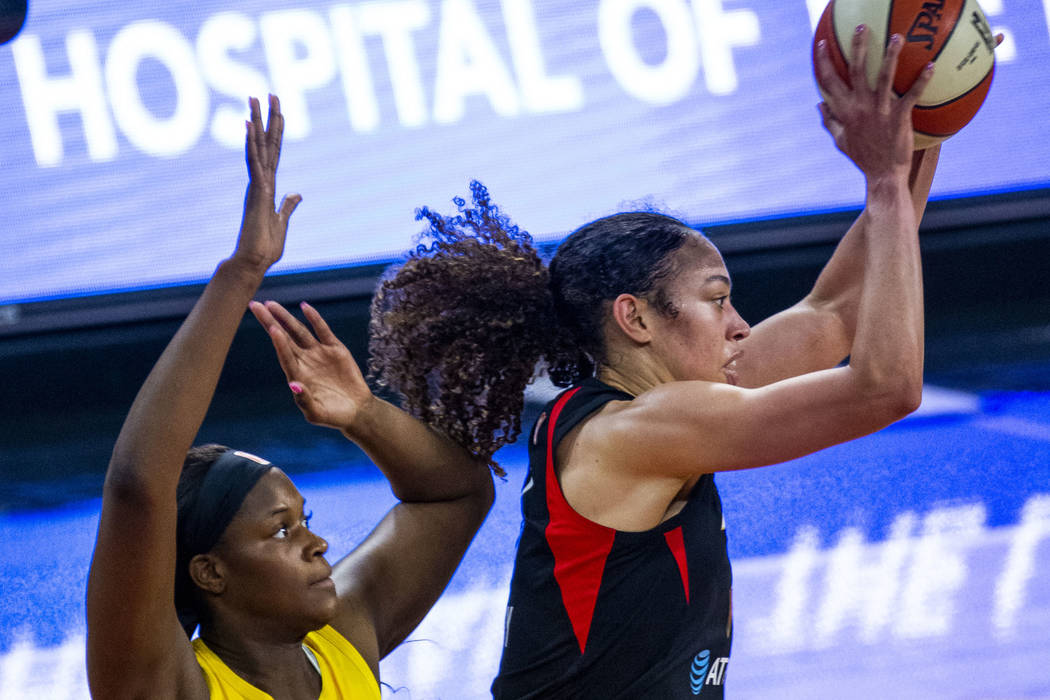 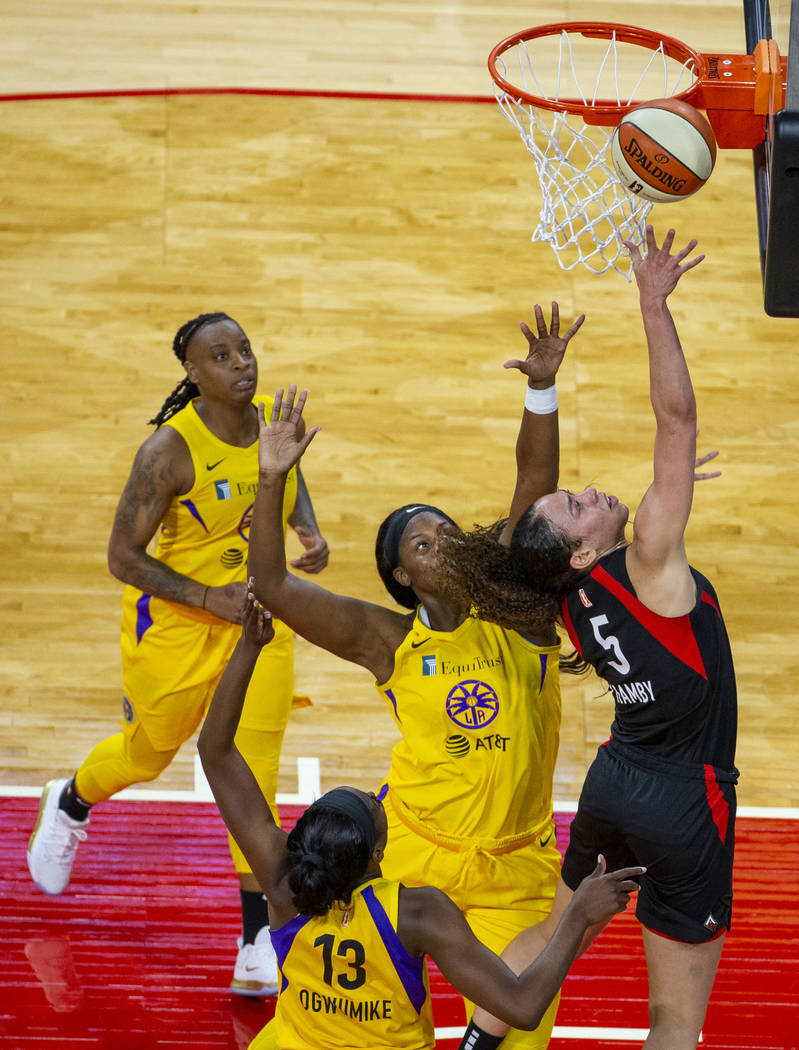 Las Vegas Aces forward Dearica Hamby (5) lays in the ball over Los Angeles Sparks center Kalani Brown (21) and teammates during the the second quarter of a WNBA basketball game at the Mandalay Bay Events Center on Sunday, May 26, 2019, in Las Vegas. (L.E. Baskow/Las Vegas Review-Journal) @Left_Eye_Images

Amaya knows that Mommy shoots and, in time, will also come to understand about things like rebounding and diving on the floor for loose balls and earning as many deflections as quick defensive hands can create.

Mommy is really good at all those things.

It makes for an even better Aces basketball team.

The hype machine is in overdrive for the WNBA side from Las Vegas, but if all those lofty predictions about competing for a league championship have any chance at becoming reality, it’s going to take more than a starting lineup of star power.

They couldn’t have asked for a better beginning to their second season since relocating from San Antonio, an Aces team that on Sunday handled the Los Angeles Sparks 83-70 before an announced gathering of 7,249 at Mandalay Bay Events Center, where the likes of Kobe Bryant sat among a collection of famous faces.

Everyone wants to start. It’s part of a professional athlete’s DNA. It’s within the juice that drives a competitor. It’s no different for Hamby, the only mother on the Aces roster, a fifth-year pro who signed a three-year contract extension in the offseason.

Problem: The Aces are unbelievably good up front.

Which, I suppose, is more a problem for opponents.

Liz Cambage (Achilles) was held out for the Aces and it didn’t make much difference, the star center watching as her new team rolled to a 45-31 halftime lead and was barely pushed thereafter, a big part of the decisive win being a bench led by Hamby.

She finished with 12 points, 14 rebounds, three assists, two steals and three blocks in 27 minutes, a player who before agreeing to her new deal and hearing rumors that Cambage might soon be dealt to Las Vegas from Dallas, asked coach Bill Laimbeer how he envisioned her role.

The answer: A great bench player on a championship team.

“I will gladly take that,” Hamby said. “In order to have a championship team, I know we will need players like me coming off the bench and doing the little things that make a difference in games. I may lose a few minutes (because of Cambage’s presence), but if we’re a good team, that doesn’t bother me.”

She is the all-time leading scorer and rebounder in Wake Forest women’s history and is the sort of pro whose trajectory continues to rise as each season passes. She just keeps adding different facets to her game. She just keeps getting better.

She feels more balanced now, something that was missing when her 2-year-old daughter was born in 2017.

More secure. More confident in how things are working out.

“Early on, I was so focused on my family,” said the 6-foot-3-inch Hamby. “But with her getting older and the incredible support staff I have around me, I’m more comfortable in my role as a Mom who can also have this career. She knows when I leave for practice, where I’m going. And then when I get home, all she says is, ‘Mommy, shoot, shoot.’”

Hamby was just 3-of-12 from the field Sunday, but played to a team-best plus-20, because when the Aces needed an early lead to be extended, their backups were the ones doing the pushing.

It’s one game, and yet already you can see how difficult to guard the Aces will be inside most nights. Cambage is the league’s most dominant post player, soon to be paired alongside reigning Rookie of the Year A’ja Wilson (21 points, 11 rebounds Sunday).

And then will come a player who would start on at least half of the league’s teams.

“When (Hamby) plays with energy, she makes things happen,” Laimbeer said. “That’s what great bench players do. They come in and give everything they have. Fans feed off that and teammates appreciate it. Starters are starters. They match up against the other great players. And if our bench can then push the lead, wonderful.

“When I told (Hamby) she could be a great bench player on a championship team, she told me that was the best compliment I had ever given her.

“I don’t give many compliments.”

He had a few for her Sunday, all more than deserved.

Mommy played well, Amaya is learning more about basketball and the Aces are off and winning.