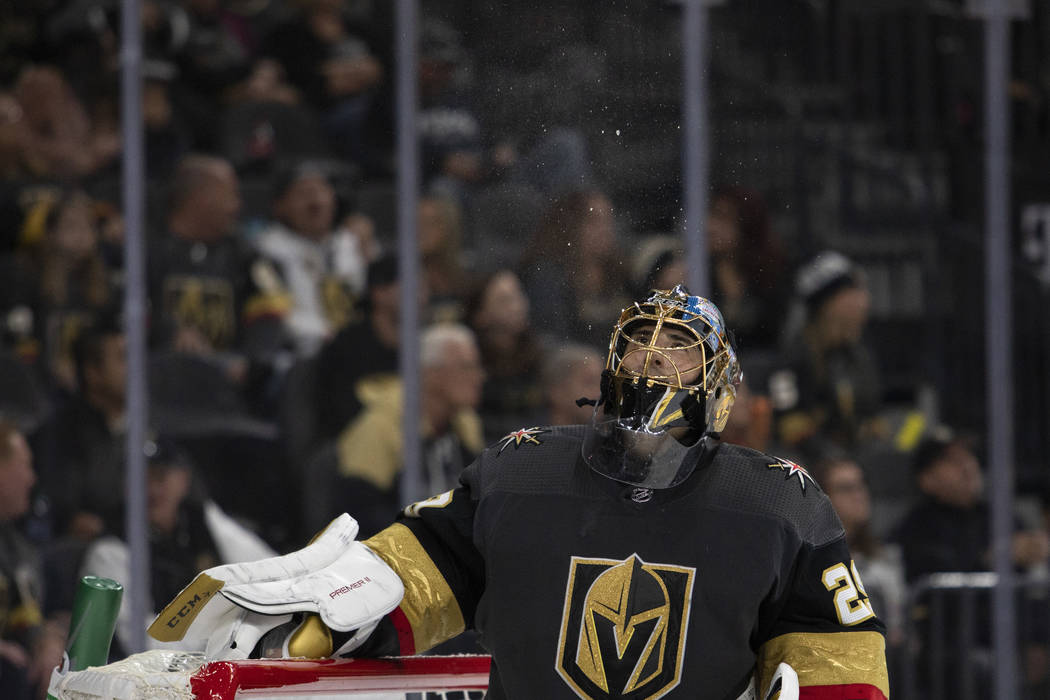 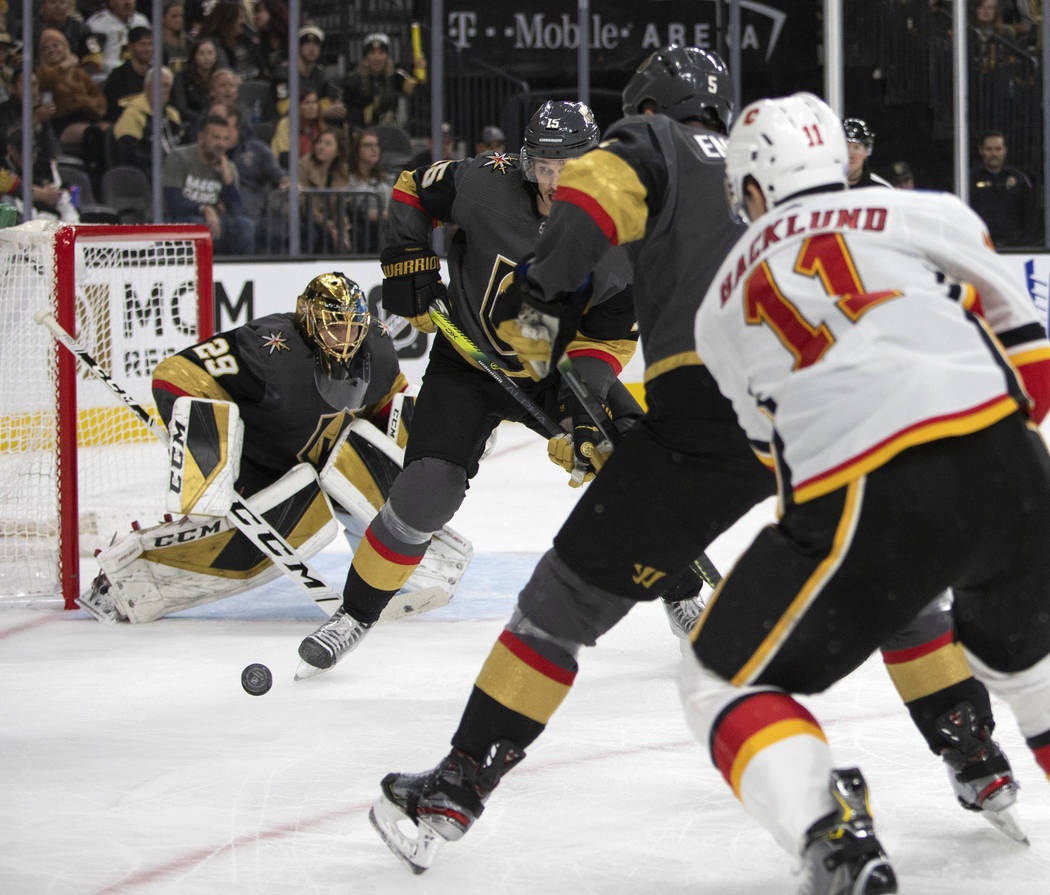 Golden Knights goaltender Marc-Andre Fleury (29) is about to block a shot from the Calgary Flames during the second period of their NHL hockey game on Sunday, Nov. 17, 2019, at T-Mobile Arena, in Las Vegas. (Ellen Schmidt/Las Vegas Review-Journal) @ellenkschmidt_

It wasn’t a tickle this time.

Hey, if it takes Marc-Andre Fleury offering a poor man’s Mason Rudolph impression to get things going, the Golden Knights will gladly play along.

The losing streak is over and the Knights are again ahead of San Jose in the Pacific Division standings, meaning Las Vegas has for the moment avoided total combustion with a majority of its citizens wandering the streets aimlessly like a bunch of zombies.

They can thank what was the best 60-minute effort from the Knights in some time Sunday, a 6-0 thrashing of Calgary before an announced crowd of 18,083 at T-Mobile Arena.

They can thank, mostly, the guy in net.

Tempers flared throughout — it happens when one team in Vegas had lost five straight coming in and another in Calgary had dropped its previous three — and Fleury did his best to be part of the heated exchanges.

Which is always a ridiculously amusing thing.

The Knights led 1-0 at 8:27 of the second period when Flames forward Matthew Tkachuk fell on Fleury and found himself tangled with the goalie and Knights defender Jon Merrill, who promptly removed Tkachuk’s helmet.

Tkachuk then swung toward Fleury, who followed by running his glove over the player’s head and then ever-so-lightly his face.

“I just wanted to punch him,” Fleury said. “Every time he does this — he falls down and then hits me on the back of the head. I had to control myself. He’s always trying to poke you or slash you or something. It was nice of me to rub his head. His (hair) was a little crazy. Tried to fix it up a little.”

Was it the same feeling as when he tickled the ear of Winnipeg winger Blake Wheeler during the Western Conference finals two years ago?

“There was no anger with Wheeler,” Fleury said.

Playing mad seems to have helped all of the Knights, even the one who stood tallest.

Fleury would stop all 34 shots aimed his way, including a few that could have made things a whole lot tighter before the Knights — get this — actually extended their lead in what has been a dreaded third period of late.

It meant a 58th career shutout for Fleury and a whole lot of free donuts for Las Vegas.

“He has been our best player for 2½ years,” Knight coach Gerard Gallant said. “He wanted to win bad. He was focused and ready to go. I thought our team played well, but he again led us.”

It has been an interesting season for Fleury, set to turn 35 on Thanksgiving.

There wasn’t a better NHL goalie to start things over the first several weeks of October, but as his team began to slide, his game wasn’t nearly as sharp.

Entering the game Sunday, Fleury’s 5-on-5 save percentage of 87.6 this season is the lowest of a terrific career, and yet he is playing better than ever during the penalty kill (95.3).

It’s always a goal-by-goal matter when judging Fleury and those who play his position, blame often spread between several on the ice at the time a horn sounds.

Often, a final score doesn’t come close to clearly evaluating how one performs.

Had it not been Fleury in net, the Blackhawks might have scored eight or nine.

Had it not been him Sunday, a 2-0 game in the third period would have surely been 2-1.

The Knights got caught out of position with 14:01 remaining when Fleury made a phenomenal slide to his right to deny Mark Giordano sneaking through the back door.

“A huge save,” said Knights forward Max Pacioretty. “It could’ve easily been a 2-1 game but (for) the timeliness of that save. And then (we were) able to go the other way and score a goal, score a couple more and end up with a win. That kind of shows what we needed. It says a lot about (Fleury) and why he’s one of the best players in the league.”

Said defenseman Nate Schmidt: “Very few people in the world can make that save.”

They have one who can and Fleury was at his very best Sunday.

Stopping shots, rubbing heads, doing whatever was needed to halt the streak and allow the town to avoid losing its collective minds at the mere idea San Jose had, for 24 hours, caught its beloved Knights.