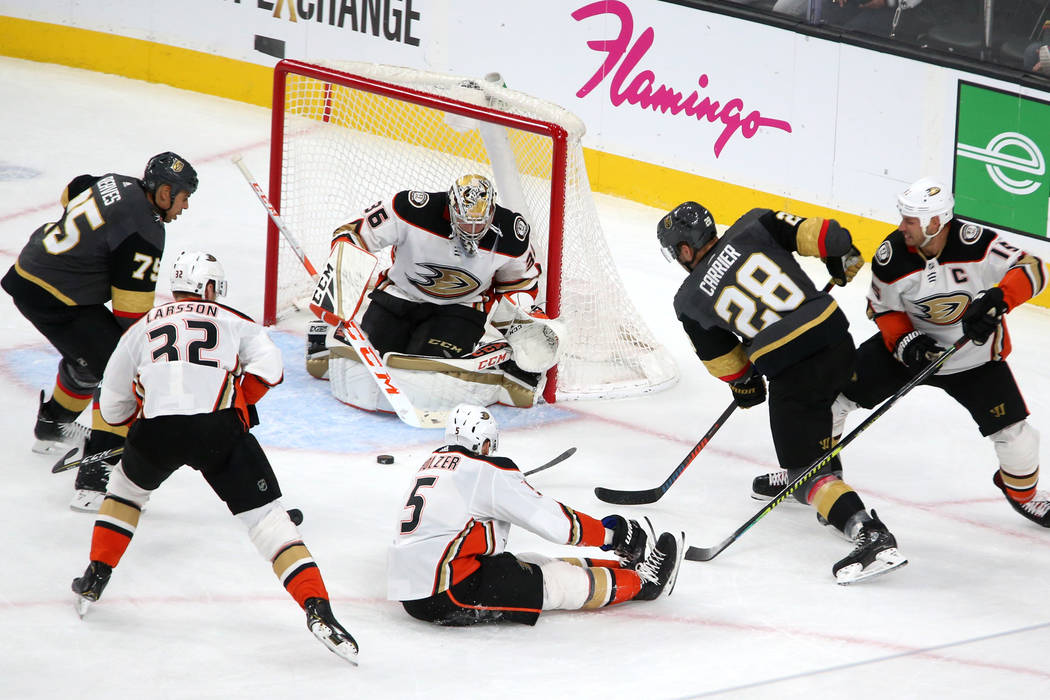 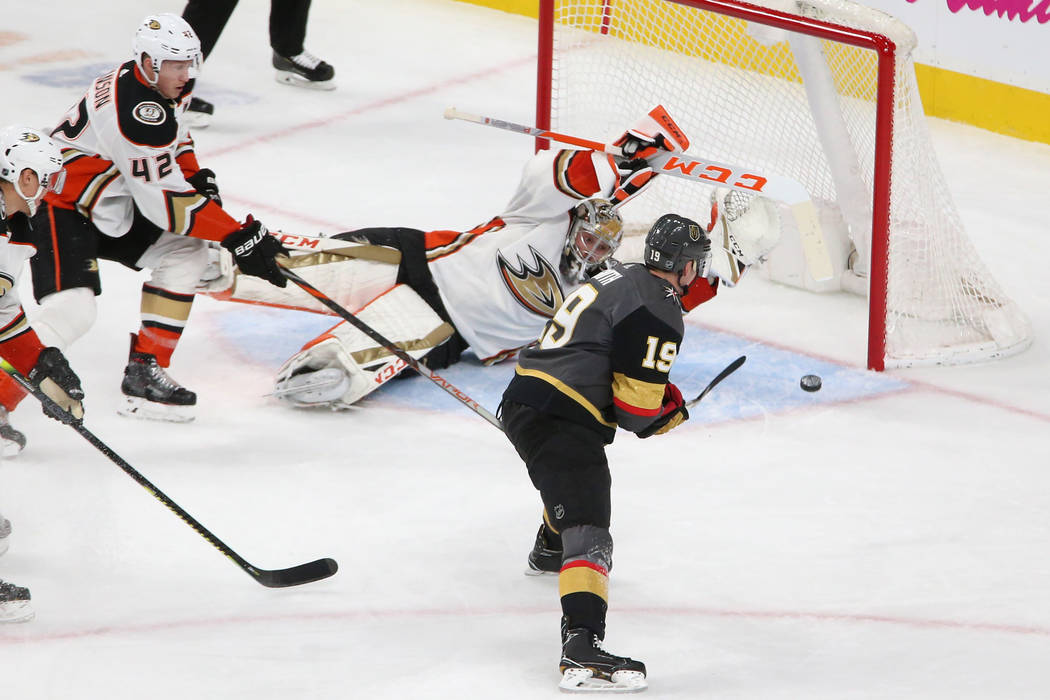 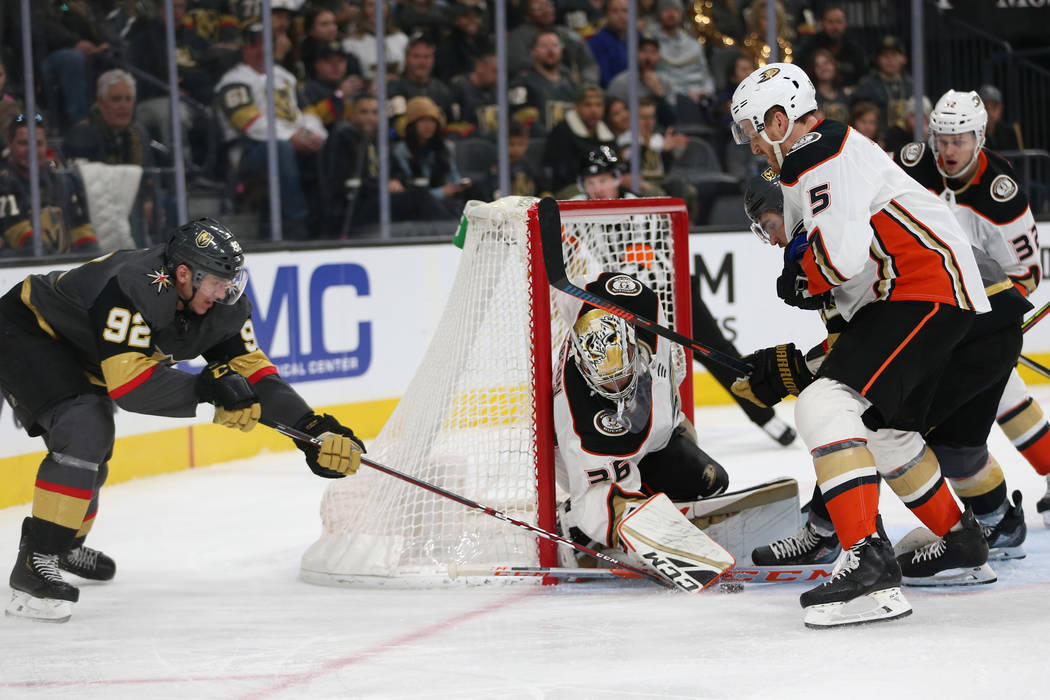 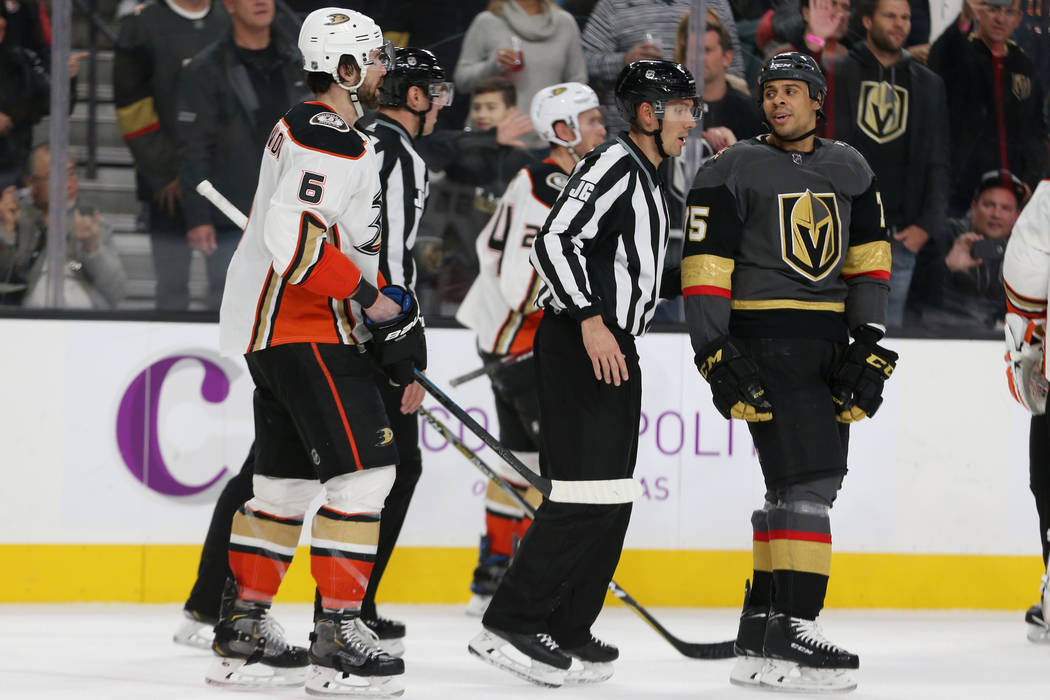 When sides are chosen for a pickup game, they’re still the ones whose names are called last.

Do the little things, outwork your opponent and — don’t you just love this one? — grind away.

But if these are the Golden Knights as we are to know them this season, the team’s fourth line is proving as significant in overall results as it can be absent on a scoresheet.

You don’t see as much of William Carrier, Tomas Nosek and Ryan Reaves on the ice as others, but their importance to the pursuit of potential playoff success is becoming tougher and tougher to deny.

The Knights will enter 2020 playing in a manner that suggests the Pacific Division is indeed theirs for the taking, having dismissed Anaheim 5-2 Tuesday before an announced New Year’s Eve gathering of 18,320 at T-Mobile Arena.

The win follows a 4-1 victory against Arizona on Saturday, after which Coyotes coach Rick Tocchet addressed a major difference between who the Knights are now compared to the past.

He didn’t directly describe his team using the “I” word, but he might as well have.

He certainly insinuated it, unexpected for any coach, much less a hockey one.

More than anything, it reinforced the idea that the Knights haven’t, for some time, been that same high-flying side that advanced to the Stanley Cup Final as an expansion team two years ago.

That team was quick everywhere. Quick on pucks. Quick on the attack. It was actually quicker than it was fast, but that still worked at a historic level.

This current team of coach Gerard Gallant is different, still incredibly skilled across its top six forwards and yet more reliant on a physical nature, on those strengths a fourth line can offer.

“They’re providing a lot of everything, whether it’s on the forecheck or getting pucks on net,” forward Alex Tuch said. “They have been doing it all lately, which has helped our momentum and energy on the bench. We feed off all of it.”

If the Knights are going to indeed claim a division title and make a deep playoff run, there is no better blueprint to follow than these last two wins.

The fourth line was terrific Saturday, combining for three shots and 12 hits while offering the sort of momentum a top six needs to then deliver offense.

The numbers for Carrier-Nosek-Reaves on Tuesday — a 5-on-5 combined Corsi of 63.16, seven shots and 12 hits — caused even more chaos around the opposing net.

They created chances, even high danger ones, enough havoc to keep what is a terrible Anaheim defense playing in front of one the league’s best goalies (John Gibson) back on its skates.

Reaves has 12 hits alone in the last two games and leads the league with 184.

“I don’t know if we have really changed anything, other than we seem to be developing more chemistry as a line,” Nosek said. “We probably have to score some goals — that would be nice. But if the team wins, it doesn’t matter.

“(Gallant) trusts us. That’s a big part of it. As a fourth line, there might be times where you only get a few shifts a period. That’s tough to get going. But having (Gallant) trust us and put us out there more really helps.”

This is who the Knights are now, a heavier style that might at least slow down a team such as Colorado in the playoffs should the teams meet. The Knights aren’t near as fast as the Avalanche and have learned such in humbling fashion twice already this season. Maybe the Knights could bully Colorado over seven games.

It’s also a style that might allow them to stay with heavy and steady St. Louis, currently the Western Conference’s best team, which visits T-Mobile Arena on Saturday.

There are interesting scenarios to debate with a ton of hockey still to be played, but it’s true that energy can lead to wins at the most critical of times.

Something a fourth line can and, really, must deliver.

“I’m sure it can feel for them sometimes like a backup goalie, thinking they are going in and then being pulled back,” Marchessault said. “But when given the chance, they have been working really hard and influencing how the rest of us play.”

More than a cliche. Lots more.