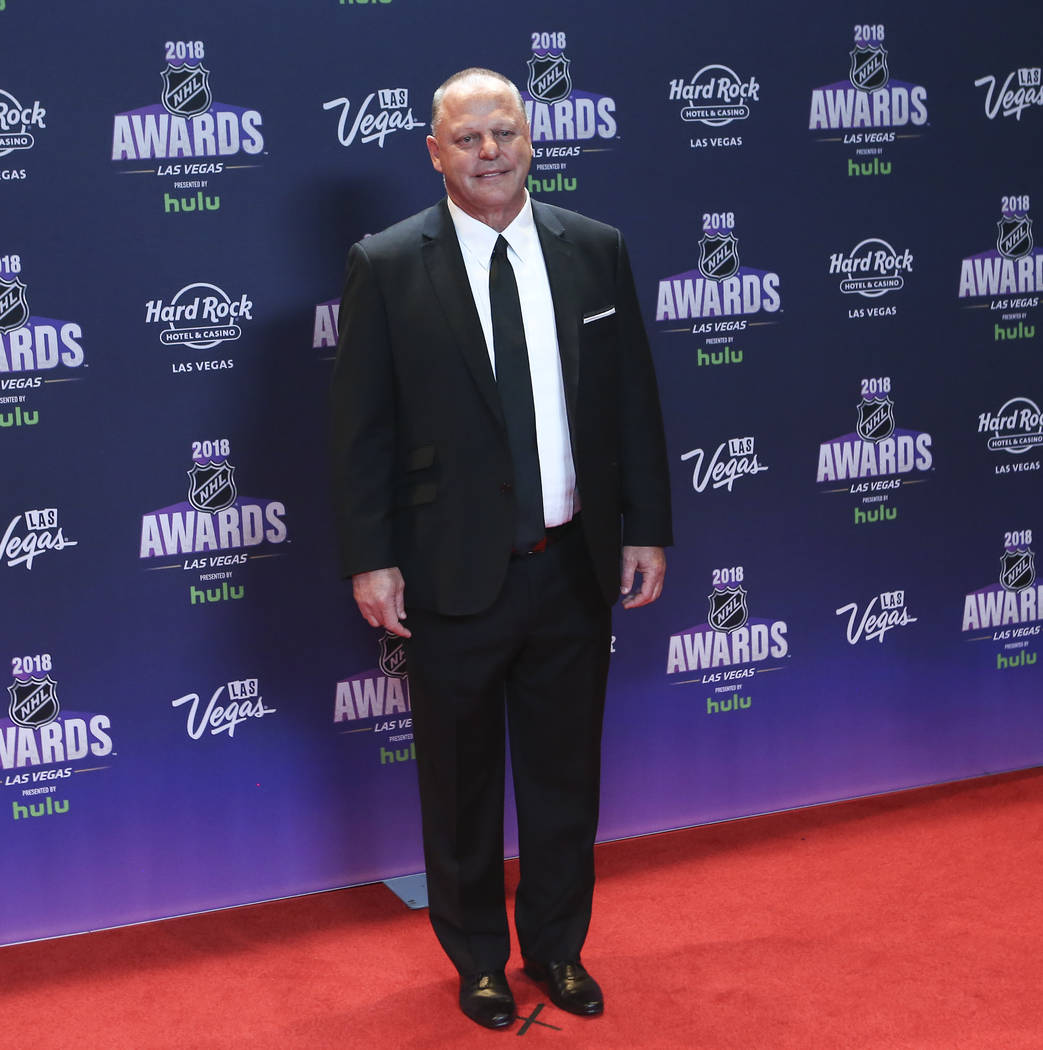 He said on Tuesday that should the award come his way any acceptance speech would last 45 seconds.

In the understated world of Gerard Gallant, that’s comparable to a Rand Paul filibuster.

Gallant on Wednesday night received the Jack Adams Award as NHL Coach of the Year, which in the context of deserving nods, think Daniel Day-Lewis and the Oscar for, “My Left Foot.”

Had the winner’s card not read Gallant’s name, it would have reduced those hanging chads in Florida some years back to a minor controversy.

He was that much a shoe-in, having proven more than worthy during the season, playing an incredibly significant role in creating all that the Golden Knights delivered.

He was actually left off one ballot — who in the world spun that buffoonery? — and despite what some suggested, it wasn’t by one of his grandsons.

More on that later.

It took a short time for him to get over losing in the Stanley Cup Final to Washington — “Cry for 4-5 days, play some golf, now feeling pretty good,” he said — because had he thought the Knights not played particularly well and were the better team, the pain would have lingered.

“We played good hockey, but Washington was the better team and deserved to win the Cup,” Gallant said.

There is no pretense to him, no puzzling traits, no quotes covered in hidden meanings. He’s a little uncomfortable with the sudden fame to have suddenly found him.

I’m not sure he has paid for a meal around town in nine months.

What you see is what you get — a terrific coach born and raised in Summerside, a Canadian city of Prince Edward Island, still his home when not in Las Vegas, a guy whose idea of fun is a round of golf with his buddies in the morning and a game of poker with them at night.

Historic best describes most everything about the Knights’ season, nothing like a typical expansion experience, instead a magical run to Pacific Division and Western Conference titles.

Here’s the beauty of Gallant’s coaching: He was hired, in large part, for his demeanor, thought by general manager George McPhee the ideal choice to build and mold and exhibit the needed amount of patience for a side most assumed would lose and lose big this first season.

Turns out, that sort of forbearance worked just as well with a team that won and won really big.

He not only offered ample opportunity to several players who hadn’t yet it their careers received one, but never wavered from his belief in them.

He never gave up on anyone.

“Gerard is a regular guy,” McPhee said. “He’s a common man, like hopefully most of us are, who happens to be in a great game. He’s as honest as they come. There are lines you don’t cross with him, but we thought he’d be the kind of person who could not only coach our team well, but have people want to play for him, because he’s a good, good man.

“It’s amazing how many of our players developed under him this year. We all want to win games, and yet he’s still throwing guys out there who maybe haven’t had such a good night, but he’s still coming back with them. Not many coaches have that sort of patience and trust and guts at this level. You either have the quality or you don’t. He does.”

In November of 2016, Gallant was fired by Florida just 22 games into his third season as coach and just a year after leading the Panthers to 103 points and Atlantic Division title.

Now, he stands above his peers as the game’s best.

Had the Knights won the Cup, he would have taken it to Summerside, where it would have spent some time on a golf course and atop a poker table — “It would have been a hell of a party,” Gallant said. Instead, he will take part in the team’s development camp next week and then return to his province’s second largest city until training camp beckons in a few months.

I’m also guessing grandson Dylan will be in line for some extra treats, given Gallant during his acceptance speech momentarily forgot the name of Caleb’s brother.

“I’ll never forget that name again,” Gallant said. “The (grandsons) were down here for six weeks recently, and I had the best time of my life. I was a little nervous up there, so I’m sure they’ll let me off.

“It’s not about redemption (from Florida). That’s part of our business. You get let go and you go somewhere else.”

Gallant dislikes beating his buddies in poker, so every now and then, he will fold a great hand.

But probably not the sort of royal flush the Knights landed in him.

I mean, nobody is that nice a guy.