OTTAWA, Ontario — Gerard Gallant was fired as coach of the Golden Knights on Wednesday morning. For such a seemingly rushed decision, be assured it wasn’t made in the previous 24 hours.

Nobody believes that management departed a 4-2 loss at Buffalo on Tuesday and immediately concluded it was best to dismiss the only coach in franchise history while already having his replacement in line.

This undoubtedly was in the works, just as president of hockey operations George McPhee undoubtedly made the final call.

He makes all calls.

Peter DeBoer is the new coach, and hide the children from an onslaught of expletives spewing from a majority of Knights fans. He’s the former coach of what has become a bitter rival in San Jose.

Ah, the five-minute major in Game 7. Such memories.

But how DeBoer will prove himself — he’s a terrific coach, by the way — is for another day. That the Knights will engage the Ottawa Senators on Thursday without Gallant is the revelation that stunned most of Las Vegas.

Examining how this came to pass isn’t easy, but there are enough clues to connect the needed dots.

Some even date to last season.

I don’t for a second believe Gallant was a victim of his own success. If so, management is delusional.

That he directed the Knights through a historic expansion run all the way to the Stanley Cup Final and then into the playoffs last season shouldn’t have precipitated Gallant being bounced midway through his third year, even after the team’s fourth straight loss.

No matter how much the Knights have underachieved this season.

Bill Foley is an owner who covets winning, and the Army in him presents an incredibly high bar for success that he expects others to reach. I assume he had to sign off on the firing. He also wasn’t going to deny McPhee.

I also don’t buy Gallant lost the room. Teams that have stopped playing for a coach don’t rally from 3-0 down to beat the Stanley Cup champion St. Louis Blues less than two weeks ago. Most players love Gallant. They’re not good enough actors to think their consistent praise was not truthful.

“As a manager, sometimes you have a feeling that something isn’t what it needed to be,” general manager Kelly McCrimmon said. “Sometimes, you feel a change is needed.”

Whispers are often all that’s available in and around NHL teams, easily the most paranoid of major league professional sports when it comes to internal issues.

It was common knowledge during a downturn last season that serious tension built between McPhee and Gallant. One would circumvent the other and vice versa.

Perhaps it was about Gallant’s reluctance to totally embrace the analytics world McPhee and his scouts rely heavily on when making personnel moves.

There is no maybe to this: McPhee-Gallant was hardly a perfect marriage.

It’s not Gallant’s fault that the Knights have failed to improve their blue line the past two seasons, or that they are suddenly staring into an inferno of salary cap hell. Foley allowed McPhee to spend big on long-term deals for several players while moving others, all of which remains open for debate.

The Knights are struggling at ninth in points percentage among Western Conference teams. William Karlsson. Alex Tuch. Nate Schmidt. Marc-Andre Fleury. All are underperforming, some ridiculously so. Injuries also haven’t helped and caused lines to be mixed.

But an epidemic of slow starts lately didn’t aid Gallant. That never looks good on a coach. It’s a trend that questions a team’s readiness to compete.

Advanced statistics suggest the Knights should be better than fifth in the NHL’s worst division, and yet Vegas is also just three points out of first in the Pacific.

But while I wouldn’t term Gallant’s firing desperate, it was rushed and, well, still calculated. McPhee thinks the roster he built is better than 24-19-6 and that DeBoer can prove it. McPhee probably thought it for a while now. This was no 24-hour judgment.

Two years ago, Gallant won the Jack Adams Award for Coach of the Year.

Today, he is fired.

Just don’t think for a second he was entirely responsible for such a change.

McPhee needs to own much of this.

But this is also pro sports, Las Vegas, and when things aren’t going as the man in charge desires, someone pays the price.

Most often, the coach. 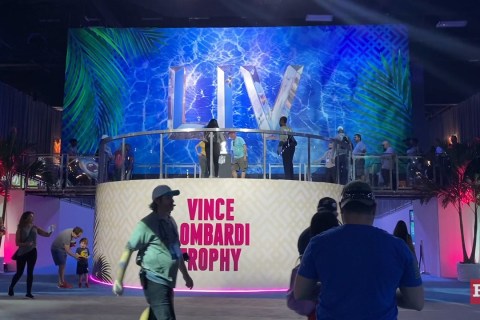