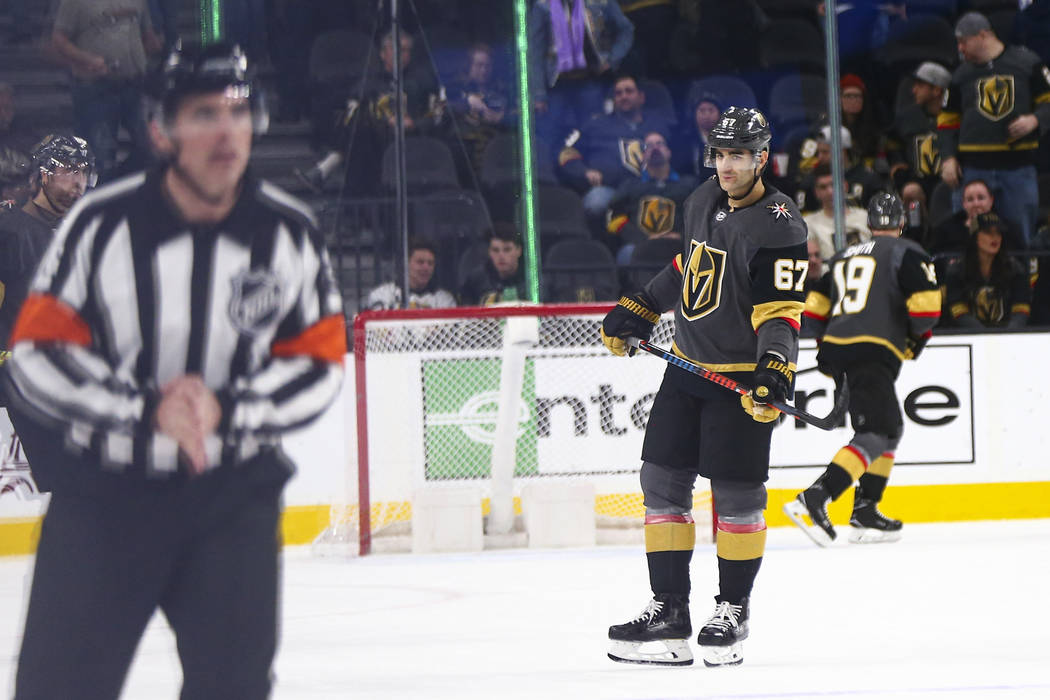 Golden Knights' Max Pacioretty (67) looks on after a 3-0 loss to the Columbus Blue Jackets in an NHL hockey game at T-Mobile Arena in Las Vegas on Saturday, Jan. 11, 2020. (Chase Stevens/Las Vegas Review-Journal) @csstevensphoto

So, this is what Gerard Gallant means by skating in sand.

Gallant identified a lack of his hockey team moving its feet when explaining forgettable starts lately, something the Golden Knights tried like anything to avoid against Columbus on Saturday night.

It wasn’t a disastrous beginning. It just wasn’t very good, an opening 20 minutes that was eventually followed by a 3-0 loss to end a seven-game homestand.

How what has become a pivotal time on ice transpired in the final game Vegas will play here until Feb. 8:

It wasn’t 3-0 after one period — or, hello, last-place Kings — a ridiculous 4-0, but the Knights still found themselves trailing again at T-Mobile Arena.

“It felt like it was going to come (early),” Knights defenseman Nate Schmidt said. “We had some chances in (the first period). I thought we were moving pretty well. But you have to keep battling through.”

Look at it this way — the Knights have been outscored 10-0 in the first period of their past four games, when they have done more chasing than investors do the market.

But this also wasn’t St. Louis or Pittsburgh, so a 1-0 deficit had as much to do with the Blue Jackets as anything else.

(Yeah, I know, that still doesn’t explain being boat-raced by the Kings early.)

Columbus assumes the personality of its coach about as well as any NHL team, and given John Tortorella is a few quarters short of a buck, its grinding, defensive-minded, lock-things-down, don’t-give-an-inch persona is ideal for how the team competes.

The Blue Jackets are simple. They keep forwards to the outside. They don’t allow inside chances. They block shots.

They’re an airport security line, frustrating as all heck to face.

They also have 52 points this season.

Tortorella is coaching his brains out.

Shoddy play in net was a primary reason for the Knights playing so poorly in the first period the previous three games. Marc-Andre Fleury and Malcolm Subban left their A games at home and barely settled for Cs.

Fleury stopped all but one of 13 shots in the first, and that was a power-play one-timer from Emil Bemstrom at 16:38.

But nothing like taking penalties can mess with flow. The Knights outshot Columbus 6-1 to start. They just couldn’t solve Columbus goalie Elvis Merzlikins, but were certainly the aggressors once the puck dropped.

And then Paul Stastny went off for slashing at 11:45, and solid play from Fleury kept it scoreless.

And then Jon Merrill went off for interference at 14:57, and Fleury never saw Bemstrom’s rocket from the left circle.

The two penalties on Vegas shifted things, and Columbus outshot the Knights 13-1 in the final 12 minutes.

The place also went dead, as the league’s best atmosphere for fans suddenly resembled the Summerlin Library for hushed tones. I suppose you can’t boo when you’re asleep.

How solemn did things become and continue as the Knights skated off down 1-0?

Usually, the arena announcer will begin a fan interaction by bellowing, “May I have you attention please!” to get folks riled up. It always occurs during the third period.

On Saturday, they ran it with 9:55 left in the second.

“I thought we had a good start,” forward Mark Stone said. “We had a power play (at 4:33 of the first) and got a few good looks. But we couldn’t kill off their second penalty, and they got a little momentum and it went from there.”

You know how bad things have been when multiple players laud a first period that saw them outshot and outscored.

Gallant agreed. To a point.

“I thought we came out good those first five, six minutes,” Gallant said. “But (Columbus) worked their tails off tonight, and we didn’t play hard enough. I didn’t like the way there was no contact. I think the crowd sarcastically cheered when Shea Theodore threw a hit with six minutes left, and I don’t blame them. It was a soft game, and we’ve got to play harder than that.”

They still have to play much better to start games, whether it’s against someone as good as St. Louis or as bad as the Kings or as simple as the Blue Jackets.

And right now, the Knights are failing at it.