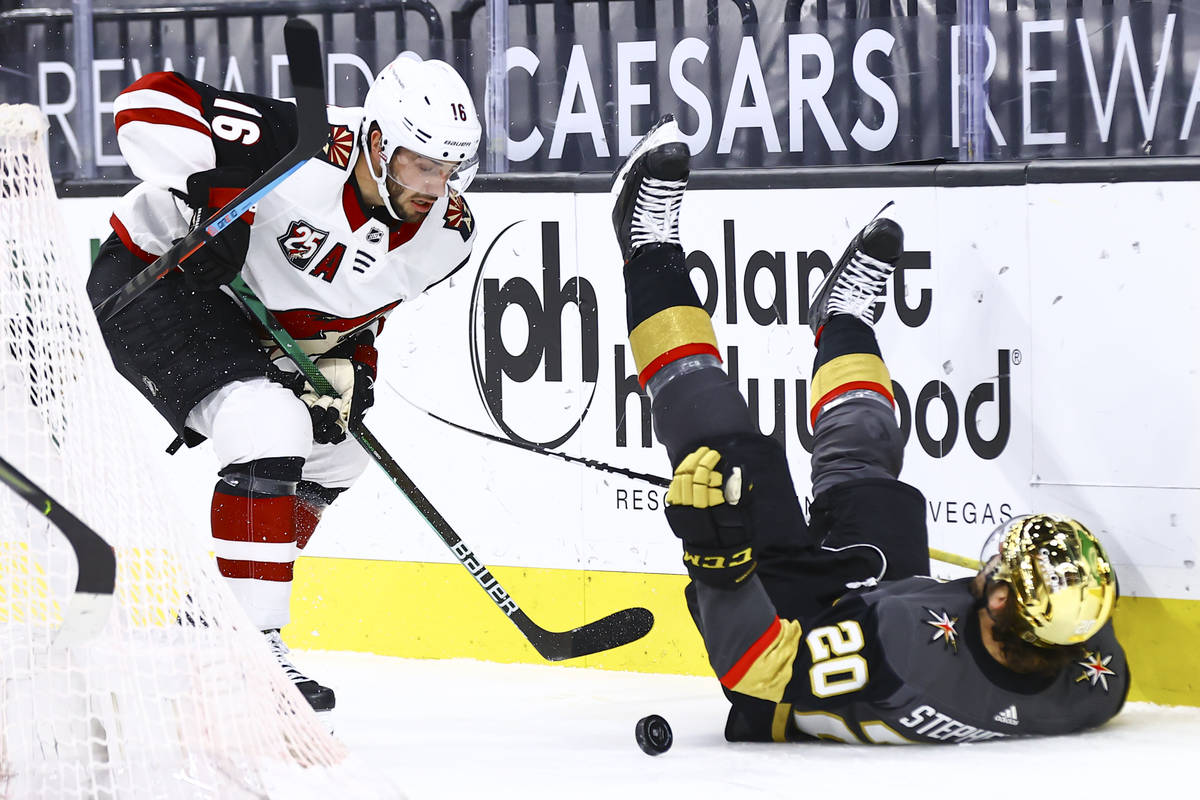 Golden Knights' Chandler Stephenson (20) gets tripped up as Arizona Coyotes' Derick Brassard (16) skates with the puck during the second period of an NHL hockey game at T-Mobile Arena in Las Vegas on Sunday, April 11, 2021. (Chase Stevens/Las Vegas Review-Journal) @csstevensphoto 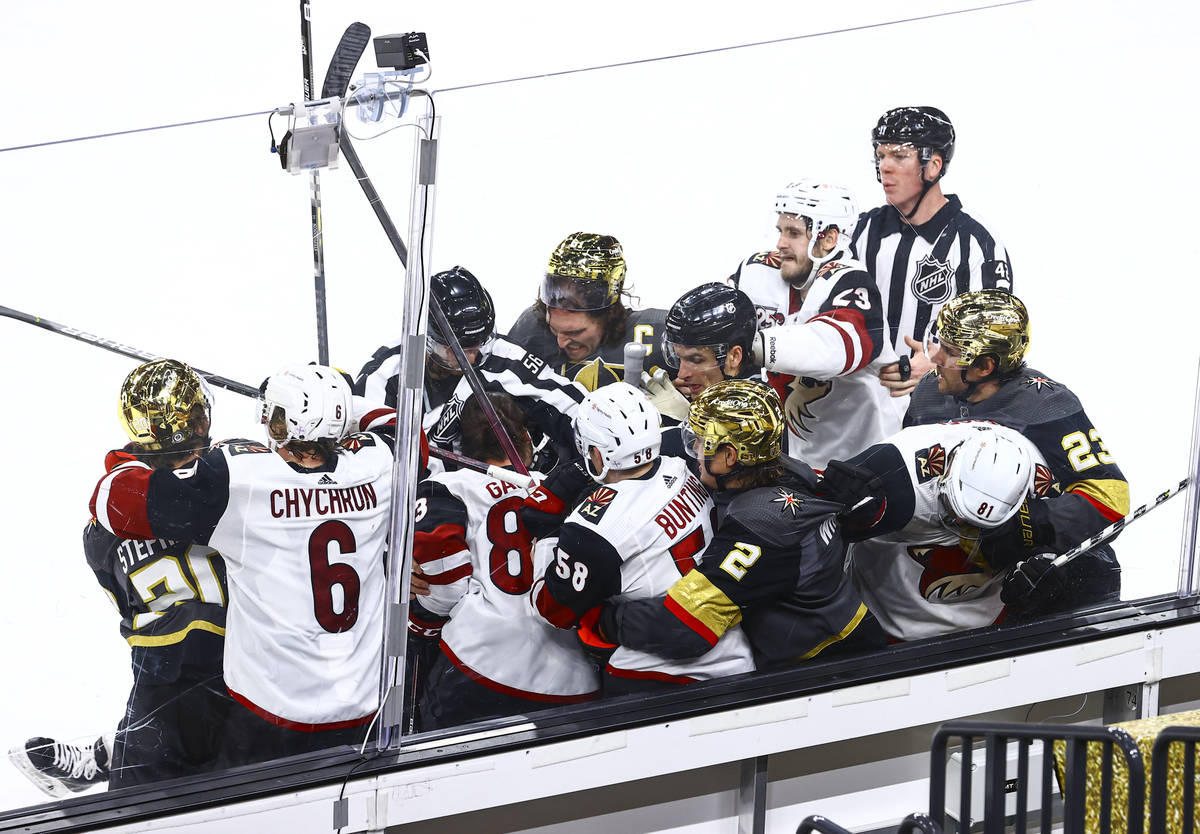 The Golden Knights get into an altercation with the Arizona Coyotes during the third period of an NHL hockey game at T-Mobile Arena in Las Vegas on Sunday, April 11, 2021. (Chase Stevens/Las Vegas Review-Journal) @csstevensphoto 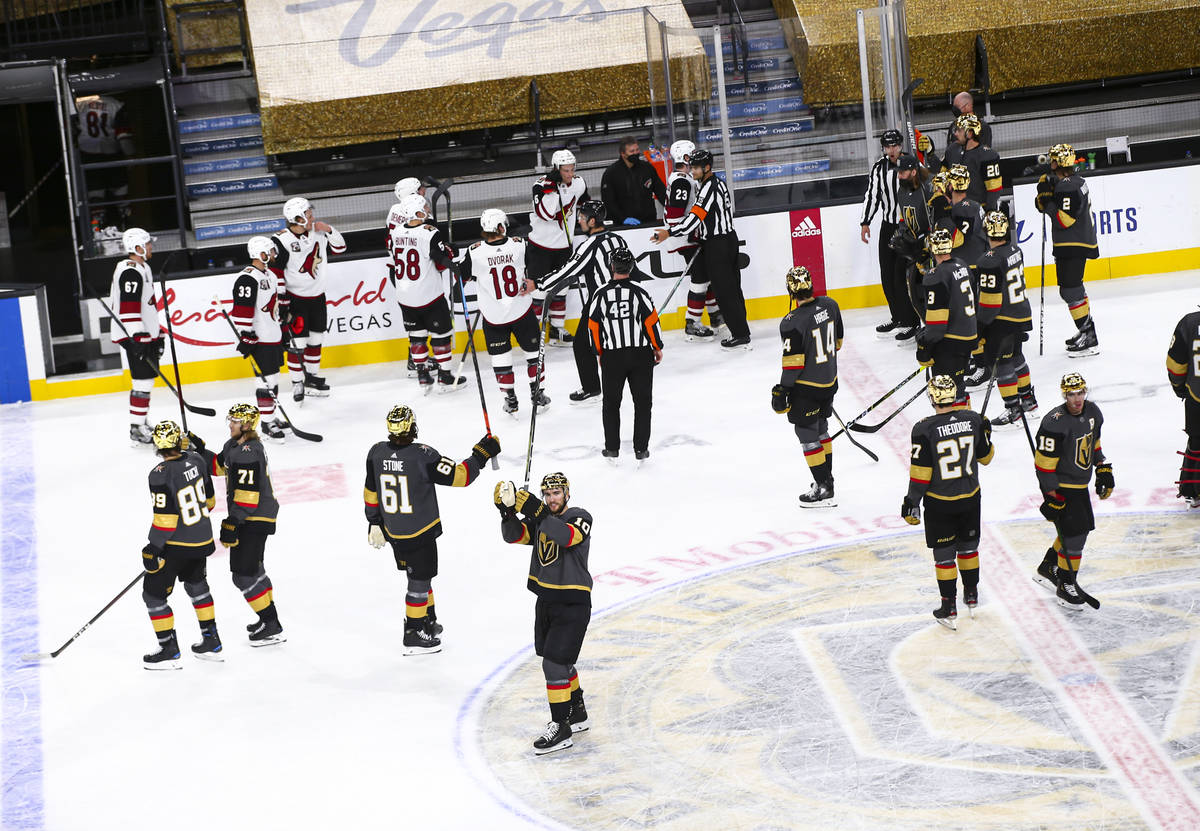 The Golden Knights celebrate after a shutout win over the Arizona Coyotes in an NHL hockey game at T-Mobile Arena in Las Vegas on Sunday, April 11, 2021. (Chase Stevens/Las Vegas Review-Journal) @csstevensphoto

Well, it hardly compared to a friendly Sunday stroll around Augusta National.

Hockey fights mostly resemble more clutching sweaters than landing punches. Much ado about nothing. But that doesn’t mean three periods of bad blood is necessarily boring. Just the opposite.

The Golden Knights defeated Arizona 1-0 before 3,950 at T-Mobile Arena, and all you need to know about how things went is what occurred after the final horn.

Neither team departed, instead congregating for a group staredown while continuing to chirp unpleasantries.

I’m guessing it wasn’t about how nobody caught Hideki Matsuyama at the Masters.

You knew a response from the Coyotes was coming. The Knights toyed with them in a 7-4 win Friday. It was 5-0 at one point. Sort of ridiculous. Arizona goaltender Adin Hill wanted to whack his defensemen more than clear pucks.

So the fact that things got all sorts of physical Sunday was expected. Arizona is a desperate team trying to secure the fourth and final playoff spot in the Honda Division. It was going to push out of its skates in this one.

How to combat such aggression? Respond as the Knights did.

They push. You push back.

“That’s the game we want to play,” Knights defenseman Shea Theodore said. “We’re a physical group. That’s when we’re at our best, when guys are engaged like that. That’s pretty much all I have to say about it.”

Things got ornery fast. Knights forward Ryan Reaves leveled Arizona defenseman Jordan Gross to the ice at 12:35 of the first period with a shoulder to the head. Gross needed to be helped off and didn’t return because of a lower body injury.

Which made sense, given Reaves also collided knees with Gross. Either that, or someone with the Coyotes failed high school anatomy and isn’t sure where the cranium is.

A penalty wasn’t assessed, but be assured the NHL’s Department of Player Safety will take a look at the play. It’s a tough one to gauge. Reaves undoubtedly went high but wasn’t necessarily late. Gross had just released the puck when the collision occurred. A hit to the head area doesn’t automatically result in discipline. Nothing might come of it.

“We’ve seen (the hit) now,” Arizona coach Rick Tocchet said. “We all know. You don’t have to be a hockey guy to know what the hit is. I’m not going to say it. We’ll see what happens.”

It was the beginning of things to come, tempers on both sides rising in the pursuit of two points.

Ironically, the game’s only goal came by way of such spiritual play.

Tomas Nosek scored at 10:38 of the third period off a pass from Jonathan Marchessault, but it was set up by a nasty forecheck in the corner from Max Pacioretty on Jakob Chychrun.

This came shortly after Pacioretty was slammed into the boards by Jason Demers.

Which was followed by Mark Stone of the Knights dumping Demers to the ice.

Which was eventually followed by Conor Garland upending Stone with 14 seconds remaining.

Which was followed by the center ice staredown.

“We knew they would push,” DeBoer said. “They’re within a point of being in or out of the playoffs. I thought our desperation matched theirs. We played with some grit when we needed to and some skill when we needed to. We stayed out of the penalty box and kept it to a five-on five game, which is what we wanted to do.

“It was a good afternoon.”

Definitely not your friendly Sunday stroll.