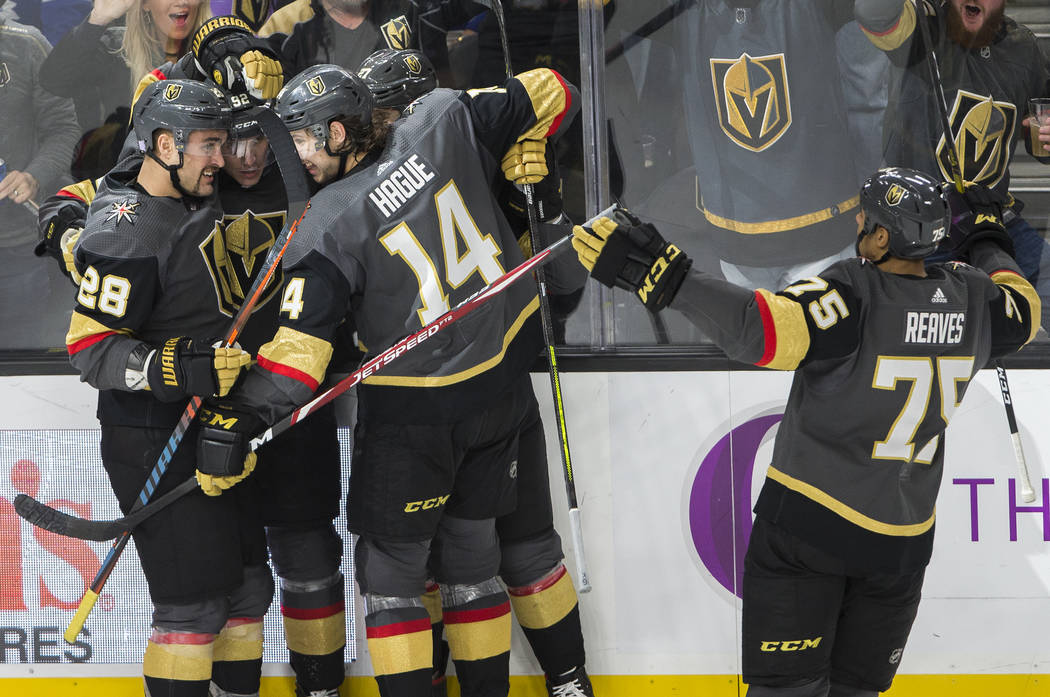 On a night during which Marc-Andre Fleury even outdid his own storied hockey career — how in the world did he make that save? — a rookie defenseman for the Golden Knights continued his slow but sure progression on the bright lights of an NHL stage.

This is where Nic Hague believes he belongs, among the world’s best.

The Knights certainly have one in their goalie.

Five straight losses have been followed by two consecutive wins, and the biggest moment of a 4-2 victory against the Toronto Maple Leafs on Tuesday night undoubtedly came with 3:43 remaining in a one-goal game.

Fleury’s dive across the crease to snag a shot from Nic Petan — a patient, outstretched, skillful glove plucking a puck streaming through air — allowed the Knights to maintain the lead and eventually finish the Maple Leafs.

“(Fleury) is pretty incredible,” Knights coach Gerard Gallant said. “When he makes a save like that — as a coach, you come to expect it from him. I thought it was a goal. I was getting the next line ready to go. I actually didn’t see the save until after the game. But that’s Marc. He never gives up. He battles. A huge save at a huge time.”

Hague wasn’t huge but again steady, the 21-year-old blue liner getting better and better with his decision-making and passing.

He also was back on the same line with Shea Theodore, this just Hague’s 15th NHL game, not near the player Vegas expects him to be in time, meaning he’s at that stage of worrying first about making the right play before the great one.

The maturation process for a defenseman is far more detailed than others. Everyone wants forwards who can play a 200-foot game, but they’re basically about attacking and scoring. You know what you have in them a lot sooner than those on defense.

You also can see signs of why the Knights are so high on the 6-foot-6-inch Hague, whose overall Corsi (55.3) is even better when he’s paired with Theodore (57.7).

Confidence is everything for a young NHL defenseman.

“There is definitely an adjustment period that I went through and am going through,” said Hague, who has three assists this season and has played to a plus-3. “It’s the same game up here in some ways as other levels like the AHL, but it’s a lot faster and quicker in other ways.

“For me, I just want to take care of my own end first and make sure I’m solid defensively. The more games I play, I think I’m making progress and getting better. That’s the mindset. It’s so early into my NHL career. Be a sponge and learn every night and every day in practice and get better.”

Hague has spent parts of this season shuttled along with others between Las Vegas and Chicago of the American Hockey League, a way to manipulate the salary cap and have as much usable space as possible when the trade deadline arrives.

It’s a safer bet than not the Knights aren’t totally set on the idea that theirs is a defense totally capable of a deep playoff push. They obviously missed Nate Schmidt for the 13 games he was out with injury, and it’s not a stretch to suggest they could use more speed along the blue line.

What that means for a player such as Hague — drafted 34th overall by the Knights in 2017 — is anyone’s guess, and it’s certainly not something he should focus on.

But on nights such as Tuesday, he merely becomes one of many watching as one of the best to ever wear a goalie mask again makes the sort of save that logic says shouldn’t be possible for a guy who turns 35 on Thanksgiving.

This is what Hague covets, the opportunity to exist and prove himself on the brightest stage.

“It takes a long time to figure of how to discover what type of player you are,” Schmidt said. “It’s amazing how much I have changed as a player over the years, and (Hague) is going to change. His game is going to evolve.

“The progression comes in chunks, so right now he should just worry about being really good at what he’s doing. Be really good when you get the chance.”

Most of the Knights, including Hague, were that Tuesday.

The guy in goal?