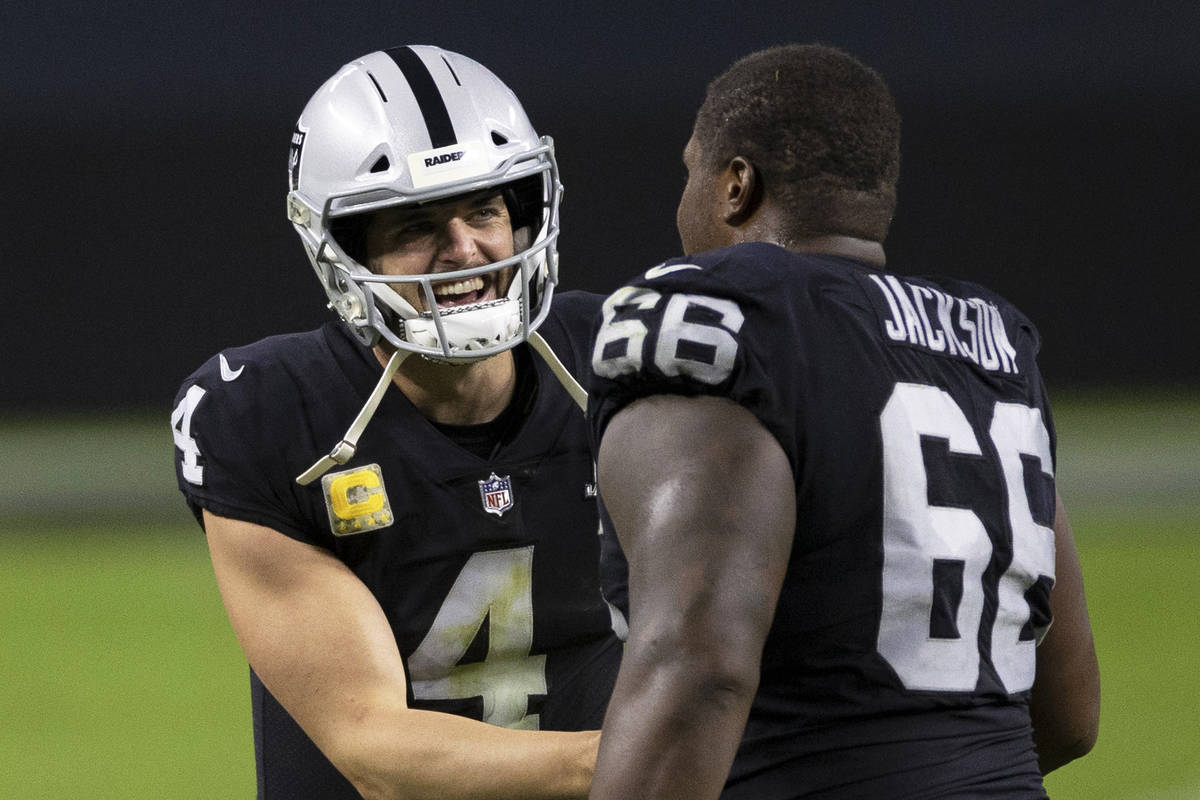 This was easily one of Derek Carr’s best games as quarterback of the Raiders. He completed his first 11 passes and finished 23-of-31 for 275 yards with three touchdowns and one interception. The Raiders averaged 6.4 yards on just 57 plays. Carr targeted 11 receivers and they all had at least one catch. Darren Waller (7 for 88 with a score) and Nelson Agholor (6-88, score) led the way. For the first time in four games, the Raiders weren’t able to control the clock. They possessed the ball for just 27:55 compared to 32:05 for the Chiefs. Josh Jacobs carried 17 times for 55 yards and a score. Truth is, when your defense is this accommodating to an opponent like Kansas City, you have to play near-perfect offense. The Raiders were good, but not flawless.

The only thing keeping this from an “F” was the interception from cornerback Trayvon Mullen near the end of the first half that denied Kansas City points. It’s true that several regulars missed a week of practice while on the COVID-19 list and it showed. The Raiders allowed scoring drives of 14, 7, 16, 12 and 7 plays. They just couldn’t get off the field all night. Patrick Mahomes finished 34-of-45 for 348 yards with two scores and an interception. Tight end Travis Kelce (eight catches, 127 yards, game-winning score) and Tyreek Hill (11-102, score) burned the Raiders time and again. Johnathan Abram had a team-best seven tackles, and linebacker Nick Kwiatkoski added six. Neither team recorded a sack.

This has fast become the team’s most consistent unit. It rarely makes mistakes. Daniel Carlson was perfect on all four extra point and added a 35-yard field goal.

It was one of the better called offensive games in some time. Jon Gruden’s attack found a nice rhythm early. But did you know Gruden has been successful on just 19 percent of his challenges since returning as head coach? He lost another Sunday on what was ruled a catch during Kansas City’s scoring drive to open the second half. The Raiders also lost 15 yards on an unsportsmanlike conduct call against their coaches when they left the sideline box to argue a non-call, which didn’t allow Gruden to at least contemplate going for it on fourth-and-goal from the 1. His team was too sloppy for such a back-and-forth contest, penalized eight times for 72 yards. The defensive staff couldn’t dial up much of anything during those long Kansas City scoring drives, including a game-winning push that was far too easy for the visitors.