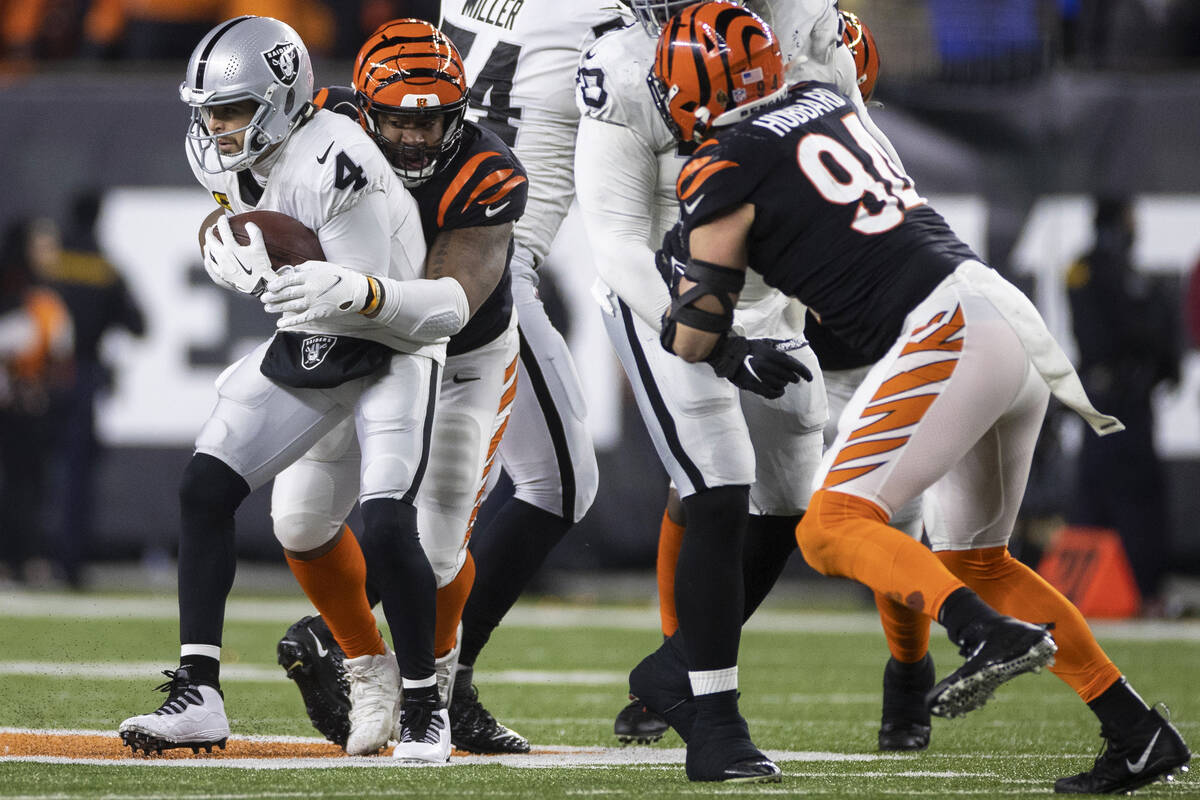 How the Raiders performed in a 26-19 loss to the Bengals.

It was a dreadful performance from the big guys up front. On one third-quarter drive, the line had three holding calls on three different players. It ended as most did in the red zone — with a field goal. False starts. Allowing quarterback Derek Carr to be sacked three times. That retooled line suffered through a forgettable day. The Raiders were 1-of-5 in the red zone and 1-of-6 when advancing inside the 30-yard line. In his first playoff game, Carr completed 29-of-54 passes for 310 yards with one score and an interception on his final throw of the game. Josh Jacobs ran for 83 yards and caught four passes for 44 more.

Bottom line — this side got the stop it needed late in the fourth quarter and gave the offense a chance to drive and tie the game. But the Raiders only forced two punts all afternoon. Bengals quarterback Joe Burrow was a more-than-efficient 24-of-34 for 244 yards with two scores and a rating of 110.4. Defensive end Maxx Crosby had six tackles, a sack and two quarterback hits. Linebacker Denzel Perryman added a team-best nine tackles. Defensive tackle Quinton Jefferson added a sack. Linebacker Divine Deablo had eight tackles.

It’s true Daniel Carlson was again money, making field goals from 47, 28, 34 and 28 yards. But you can’t have the type of mistake made by Peyton Barber — catching a kickoff at the 2-yard line and then going out of bounds — in a playoff game. The Bengals held and then followed with a scoring drive and field goal to make it 13-3 with five minute gone in the second quarter.

They made the playoffs. Wasn’t that the stated goal from management all along? Rich Bisaccia as the interim head coach inherited an off-field culture of drama and legal issues that could have swallowed the season whole. But he kept things together for a team that believed in him. Not sure if he gets the full-time job, but it won’t be because he didn’t do a good enough job to earn it.