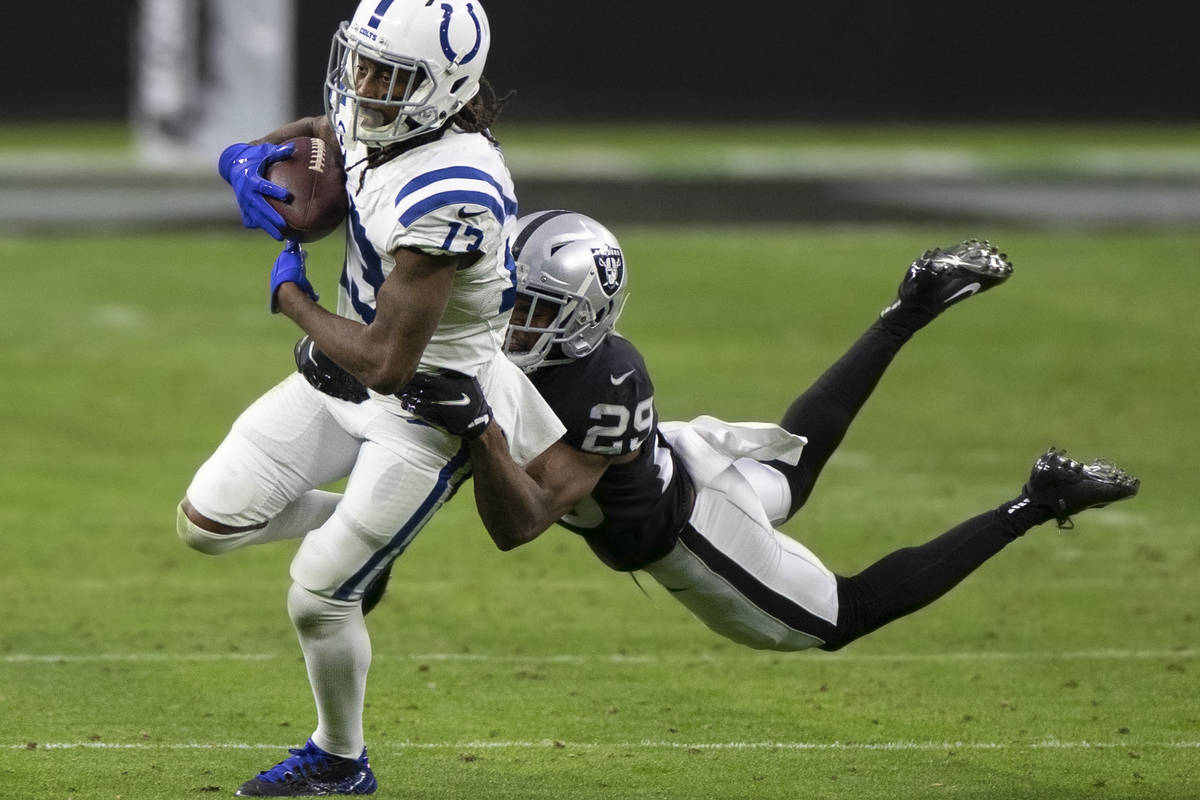 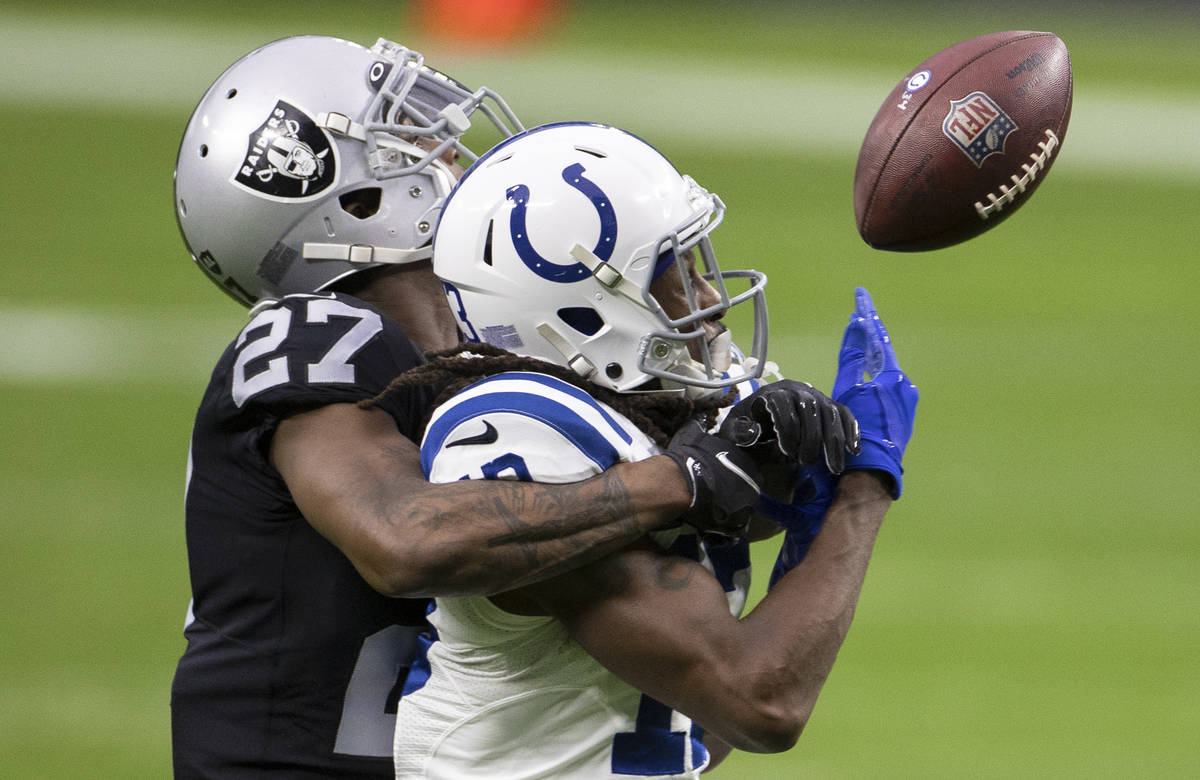 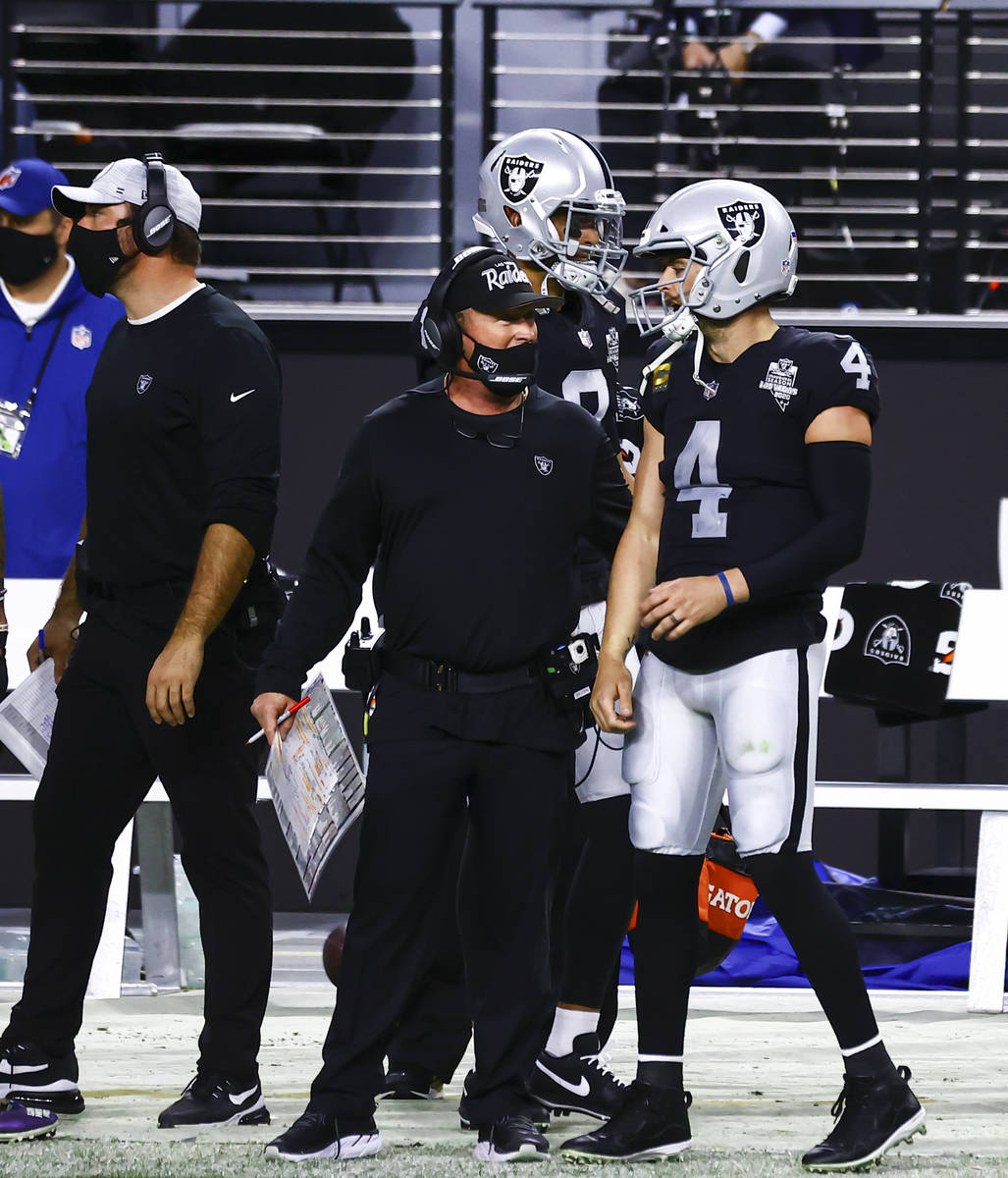 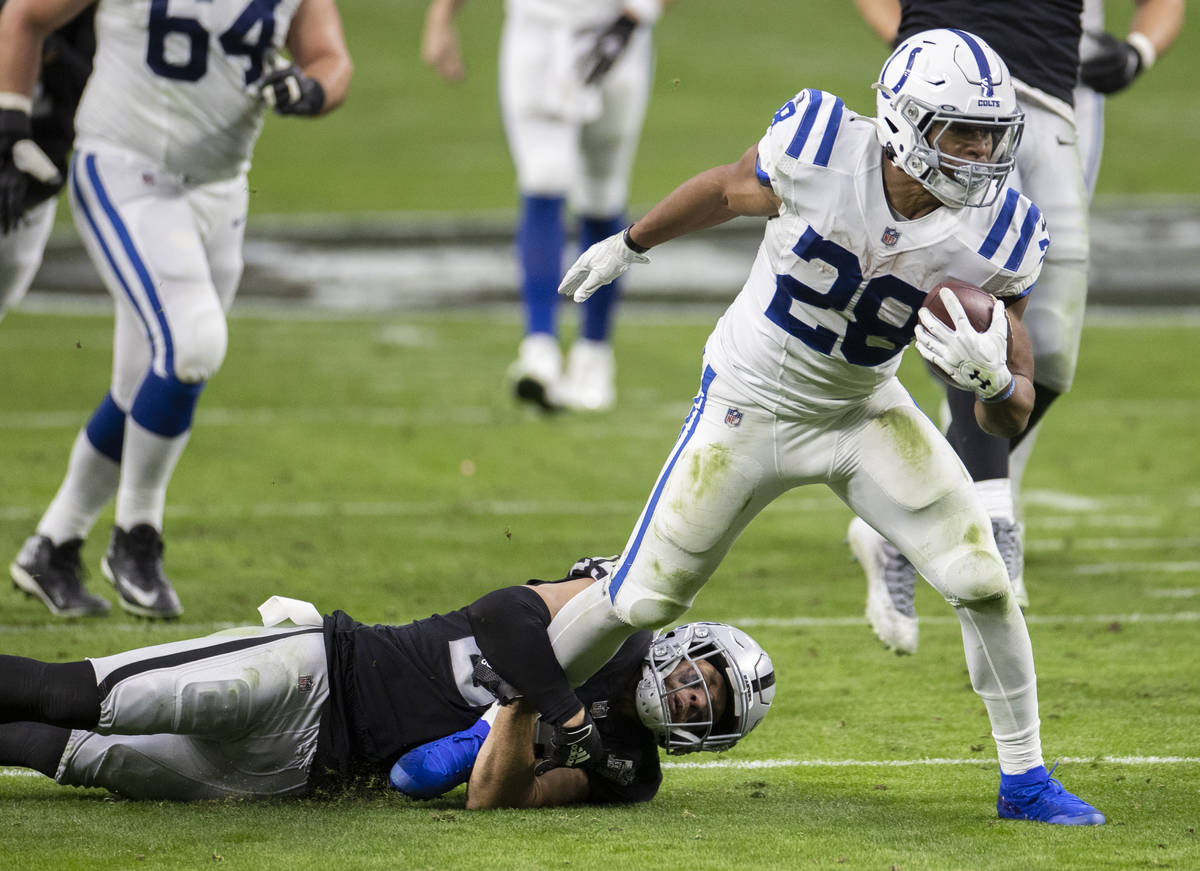 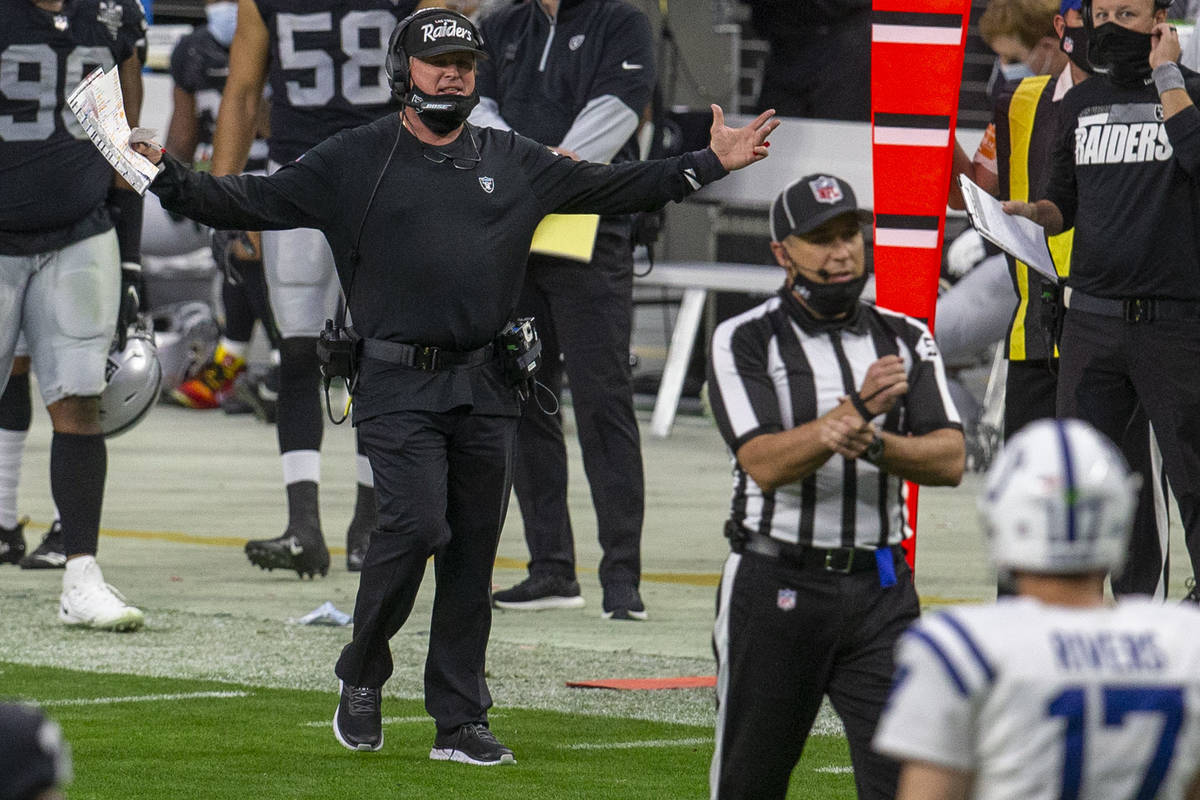 Raiders head coach Jon Gruden gestures towards the field as a penalty is called against his team during the second quarter of an NFL football game against the Indianapolis Colts on Sunday, Dec. 13, 2020, at Allegiant Stadium in Las Vegas. (Heidi Fang/Las Vegas Review-Journal) @Heidi Fang 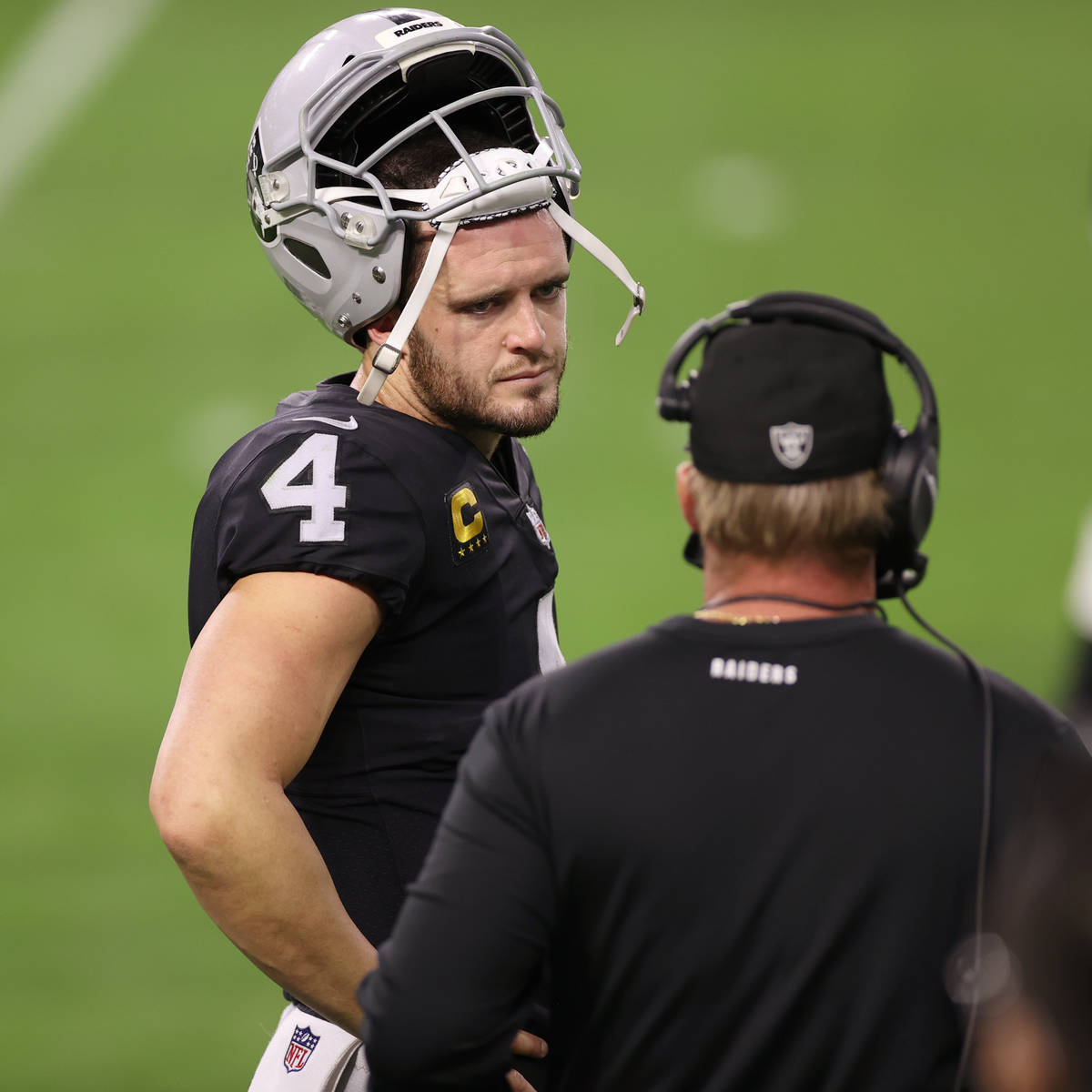 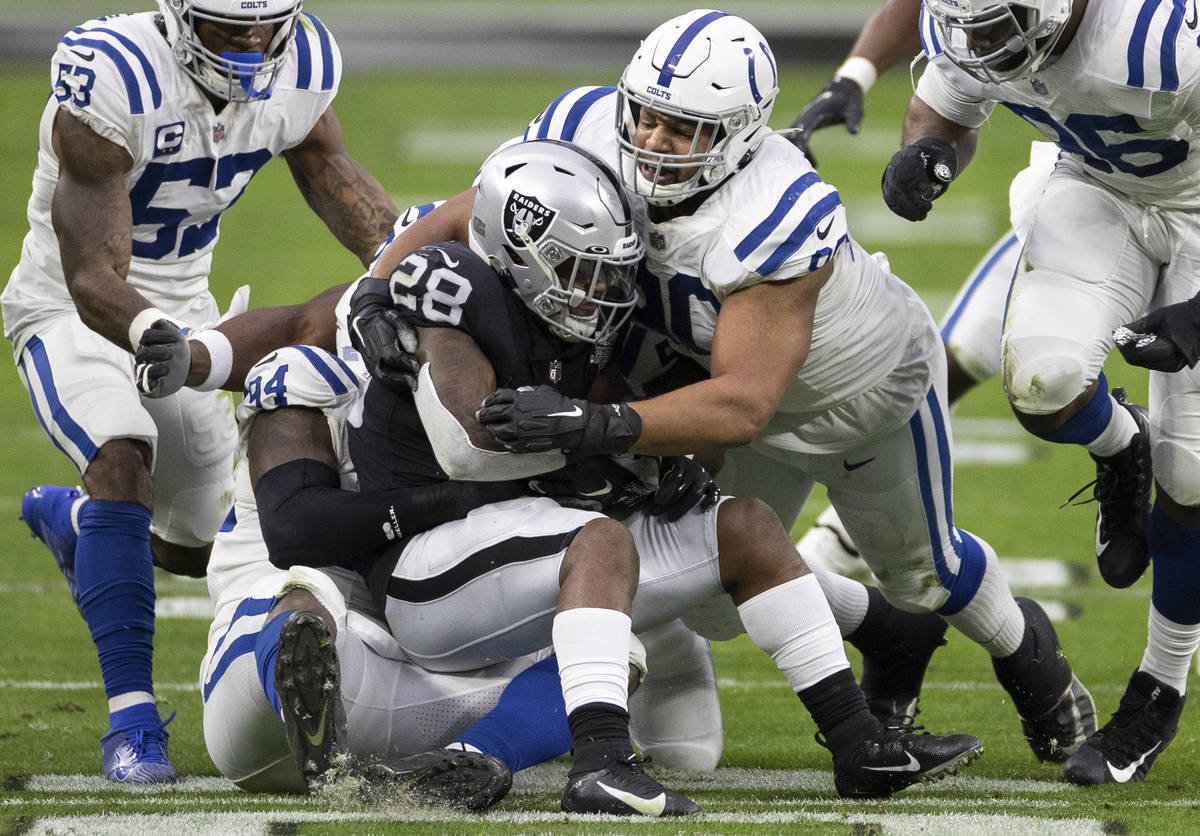 Things started out well. Then the Raiders couldn’t finish in the red zone with touchdowns. Then things just got silly with turnovers, the last a pick-6 of quarterback Derek Carr by the Colts. Carr completed 31 of 45 for 316 yards with two scores and two interceptions, but answering touchdowns with field goals isn’t getting it done when your defense is this bad. Carr also ran for a 5-yard score. But the Raiders couldn’t run much at all. Josh Jacobs returned to the lineup after missing last week with an injured ankle but managed just 49 yards on 13 carries. Carr’s touchdowns went to tight end Foster Moreau from 47 yards and wide receiver Nelson Agholor from 21 yards. Because the defense played so poorly, “you get to the point where you’re second-guessing everything you’re doing offensively,” Raiders coach Jon Gruden said. “It’s tough right now. But you have to stay confident that your (defensive) players are going to put it together.”

The Raiders never did get to ol’ man Philip Rivers, who finished 19 of 28 for 244 yards and two touchdowns for the Colts. Whether it was bad angles by players such as Johnathan Abram that led to long touchdown passes or others by Erik Harris that led to long runs, the Raiders were out of sorts on this side yet again. They had more ill-advised penalties — see the hold by Trayvon Mullen on a third-and-15 for the Colts from their 15 — and never could get much of a handle on running back Jonathan Taylor (20 carries, 150 yards, two scores). Eight players caught passes for the Colts, led by T.Y. Hilton (5-86-2). “When you make it a one possession game, you have to trust your defense,” Gruden said. “To be a championship team, you have to be a good football team in all three phases.”

Not much to speak of here. Daniel Carlson was perfect on two field-goal attempts, making good from 25 and 23 yards. He’s 26 of 28 on the season.

One sign of good coaching is whether a team improves during the season. Consider: In his last six NFL seasons (three with Tampa Bay and three with the Raiders), Gruden is 10-24 from Week 12 on (if you count a wild-card playoff loss in 2007) and has had no winning records in those six-game stretches to end seasons. Those records are 1-5, 2-4, 2-4, 3-3, 1-5 and 1-2 this season. Also, since winning the Super Bowl in 2002, Gruden’s teams are 17 games below .500 and have no playoff wins in nine seasons. Defensive coordinator Paul Guenther was fired after the loss, meaning defensive line coach Rod Marinelli will step into the lead role for the rest of the season.