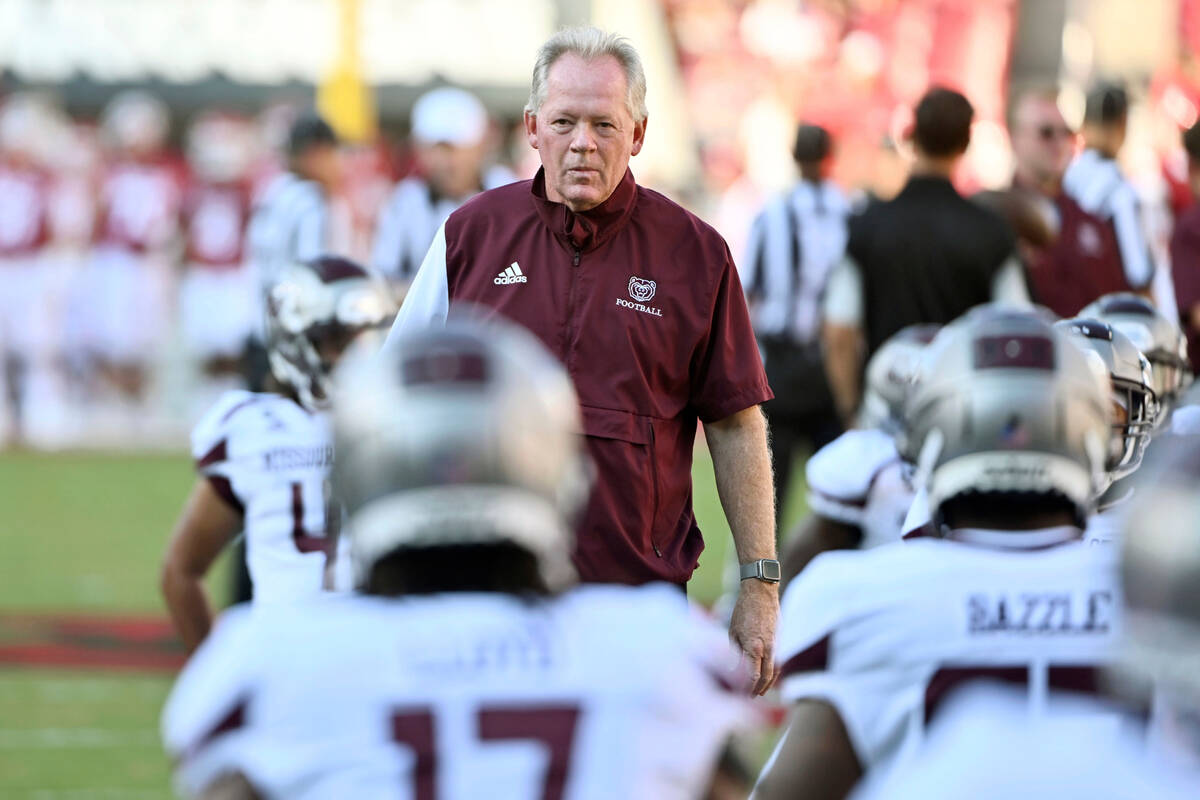 Missouri State coach Bobby Petrino watches his team warm up before playing Arkansas before an NCAA college football game on Sept. 17, 2022, in Fayetteville, Ark. Petrino, known for his high-powered offenses and messy departures, will be UNLV's new offensive coordinator, according to a source with knowledge of the impending hire. (AP Photo/Michael Woods, File)

Well, we know this much: Barry Odom isn’t messing around.

The new UNLV football coach proved as much this past week when hiring Bobby Petrino as offensive coordinator, bringing to Las Vegas one of the game’s most innovative minds and accomplished play-callers.

And also a guy with some baggage.

But understand this: For the first time in a minute, UNLV is absolutely serious about winning football games. That’s mostly what Petrino has done, having compiled a 119-56 record as a Football Bowl Subdivision coach.

Not the coaching part. He’s terrific at that. For everything else.

You know the story: Petrino was fired as the Arkansas coach in 2012 after he lied about a motorcycle accident in which he was riding with a female football staffer. He was having an affair with the woman and had failed to disclose the relationship when adding her to his staff. Lied to everyone about it.

The jokes locally have begun. The social media posts of motorcycles and that infamous picture of Petrino after the accident — the one with him in a neck brace and his face all scratched and cut up — have made the rounds.

UNLV had to know there would be criticism of the hire. That some would consider bringing aboard a coach whose character has been questioned at more than one of several stops an error in judgment.

The latter of which has nothing to do with this particular job.

It’s worth it. UNLV couldn’t afford not to hire Bobby Petrino. The upside is too great.

This is UNLV. It hasn’t won in forever. There is no pitfall to naming Petrino as coordinator. He’s not running the program. He’s doesn’t have final say. The only drawback might be if he bolts early on his commitment.

He did so with the Atlanta Falcons for Arkansas after 13 games into his first season as an NFL coach and promptly alerted players of his plans via a letter left in their lockers. Not the most respected of exits.

So given some of his missteps as a head coach, there is every reason to believe he might fit best right now at the FBS level in an assistant’s role. At, yes, a program such as UNLV.

“He’s an offensive wizard,” said Tim Sullivan, a former sports columnist at the Louisville Courier-Journal who covered Petrino’s second stint as the Cardinals’ coach. “If you leave him to play-calling and play design, he can be really effective. He didn’t do well with the human side of football, but he’s great with Xs and Os.

“Toward the end (at Louisville), there was a feeling that this was a guy you wanted designing plays but not one in command. Being an (offensive coordinator) is probably what he does best and allows him to avoid aspects of the job he wasn’t very good at as a (head coach).”

That’s all Odom should desire. That’s all the Rebels need from Petrino.

The happiest person about the hire might not be Odom but instead his quarterback. When healthy, Doug Brumfield this season was one of the Mountain West’s best talents.

Having committed to staying at UNLV, Brumfield will now learn from the coach who helped guide Lamar Jackson to a Heisman Trophy.

There are warts to Petrino’s resume — and a ton of success — for sure.

But in the sense of why Odom brought him to Las Vegas, this is about staying in one’s lane, head down and focused on the task at hand.

If he does that, Petrino’s gifts as a coach could afford the Rebels an offense not seen here in some time. Perhaps ever.

It’s more than worth it.