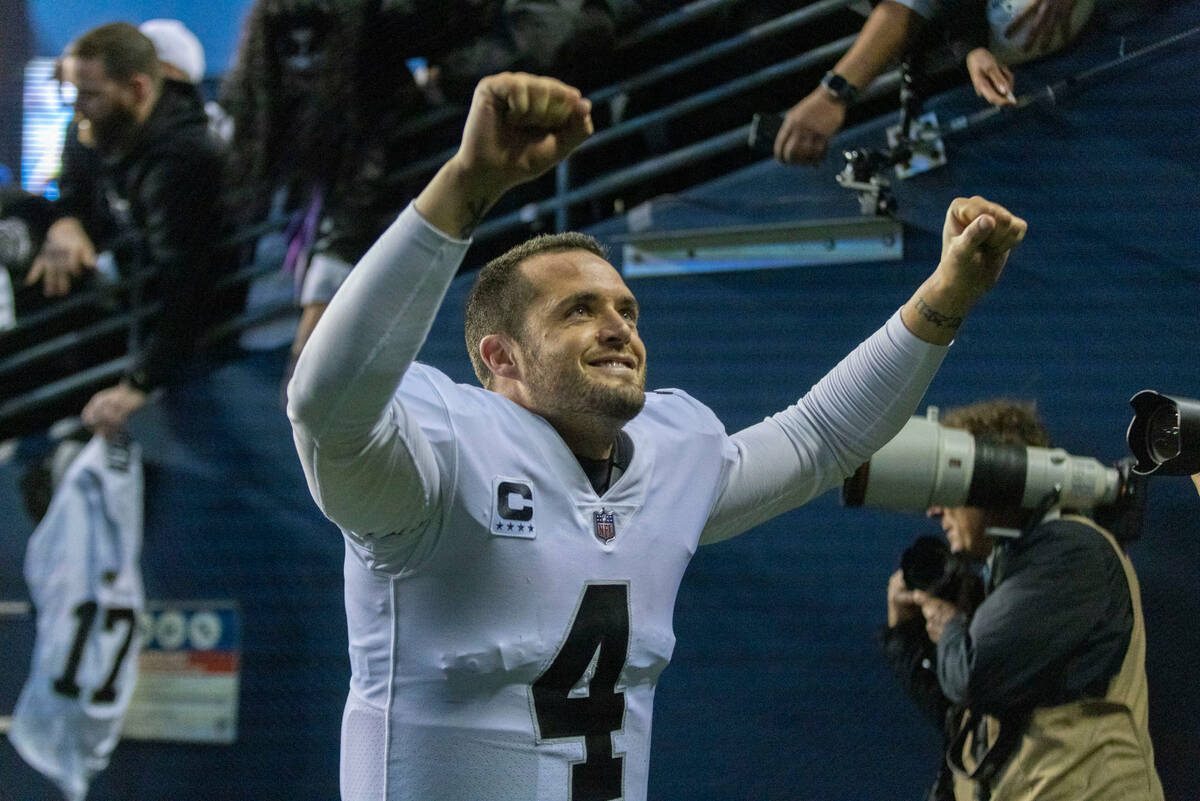 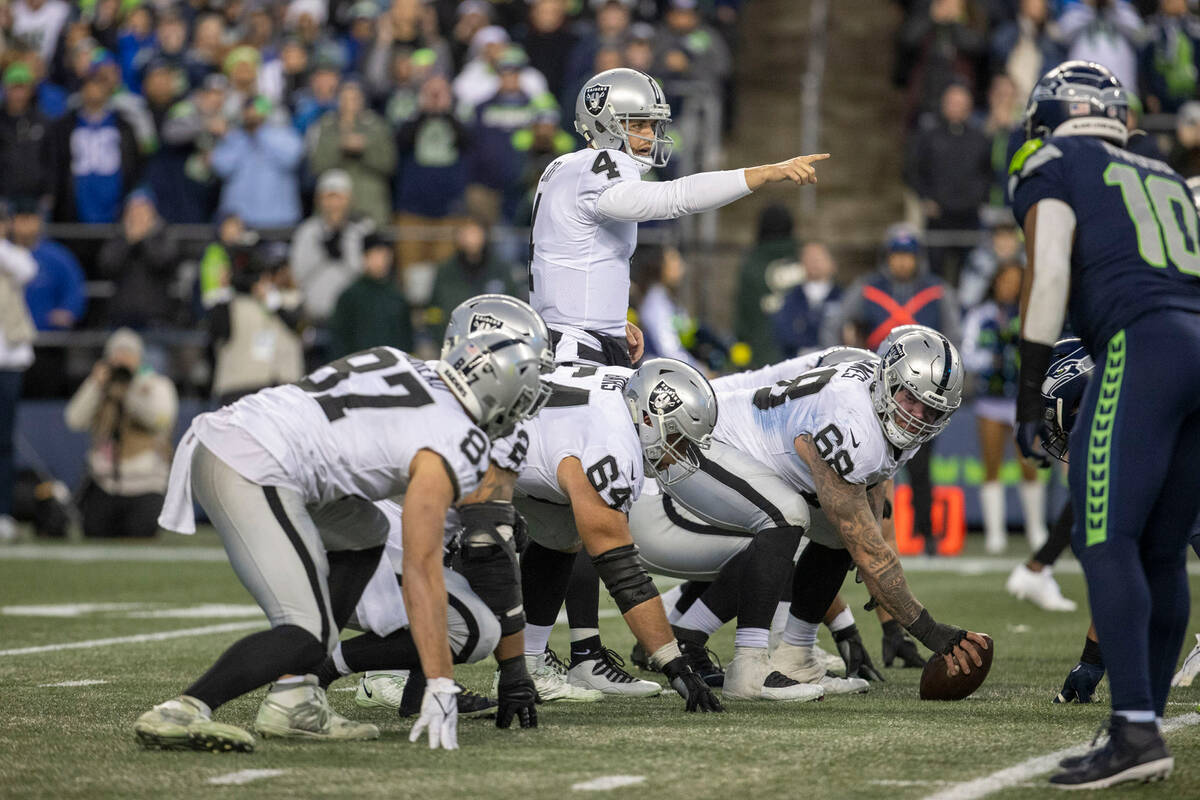 Raiders quarterback Derek Carr (4) calls out instructions from the line of scrimmage during overtime of an NFL game against the Seattle Seahawks at Lumen Field on Sunday, Nov. 27, 2022, in Seattle. (Heidi Fang/Las Vegas Review-Journal) @HeidiFang 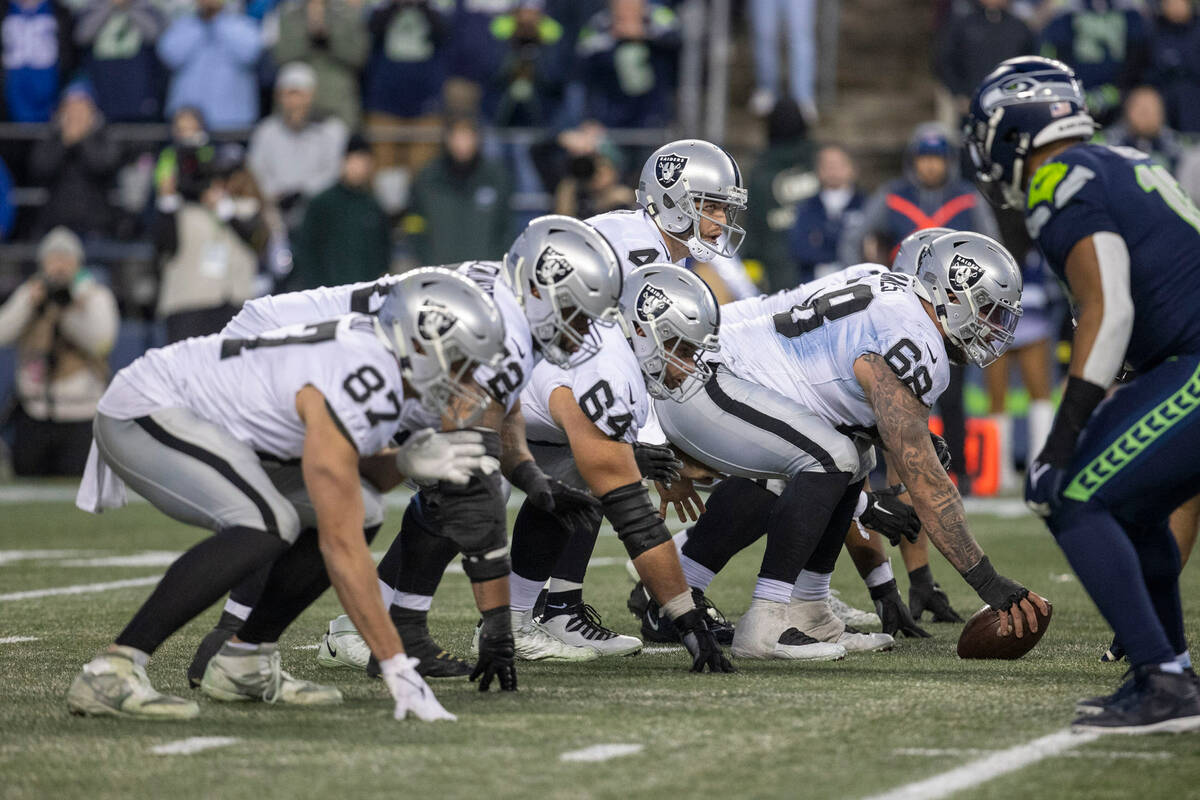 Raiders quarterback Derek Carr (4) lines up behind center Andre James (68) during overtime of an NFL game against the Seattle Seahawks at Lumen Field on Sunday, Nov. 27, 2022, in Seattle. (Heidi Fang/Las Vegas Review-Journal) @HeidiFang 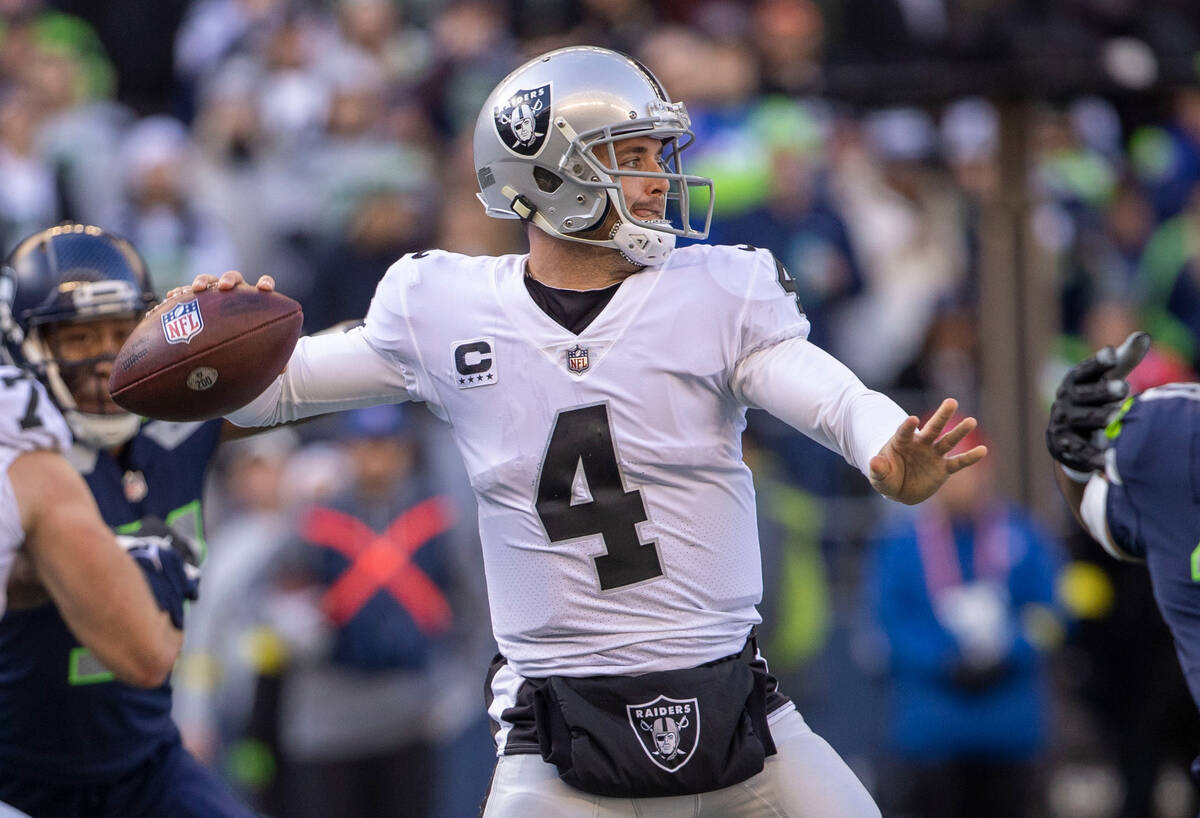 Raiders quarterback Derek Carr (4) prepares to throw during the first half of an NFL game against the Seattle Seahawks at Lumen Field on Sunday, Nov. 27, 2022, in Seattle. (Heidi Fang/Las Vegas Review-Journal) @HeidiFang

It’s not always the statistic you want to be associated with most in football.

But when push has come to mighty shove and a game-winning drive is needed, Raiders quarterback Derek Carr has been better than most across the NFL for some time.

The Raiders have walked off the past two weeks with overtime road wins, first against AFC West rival Denver and then Seattle.

They might get another opportunity Sunday when the Chargers visit Allegiant Stadium.

It’s a stark difference from earlier results, when the Raiders lost their first six one-score games and couldn’t finish anything they started — even with possessing the ball with an opportunity to win or tie in all six.

There were no comeback victories then. No game-winning drives.

“You have to understand that it’s not going to work out every time,” Carr said. “You watch those basketball players take the last shot; they’ll be the first ones to tell you how many they’ve missed, and I’m the same way.

“You know you have four downs really to throw for a first down or go run with your legs. I wish I had like some big secret, but it really just comes down to taking the big moment and just simplifying it into, ‘OK, just doing my job on this play hopefully will lead us down the field and into the end zone.’”

It doesn’t just happen. Much goes into any level of clutch play. A lot more than you might imagine if asking Raiders coach Josh McDaniels.

His take: You need lots of mental toughness. A supreme focus on where you are in a game and what needs to be done. Understanding how the game is being played. Knowing — depending on what type of rush you have seen throughout the game — how long you can hold onto the ball.

Knowing your own personnel, how the defense is playing you, where you might be able to attack and who to go to with the football. And to do all of it in a split second.

“I just think there’s a poise and an understanding of where you’re at in time and space that allows those people to really slow their heartbeat down and perform their best at the very end under the most pressure,” McDaniels said. “Block out crowd noise, block out all the other stuff that’s going on and just focus on trying to make one good play after another. And the guys that do it the best seem to be able to do that week after week.”

Carr did so against the Broncos two weeks ago, hitting Davante Adams with a 35-yard scoring pass to stroll off Empower Field at Mile High winners.

Last week, Carr checked out of a pass play into a run and then watched as Josh Jacobs sprinted 86 yards for a game-winner in Seattle.

This, after a Carr scoring pass to tight end Foster Moreau with 1:54 remaining in regulation forced overtime.

“A lot of this game is about repetition,” Moreau said. “(Carr) has done a good job over the years, and he has gotten a lot of reps at it obviously. We don’t want to be under the gun like that, but when it comes down to it, it’s a valuable skill, a valuable club in his bag he’s able to pull out.

“You just have to take your knowledge of past situations that you’ve already run through and see where you can apply them. They’re all different. I’ll go to war with him in any situation, especially when it comes down to the wire.”

When it matters most.