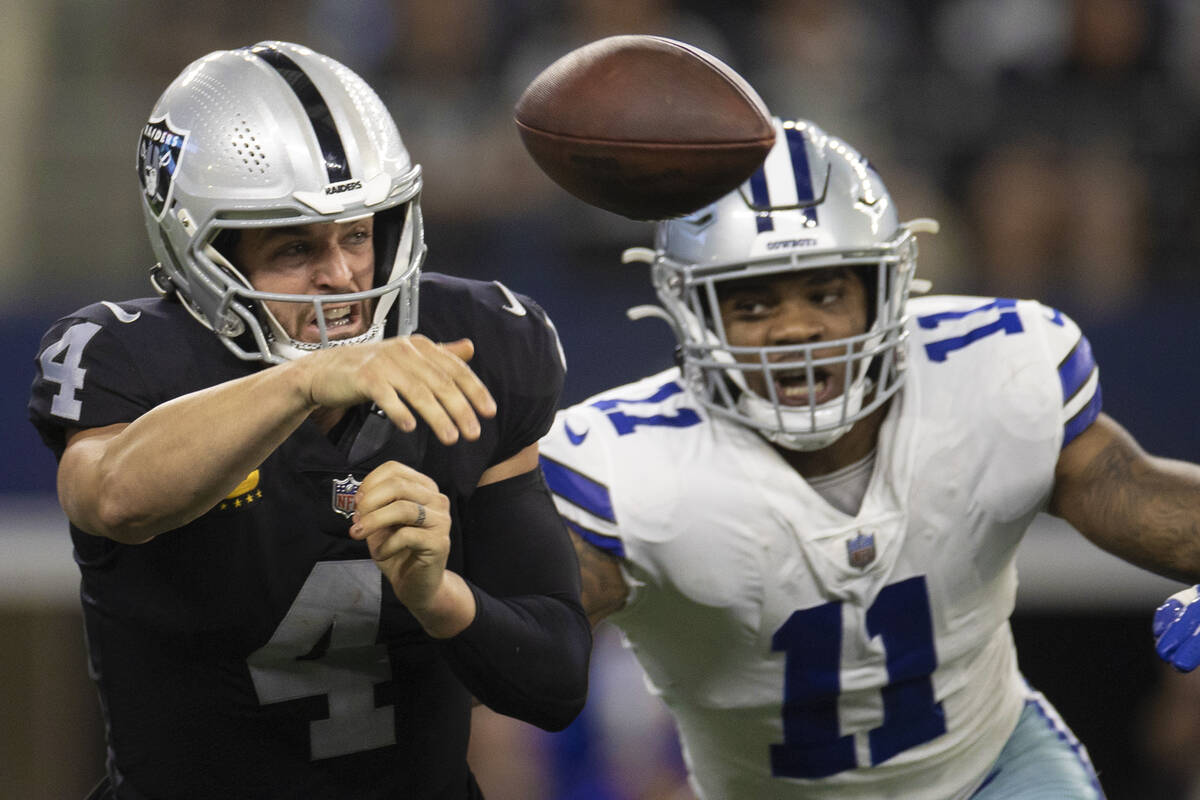 Raiders quarterback Derek Carr (4) gets rid of the ball at the last second with pressure from Dallas Cowboys outside linebacker Micah Parsons (11) in the first half during an NFL football game on Thursday, Nov. 25, 2021, at AT&T Stadium, in Arlington, Texas. (Benjamin Hager/Las Vegas Review-Journal) @benjaminhphoto 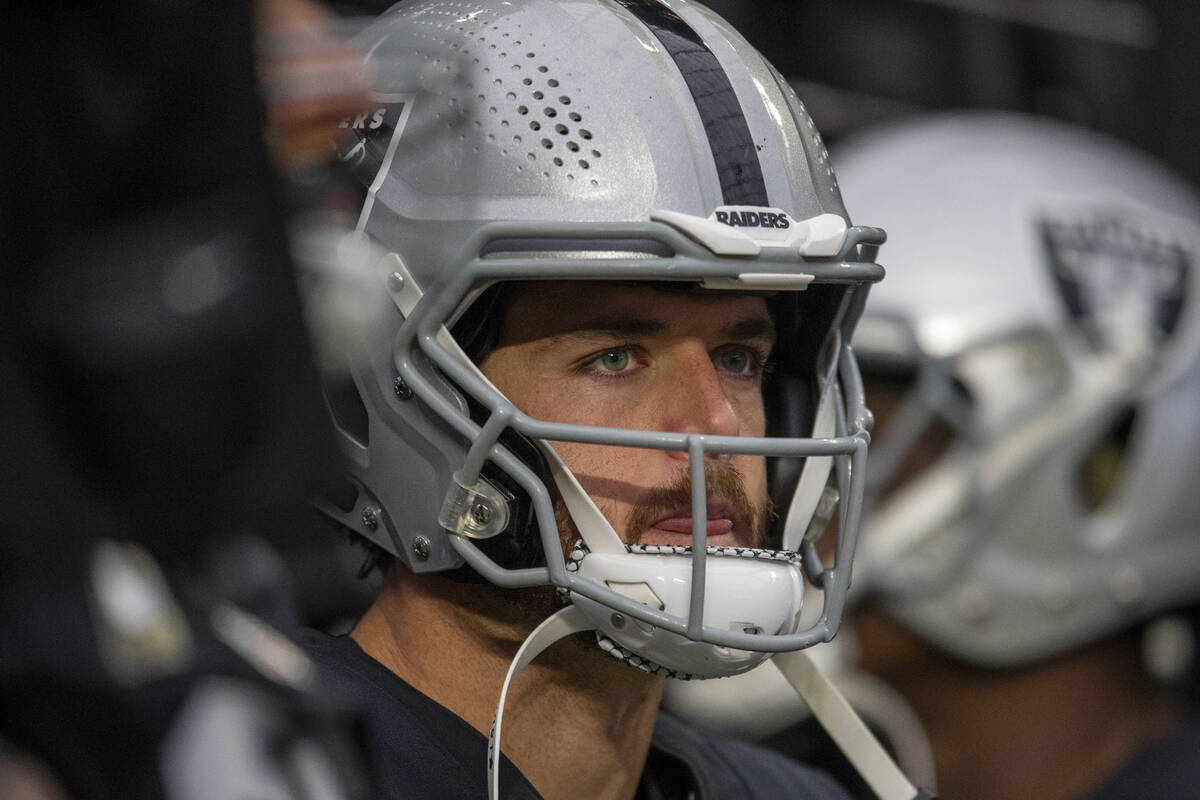 Raiders quarterback Derek Carr (4) waits in the tunnel to take the field before an NFL football game against the Cincinnati Bengals on Sunday, Nov. 21, 2021, at Allegiant Stadium in Las Vegas. (Heidi Fang/Las Vegas Review-Journal) @HeidiFang 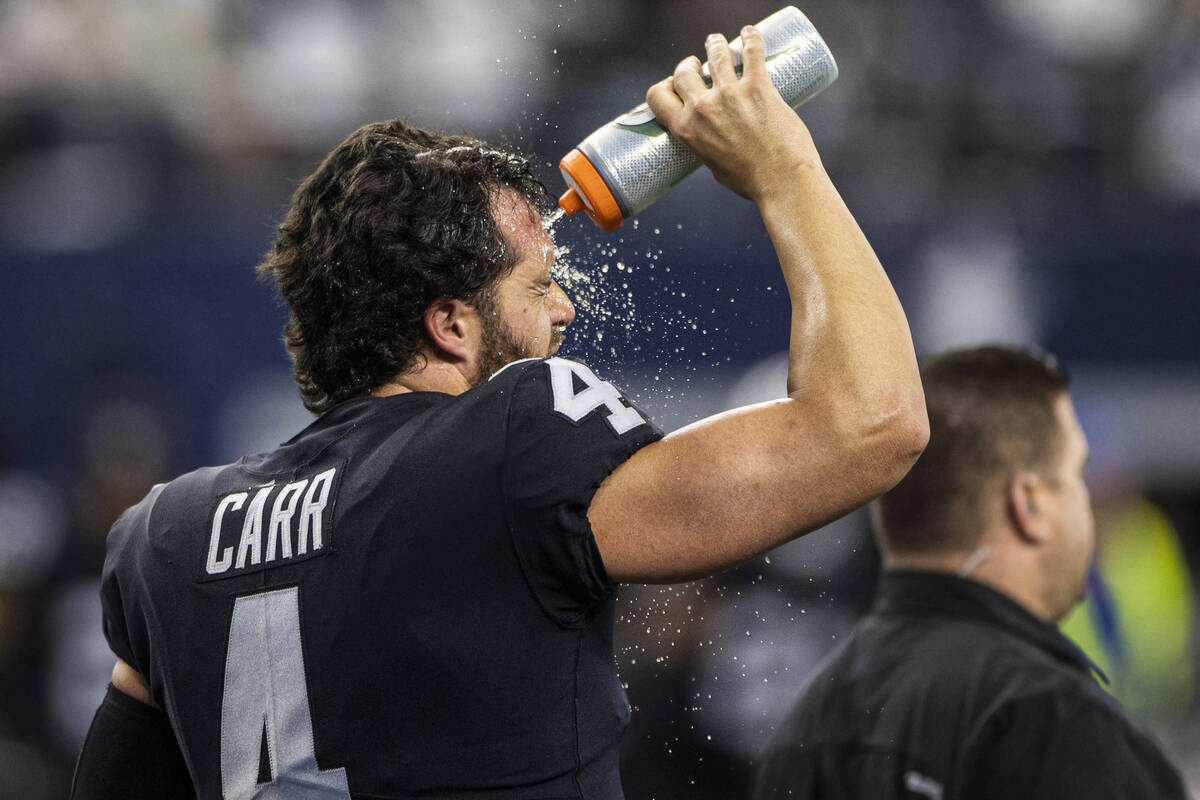 Raiders quarterback Derek Carr (4) cools off during warm ups before the start of an NFL football game against the Dallas Cowboys on Thursday, Nov. 25, 2021, at AT&T Stadium, in Arlington, Texas. (Benjamin Hager/Las Vegas Review-Journal) @benjaminhphoto

From the not-so-breaking news department: When quarterback Derek Carr plays well this season, the Raiders win. When he isn’t so good, they don’t.

The obvious sometimes is a significant tool by which to evaluate a team. Even more so when there’s such a wide discrepancy in something like Carr’s performances.

It’s not the be-all, end-all of why the Raiders find themselves 6-5 while preparing to meet the Washington Football Team on Sunday at Allegiant Stadium. Never is.

More goes into wins and losses than the play of a quarterback. Carr might lead the NFL in passing yards at 3,414, but you reach such a number for various reasons.

(More on those later.)

Still, consider: The Raiders are 6-0 when Carr throws for at least 300 yards. They have averaged 32 points in those games.

A pretty significant difference. The good and bad and ups and downs of an eight-year starter.

“We now have some guys that can really fly. It’s no secret that we are trying to throw the ball deep. You are always trying to improve the process.”

Carr is on pace to throw for the third-most yards in league history, helped by the fact there are now 17 regular-season games.

Problem: All those yards haven’t always translated to touchdown passes. Carr has 17 on the season to nine interceptions. Which brings us back to the red elephant in the room. The red zone.

It’s not good for the Raiders and hasn’t been in what seems like forever. They rank 28th in red zone efficiency. Carr can be explosive as all heck between the 20s, but not so much within a field’s most critical area.

“It starts at practice, at preparation, at putting together a better plan,” said offensive coordinator Greg Olson. “We have to make sure, depending on the scheme we’re facing, that we’re (promoting) the strengths of our players. I need to do a better job with the planning and preparation and practice and execution of it.”

It’s also true that Carr’s big passing games have been somewhat a result of an anemic rushing attack (minus the ground effort at Dallas on Thanksgiving). If you can’t consistently turn around and have confidence in handing off the ball, the obvious alternative is to throw more.

The Raiders rank 27th in rushing among 32 teams, averaging just 89.1 yards per game. There is also the issue of an offensive line that has struggled for most of the season with performance and injury.

Can’t run all that well.

Can’t block all that well.

Neither the fault of a quarterback.

But such a combination makes for more and more dropbacks and play-action passes, the latter of which Olson has opted for since assuming play-calling duties six games ago.

If they do it to the point where he throws for 300 or more yards, they should be fine.