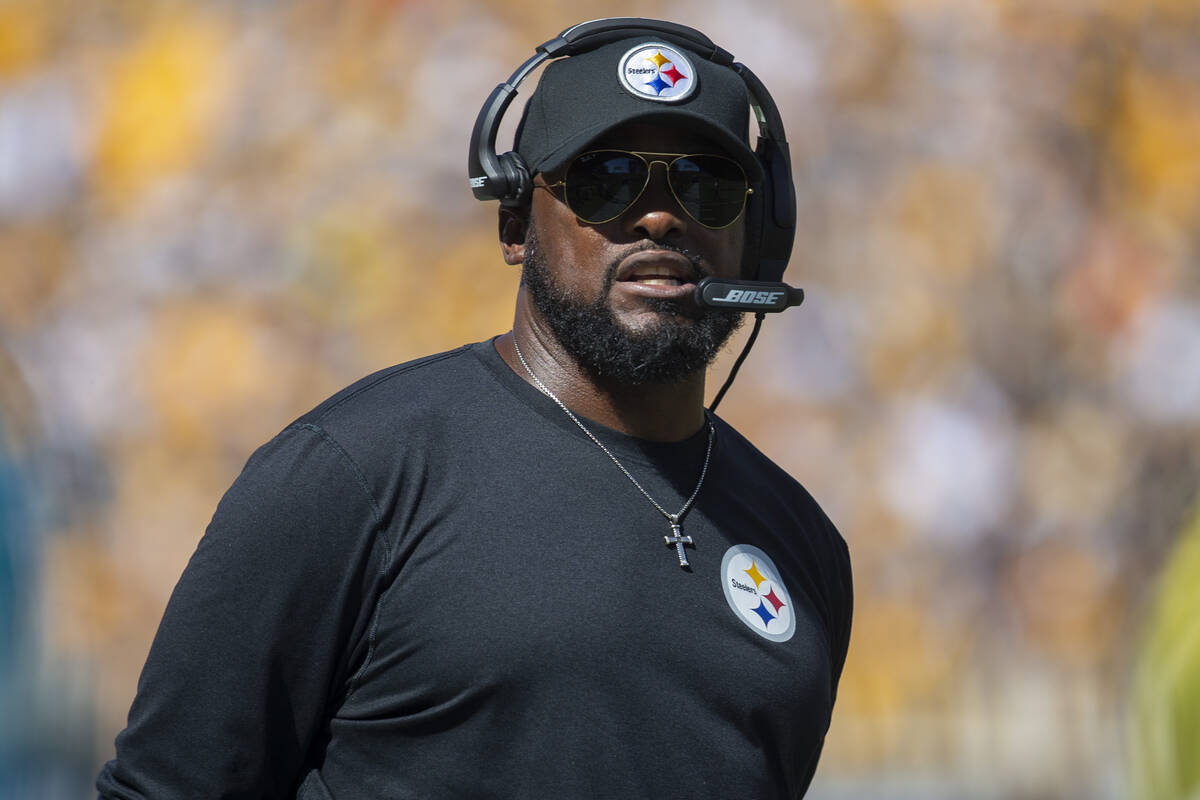 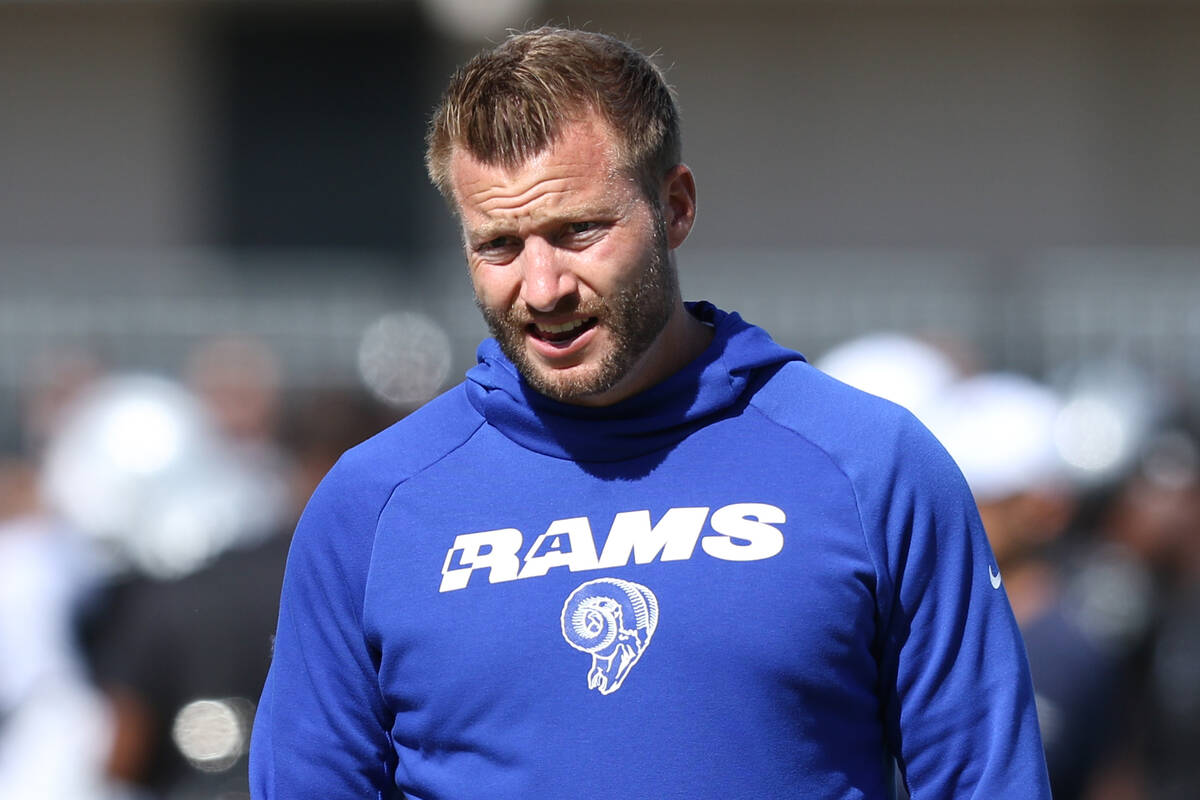 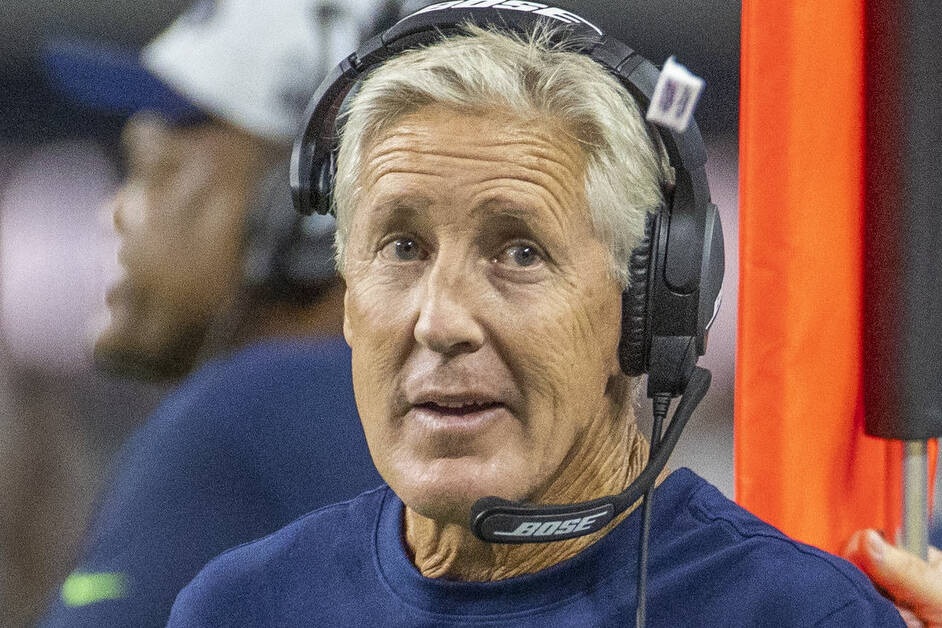 Seattle Seahawks head coach Pete Carroll tosses a piece of gum to a player on the sidelines during the second quarter of the Raiders home opening pre-season NFL football game versus the Seattle Seahawks at Allegiant Stadium on Saturday, Aug. 14, 2021. (L.E. Baskow/Las Vegas Review-Journal) @Left_Eye_Images 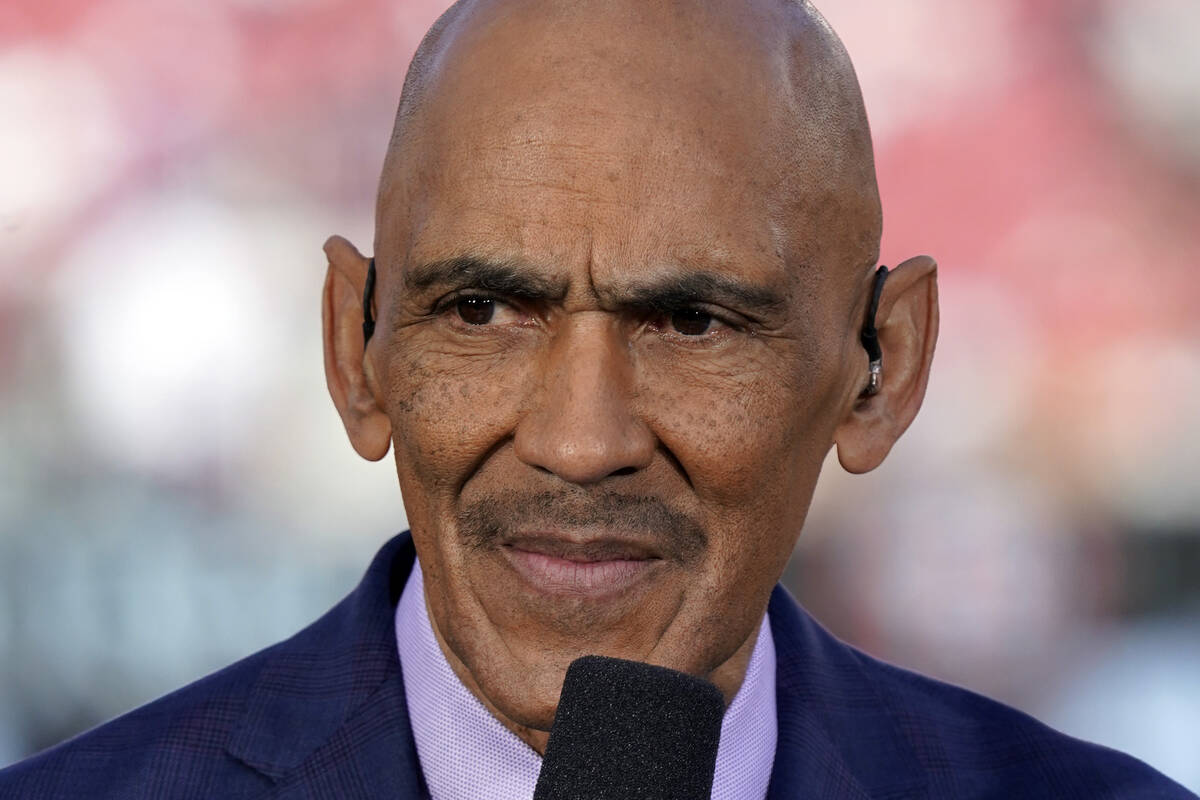 FILE - Tony Dungy looks on before an NFL divisional playoff football game between the San Francisco 49ers and the Minnesota Vikings, Saturday, Jan. 11, 2020, in Santa Clara, Calif. Hall of Fame coach Dungy learned long ago the need to know how to handle credit and blame. (AP Photo/Tony Avelar, File) 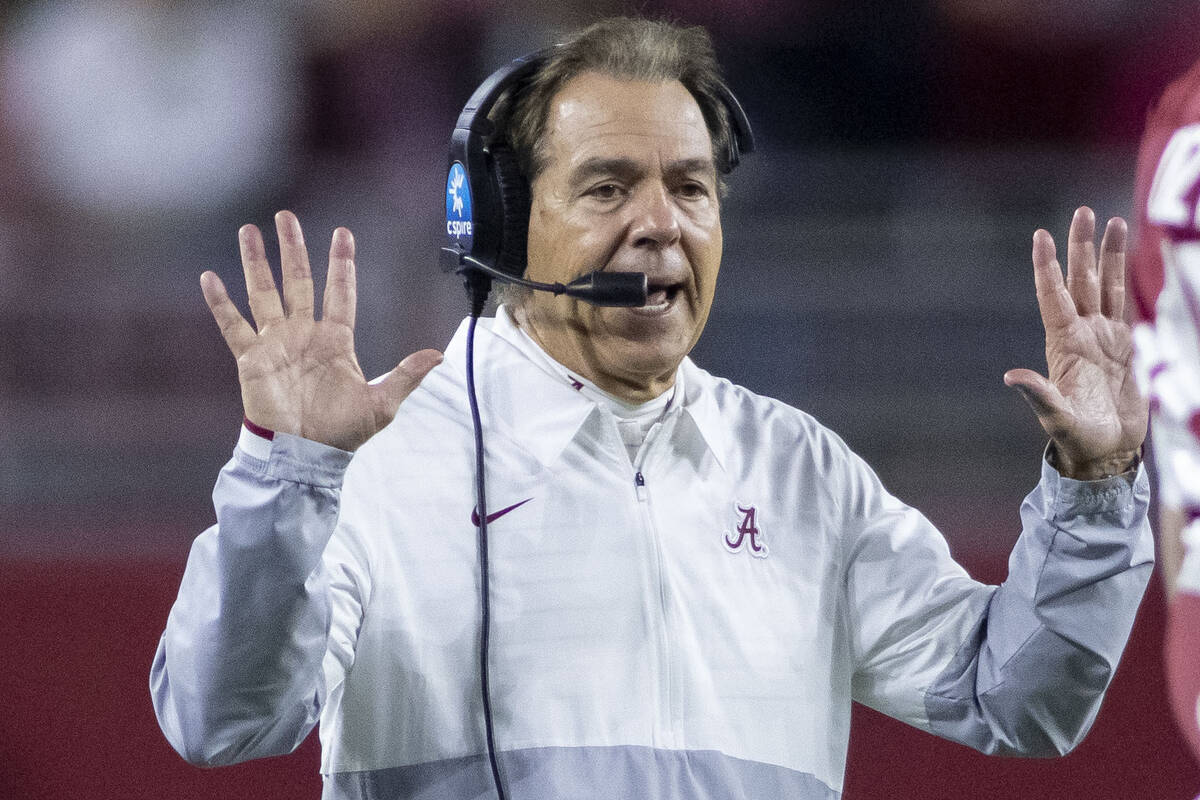 Alabama head coach Nick Saban calls for his hands team, expecting an onside kick from Arkansas during the second half of an NCAA college football game, Saturday, Nov. 20, 2021, in Tuscaloosa, Ala. (AP Photo/Vasha Hunt) 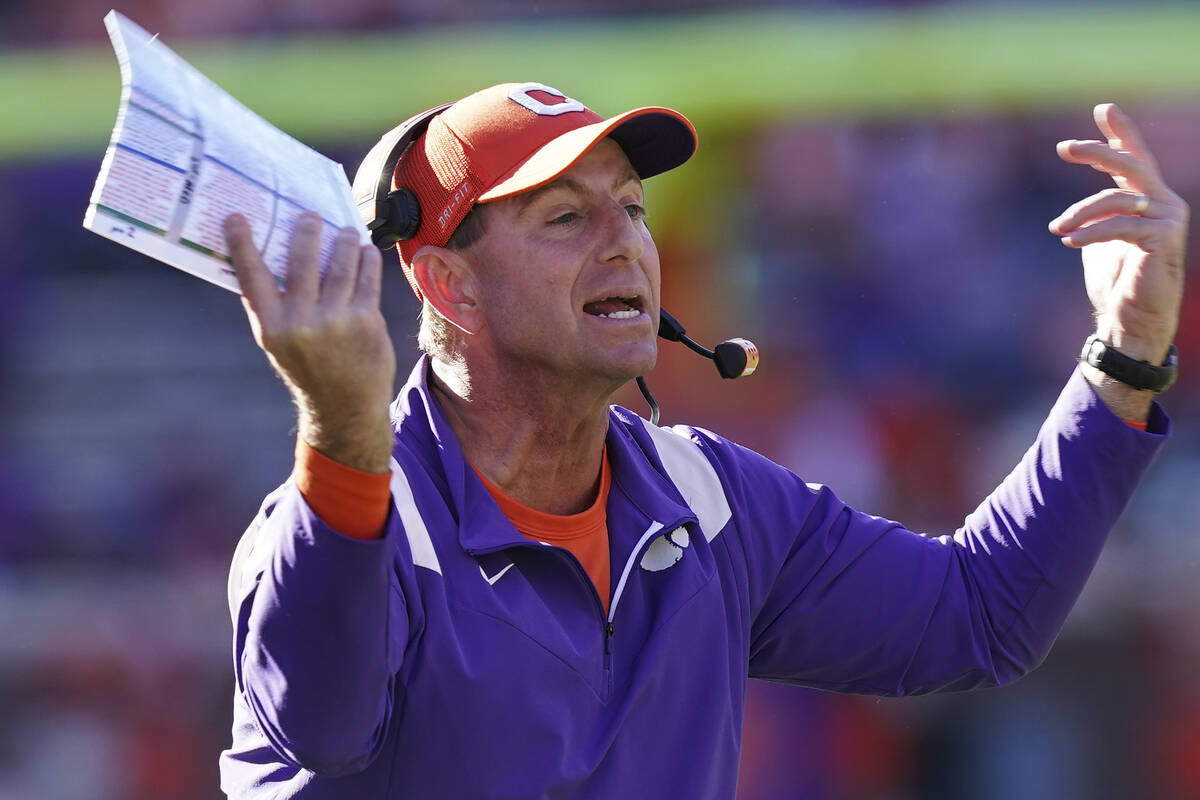 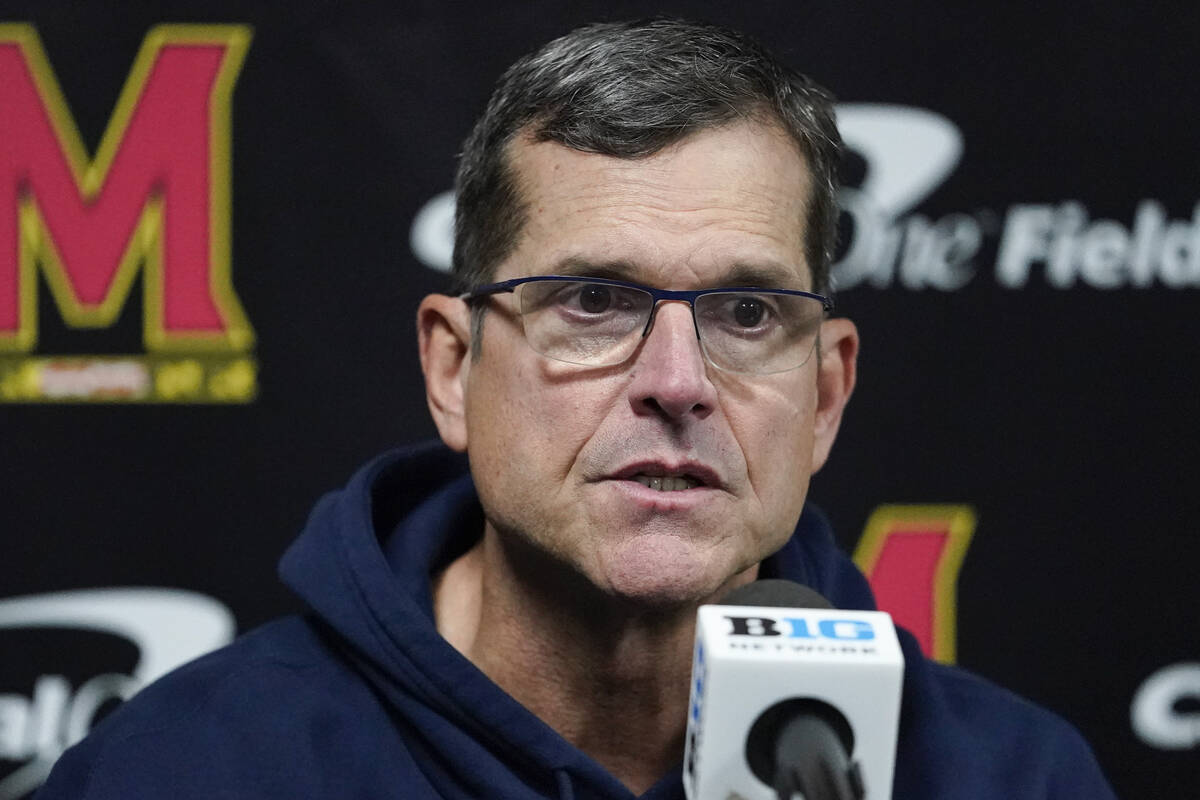 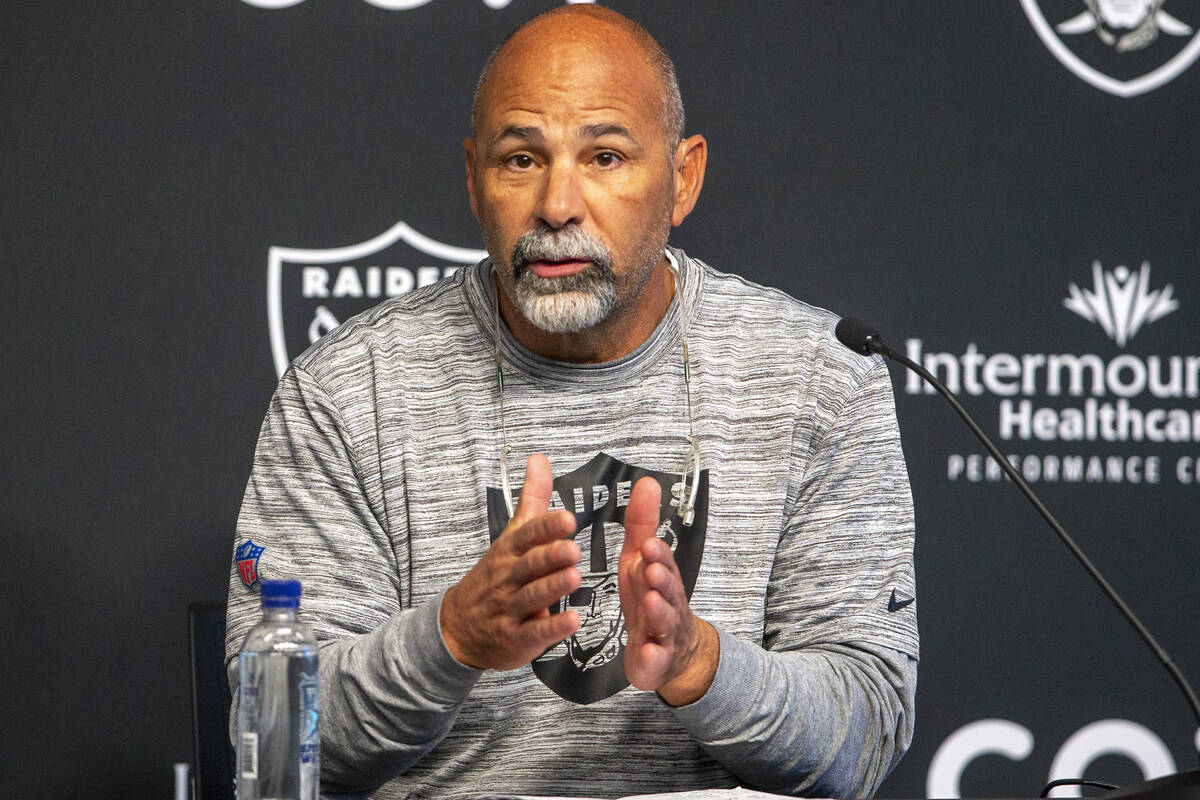 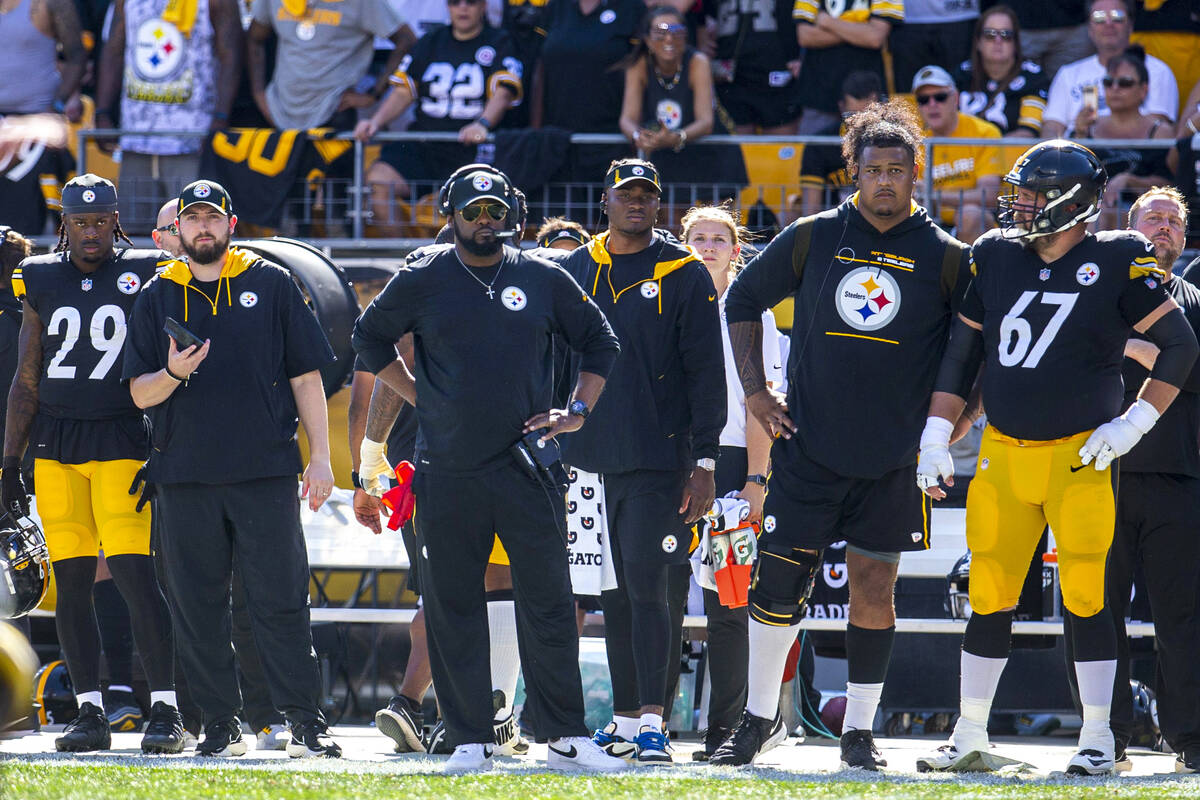 Pittsburgh Steelers head coach Mike Tomlin, center, stands with his hands on his hips on the sideline as he watches a special teams play during the second half of an NFL football game against the Raiders on Sunday, Sept. 19, 2021, at Heinz Field in Pittsburgh. (Heidi Fang/Las Vegas Review-Journal) @Heidi Fang

Lincoln Riley was hired as head football coach at Southern California on Monday. There are reports that he received — besides a $110 million contract — a $6 million house in Los Angeles and the use of a private jet 24/7 for his family.

He’s a home run hire for the Trojans.

I’m wondering if Mark Davis could do the same for the Raiders.

Well, maybe on the money and housing part. Davis as a team owner has been spotted flying commercial enough to think the private jet a long shot.

I know. The Raiders have an interim head coach in Rich Bisaccia. The focus is and should entirely be on making a playoff push with him these last six games.

But the craziness of what has occurred across the college landscape — Riley bolting Oklahoma for the beach, Brian Kelly bidding farewell to Notre Dame for Louisiana State and $95 million — proves it’s possible to grab your massive headline and hire a more-than-competent coach at the same time.

A CBS report this week suggested Davis had not begun a coaching search and “has rebuffed inquiries from many interested parties” in the months since Jon Gruden resigned.

I absolutely believe Davis’ premier focus is on his team making the playoffs for just the second time in 19 years.

But to accept he hasn’t at least considered coaching candidates is to suggest quarterback Derek Carr doesn’t follow what is written and said about him, and we all know that is not true.

Davis has thought about the hire. It would be irresponsible not to.

Let us aid him then, in the search for a fastball down the middle.

But who doesn’t love the home run?

This would be Willie Stargell hitting a ball out of Dodger Stadium in 1965. Tomlin has been head coach of Pittsburgh since 2007 and is a Super Bowl champion. But the Steelers last won an AFC title in 2010. Might he be ready for a change?

When asked about possibly leaving for a college job recently, Tomlin said a fairy godmother would have to present him a check for hundreds of millions of dollars.

Al Davis was the Godfather. How much would his son pay to grab Tomlin? The Raiders, who love to promote diversity hires, couldn’t do better.

Think about it. The Rams next have a draft pick in like 2054, so why not have Davis really act the part of his gambling father and ship a bunch of high selections to Los Angeles and lure McVay to Las Vegas? Boy Wonder does buffets.

Talk about possibly needing a change of scenery. In his 12th season with the Seahawks and a Super Bowl champion, Carroll also serves as the team’s executive vice president. His teams have won 10 or more games and made the playoffs in eight of nine years. The Raiders would take that, no?

Would he be interested enough to leave television and return to the sidelines? Dungy ultimately agreed with the Raiders moving on from Gruden. He’s a former 13-year NFL head coach, who was replaced by Gruden in Tampa Bay. He’s also a Super Bowl champion and likely refreshed enough that such an opportunity could excite him.

Stop. We know of his 15-17 record when coach of the Dolphins. But nothing challenges the greatest among us like proving others wrong. Hire him and allow him complete control.

Besides, he’s fed up with those Alabama fans who think his team should win every game 63-3. Which means all Alabama fans.

He’s 52 — 18 years younger than Saban — and you have to believe the idea of making the NFL jump has crossed his mind more than once. He has two national titles at Clemson. It gets to the point (hello, ‘Bama) where you become devoured by the unreal expectations of others.

Under fire at Michigan for years, he finally beat Ohio State and is likely headed to the College Football Playoff. He’s a former NFL Head Coach of the Year who led the 49ers to a Super Bowl, a former quarterbacks coach of the Raiders and greatly admired Al Davis. The Raiders launched his coaching career. ‘’Nuff said.

Hey, if the Raiders make the playoffs and maybe win a game, the home run hire might already be employed by the team.

He might even take the job without a private jet for his family.

3
Davante Adams hints at reunion with Aaron Rodgers on Raiders