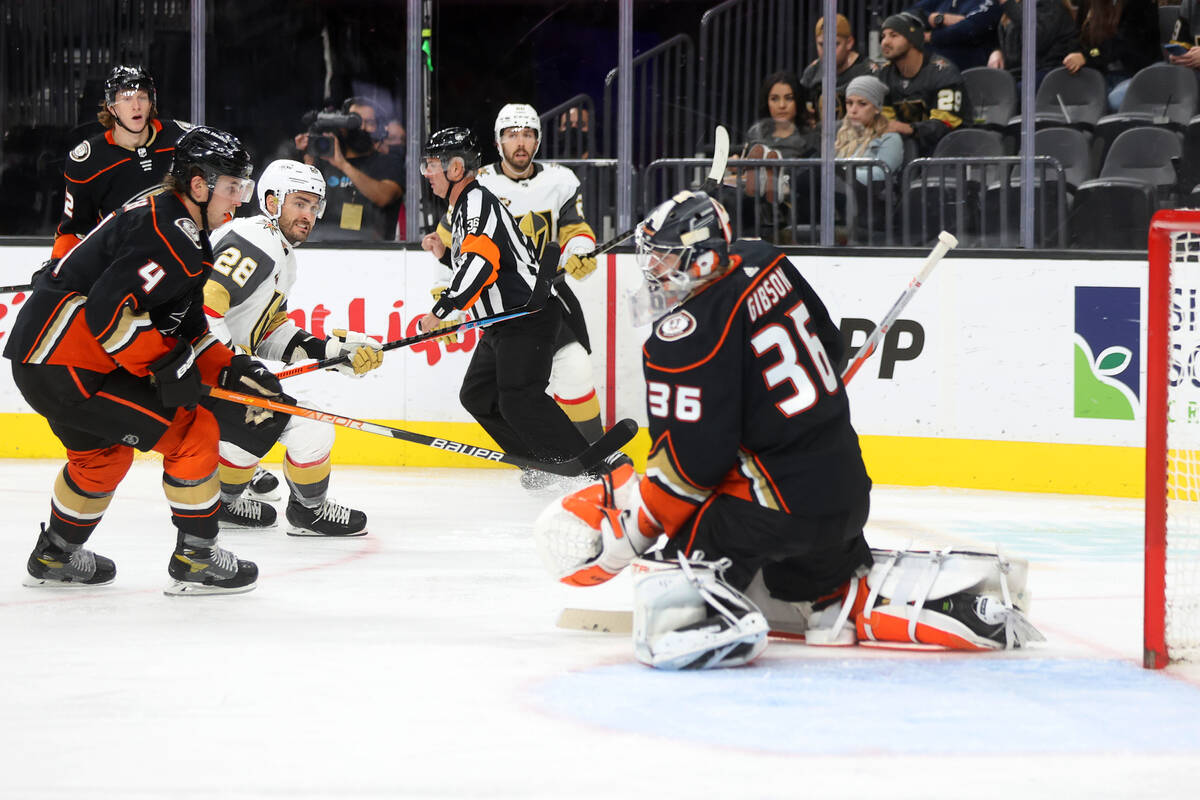 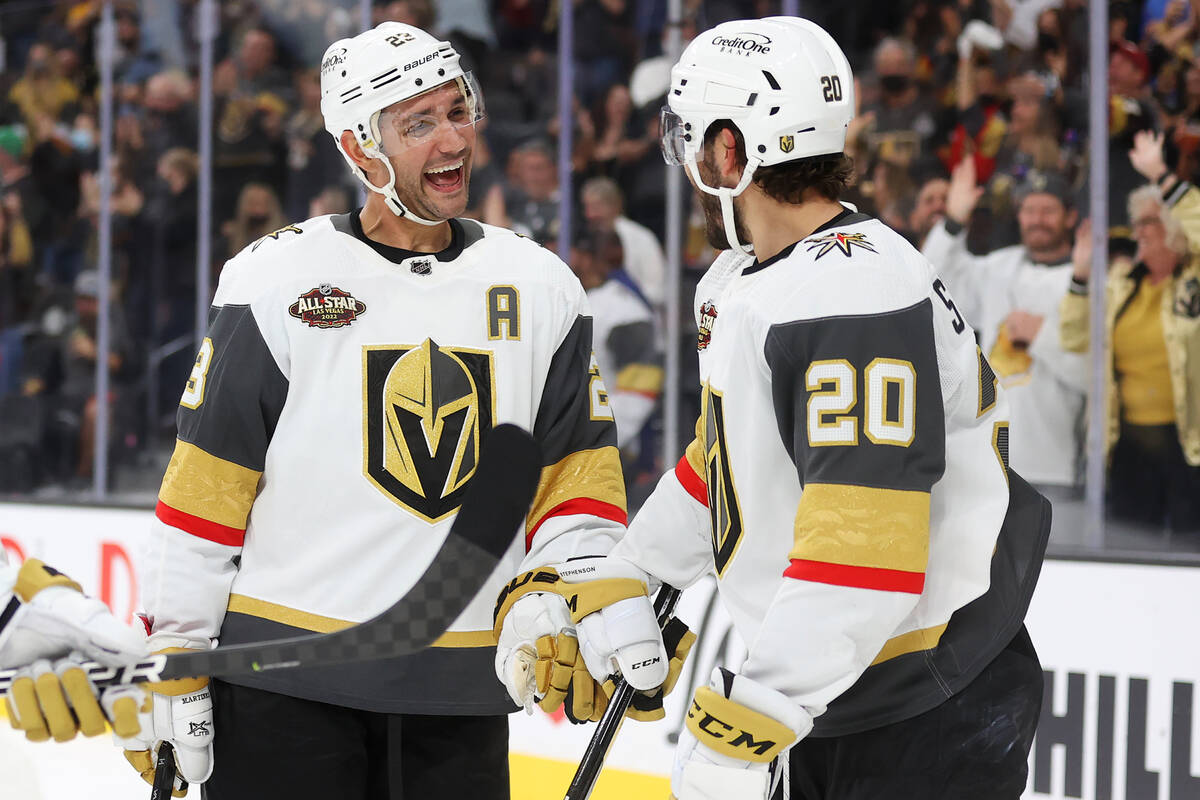 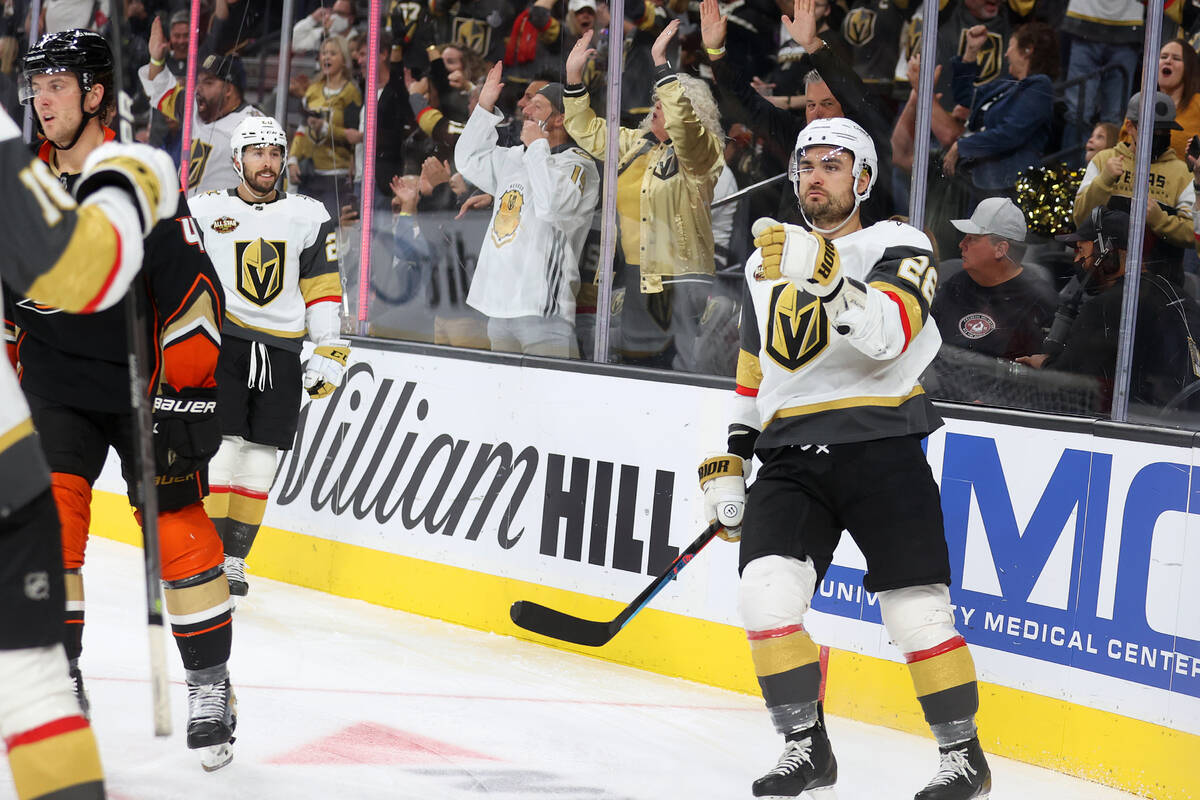 So the sky hasn’t fallen and the world hasn’t ended and that playoff spot out of the not-so-mighty Pacific Division hasn’t been lost just yet for the Golden Knights.

And still no word on where Jack Eichel might next be calling home.

Just another wild and spooky night at T-Mobile Arena.

Make it three straight victories for a Knights team whose slow start (really) early in the season was causing heavier-than-normal backups of stressed folks along I-15.

Oh, the humanity of losing four straight … in October.

The Knights survived Anaheim 5-4 in a shootout Friday before a Halloween weekend gathering of 18,029.

The hosts led 4-1 in the third period. Then the Ducks scored three times in span of 5:11.

Then I-15 became illuminated with brake lights.

“It’s that time of year when you look around the league and there are a lot of blown leads,” Knights coach Pete DeBoer said. “Teams don’t have things locked down yet. We found a way to get up and win.”

Interesting. The Knights and Ducks are two of the most talked about teams reportedly pursuing a deal for Eichel, the injured center for Buffalo close to departing the Sabres.

Here’s the thing: Can the Knights make it work financially? Would a third team need to be involved?

Is it true William Carrier might be the toughest dude from here to his hometown of Pierrefonds, Quebec? (More on that later.)

The salary cap part of any Eichel trade wouldn’t be immediately solved, but know the Knights would have to get out in front of things now by moving some heavy money.

Eichel carries a $10 million annual cap hit and will eventually have neck surgery and recover and come off long-term injured reserve. By that time, the Knights also could have the likes of Max Pacioretty and Alex Tuch back from LTIR.

Then it’s about counting all those dollars.

Look: If you believe the medicals on Eichel’s injury and are fine with his wishes for an artificial disk replacement surgery, it’s almost impossible not to seriously pursue him at age 25.

Even for a player who appeared in just 21 games last season and would potentially miss months after the procedure. He’s that elite. That enticing a piece to the puzzle for a team that again believes it is Stanley Cup material.

Buffalo is reportedly asking for something along the lines of multiple draft picks and a top prospect and a defenseman and forward under control. And probably Nevada’s portion of the Hoover Dam as a throw-in.

I’m just not sure there is a price too high. Not for someone this good who would fill your team’s biggest need. Keep close watch. Things could happen fast one way or the other.

Hockey is weird. The Knights at one point Friday were outshooting Anaheim 8-0.

And the Knights still led only 1-0.

That’s because Anaheim goalie John Gibson tends to stand on his head more than a yoga instructor.

But he’s not tougher than Carrier.

The Knights forward had to be helped from the ice after blocking a shot at Dallas on Wednesday. Could barely get to his feet. And yet there he was Friday, scoring his first goal of the season to make it 4-1.

Then things got all sorts of crazy. Happy Halloween, is right.

“This was a huge week for us,” said DeBoer, whose team was playing its fifth game in eight nights. “We were staring at a potentially disastrous start. But the guys dug deep to get us back to .500.”

Depending on what could occur with Eichel, that might not be the most notable headline of the week.