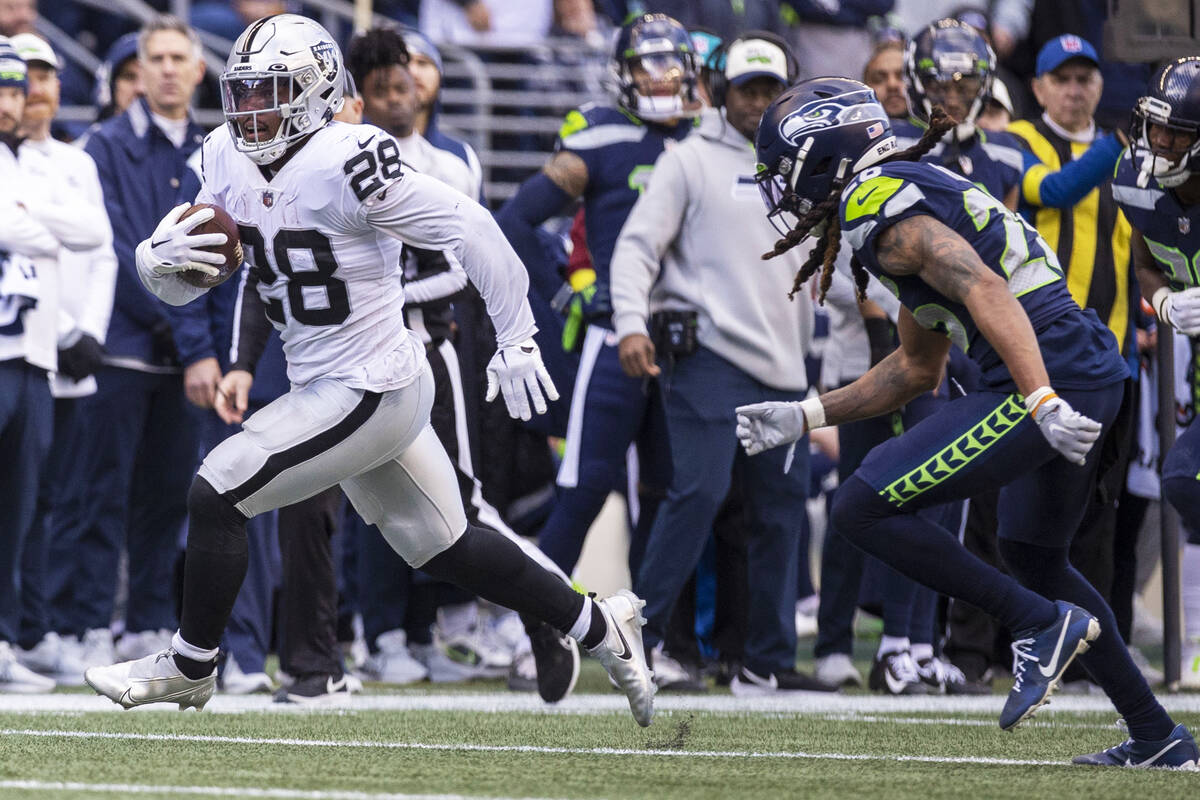 Raiders running back Josh Jacobs (28) runs past Seattle Seahawks safety Ryan Neal (26) to the end zone during the first half of an NFL game at Lumen Field on Sunday, Nov. 27, 2022, in Seattle. (Heidi Fang/Las Vegas Review-Journal) @HeidiFang 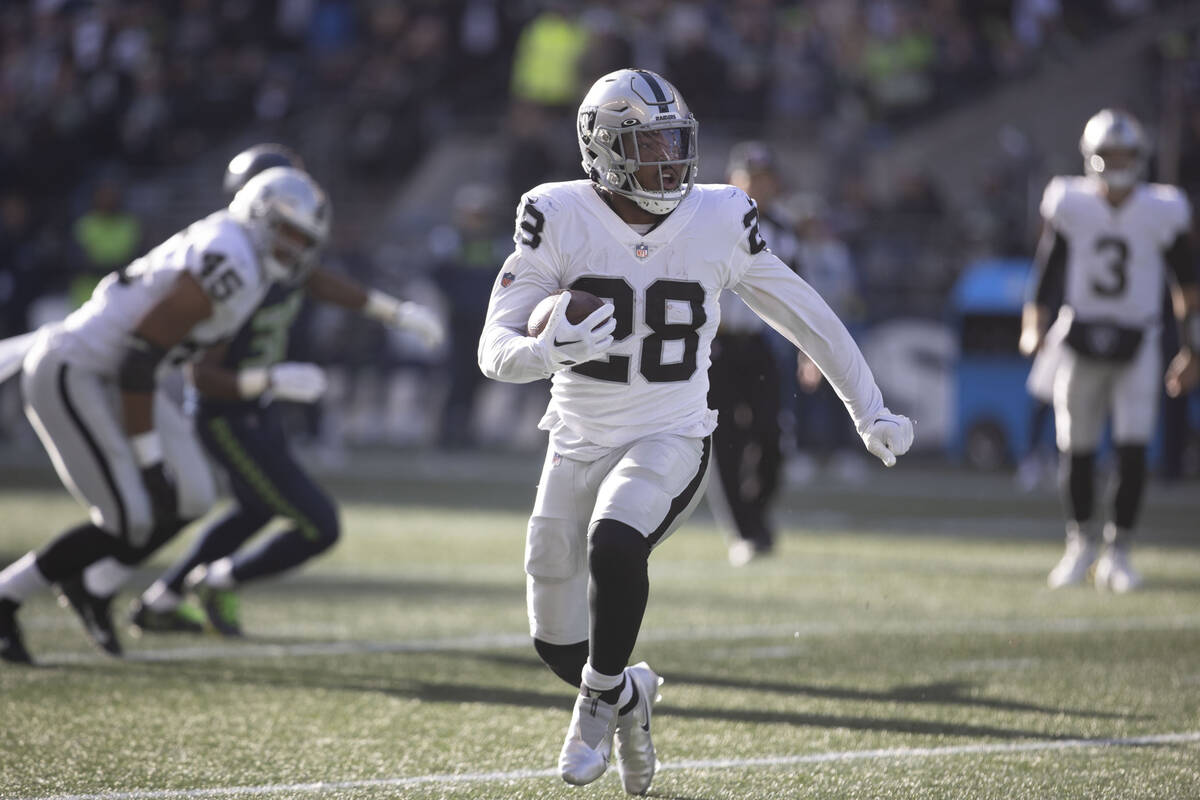 Raiders running back Josh Jacobs (28) has room to run during the first half of an NFL game at Lumen Field against the Seattle Seahawks on Sunday, Nov. 27, 2022, in Seattle. (Heidi Fang/Las Vegas Review-Journal) @HeidiFang 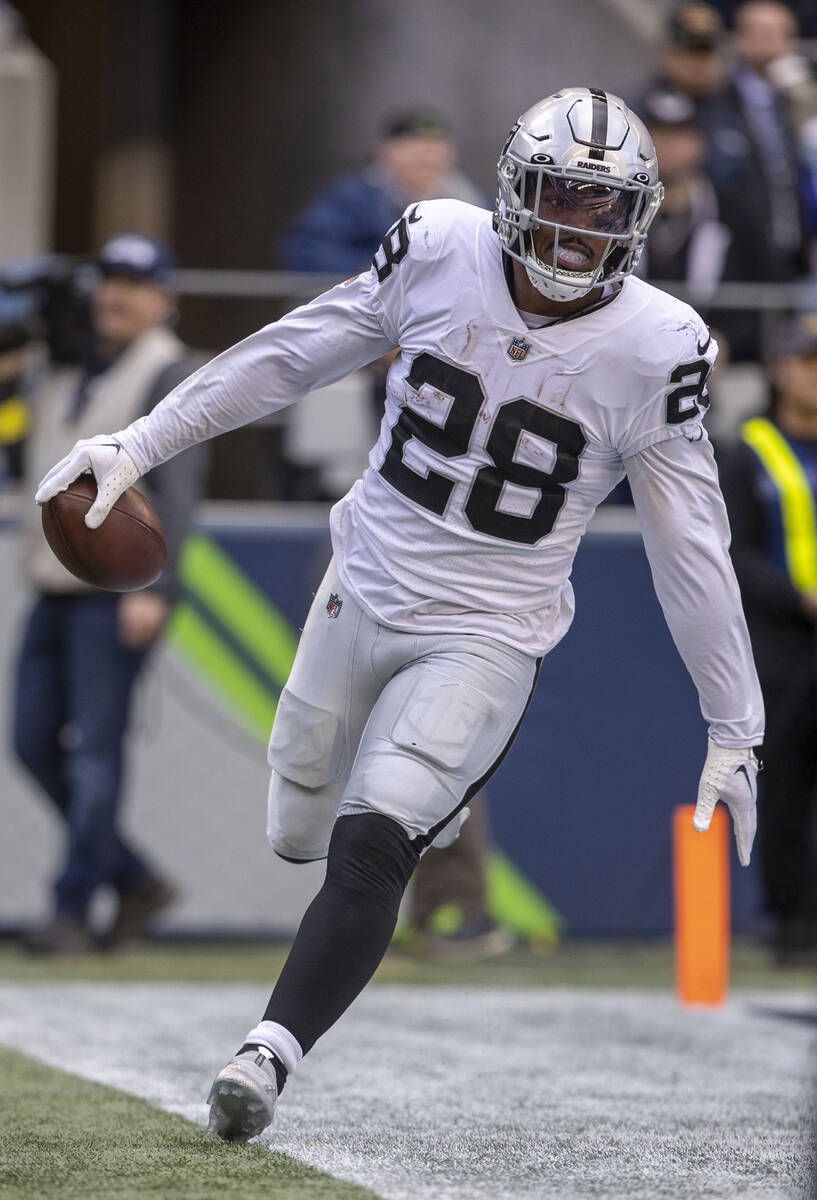 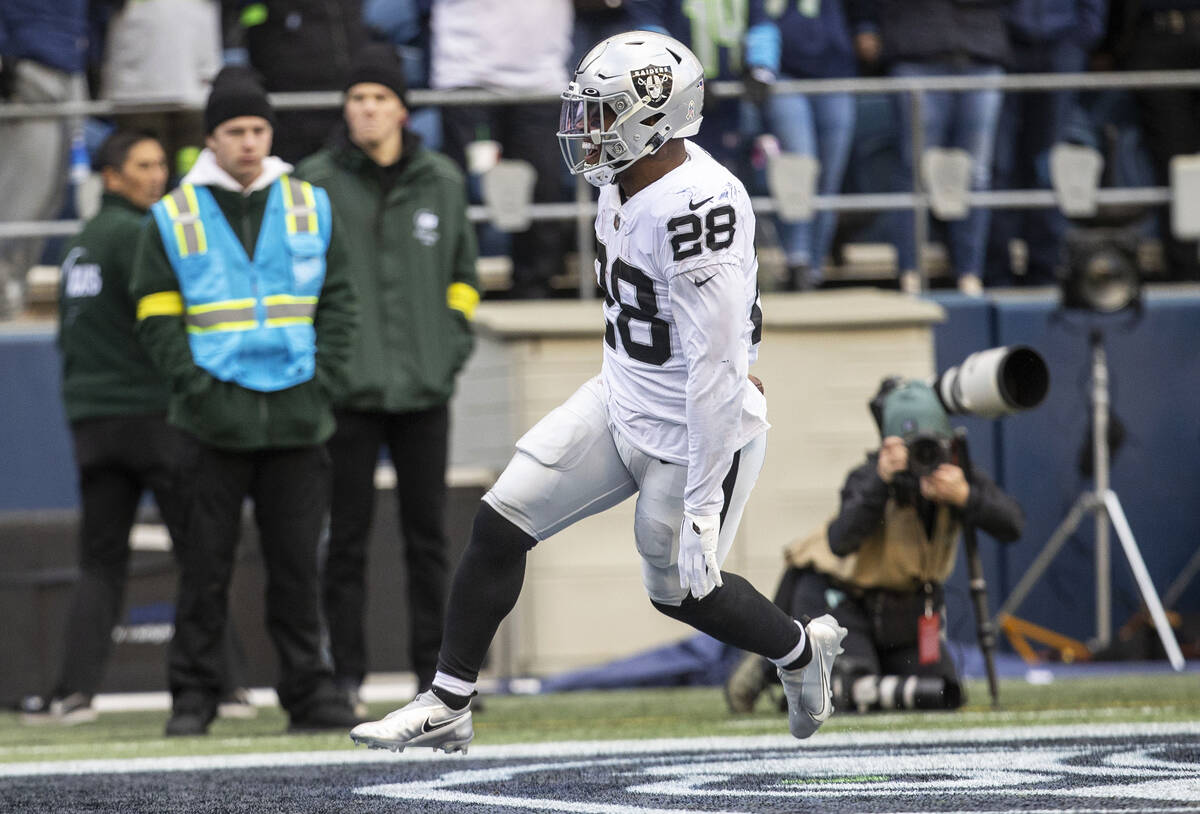 SEATTLE — We should all have such a gimpy calf.

It was a few hours before the Raiders engaged the Seahawks on Sunday at Lumen Field when Josh Jacobs warmed up and proclaimed himself fit from a left calf injury that had designated him questionable for the game.

“I looked the guys in their eyes and told them they were going to get everything out of me,” Jacobs said. “They didn’t want me to finish the game, but I convinced them I could go.”

And away he went, flying to a record afternoon and continuing what has been quite a statement season from the fourth-year pro out of Alabama.

The Raiders won their second consecutive overtime game in beating Seattle 40-34, led by a running back whose fifth-year option was declined by the team in April.

It seems that more than got the attention of Jacobs.

He would on this day set franchise records for rushing yards (229) and all-purpose yards (303). The final 86 came via the game’s last play, when he squirted through a hole, made safety Josh Jones miss and sprinted to victory.

“It’s kind of crazy,” Jacobs said. “I came in, not knowing I was going to play … I figure it will be good by next week.”

Yeah. Because it looked so bad Sunday.

Some amazing history: Jacobs’ final run came nearly 35 years after the iconic Bo Jackson’s 91-yarder for the Raiders in the old Kingdome on “Monday Night Football,” when he took out a safety before rumbling left.

Jackson’s incredible speed was such that he ran through the end zone and into a dark tunnel — one the greatest plays in NFL history.

Minor difference for Jacobs. He went right, and there was no tunnel.

“The calf looked OK today,” tight end Foster Moreau said jokingly. “He’s a special player. He takes on the burden more than anyone. For years, he has run hard for us. When he does something like this, he’s just special … We have to keep our foot on the gas for him.

“There’s only one guy who can carry the ball every play, so all 10 of us have to do a great job making sure we keep guys off him. Because when you do, he’s special.”

Jacobs as a starter had compiled at least 1,200 yards from scrimmage in each of his first three seasons. But this was also a new coaching staff that arrived from a back-by-committee mantra in New England. That idea died fast once the season began and Jacobs took off.

You never know with running backs, no matter how glorious a season one enjoys. You never know what anyone will be willing to pay once given the opportunity for a former first-round selection.

Be sure of this: Josh Jacobs had his option declined and has since opened eyes across the league. They probably got a lot wider Sunday when he took a handoff with 4:20 remaining in overtime and cut inside.

Moreau got off a clean block when he looked up to see Jacobs run past Jones and into daylight.

“I was like, ‘Oh, my gosh … yeah, he’s gone,’” Moreau said. “It was awesome … Then he almost threw the game-winning ball into the stands, so I went and played golden retriever and grabbed it.

“That speaks to who (Jacobs) is. He’s just so in the zone. He didn’t care about the ball. He just wanted to go celebrate with his teammates. Special human. Special player.”

One, it would seem, with a bionic calf.