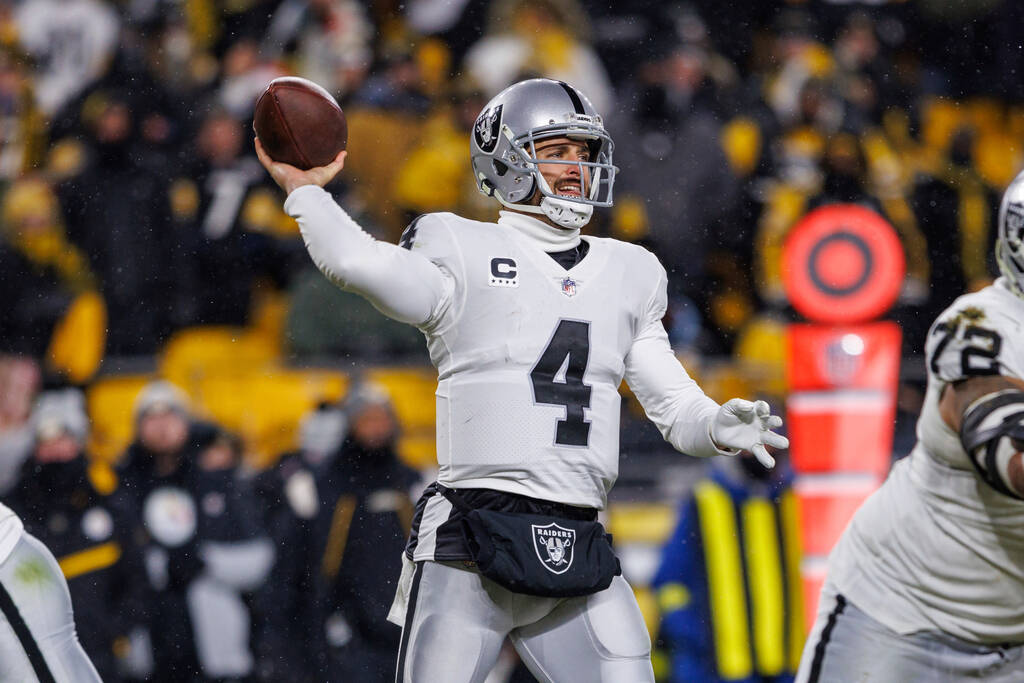 You could make an argument that the jury is back, that if these final handful of games are indeed an audition for Derek Carr to continue as Raiders quarterback next season, the verdict came in on a freezing night in Pittsburgh.

That things more than appear Carr won’t make a 10th season with the organization.

His was a forgettable performance in a 13-10 loss to the Steelers on Saturday night, Carr regressing throughout the 60 minutes after a 72-yard scoring drive followed the opening kickoff.

So much for highlights. It was bitter cold — for both teams. But the Raiders gained just 30 yards in offense over the second half. Thirty.

It was also worse in the manner Carr was outplayed by a rookie quarterback (Kenny Pickett) who has suffered two concussions this season.

Whispers within the league have grown loud of late that it’s inevitable the Raiders will move on from Carr at season’s end. They won’t become any quieter after this latest loss, one that dropped the Raiders to 6-9 and an inch or two from being eliminated from the playoff picture altogether.

“We felt like we were making strides in some areas,” Carr said. “Just have to do our job and move on, as much as it sucks … This one stings … We’re talented, but talent doesn’t mean wins.

“No matter what, you have to do your job the best you can.”

He would finish 16-of-30 for 174 yards and throw three second-half interceptions Saturday.

This part hasn’t changed: If the Raiders do choose to jettison Carr in some manner, they must have a replacement plan in place. Shouldn’t make the first leap without knowing the second.

Carr has the most value of any potential trade option for the team, and it would be interesting to see what sort of value he would demand on the market. Probably a stout one, given the weak class of veteran quarterbacks expected to be available.

There is also a quarterback-heavy draft, making moving up in the pecking order an inviting option.

Also know that head coach Josh McDaniels and general manager Dave Ziegler have never totally been sold that Carr could lead the team to a championship.

That’s the reason Carr’s salary in 2023 ($33 million) isn’t guaranteed until three days after the Super Bowl, which means the team left itself a mighty big out if things on the field didn’t go as planned in 2022. And they haven’t.

Carr ranks 26th in quarterback rating and leads the league in interceptions with 14. He has thrown nine in his last five games.

Yes. There have been injuries to some of his key weapons and far more offensive line rotations than the Raiders have blown second-half leads. But he hasn’t played well. Certainly to the point McDaniels and Ziegler have a serious decision to make.

If they haven’t already.

This was Carr in April, on the day a three-year, $125.5 million extension was announced:

“I’ve only wanted to be a Raider,” he said. “I told my agent, ‘I’m either going to be a Raider or I’m going to be playing golf.’ I don’t want to play anywhere else. That’s how much this place means to me. I was dead serious.”

“I had one year left on my contract. If it was one year, it was going to be one year. And I am crazy enough to go out there on one year and especially with the guys that are going to be around me. I said I’ll take that chance and see what happens.”

He did so, bet on himself, and things haven’t gone as planned. The jury might indeed be back, the verdict in.

Carr might soon have to test those words about not playing anywhere else.

Raiders give Derek Carr permission to talk with Saints