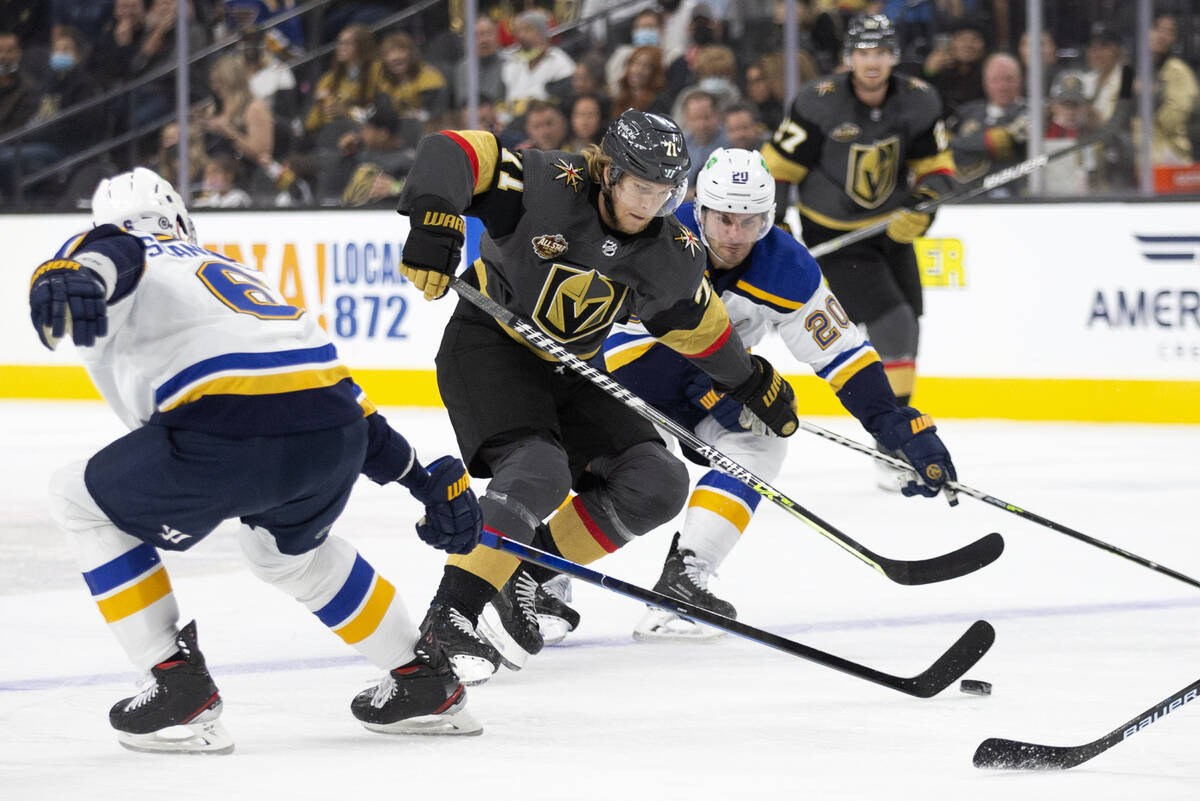 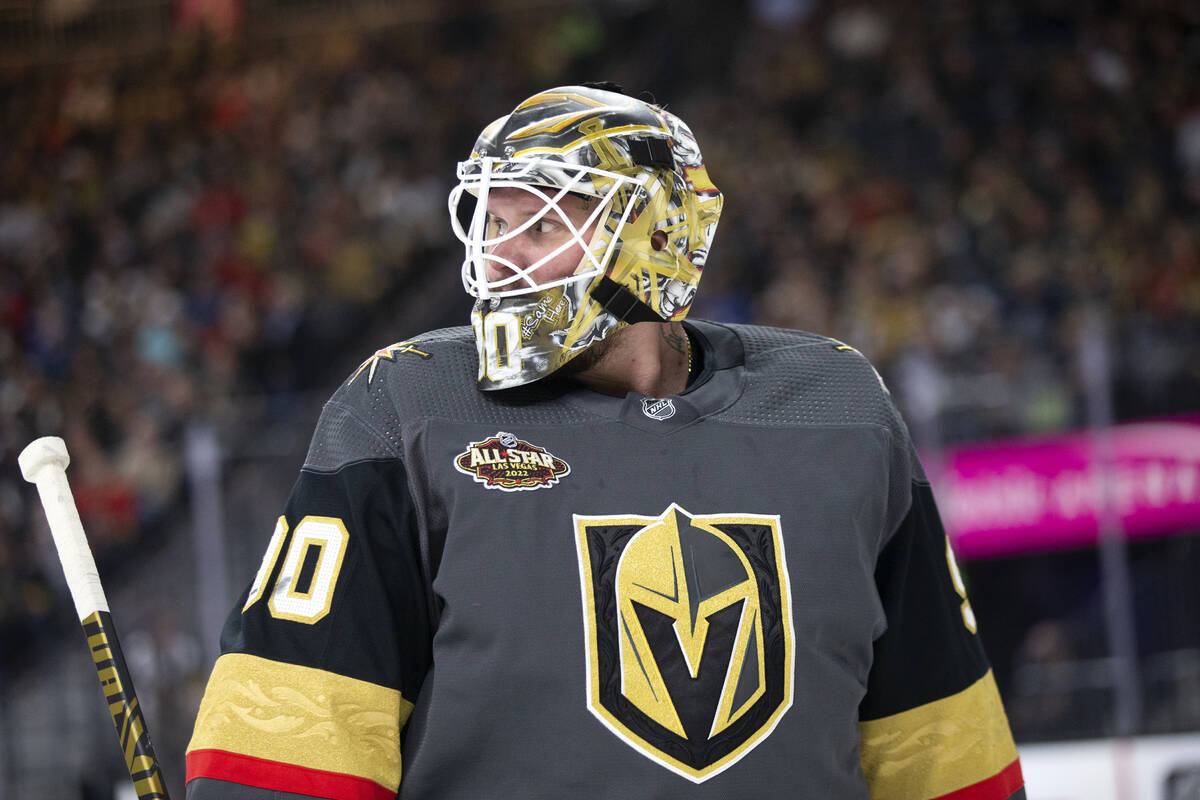 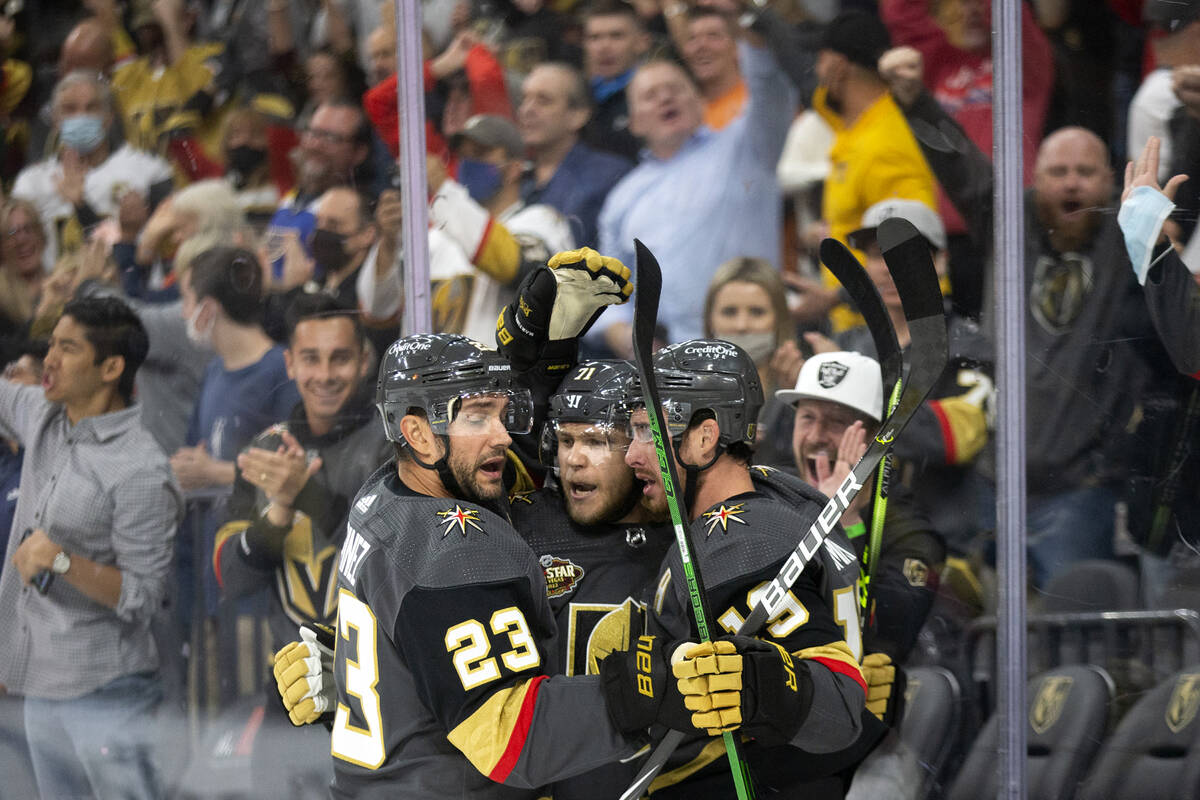 Golden Knights center William Karlsson (71) is congratulated by defenseman Alec Martinez (23) and right wing Reilly Smith (19), who assisted his goal, during the first period of an NHL hockey game against the Blues at T-Mobile Arena on Wednesday, Oct. 20, 2021 in Las Vegas. (Ellen Schmidt/Las Vegas Review-Journal) @ellenschmidttt 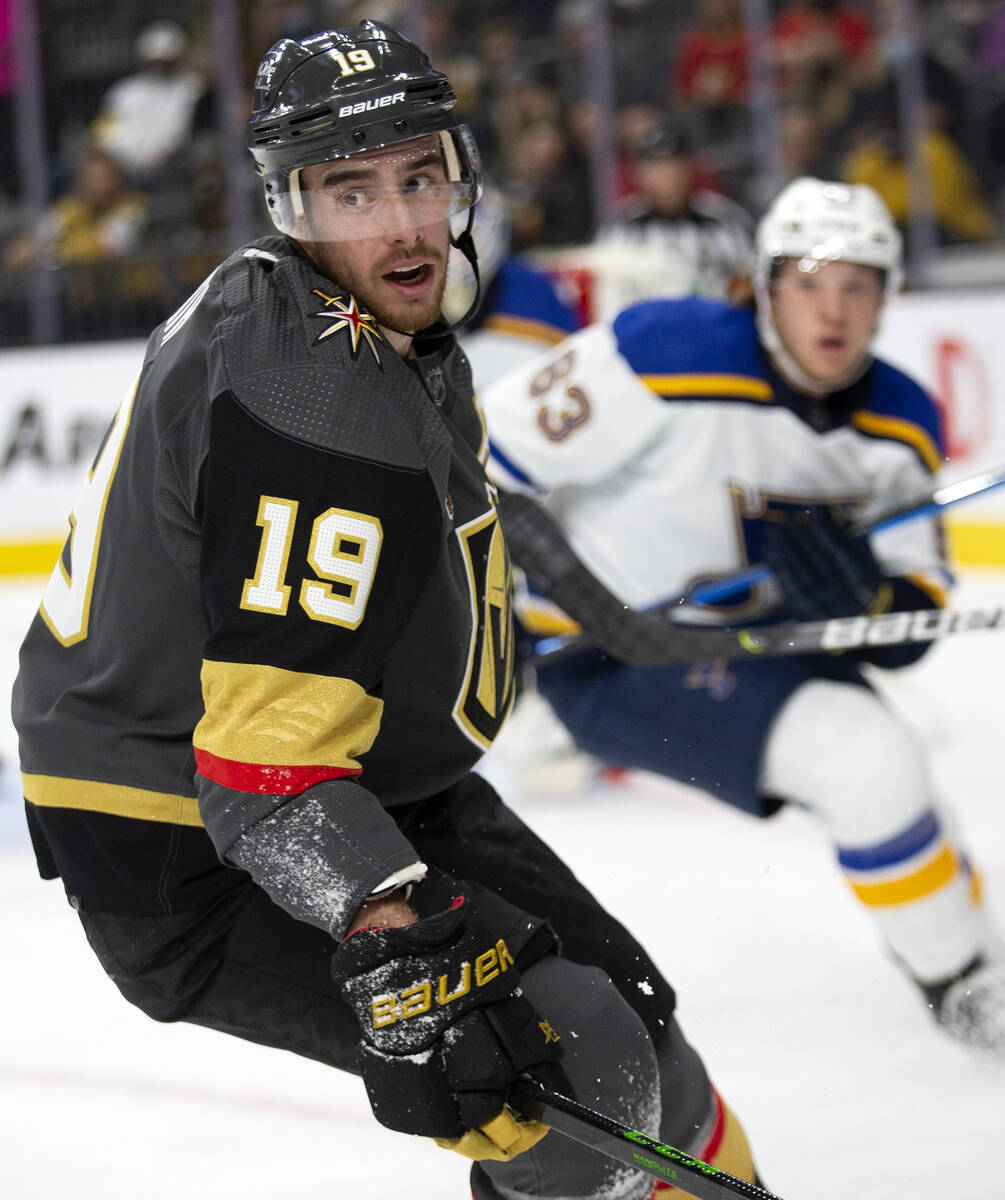 Adversity in sports isn’t a singular matter. It comes in all different shapes and hardships. You can’t always overcome it with the same strategy.

The Golden Knights, hardly a franchise that has been beset with great misfortune, has been given a small taste to begin their fifth season.

Better now than in April.

“For sure,” coach Pete DeBoer said.

The Knights that lost 3-1 to the Blues on Wednesday night before an announced gathering of 17,690 at T-Mobile Arena — um, there were plenty of empty seats, folks — are without their best player (Mark Stone) and best goal scorer (Max Pacioretty).

Both are out with injury — Pacioretty for several weeks and Stone indefinitely.

It’s professional sports. It’s not as if the Golden Knights have been totally healthy for long stretches throughout the last four years. But they have been so good and won so much that many of those bumps and bruises and strains and sprains have been camouflaged by all the success.

“I think, with our group, my history with them, when we’ve played a little bit scared of the situation or the opposition, we’ve responded,” DeBoer said.

There have been other disjointed and nervous times.

Like when DeBoer replaced Gerard Gallant in January 2020. Or when the Knights faced an elimination game in the first round of the playoffs against Minnesota last season. Or being down two goals in the third period of Game 5 in Colorado and rallying to win.

Marc-Andre Fleury missing 25 games in the inaugural 2017 season with a concussion. Nate Schmidt being suspended for 20 in 2018. Teams go through these sorts of things. The best ones rise above it.

“We sure won’t be having any ‘woe is me,’ type of attitude,” general manager Kelly McCrimmon said. “Teams win with (great players) short-handed. It heightens the importance of trusting your systems and provides opportunities for players that are going to get larger roles than what they would have if we were fully healthy.

It’s one thing to know the NHL more often than not produces one-goal games. Not as big a cushion to rely on. Not as big a margin of error for either side. Lots and lots of games like Wednesday’s.

But the Knights will be a much different team until Stone and Pacioretty return to their top line. They need to find scoring somewhere.

Maybe it comes more from defensemen. Maybe the bottom six. Maybe what was a top line Wednesday of William Karlsson and Reilly Smith and Jonathan Marchessault continues creating odd-man rushes as they did for a 1-0 lead and nearly a second early goal.

Maybe they get more nights such as the one goaltender Robin Lehner offered against the Blues.

It was probably a game Lehner needed to steal for the Knights to win. He’ll probably need to steal more than a few.

For most of Wednesday, he was the best player on the ice.

Lehner faced three Grade-A chances in the first five minutes alone. Faced 37 shots before the Blues put things away with an empty-netter. He was terrific.

“I’m excited to see how we handle all of this,” DeBoer said. “Every team is different. We could play our asses off and be .500 and might say we handled it well. Or we might be better than that. I don’t know. We’ll see what this group can do.”