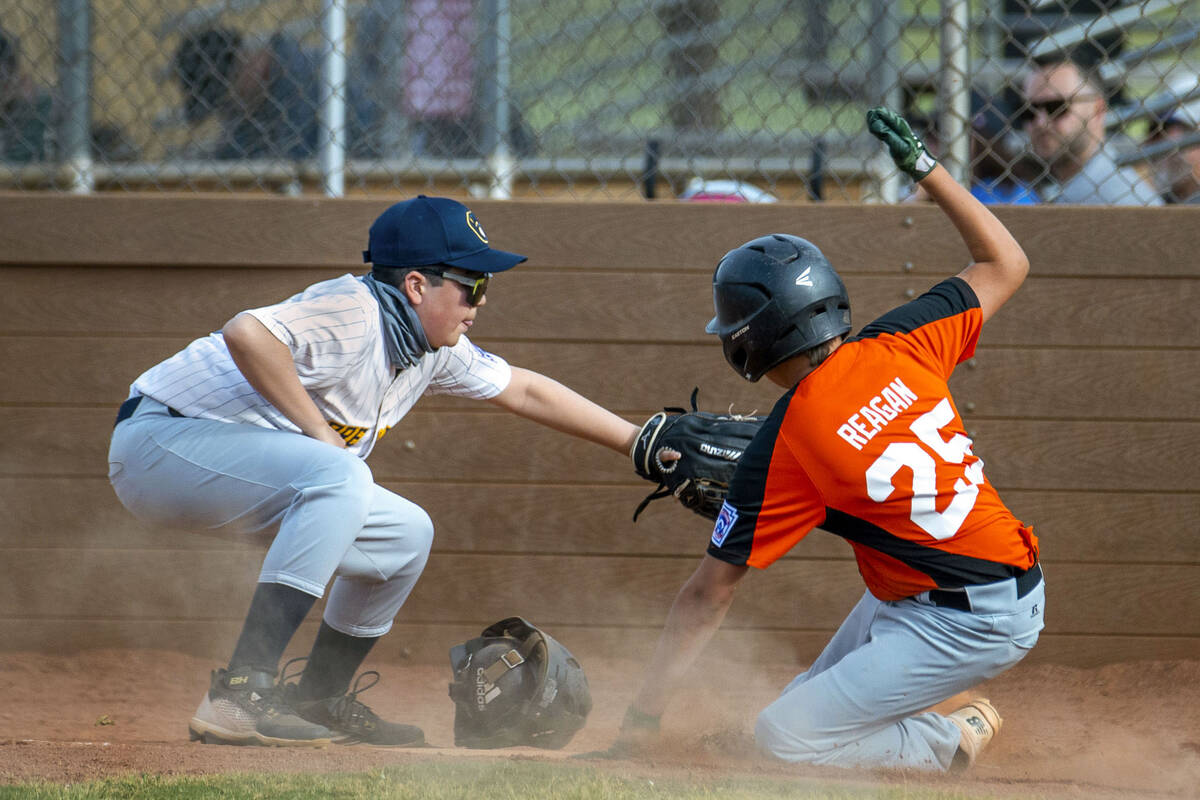 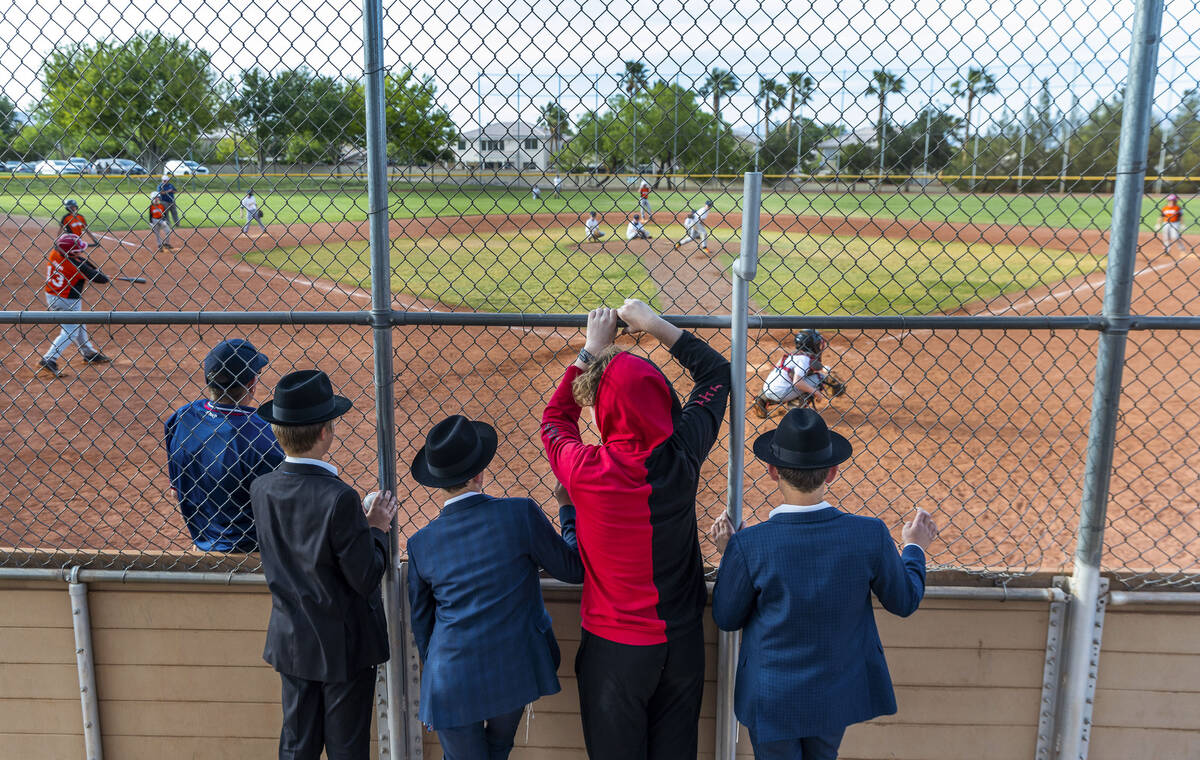 Boys watch the action from behind home plate as the Giants battle the Brewers for a Summerlin Little League North majors game at Trails Park Little League Fields on Saturday, May 7, 2022, in Las Vegas. (L.E. Baskow/Las Vegas Review-Journal) @Left_Eye_Images 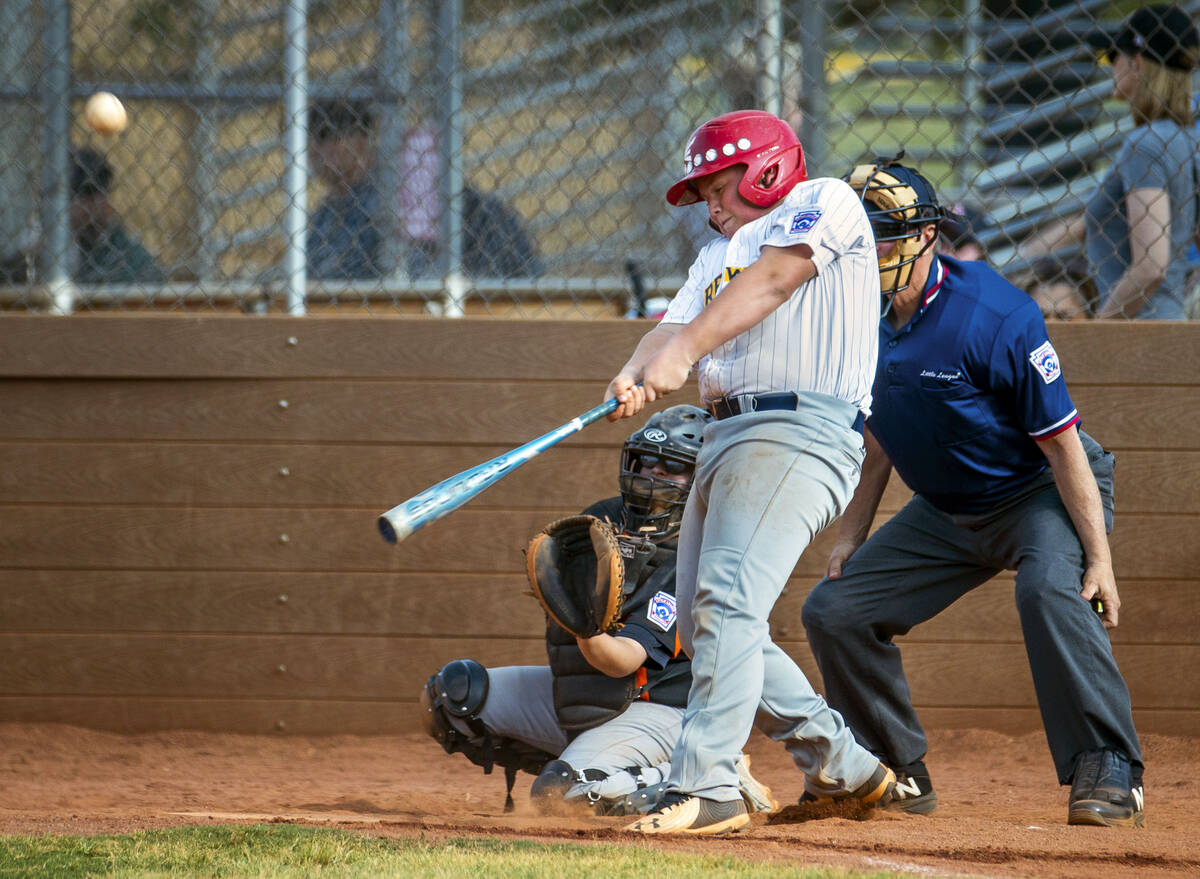 Brewers batter Jaxon Peace (13) connects with a throw from a Giants pitcher during a game versus the Brewers for a Summerlin Little League North majors game at Trails Park Little League Fields on Saturday, May 7, 2022, in Las Vegas. (L.E. Baskow/Las Vegas Review-Journal) @Left_Eye_Images 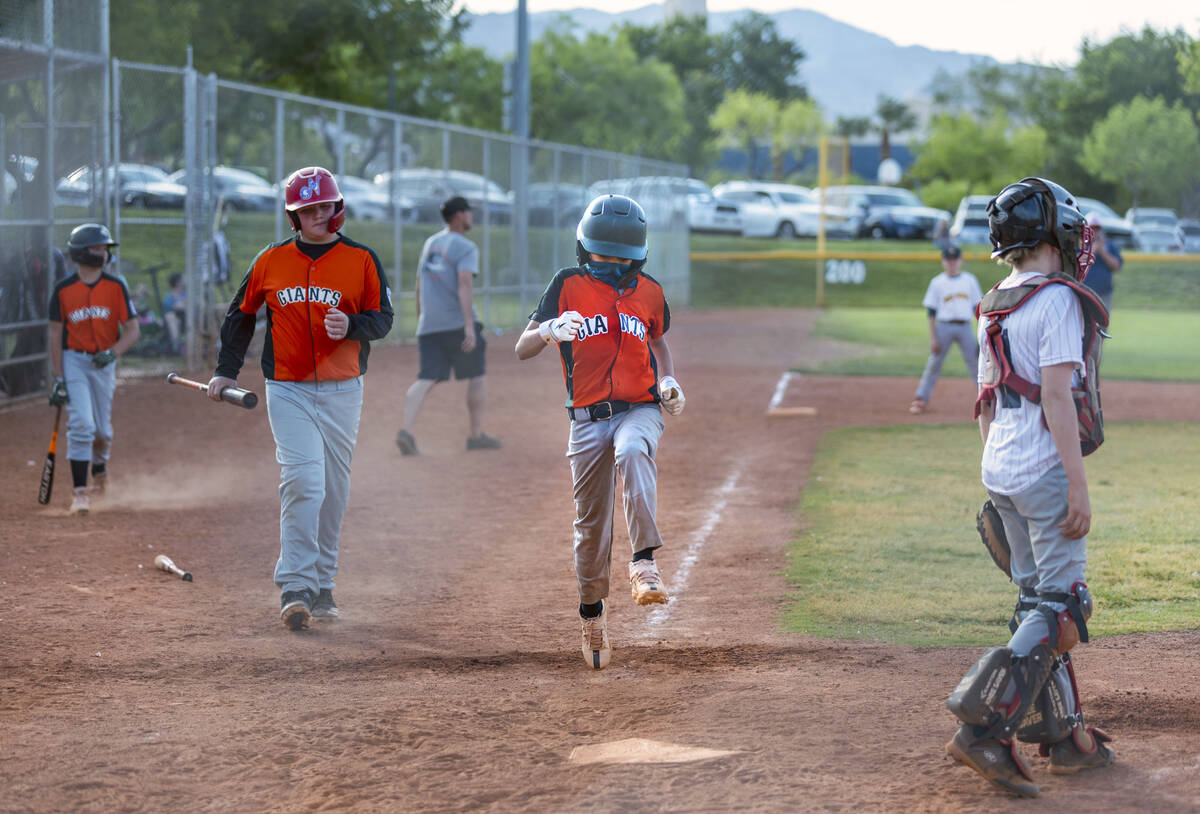 Giants runner Maximilian Lewis (24) jumps up as he is about to tag home plate and score a run during a game versus the Brewers for a Summerlin Little League North majors game at Trails Park Little League Fields on Saturday, May 7, 2022, in Las Vegas. (L.E. Baskow/Las Vegas Review-Journal) @Left_Eye_Images 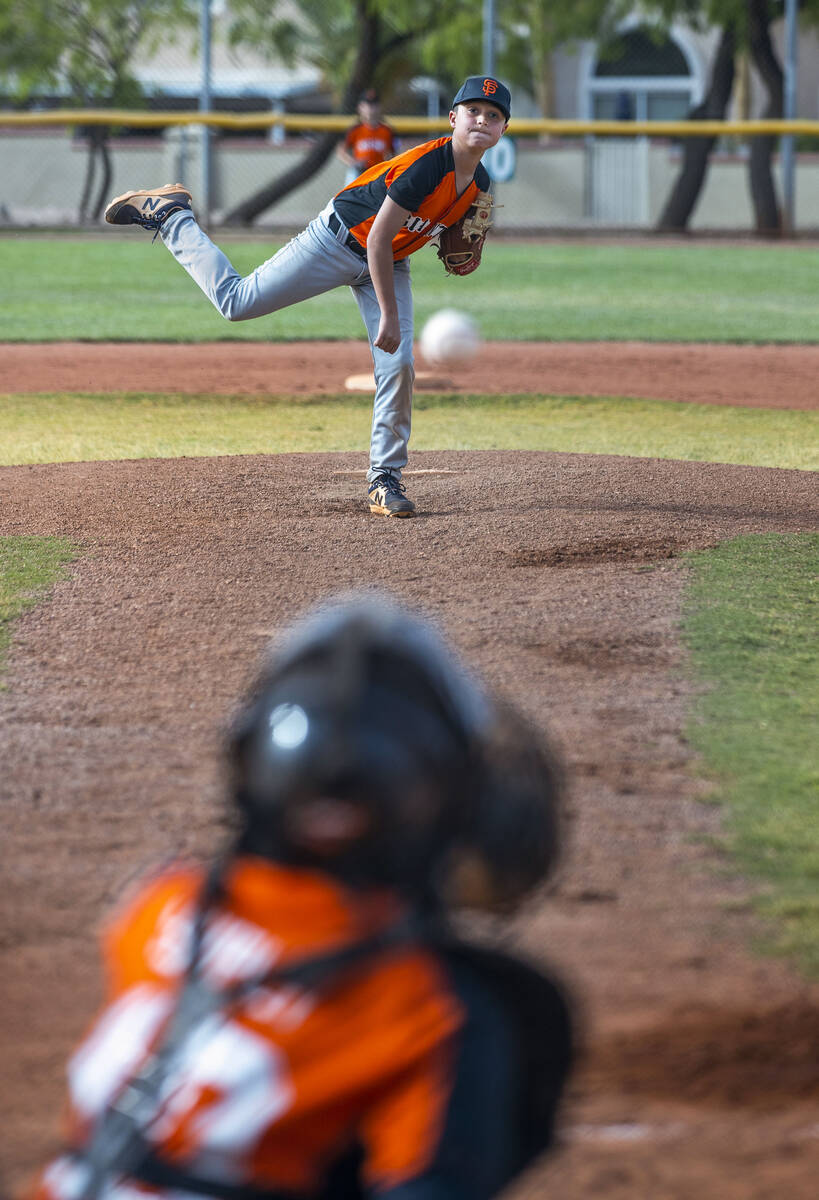 Giants pitcher Patrick Harris (9) throws a ball towards his catcher during a game versus the Brewers for a Summerlin Little League North majors game at Trails Park Little League Fields on Saturday, May 7, 2022, in Las Vegas. (L.E. Baskow/Las Vegas Review-Journal) @Left_Eye_Images 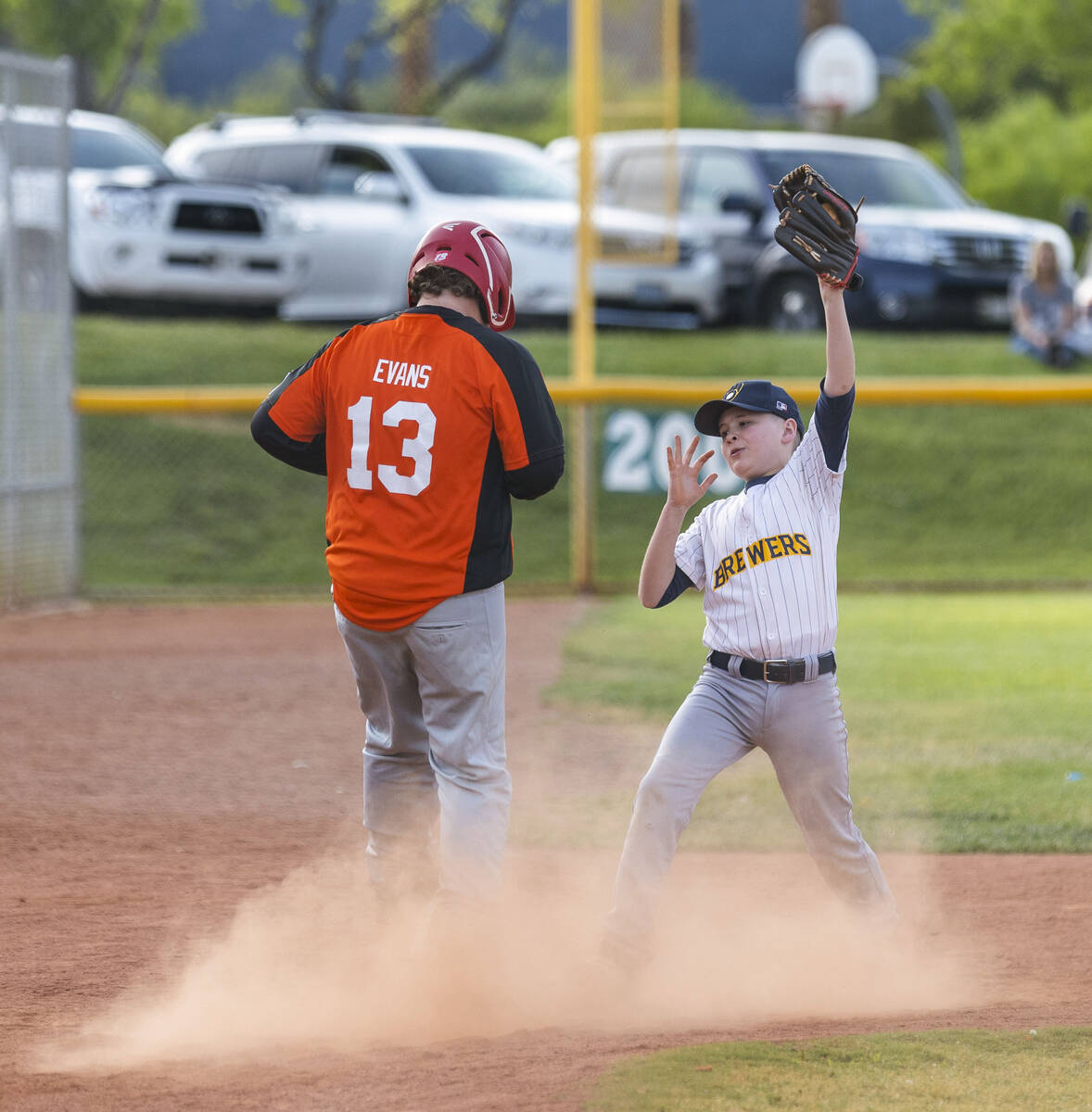 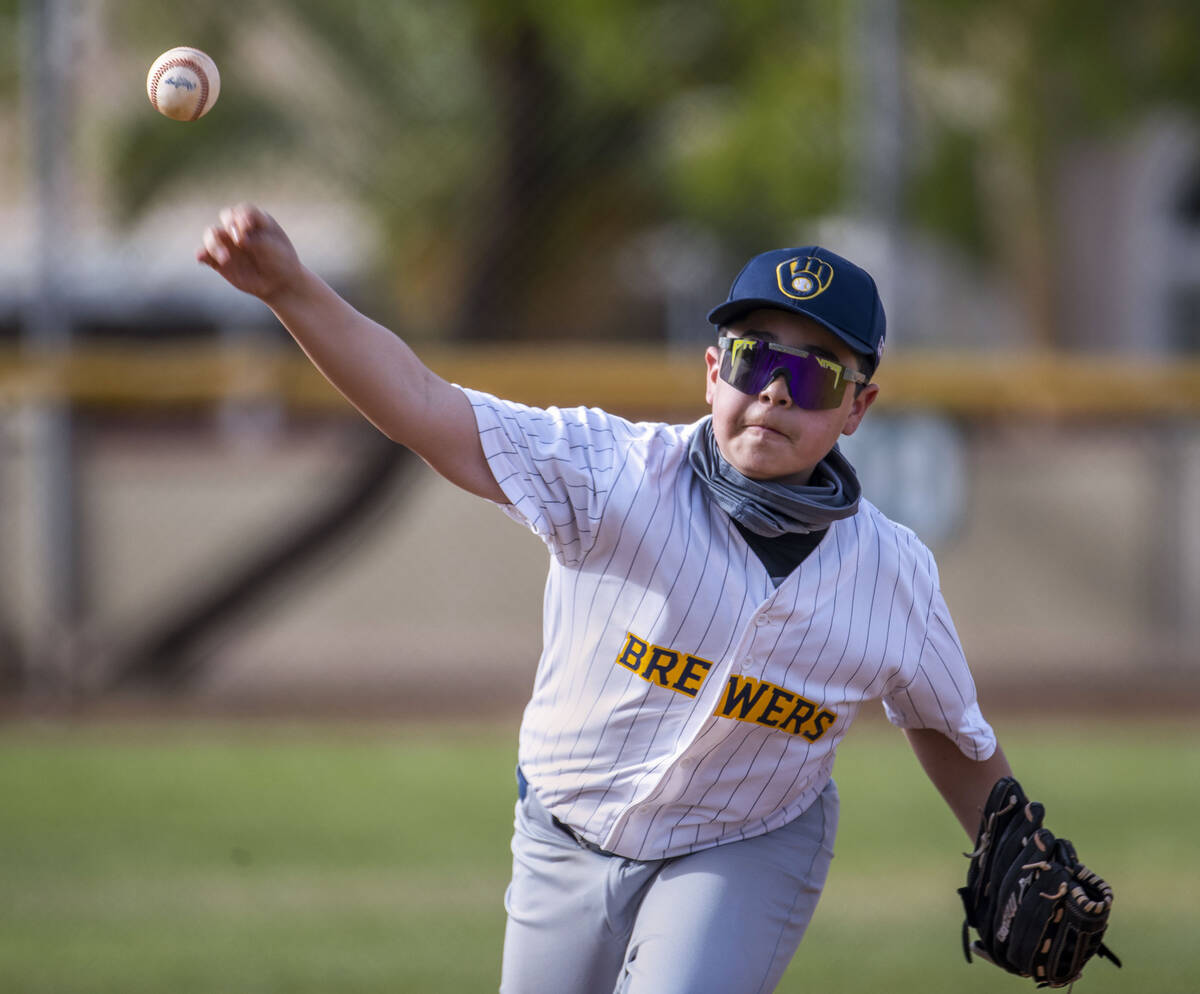 Brewers pitcher Andrew Kim (10) throws a ball towards the plate and a Giants batter during a game versus the Brewers for a Summerlin Little League North majors game at Trails Park Little League Fields on Saturday, May 7, 2022, in Las Vegas. (L.E. Baskow/Las Vegas Review-Journal) @Left_Eye_Images 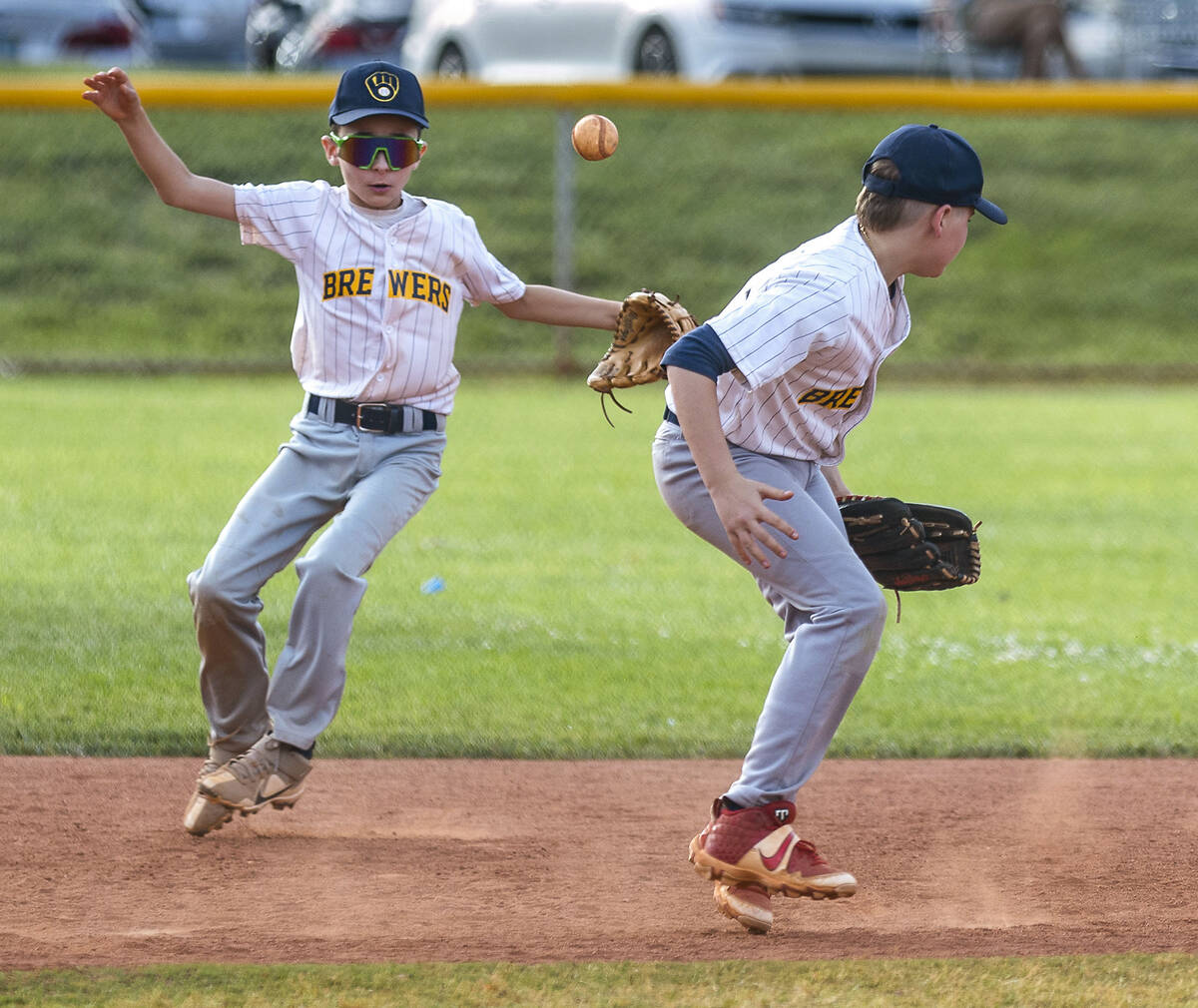 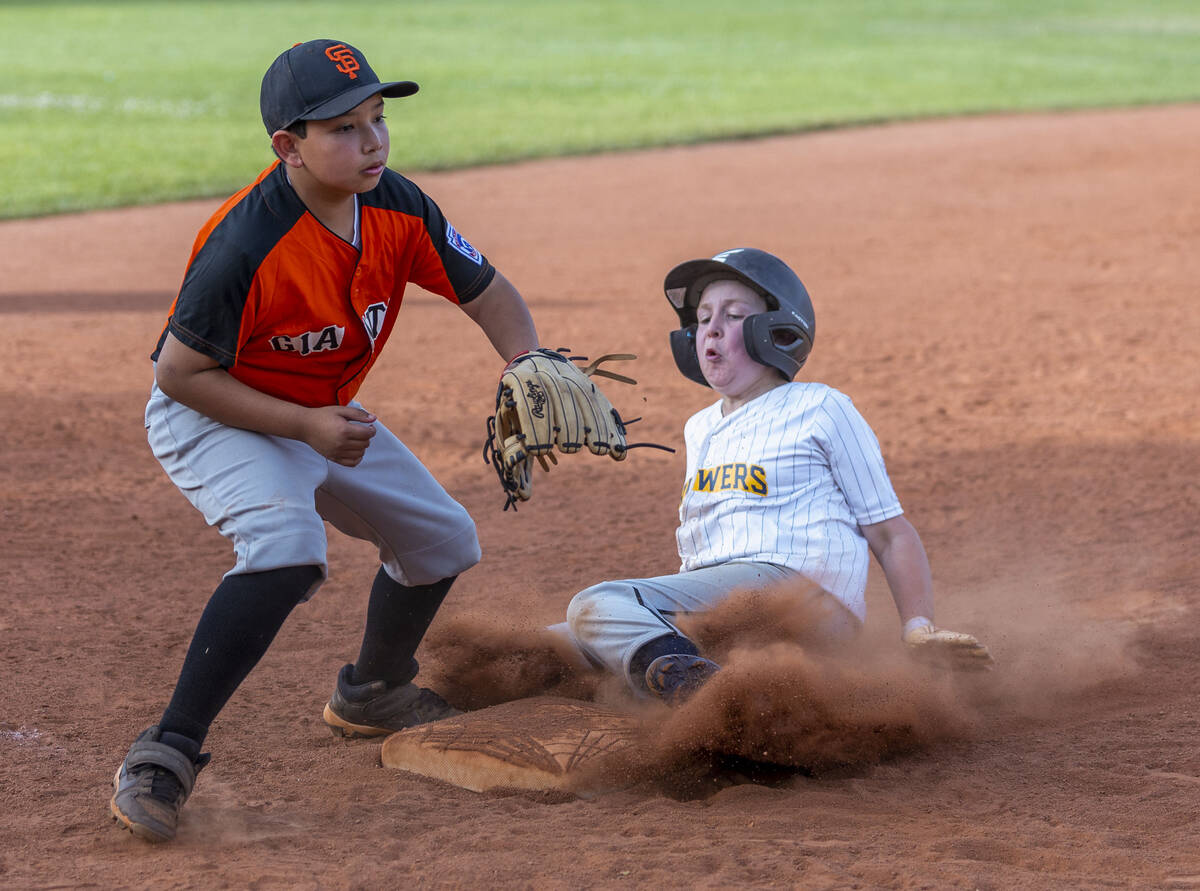 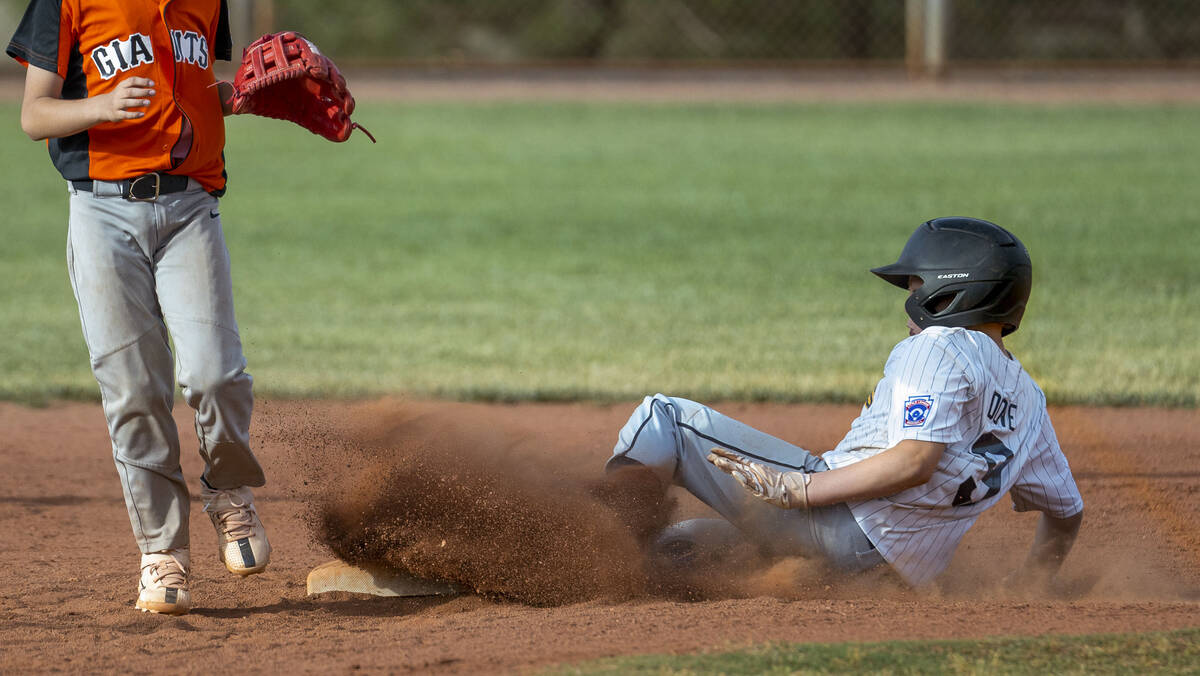 Brewers runner Miles Dove (9) slides safely into second base versus the Giants during a game versus the Brewers for a Summerlin Little League North majors game at Trails Park Little League Fields on Saturday, May 7, 2022, in Las Vegas. (L.E. Baskow/Las Vegas Review-Journal) @Left_Eye_Images 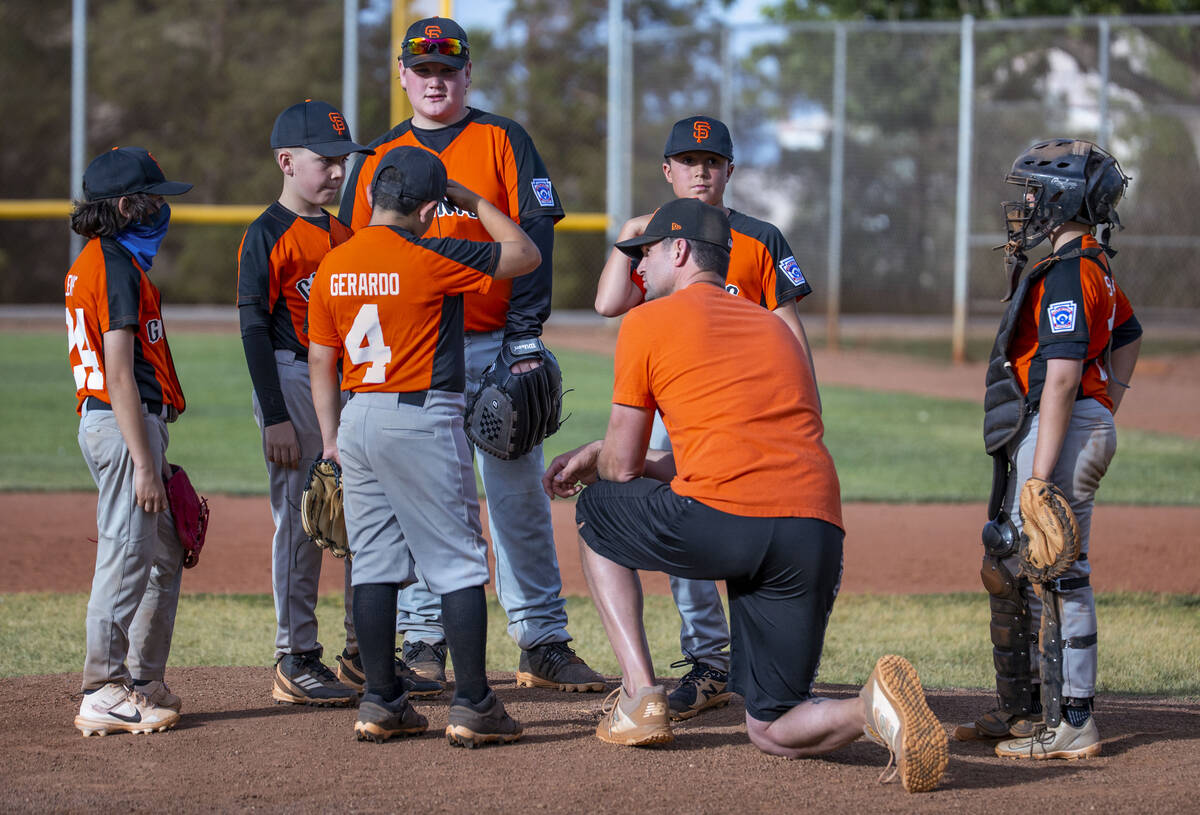 Giants head coach counsels his players on the pitcher’s mound during a game versus the Brewers for a Summerlin Little League North majors game at Trails Park Little League Fields on Saturday, May 7, 2022, in Las Vegas. (L.E. Baskow/Las Vegas Review-Journal) @Left_Eye_Images 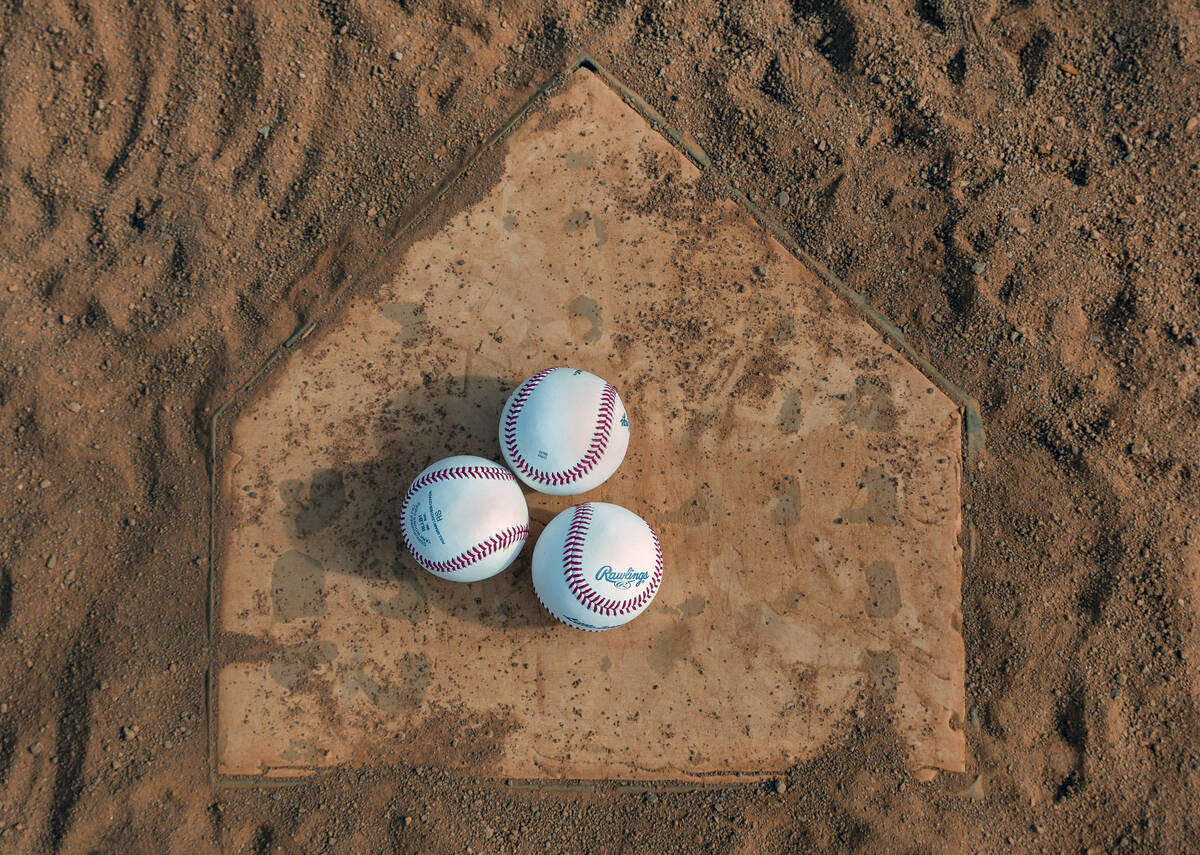 Baseballs are set on home plate as a game between the Brewers and Giants is due to start for a Summerlin Little League North majors game at Trails Park Little League Fields on Saturday, May 7, 2022, in Las Vegas. (L.E. Baskow/Las Vegas Review-Journal) @Left_Eye_Images 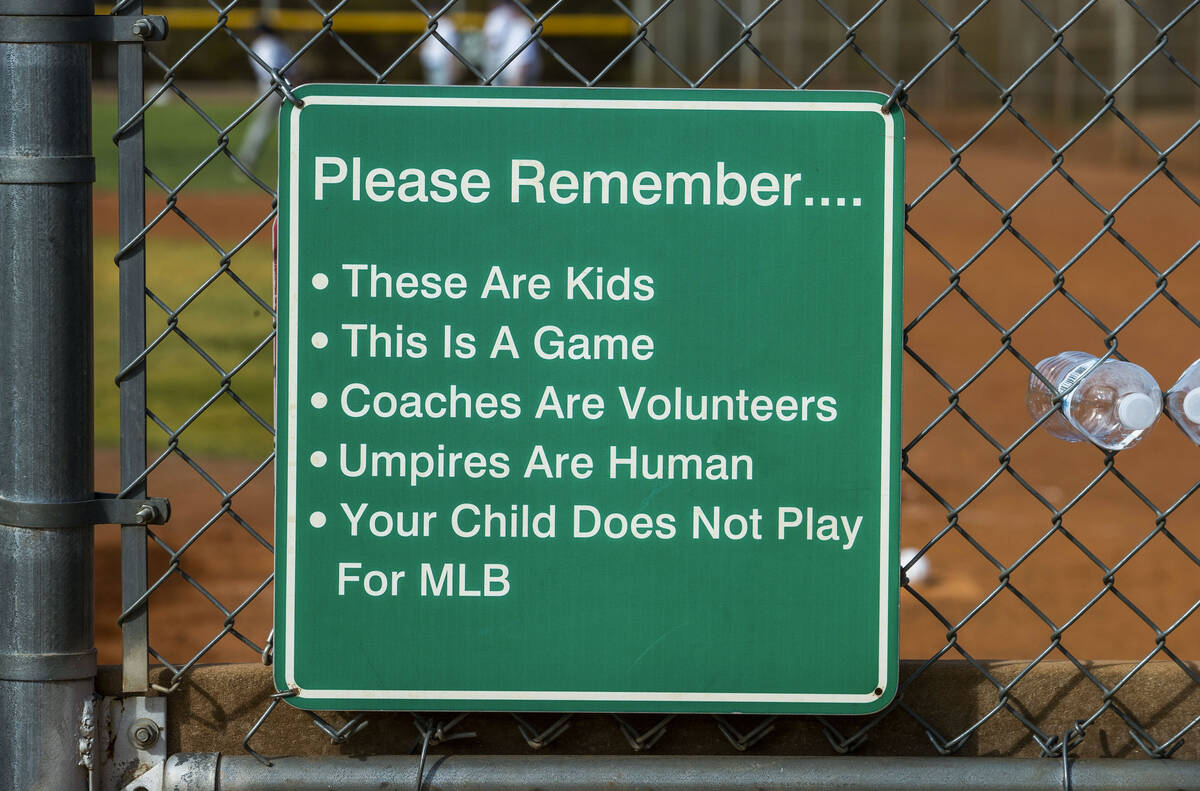 A sign on the diamond fence as a game between the Brewers and Giants is due to start for a Summerlin Little League North majors game at Trails Park Little League Fields on Saturday, May 7, 2022, in Las Vegas. (L.E. Baskow/Las Vegas Review-Journal) @Left_Eye_Images

The sweet smell of barbecue wafts over from an adjacent park. Parents ready their phones to record every last swing. Two teams of 11- and 12-year-olds warm up with some long toss on opposite ends of an outfield grass.

Hot dogs the size of Monaco are consumed.

It’s a big game between the Giants and Brewers.

Siblings whiz by on scooters and bikes.

It’s also a lifetime, really, from crowds in excess of 40,000 and the $60 million TV contract with ESPN and the corporate giant that long ago became the Little League World Series in South Williamsport, Pennsylvania.

A universe between now and 1938, when the first league was formed just south of the complex that annually hosts the best Little Leaguers in the world.

Nope. This is another weekend at Summerlin North.

There is a place

“A kid can still come up to the snack shack with $1 and he has a choice,” said Julie Leppelmeier, the league’s player agent. “I love that. That’s never going to change.”

It’s here. Trust me. And that’s difficult for some when they have seen the worst of youth baseball, which absolutely exists at this level and higher ones.

But there is still very much a place for Little League, binding neighborhoods and families together in ways that travel teams do not. These communal gatherings aren’t totally vanishing. Just a lot fewer of them.

It’s true that Little League’s enrollment has declined by nearly 20 percent from the late 1990s, mostly the result of kids playing other sports and the flood of club/travel teams.

Seriously. There are still those out there who believe in Little League’s stated mission of youth development and leadership and focusing on turning kids into positive social adults.

At being available to all and developing their confidence.

Maybe such numbers of folks are dwindling, too. But there are also those trying like anything to keep such a purpose alive.

“It just happens,” said Jeff Quinn, president of Summerlin North Little League, “that we also play baseball. We try and maintain the energy that it has always been. The kind you and I remember. We do a pretty decent job reminding ourselves this is Little League.

“If you want competitive ball, and you feel your kid is ready for where it’s about nothing but baseball and winning, then go and explore club and travel.”

Things aren’t as innocent anymore. Won’t ever be again. Doesn’t mean the fun has totally disappeared.

There are about 20 percent of Summerlin North players who also participate in club ball, a main drive of competing in a Majors Division of Little League to make a summer All-Star team that has dreams of reaching Williamsport.

It’s the same at Little Leagues all across the state and nation. There is no goal like that of a trip to the World Series. It’s also a gargantuan task.

It happened for Mountain Ridge in 2014, the first team in Nevada history to make the Little League World Series, to stand atop that renowned hill and stare down at the baseball shrine that is Howard J. Lamade Stadium.

Mountain Ridge reached the U.S. championship game, lost to a Chicago team and was later awarded the title when it was discovered that Jackie Robinson West had used players outside its designated geographic area.

Yeah. That still happens, too.

“My youngest son is 8 now and plays Little League and has a great time because it’s just fun,” said Ashton Cave, who managed that special Mountain Ridge team. “He’s playing against his cousin and kids he goes to church with and school.

“I still think the (basic premise) of Little League exists. I know it has been dissolved in certain areas. If you don’t have the community involvement, it fails. But if you have good parents, a good support system, good volunteers all the way around, then that fun can exist along with the purpose of Little League.”

He brings up a critical point to all of this: Parents still have the power to champion their children or ruin the experience for them.

Take your pick. There are countless examples on both sides of the base paths. The more competitive things become, the more they interfere. Not all of them. Perhaps not even a majority of them. But it still happens.

The Brewers, on this particular day, beat the Giants 12-9. One parent, Matt Evans, as positive as you will find at a Little League game, brought back memories of sounds heard on those small diamonds throughout communities across the country …

“A little quicker with that swing, kid!”

“That will let him come home tonight.”

He was kidding with that last one. No, really.

“You get to have fun with your boys,” said Evans’ son, 11-year-old Matthew, first baseman for the Giants. “You get to play ball and do awesome stuff on the field and have bragging rights to your friends. Every time I get ready for a game, I think we’re gong to do great out there on the field. It’s amazing being able to talk with (friends), to connect with them …

“And one day, maybe even go to Major League Baseball with them.”

Believe me. There is still a place for Little League.

Just not as many, is all.

Doesn’t take away from those who still get it.

They’re out there. You just have to look a little closer.

Start at the snack shack with your $1 and go from there.