Running back Peyton Barber has stepped up in his short time with the Raiders and notched a career-high 111 yards and a touchdown in the team's 31-28 overtime win versus the Dolphins. (Cassie Soto/Las Vegas Review-Journal) 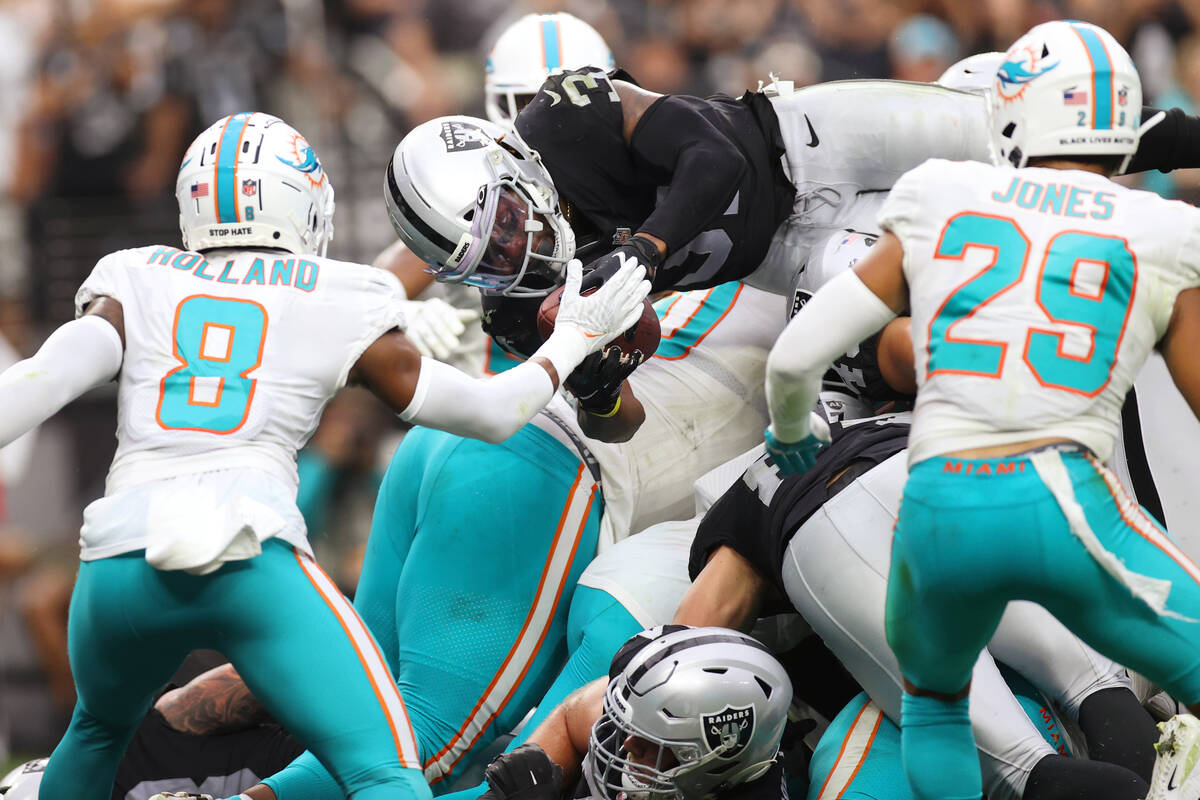 Las Vegas Raiders running back Peyton Barber (31) leaps for a touchdown in the second half of an NFL football game against the Miami Dolphins at Allegiant Stadium in Las Vegas, Sunday, Sept. 26, 2021. (Erik Verduzco / Las Vegas Review-Journal) @Erik_Verduzco 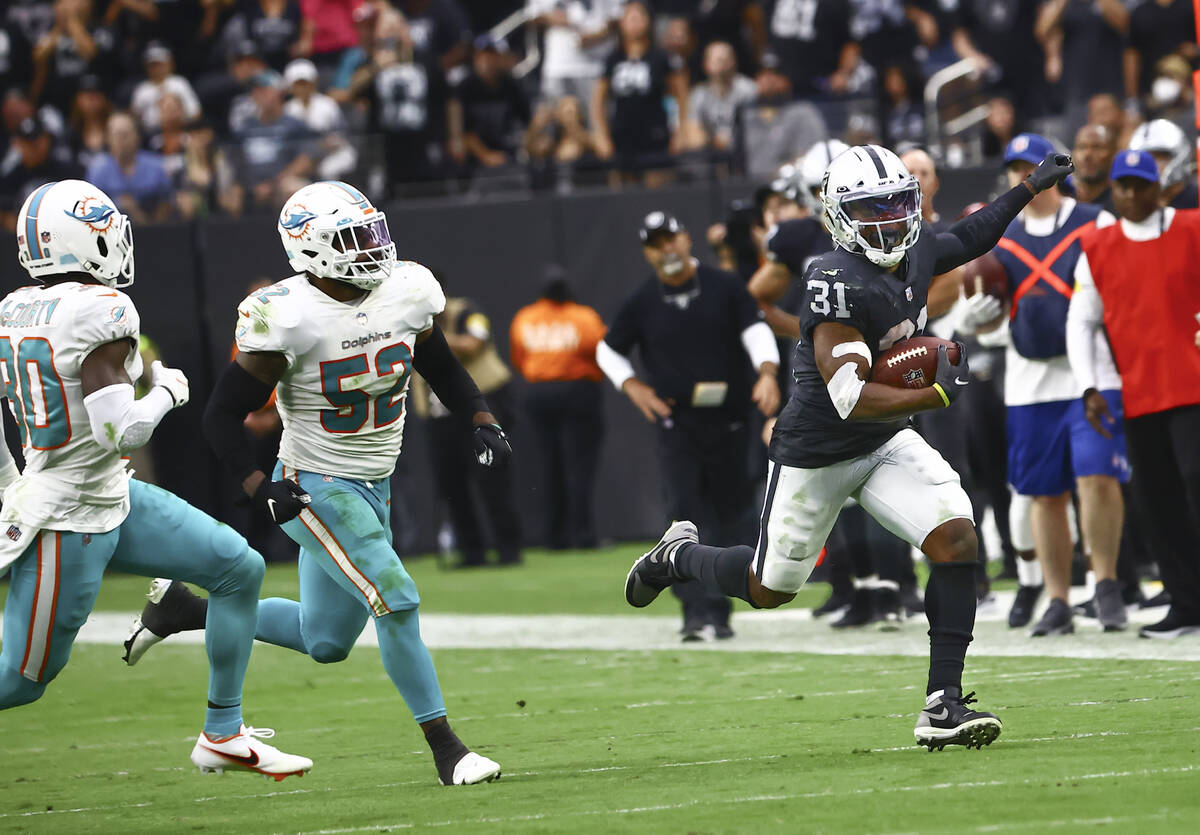 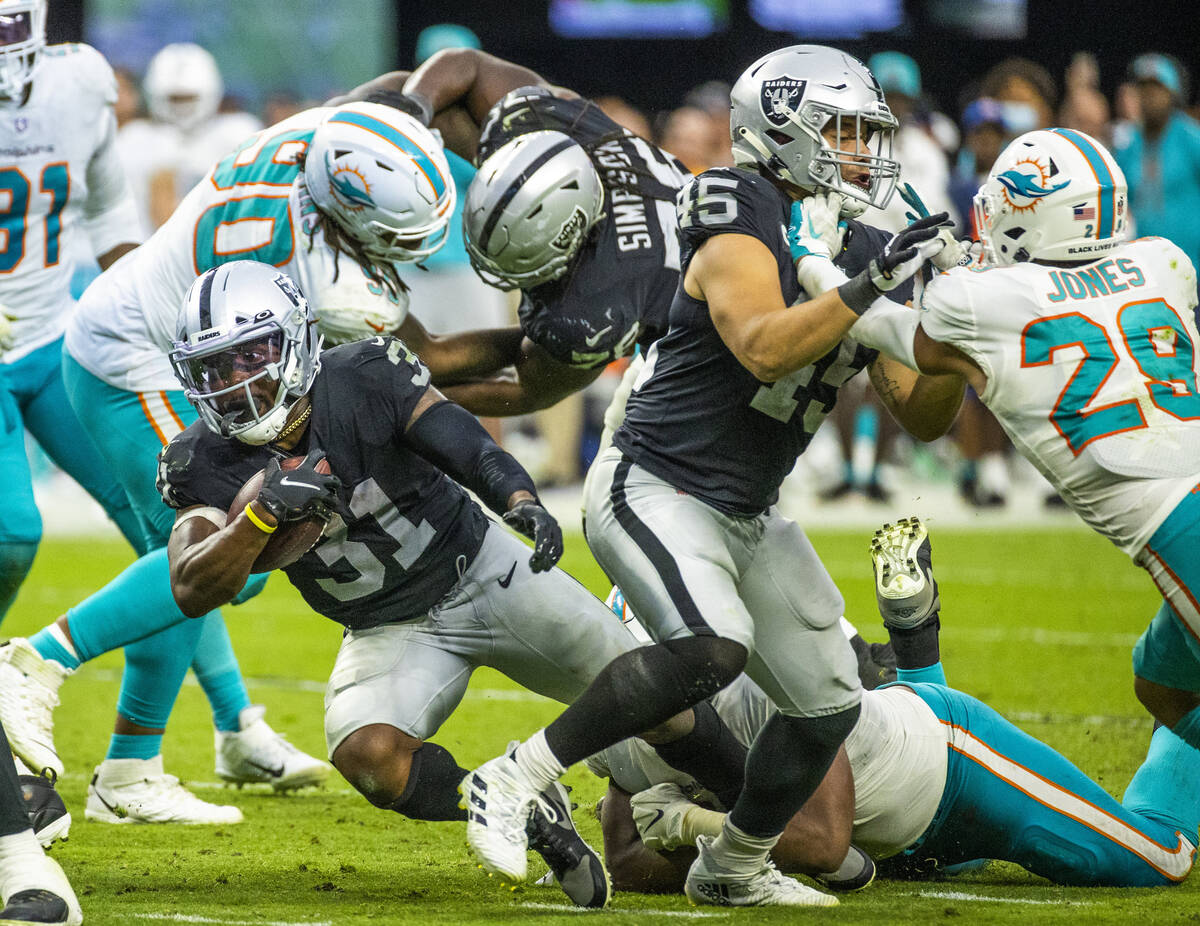 Las Vegas Raiders running back Peyton Barber (31) eyes the end zone on a run past Miami Dolphins defenders in the overtime period of their NFL game at Allegiant Stadium on Sunday, Sept. 26, 2021, in Las Vegas. (L.E. Baskow/Las Vegas Review-Journal) @Left_Eye_Images

The run came off right guard and went for 27 yards. Not like Peyton Barber hasn’t had longer or more dramatic ones.

Not like he hasn’t been there, done that, moved the chains.

But there was no bigger play for the Raiders on Sunday, as the sixth-year running back helped take control of things when they mattered most just weeks after signing with the team.

The Raiders scaled a small but significant hurdle with a 31-28 overtime victory against Miami before 59,311 at Allegiant Stadium.

They began three of the last five years with a 2-0 record. This is the first time they reached 3-0.

It’s actually the first time since 2002, so let that humdinger of a stat sink in for a second.

Barber assuredly did his part in this latest win by rushing 23 times for a career-high 111 yards and a score. Starting running back Josh Jacobs missed his second straight game with a bum ankle. Someone had to step up.

Barber instead took a few giant leaps forward, one being into the end zone with 13:47 left in regulation to help increase the lead to 25-14.

“He’s a pro,” Raiders quarterback Derek Carr said. “I’m breaking the huddle and telling him, ‘It’s this or this.’ This offense is hard enough to learn if you sign here or are drafted here, let alone to show up and it’s like, ‘Here, you have to play.’ He was unbelievable.”

Said wide receiver Hunter Renfrow: “Peyton is still discovering who he is with us.”

Barber was signed off the practice squad of the Washington Football Team on Sept. 4, a player who spent the first four years of his career with Tampa Bay. He actually started all 16 games for the Buccaneers in 2018, when he rushed for a career-best 891 yards.

He did a bit of everything Sunday. Ran hard. Caught three passes for 31 yards. Picked up blitzes. Didn’t blow assignments. Went off right guard for 27 when winning was at stake.

“It has been kind of a crazy roller coaster,” Barber said. “I wasn’t sure where I would be after getting cut and (signed to the practice squad in Washington). But the coaches here believed in me. I love playing for Coach (Jon) Gruden. He has been very honest with me — just be ready when your number is called.”

Here’s what made his effort even more impressive: The offensive line for long stretches couldn’t block me.

There is no way around it. Those up front, rebuilt and hurting, are having a tough time of it. Gruden isn’t a fan of many analytical numbers, but there is no hiding the fact that Pro Football Focus offered these pregame ratings:

The line — sans Miller — hasn’t been good at all, and yet the Raiders are still finding ways to win. They did so Sunday when a backup running back signed to the team three weeks ago got loose in Miami territory and advanced the ball to the 19.

Six plays later, including three more runs from Barber, the Raiders won via a 22-yard field goal from Daniel Carlson.

“I don’t apologize for winning games, no matter how we win them,” Gruden said. “We had a need, and Barber was there. When you meet him, he doesn’t say anything. He doesn’t smile. I don’t know what he’s feeling. I hardly know this guy.

I’ll tell you what: Barber helped save the Raiders from being 2-1.

There is a lesson here. Not all 27-yard gains are created equal.