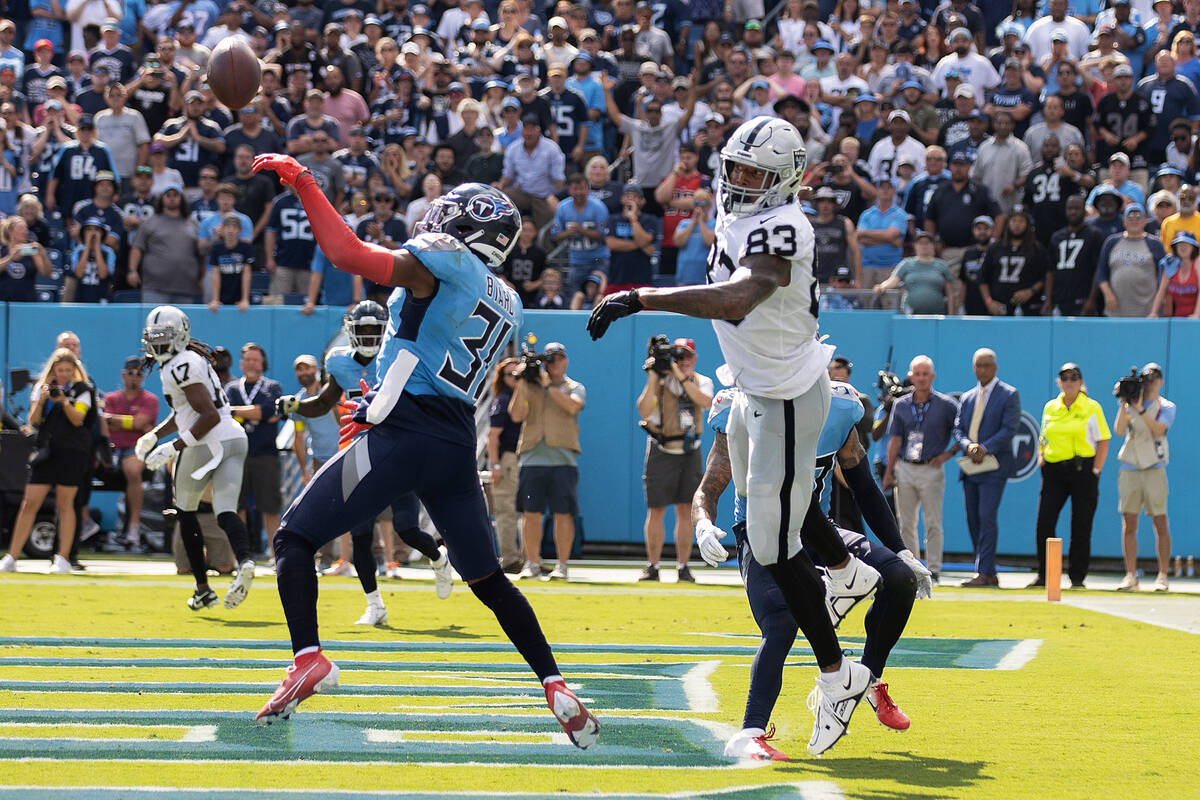 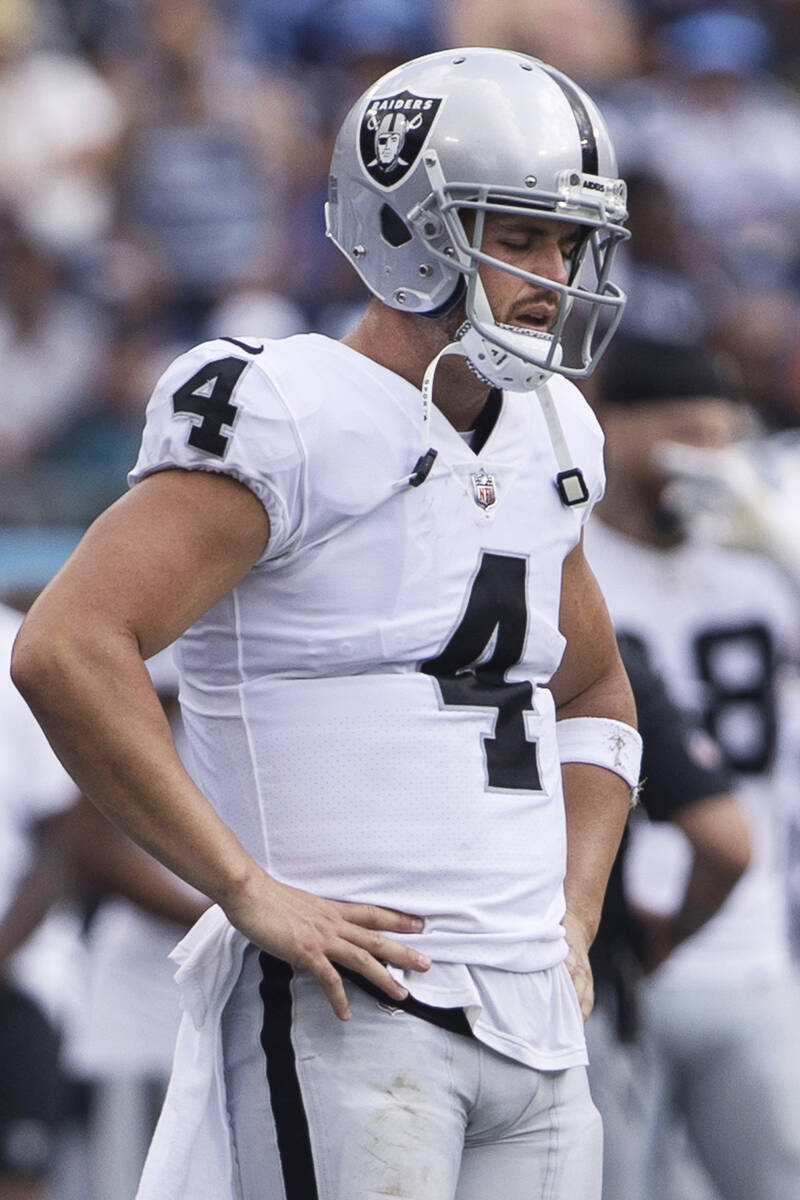 Raiders quarterback Derek Carr (4) stands on the sideline in contemplation during the second half of an NFL game against the Tennessee Titans at Nissan Stadium on Sunday, Sept. 25, 2022, in Nashville, Tenn. (Heidi Fang/Las Vegas Review-Journal) @HeidiFang 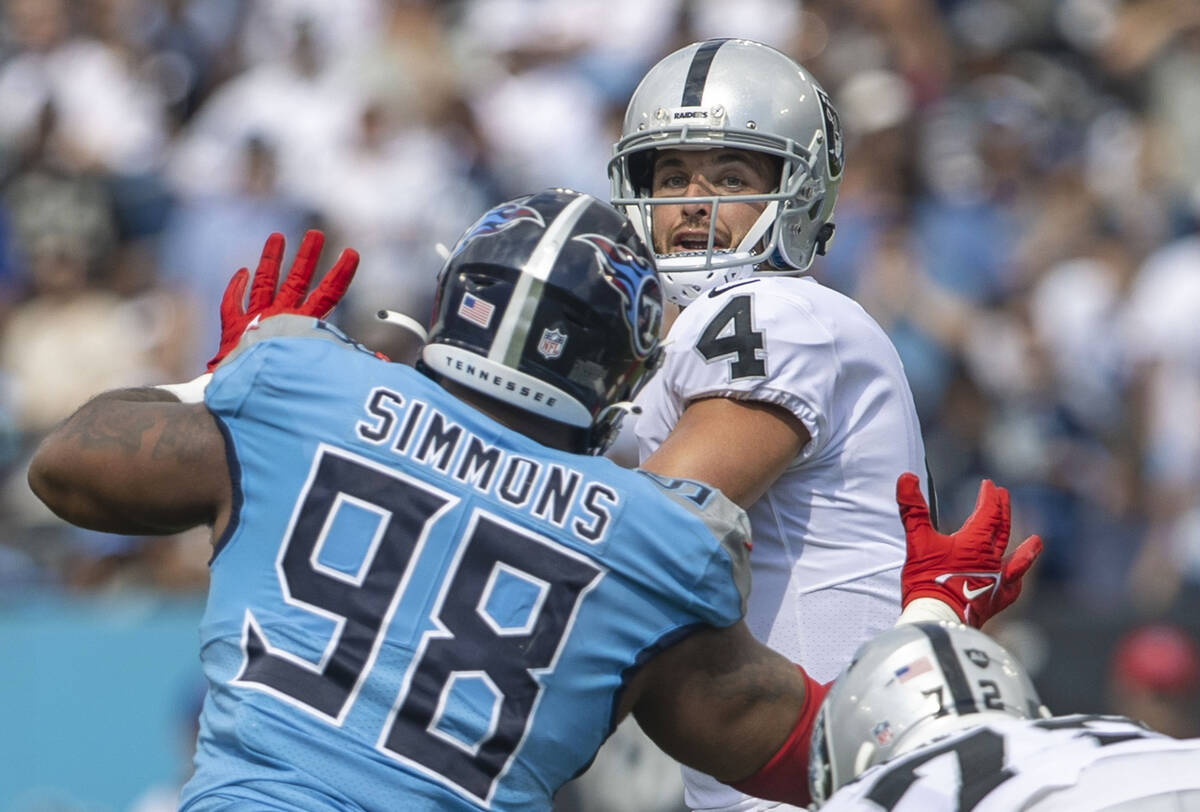 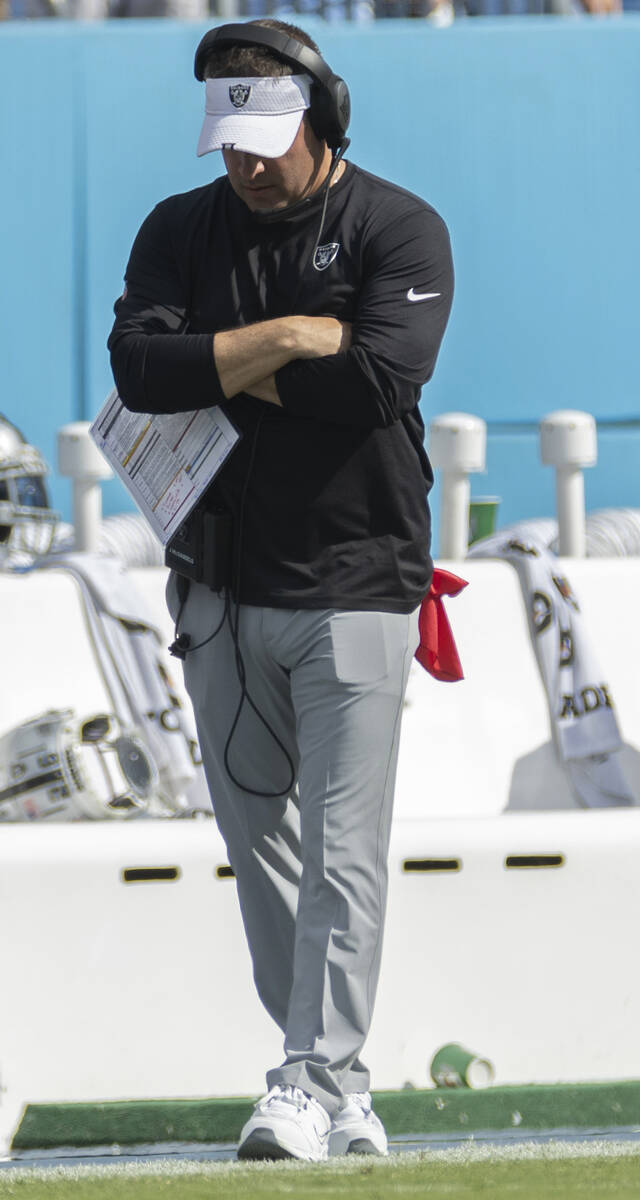 Raiders head coach Josh McDaniels walks the sidelines in the second half during an NFL football game against the Tennessee Titans on Sunday, Sept. 25, 2022, at Nissan Stadium, in Nashville, Tenn. (Benjamin Hager/Las Vegas Review-Journal) @benjaminhphoto 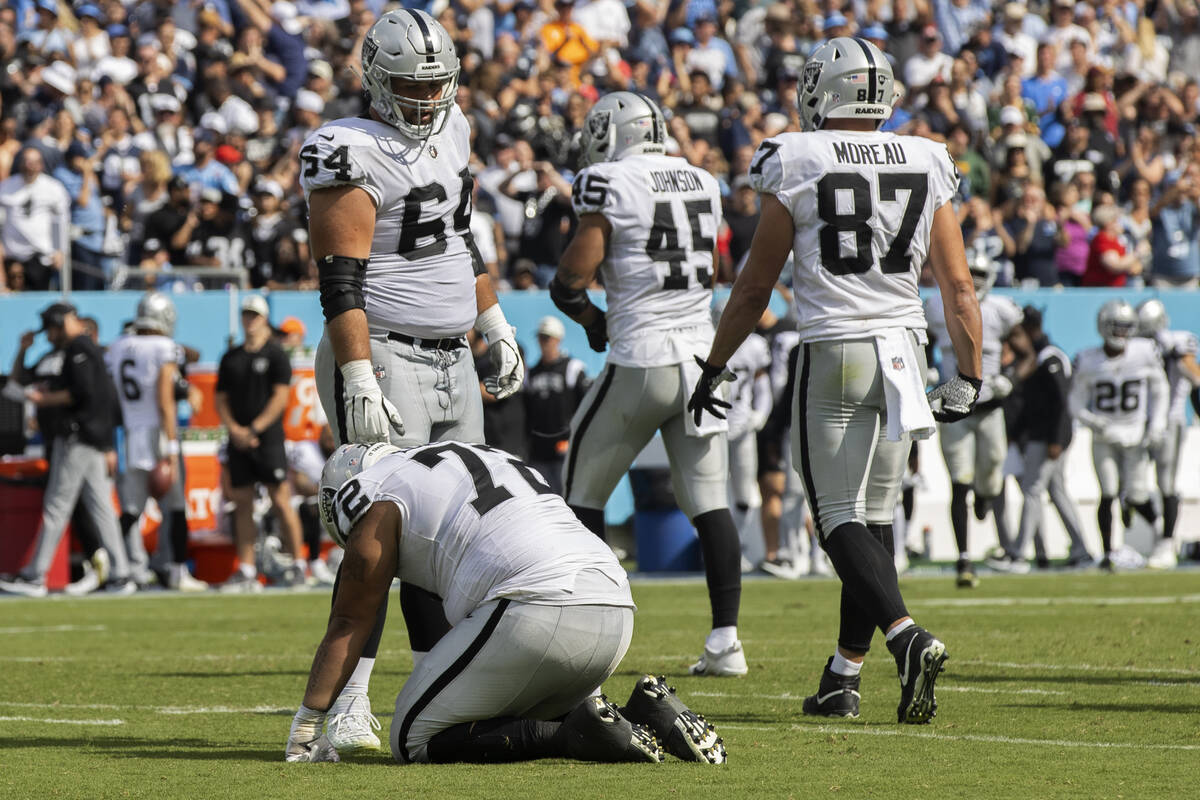 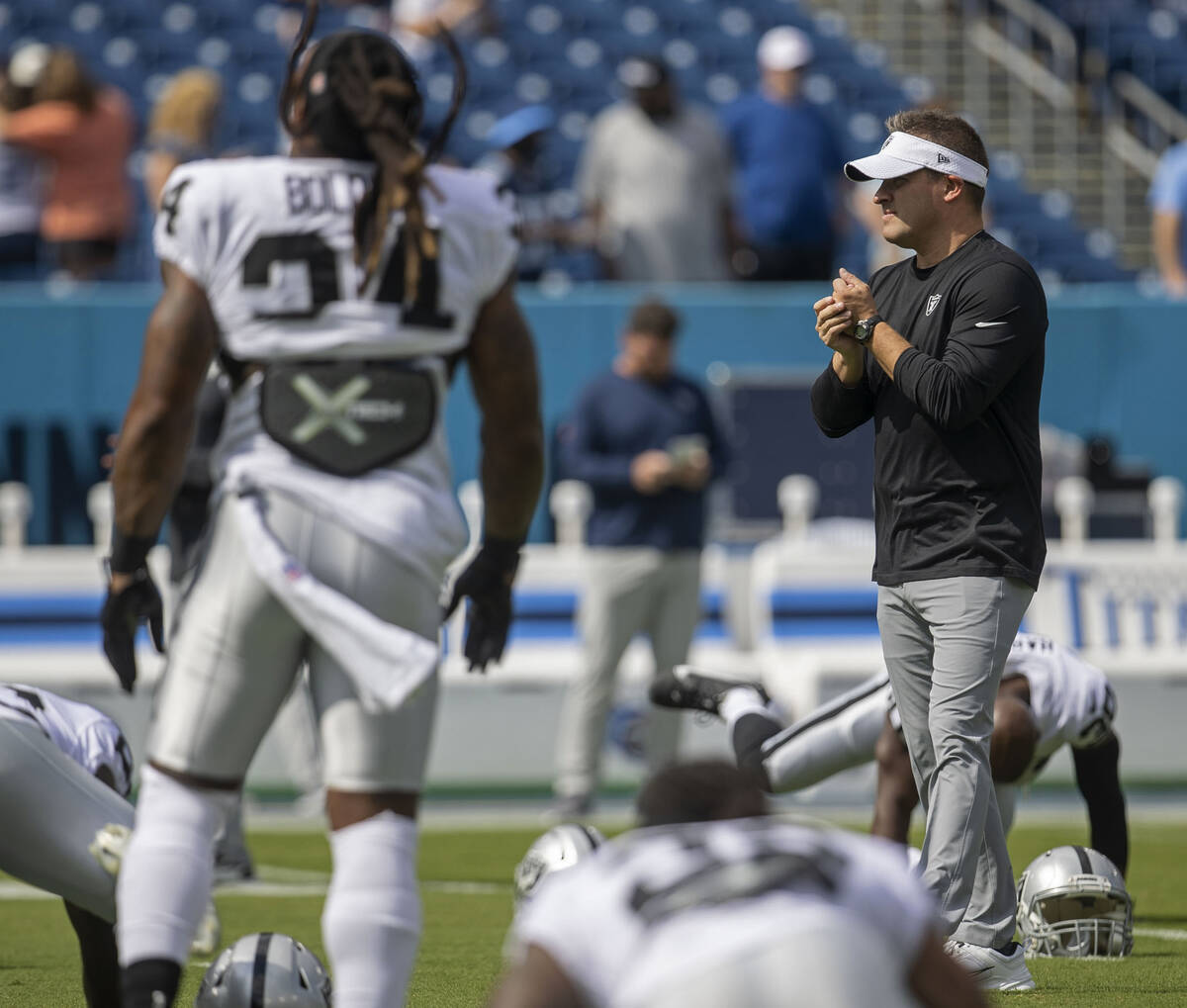 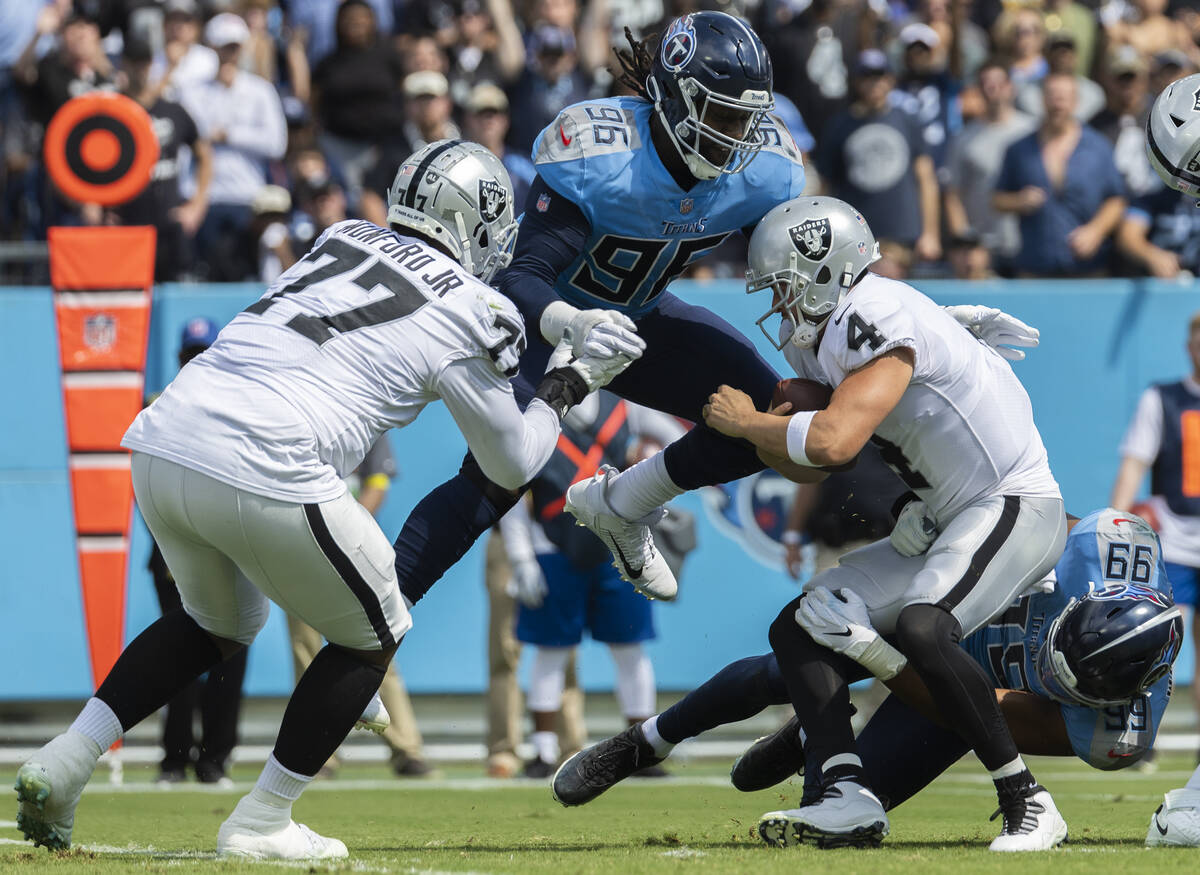 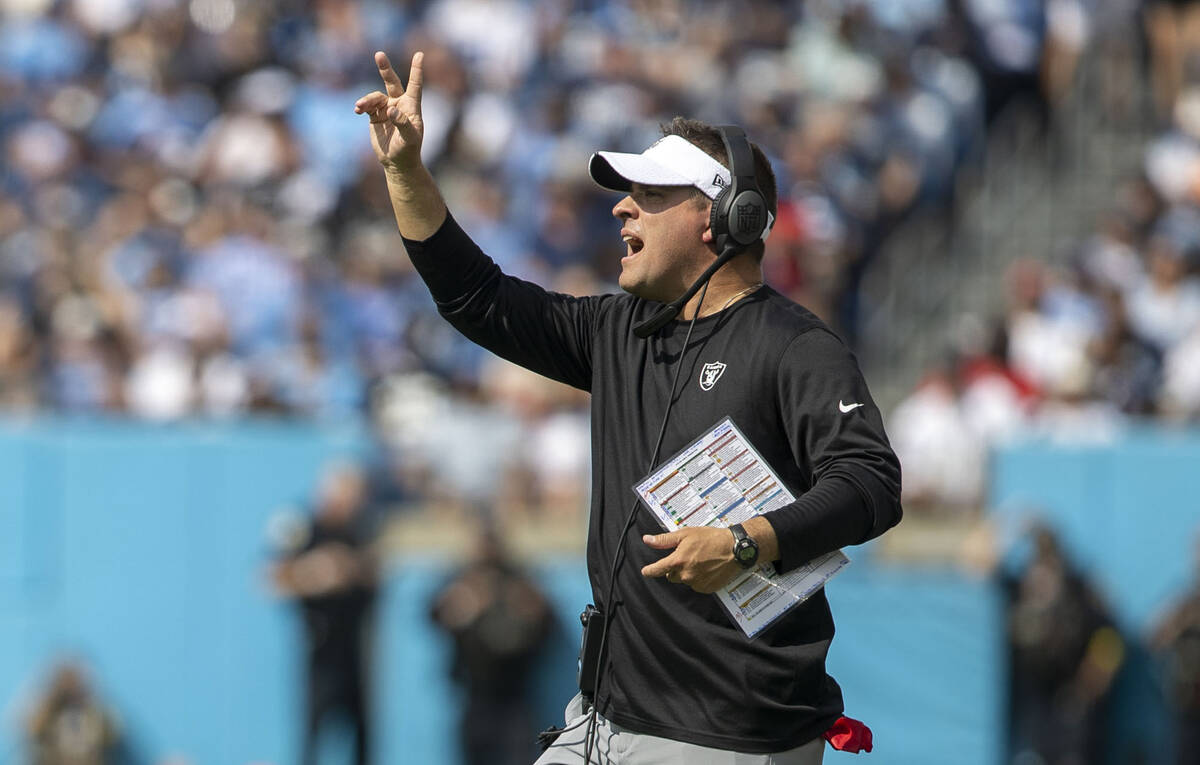 Raiders head coach Josh McDaniels holds up two fingers as he walks on the field during the second half of an NFL game against the Tennessee Titans at Nissan Stadium on Sunday, Sept. 25, 2022, in Nashville, Tenn. (Heidi Fang/Las Vegas Review-Journal) @HeidiFang 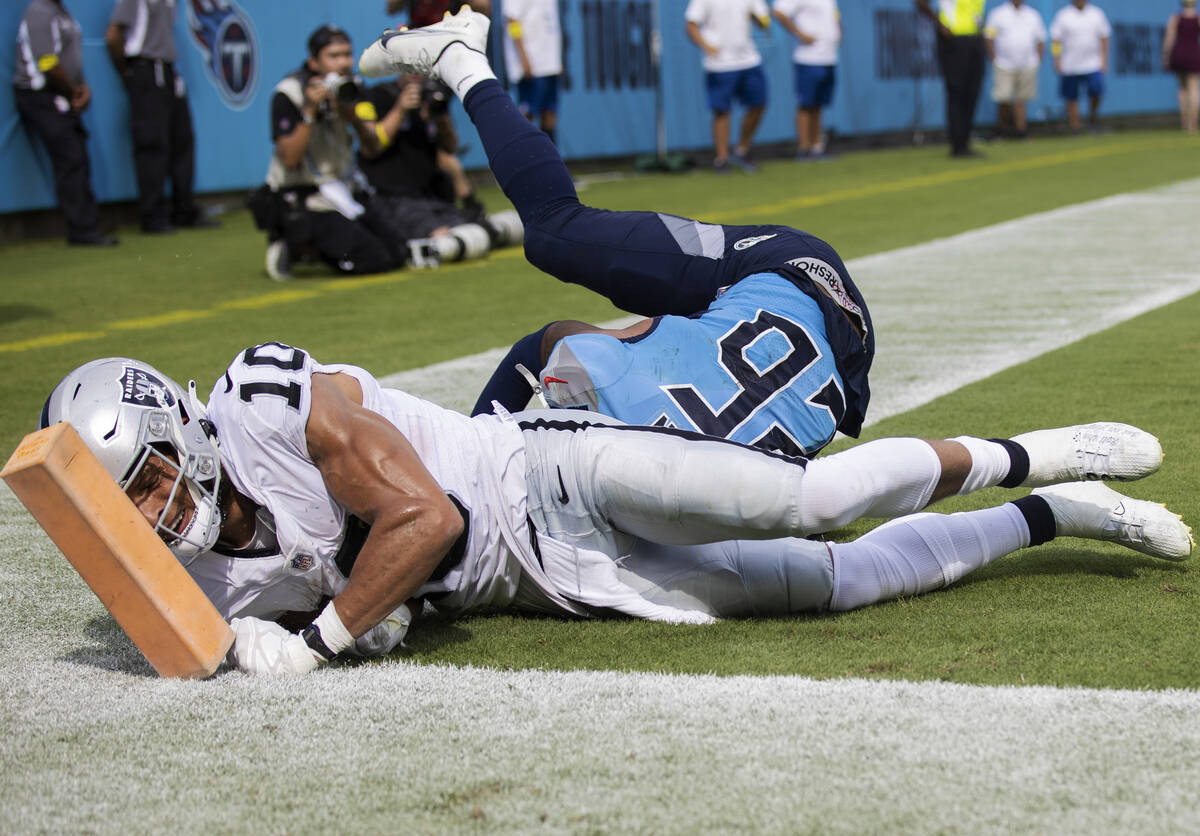 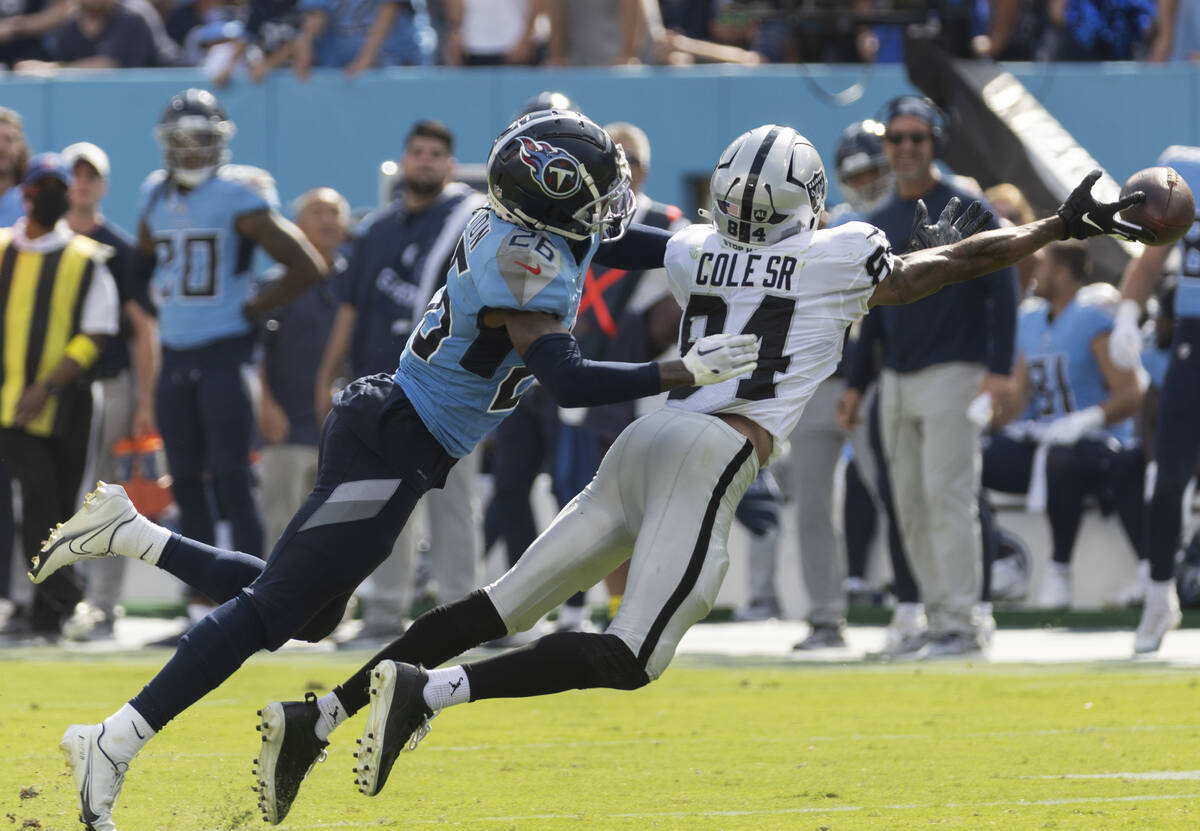 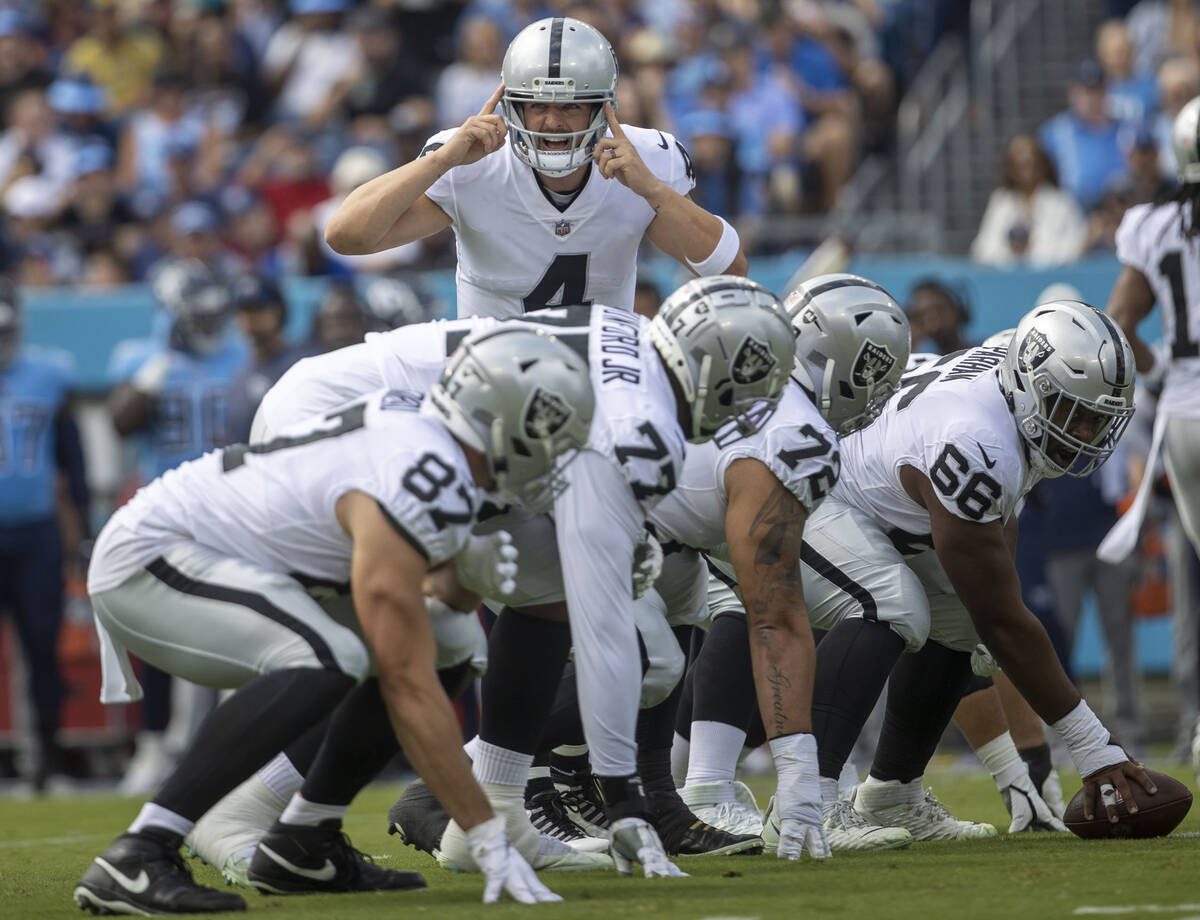 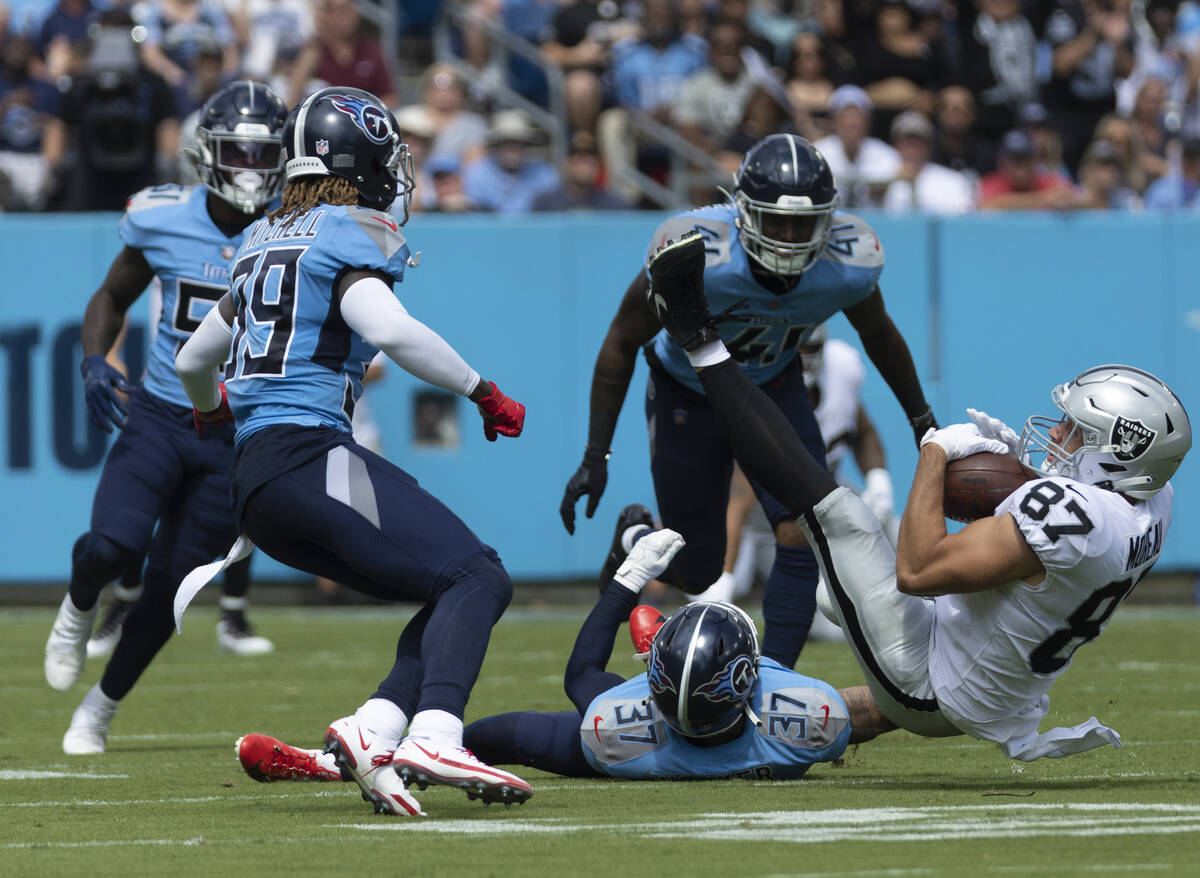 NASHVILLE, Tenn. — They stood there in a deathly quiet locker room, one by one, searching for answers.

Few came among the sweaty silence.

With their season firmly on the brink after just three games, the Raiders tried making sense of it all.

Here’s the reality: They deserve every bit of 0-3.

They haven’t done so and paid for it again Sunday, a 24-22 loss to the Tennessee Titans at Nissan Stadium.

It was easily the most undisciplined we have seen of coach Josh McDaniels’ team, a sloppy effort in a game that probably shouldn’t have been as close as the final margin.

“Both frustrated and angry,” wide receiver Davante Adams said. “We’re not naive enough to think anyone is going to lie down and give us a victory. I said from the beginning — just because we look good on paper doesn’t mean we’re going to be a great team. Frustration is OK, as long as you do something about it. Stay the course and keep grinding.”

You can’t win if you’re not ready to play. You can’t allow what was an awful Titans offense after two games to score three touchdowns on the first three drives.

McDaniels needs to take some serious blame here. His team lacked an attention to detail. The penalties in key moments.

The inability to make a play when needed most.

He’s 1-10 in his past 11 games as an NFL coach dating to his time with the Denver Broncos.

The Raiders were 1 of 12 on third down. They were 2 of 6 inside the red zone. The overall execution was spotty at best. Oh, yeah: They’re also the NFL’s only 0-3 team.

“Losing gets old fast,” McDaniels said. “This league requires a lot of mental toughness, and nobody likes losing. You know what I mean? I know it should hurt when we lose. We all feel (bleep).

“We want to try to do better and put our best foot forward. But the only way to do that is to come back in and work hard at it and try to put together another good week and try to go out there and earn a victory on Sunday (against Denver). That’s it.”

It’s a lot more for a team that has been outscored 53-25 in its past six quarters.

Or, well, the odds of Bishop Gorman not being good at football.

But there is also this: The Raiders lost five of six last season before ending with four straight wins and earning a postseason berth.

A sliver of optimism? Of light inside what is a dark tunnel? A good sign that the AFC West doesn’t appear to be the world-beaters most forecast?

You can say there are 14 games remaining, that all is not lost when so many opportunities exist. That the miscues discovered in these first three defeats are fixable.

But the Raiders haven’t proven they can play 60 minutes of sound football. They have blown big leads and twice tried to rally before coming up short.

They have been dominant for six quarters and dominated the other six.

“On the outside, it’s frustrating,” defensive end Maxx Crosby said. “I get it. But it’s frustrating in here. Even though it seems like the world is closing in on us, we have positive things to take from. You’re either going to sink or swim. There are no other options.”

They’re treading water, heads barely above the surface, waves crashing down, an 0-3 team that deserves every bit of such a fate.

Three losses later, the Raiders are still figuring out how.

They better. Fast. Season on the brink, is right.