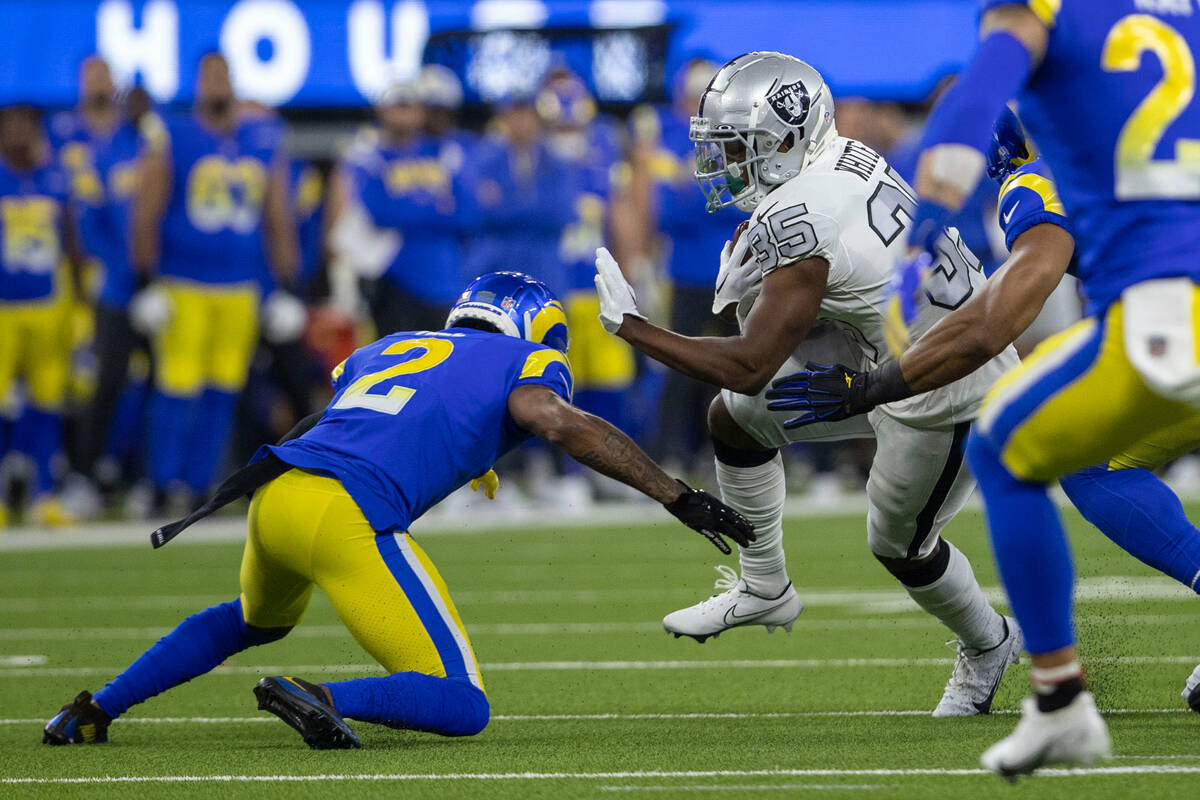 Raiders running back Zamir White (35) looks for room to run during the first half of an NFL game against the Los Angeles Rams at SoFi Stadium on Thursday, Dec. 8, 2022, in Inglewood, Calif. (Heidi Fang/Las Vegas Review-Journal) @HeidiFang 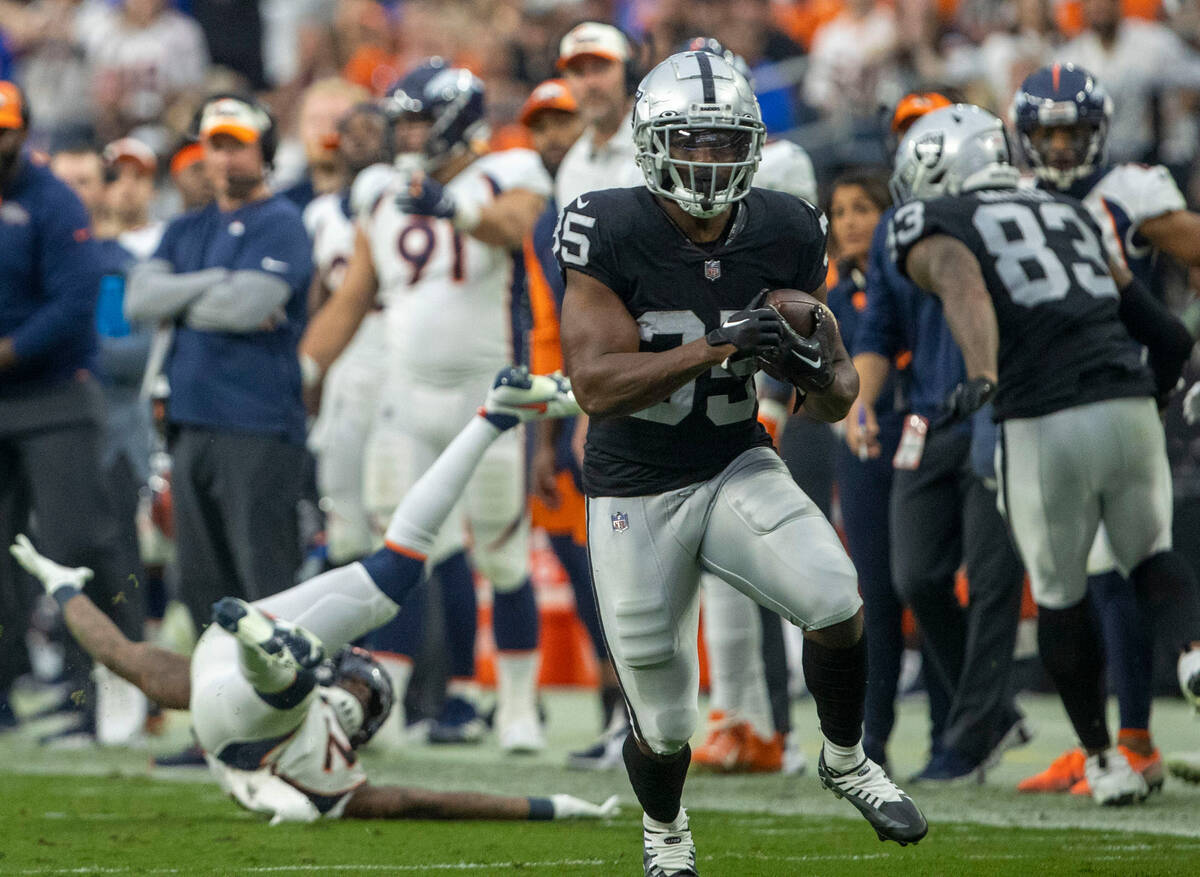 Raiders running back Zamir White (35) trips up Denver Broncos safety Kareem Jackson (22) as he breaks free on a run during the second half of an NFL game at Allegiant Stadium on Sunday, Oct. 2, 2022, in Las Vegas. (Heidi Fang/Las Vegas Review-Journal) @HeidiFang 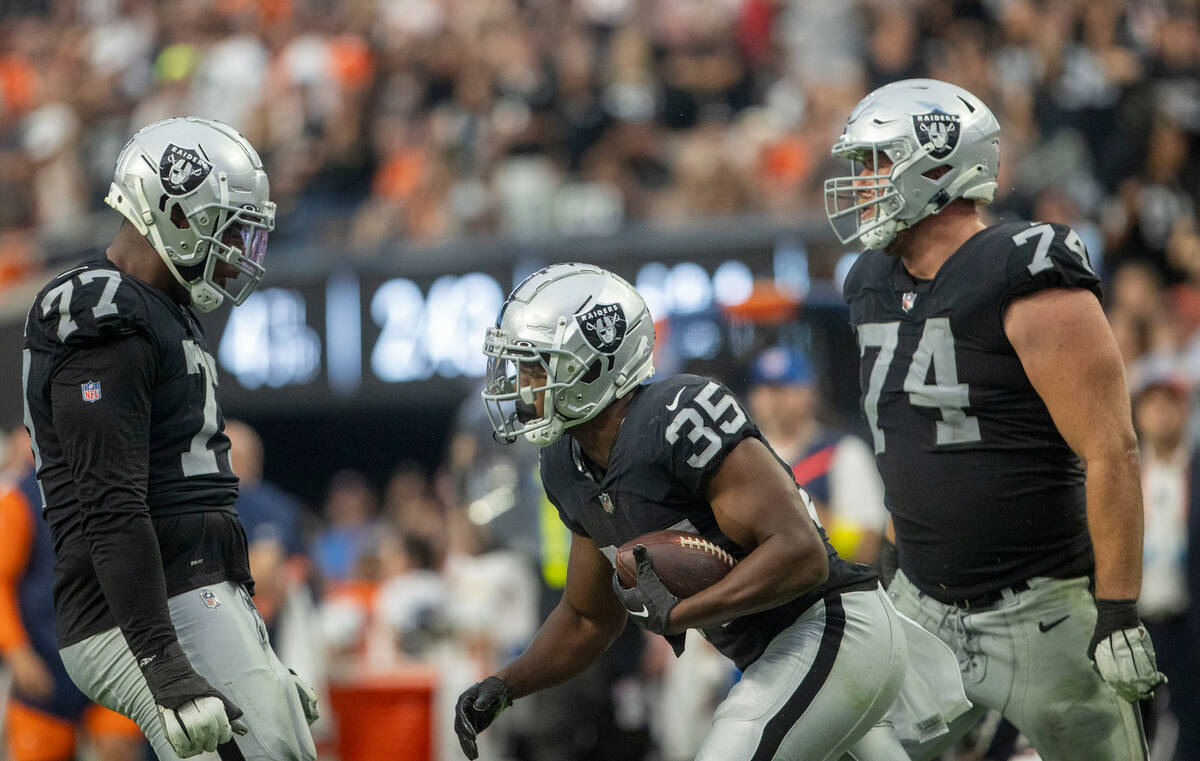 Raiders running back Zamir White (35) celebrates a big run with offensive tackles Thayer Munford Jr. (77) and Kolton Miller (74) during the second half of an NFL game at Allegiant Stadium on Sunday, Oct. 2, 2022, in Las Vegas. (Heidi Fang/Las Vegas Review-Journal) @HeidiFang 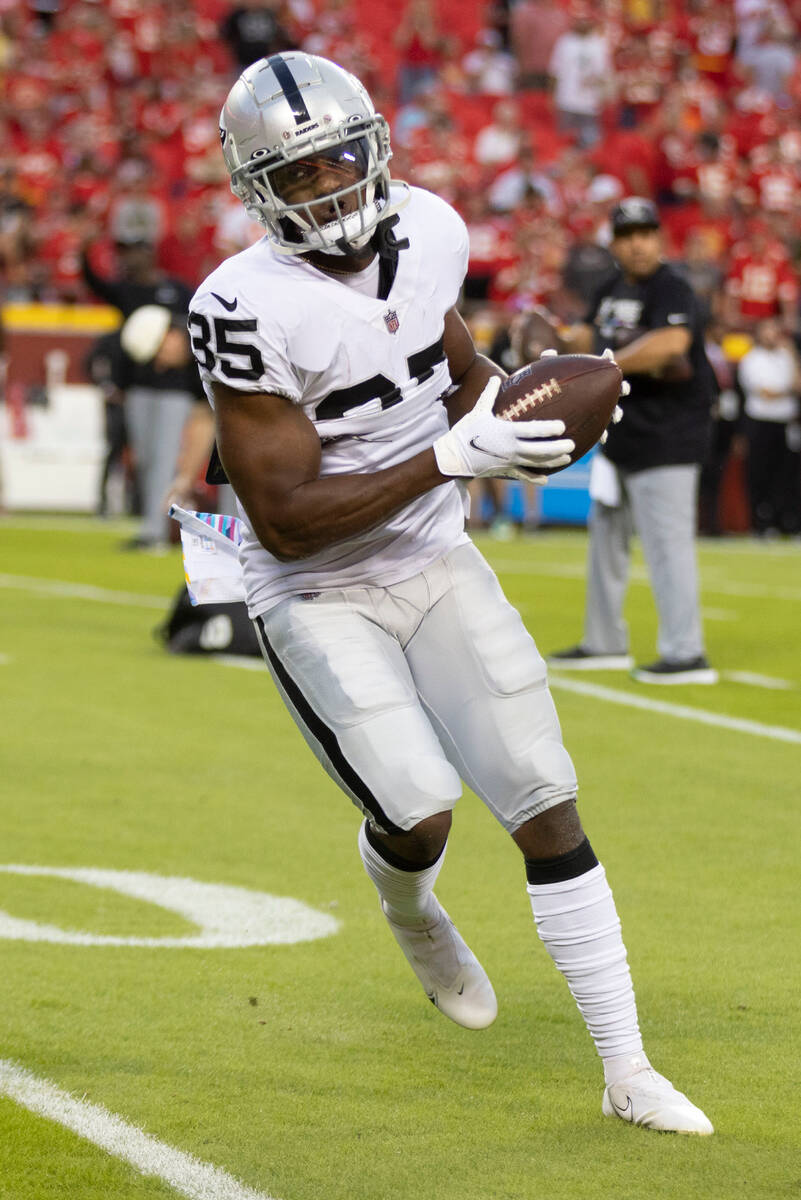 He couldn’t in a few hundred football fields have predicted the career season put together by Raiders running back Josh Jacobs, whose production is one bright spot in an otherwise forgettable 6-9 season.

White, however, is different. The rookie spent this season as one of a handful of backups to Jacobs. Spent it watching.

White — the guy they call Zeus — has just 16 carries for 66 yards for a team that meets San Francisco on Sunday at Allegiant Stadium.

You have to believe the Raiders thought White would see more work than he has when drafting him in the fourth round out of Georgia. He had led the Bulldogs in rushing each of the previous two seasons.

That, and it was thought new coach Josh McDaniels would arrive having preferred a running back by committee approach similar to the one employed in New England when he coordinated its offense.

But then the season began, and Jacobs — who leads the NFL in rushing with 1,539 yards — went wild and everything changed.

It meant White’s learning curve would be more resigned to heeding the advice of others about how best to succeed in the NFL. To picking the brain of Jacobs on a daily basis. To begin understanding things without actually experiencing them.

“Zamir is very athletic and has all the attributes you look for in a great running back,” Jacobs said. “Power, speed, blocking. I think it’s easier for a young guy to come in at the highest level and sit back and learn.

“But that second year — it’s like, ‘What’s next? I’m ready to get my feet wet.’ It’s going to be interesting to see how we use him in the future.”

It’s interesting that Jacobs spoke in such a tense.

The Raiders didn’t pick up his fifth-year option, meaning there are several ways things could go in the offseason. If Jacobs returns, a player such as White could essentially find himself in a similar role. If, for whatever reason, Jacobs departs, a certain second-year back could suddenly be challenging for a starting role.

Remember: The Raiders traded up to take White at No. 122 overall.

Remember also his story: White was given 14 days to live when born with a cleft lip and cleft palate. He then developed a leak in his kidneys and had another surgery for a hernia. There were other procedures throughout his youth. He spent the first three months of his life in a hospital.

He also suffered a torn ACL in each knee — one as a senior in high school and another before his freshman season in Athens.

“First of all, he’s a very mature young man,” McDaniels said. “He’s been as much of a professional as you can be when you’re a young guy like this in your first year. I’ve been through this many, many times where a back comes in and doesn’t necessarily play early, but has an opportunity to see something in front of him for a year.

“Obviously there’s a player in front of him that’s having an extremely good season, and hopefully (White) is soaking in everything he can. I know he practices well. He prepares hard, and when his time comes, he’ll be ready. We like the player.”

McDaniels talks about what White has seen the most — all the work, all the effort, all the study, all the preparation, all the practice, all the rehab and recovery — that goes into being a productive back in the NFL. It’s not an easy position to play. You take lots and lots of hits.

White gets how difficult the league is. How talented one must be. How nothing is given to anyone.

“Just having fun and continuing to grind and learn as much as possible from all these guys,” he said.

Just waiting his turn, is all.