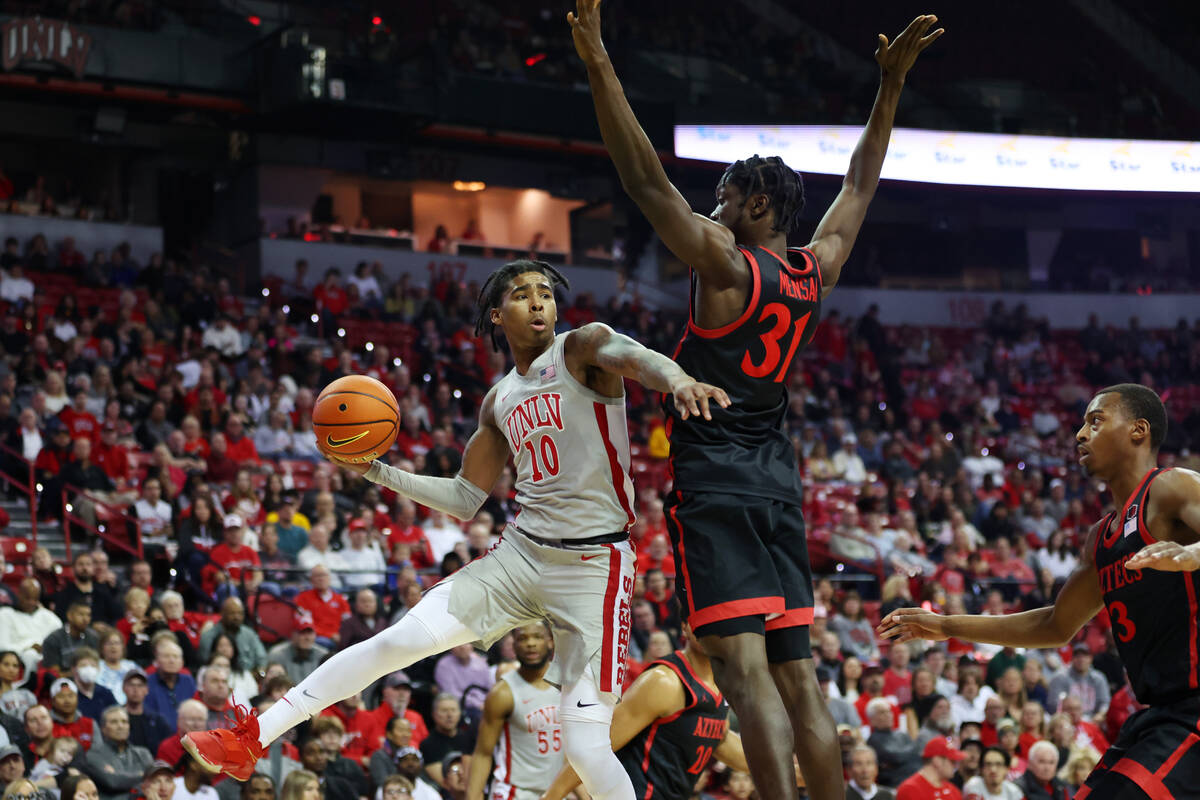 It was just the second game of a Mountain West basketball schedule for UNLV on Saturday, league play that’s earlier than breakfast before sunrise.

So it was hardly a must-win. Not even close.

It just seemed bigger than it was. Seemed like the Rebels needed a victory.

UNLV is now 0-2 in conference after opening with an overtime loss at San Jose State — which suddenly doesn’t look as bad with the Spartans winning at Colorado State — and this latest defeat.

It happened again because it always seems to happen — San Diego State taking out UNLV.

The Aztecs have won 20 of the last 22 meetings between the teams.

It was halftime at the Thomas &Mack Center when San Diego State led by 11. The Aztecs reached such an advantage by shooting 57.1 percent on 3s.

Few teams in the Mountain West — OK, pretty much anywhere — are beating them when that occurs. The Rebels discovered as much.

One thing that hasn’t changed is the elite level at which San Diego State defends. They’re as consistent at that end as all heck, as tough to score against as most anyone nationally.

Think about it: San Diego State had made 34.7 percent of its 3s coming in. UNLV could have dealt with that and owned a decent opportunity to win. Wasn’t to be.

“Any time you finish a game like that with San Diego State, you’re probably going to pat them on the back,” UNLV coach Kevin Kruger said. “They’re just so in sync (defensively), so solid. They don’t make mistakes. The plan is simple but not easy when you talk about trying to score on San Diego State, especially in the half court. It’s really tough.

“They cover for each other, fight and scrap for each other. They’re certainly as good as we’ve played this year and about as good (defensively) as anyone in the country — certainly from what I’ve seen.”

His team didn’t defend well at all in the first half and couldn’t make enough shots to overcome a deficit that at one point swelled to 14.

Fact: San Diego State had 22 turnovers and nine fewer shots than UNLV and still won by nine. That’s what defense gets you.

“You’re never happy when you lose,” said senior Luis Rodriguez, who scored a season-best 24. “We just have to stay connected. Lot of basketball to be played. Just stay together. We know who we are. We know the work we put in. We can’t feel sorry for ourselves. Just put our heads down and work harder.”

The (really) hard part: After taking the next week off, UNLV travels to New Mexico on Saturday.

That’s where what is an undefeated and 22nd-ranked Lobos side resides.

“We’ll get back after it Monday,” Kruger said. “We have to understand that this league doesn’t let up. There is no game where you can go in and say, ‘Guys, if we just play hard, we’ll be fine.’ There isn’t one of those.

“We can’t do just a lot of of good things right. We have to do as much as possible right. We have to be a little more locked in if we expect to beat — and I don’t think anyone would argue — the most confident team in the country right now in (New Mexico).”

They need to make shots and have their best players show up.

They need to remember this: Can’t defend for just 20 minutes and expect to win.