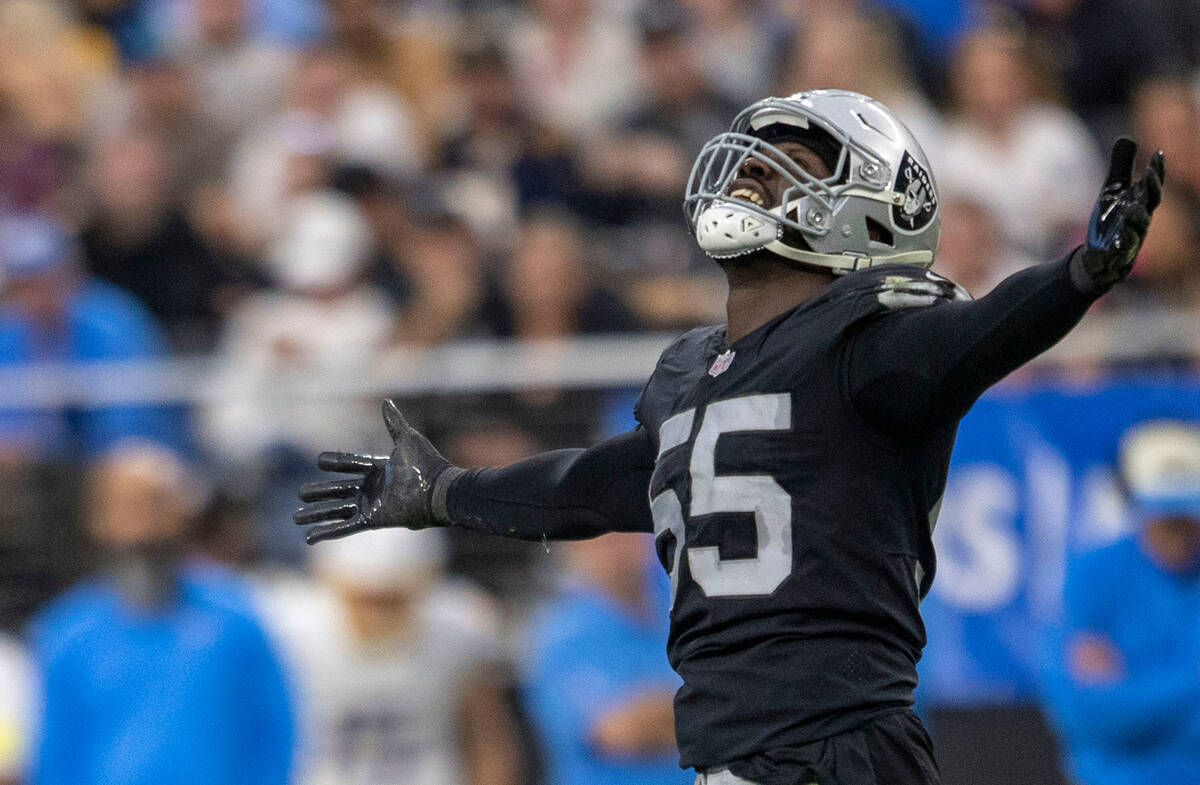 Raiders defensive end Chandler Jones (55) celebrates a sack during the first half of an NFL game against the Los Angeles Chargers at Allegiant Stadium on Sunday, Dec. 4, 2022, in Las Vegas. (Heidi Fang/Las Vegas Review-Journal) @HeidiFang 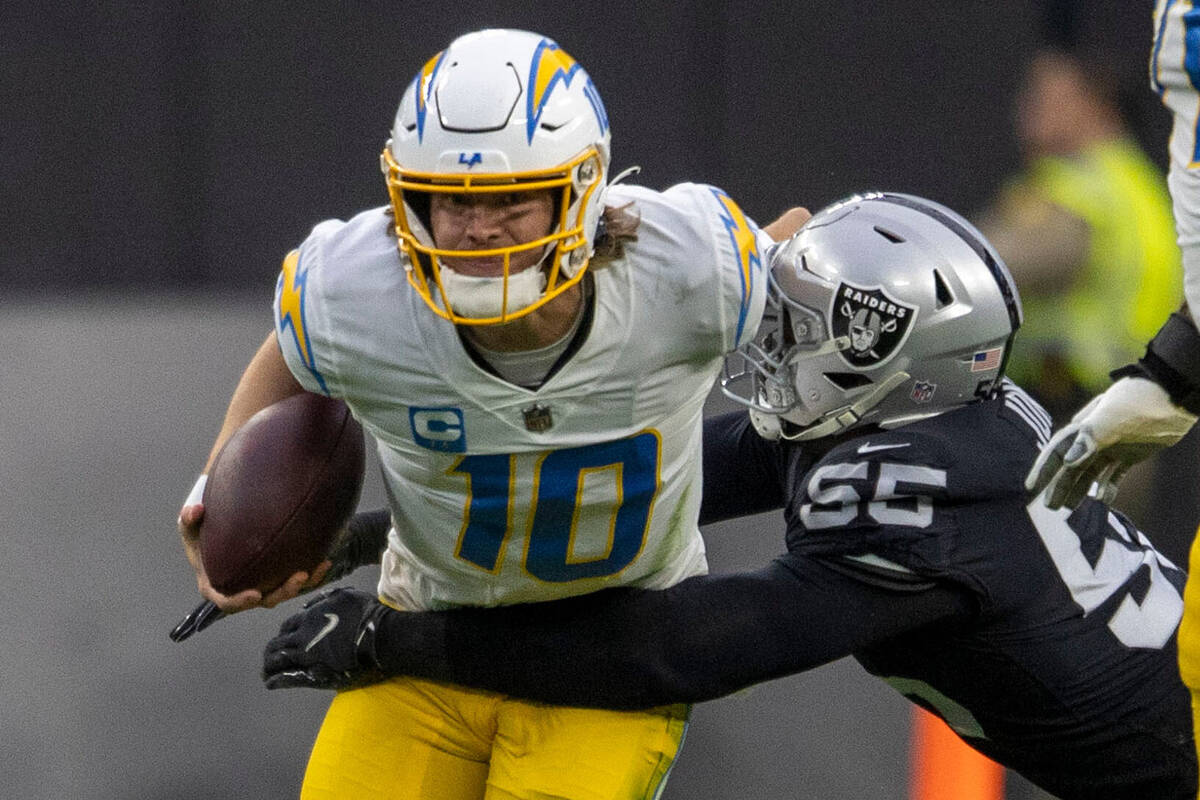 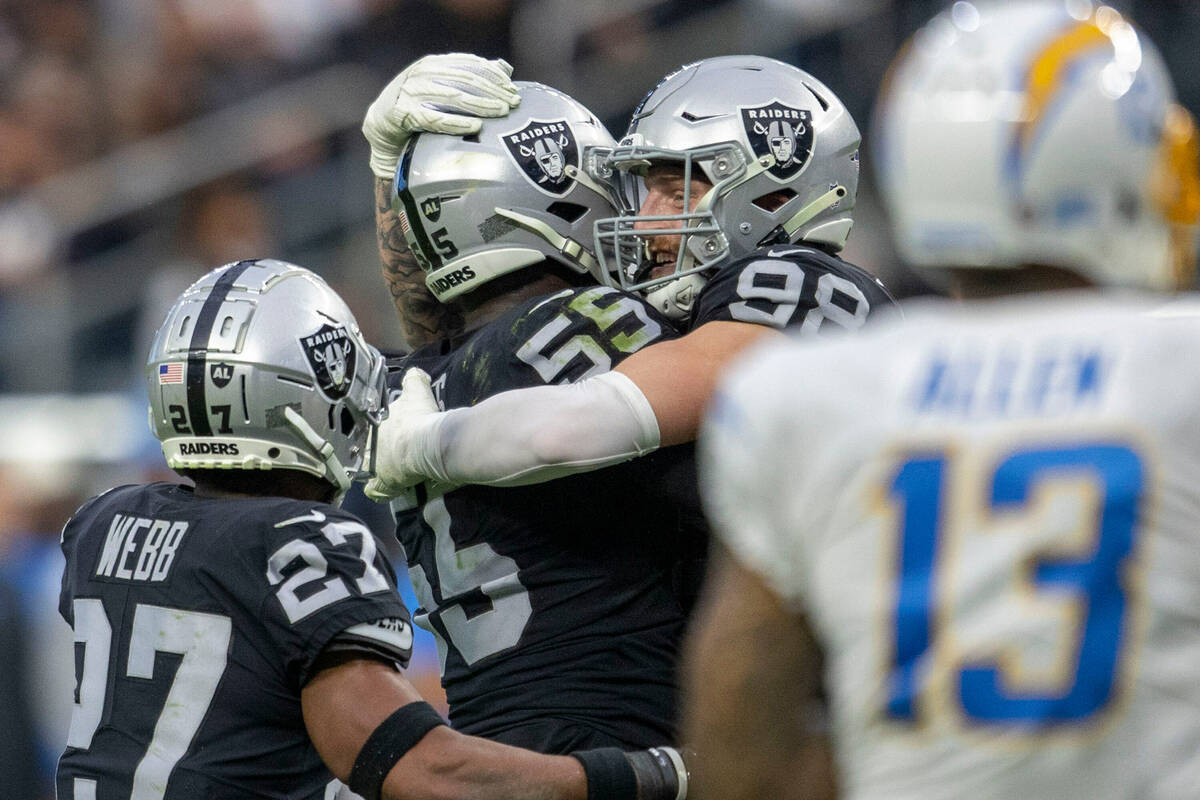 Raiders defensive end Chandler Jones (55) is embraced by Maxx Crosby (98) after securing a sack, as Raiders cornerback Sam Webb (27) looks on, during the first half of an NFL game against the Los Angeles Chargers at Allegiant Stadium on Sunday, Dec. 4, 2022, in Las Vegas. (Heidi Fang/Las Vegas Review-Journal) @HeidiFang 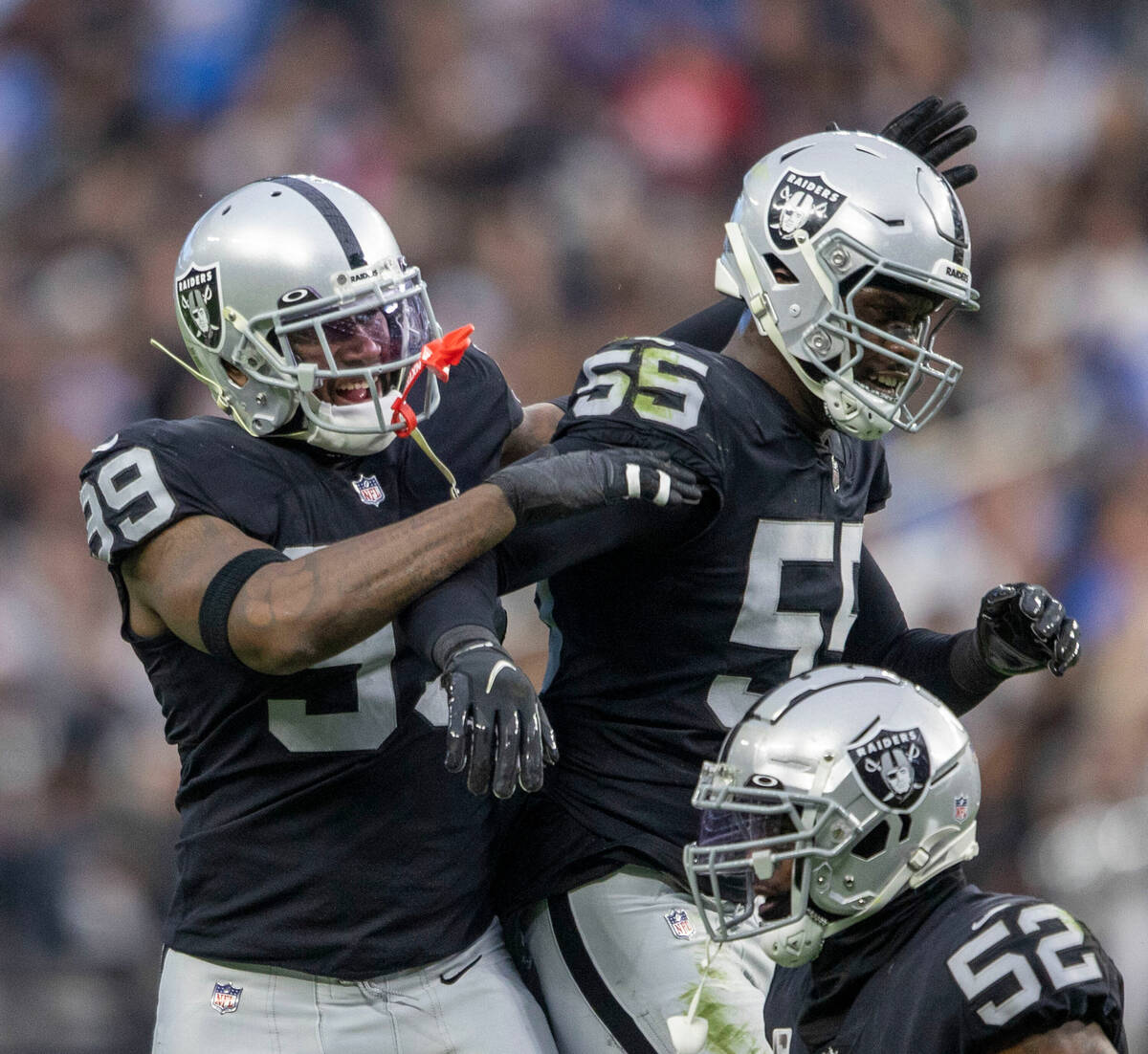 Raiders defensive end Clelin Ferrell (99) congratulates defensive end Chandler Jones (55) on his sack during the first half of an NFL game against the Los Angeles Chargers at Allegiant Stadium on Sunday, Dec. 4, 2022, in Las Vegas. (Heidi Fang/Las Vegas Review-Journal) @HeidiFang 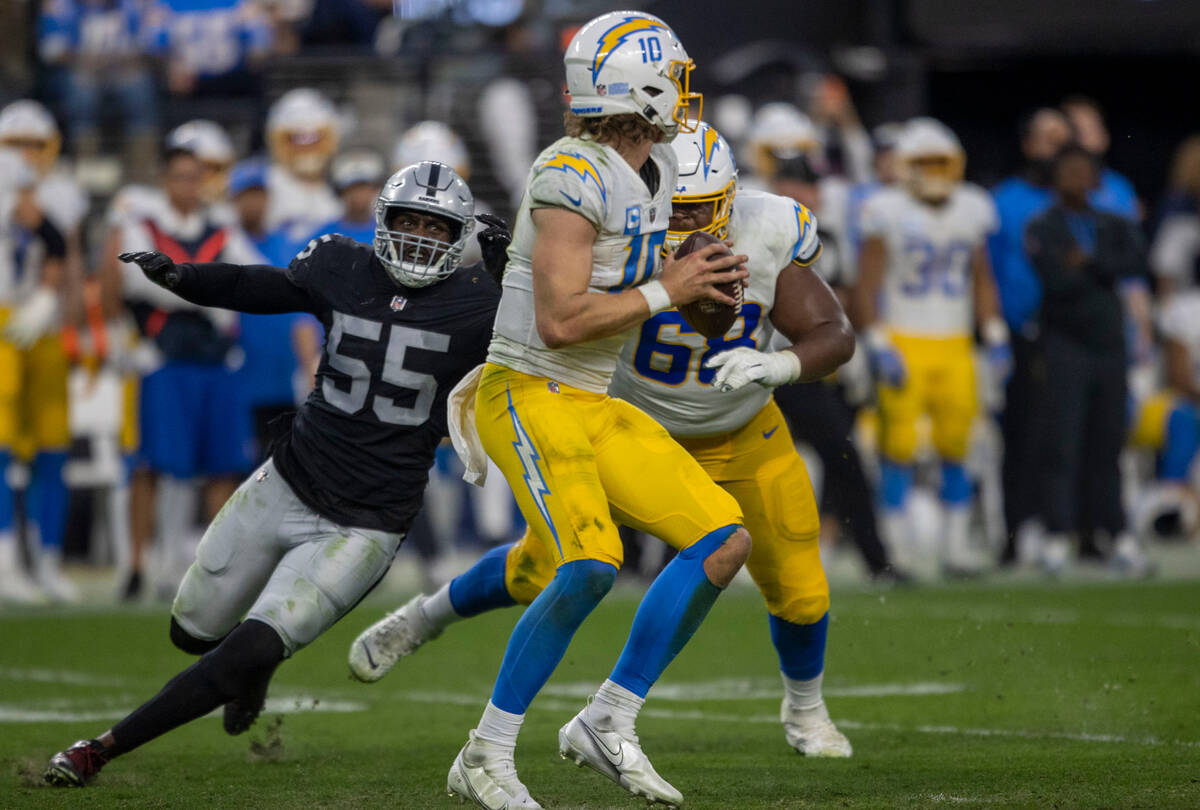 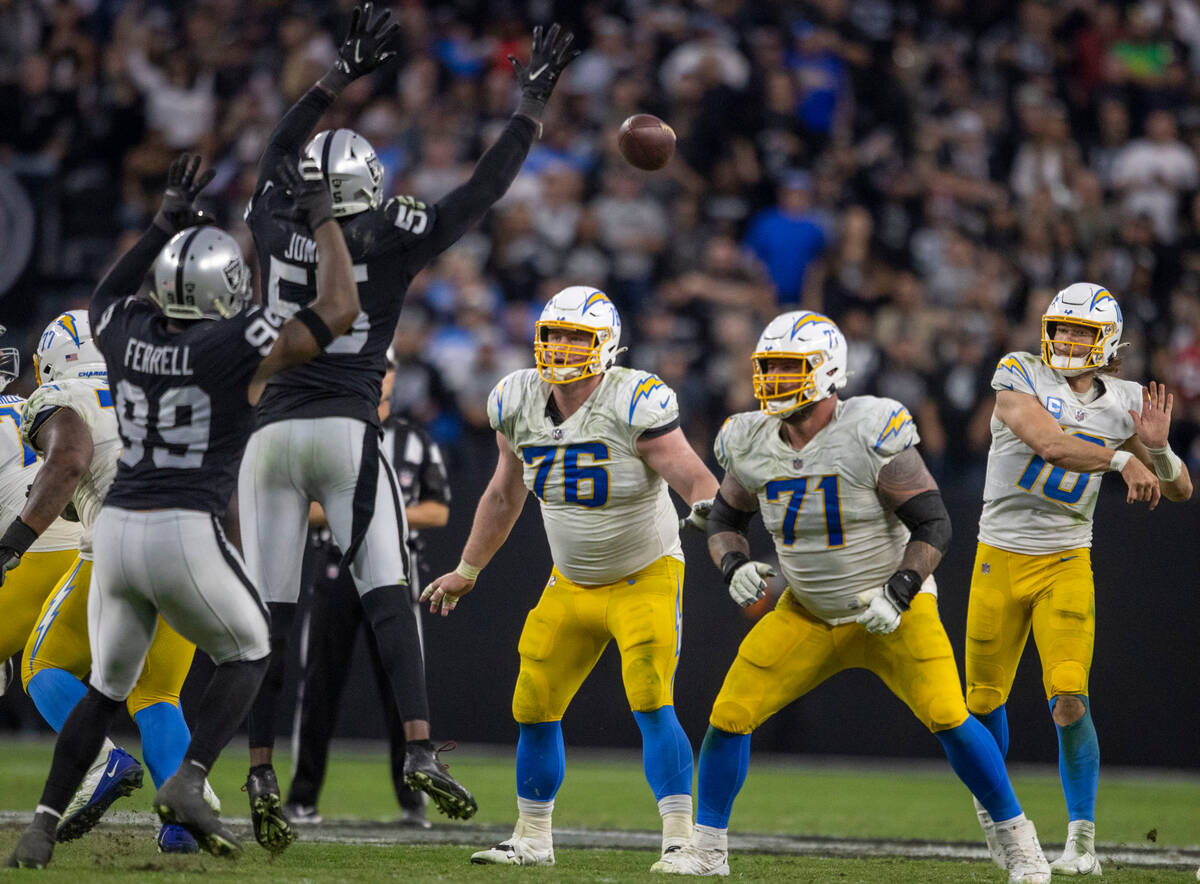 Raiders defensive end Chandler Jones (55) goes up to deflect a pass from Los Angeles Chargers quarterback Justin Herbert (10) during the second half of an NFL game at Allegiant Stadium on Sunday, Dec. 4, 2022, in Las Vegas. (Heidi Fang/Las Vegas Review-Journal) @HeidiFang

He used to care about it more. The numbers. The hype. The glory.

Used to chase such things.

Chandler Jones insists that’s all in the past, that he has reached a point in his career in which the final score is far more significant than those statistics attached to his resume.

This is the player everyone expected. The one who signed a three-year free-agent contract with the Raiders for $51 million — $32 million of it guaranteed. The one thought a perfect complement as an edge rusher opposite star Maxx Crosby.

The one with 111 career sacks and counting.

Jones on Sunday had by far his most productive outing while wearing the silver and black, totaling three sacks in a 27-20 win against the Chargers at Allegiant Stadium.

He also had five tackles, two tackles for loss and a pass defended.

He was active from the opening kick, abusing Chargers rookie tackle Jamaree Salyer all afternoon. It got silly on some plays, Salyer a sixth-round pick who had no answer for how to contain Jones.

The Chargers’ front is all sorts of beat up and missing key starters. Jones and the Raiders exposed it time and again.

It wasn’t the most relaxing day for Chargers quarterback Justin Herbert. He was sacked five times.

“Everybody has been giving (Jones) a hard time about the sack production,” Raiders safety Duron Harmon said. “But each and every game, he brings energy, he brings leadership. He has been affecting the game — he just hasn’t been able to get there. To see him do that today — I’m so happy for him.

“He affected the quarterback and made the coverage a lot easier for us. Hats off to him. We needed a big-time performance, and he came through.”

Jones had just half a sack in the first 11 games, his snap count being decreased some weeks as the search for more of an impact labored on.

But his coaches and teammates insisted there was more to his game than the amateur eye could decipher, that he was influencing things despite not getting home and compiling sacks.

They talked about his run defense, his presence, his motor. They stood behind him to a man.

“What y’all don’t know about Chan is that he brings that energy every day,” cornerback Nate Hobbs said. “Maxx might get all the love and all the publicity, the cameras, the stats, but Chan is there every game, too.”

Said Crosby: “(Jones) works his ass off and is a great teammate. It isn’t about him. It’s about the team. He shows that every day. Great attitude. For a guy with over 100 career sacks, you don’t see that often.”

They were all there Sunday, a front whose physicality proved too much for Herbert and the Chargers. Los Angeles rushed for 72 yards on 22 carries, a 3.3-yard average.

Jones is 32 and in his 11th year. He arrived in the offseason from Arizona, where he played six years after four with the Patriots.

He is a four-time Pro Bowler who finished with 10.5 sacks and 41 tackles and six forced fumbles last season, causing those on the Raiders’ side of the ledger to dream about the season he and Crosby might combine to produce.

Hasn’t worked out that way. Jones said he’s not frustrated, that he has come close often to sacks before quarterbacks have eluded his pressure. That it doesn’t encompass his every thought.

“No sigh of relief,” Jones said. “Early in my career, stats were a huge thing for me. But where I am now, it’s about winning. If I had zero sacks and we won, that would be huge.

“When I was younger, I worried about accolades. That’s when I cared about stats. Don’t get me wrong — it feels good to walk off the field with three sacks when I could have had five.

“The quarterbacks are starting to fall now. Hopefully, we can make this a week-by-week thing and turn those pressures and hits into sacks.”

He did so Sunday and the Raiders responded with their third straight win.

He did what has been expected all along.