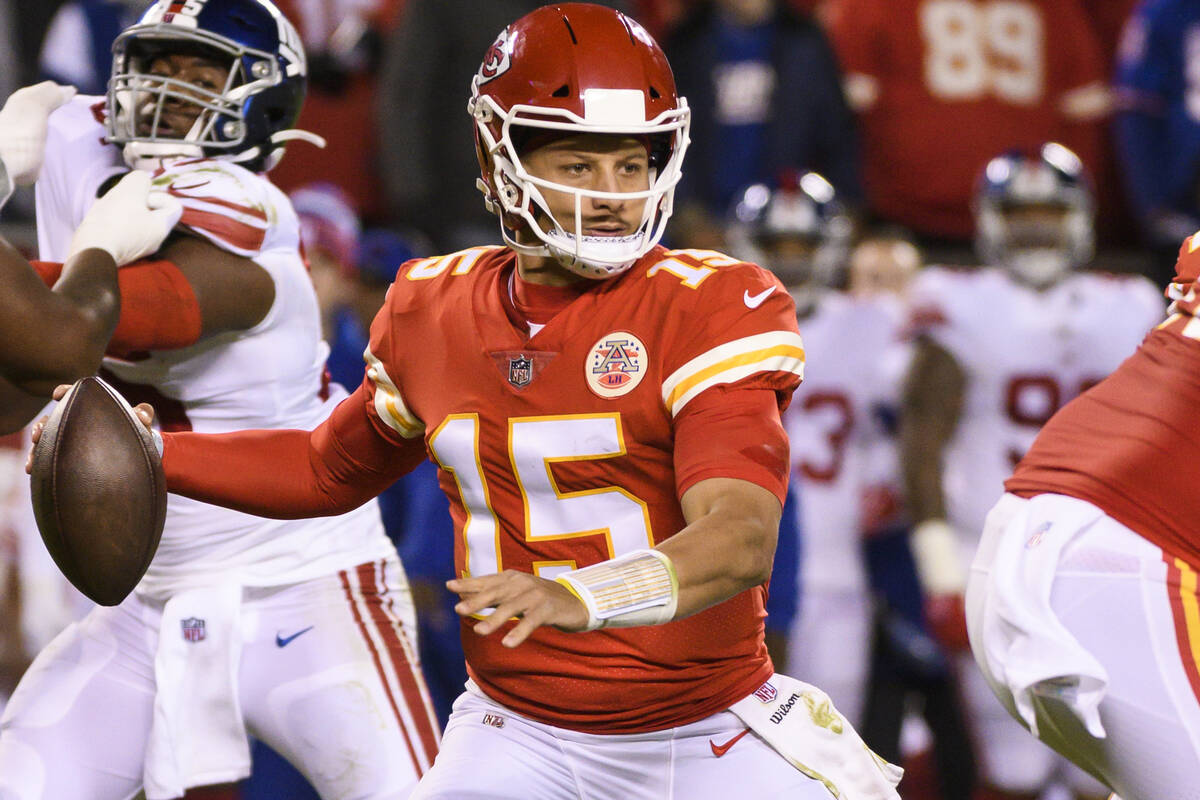 Kansas City Chiefs quarterback Patrick Mahomes (15) scrambles away from pressure during the first half of an NFL football game against the New York Giants, Monday, Nov. 1, 2021 in Kansas City, Mo. (AP Photo/Reed Hoffmann)

It’s like watching a horror film on the edge of your seat, not knowing when you will set a personal record for the vertical leap, yet understanding it will occur.

Suddenly, that small, lizard-like creature from “Alien” is going to burst through Kane’s chest and scramble away.

The Raiders hope it’s not Sunday.

For all their defensive flaws and quarterback Patrick Mahomes not resembling his high-powered self, the Chiefs are still 5-4 and just one-half game out of the AFC West lead.

It faces the Raiders in prime time at Allegiant Stadium and — here comes a standard line from the hosts — you need to prepare for the team that has won five straight division titles and not one that lost 27-3 to Tennessee.

Fact: The Raiders could play extremely well Sunday — and they better play a whole lot better than in a 23-16 loss to the Giants last week — and still lose.

When will the real Chiefs stand up? Or is this really them?

Kansas City’s defense has been woeful, but you can’t begin any conversation about the Chiefs and not start with Mahomes.

Repeating the original premise: You don’t want to be the opponent on a week he figures things out. History is pretty clear. At some point, he’ll likely discover a consistently frightening rhythm.

Eventually, the skills no other NFL quarterback owns will rear their spectacular head. Maybe. Probably. Nobody is totally sure.

“I just think a lot of plays they made last year aren’t going their way right now,” said Raiders defensive tackle Quinton Jefferson. “But they can still put up points any time they want. Sometimes, guys have an off year. I still think they have great play-makers. I know we’re going to have to come with our ‘A’ game or it’s going to be a long day.

Mahomes’ magical execution in recent seasons when leading the offense has always overcome any failures by the defense. That’s why the bar is set so high for him.

But that hasn’t been the case for most of this season. So it’s no surprise the armchair football psychologists are weighing in on whether the league has finally caught up to him.

It’s the play-calling. It’s the lack of a third legitimate offensive option. It’s that defenses are scheming in a way that doesn’t allow Mahomes to use his instinctual gifts as much. It’s the offensive line. It’s the way others are taking speedy wide receiver Tyreek Hill and tight end Travis Kelce out of plays.

There are countless reasons being offered.

Mahomes still ranks fourth among NFL quarterbacks with an average of 286.1 yards passing. But he’s 19th in rating (92.5) and 22nd in completion percentage (65.2). He threw 11 interceptions over the last two seasons. He already has 10 this year.

“The film we watch is that the Chiefs are an explosive, fast football team with dynamic personnel,” said Raiders coach Rich Bisaccia. “They can score from anywhere on the field. They’re extremely well coached and a physical, tackling defense. What we see is a really good football team. We’ll be excited to play them come Sunday night.”

What they see, then, is what everyone expected of Kansas City this season and yet what hasn’t been.

But if the former arrives Sunday, setting a personal record in the vertical leap won’t be a good thing for the Raiders.